Ukraine: A Book of Essays by Intellectuals in English

October 3, 2019
On October 1st, Ukrainian President Volodymyr Zelensky announced that Ukraine has agreed to the so-called “Steinmeier formula”. This formula is a point of one of the hottest debates in Ukraine; it raises fears that it latently leads to Ukraine’s “capitulation” to Russia on occupied Donbas lands. 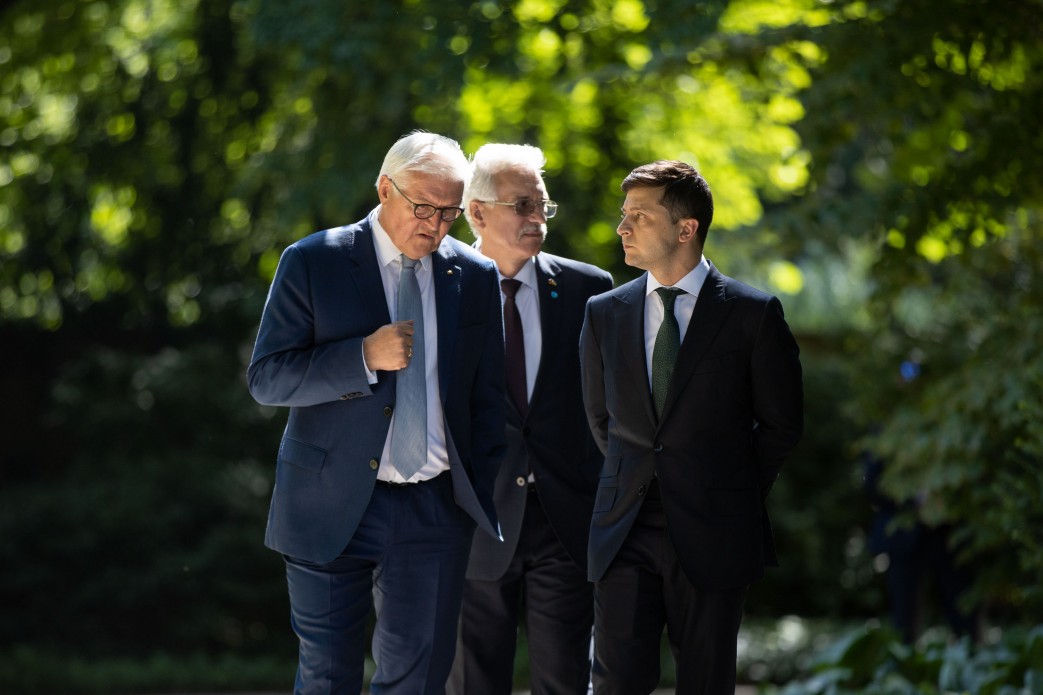 The formula, as it is presented by Ukrainian officials, makes a link between the would-be "local election" on occupied territories, and the "special status" of now occupied lands in Eastern Ukraine after their re-integration. According to Ukrainian officials, the formula  states that the law on special status will be applied temporarily when the local election starts, and permanently once they are evaluated as free and democratic by the OSCE.

The formula  states that the law on special status will be applied temporarily when the local election starts, and permanently once they are evaluated as free and democratic by the OSCE

Critics of Zelensky say that accepting this formula will legitimize the pro-Russian regime on the occupied territories, which Ukraine considers "terrorist" and Putin's proxies. Holding elections without prior de-occupation, transitional justice and a non-Russian (Ukrainian or international) administration will make current pro-Russian forces clear winners at the ballot box. The "special status" will grant them "special" powers, with little control by Kyiv and with Moscow's legitimized enclave inside the Ukrainian state.

Let's look at what happened and what the consequences might be.

Bringing the "Steinmeier formula", and, in general, the topic of election on occupied lands, into the Ukrainian political debate may be a consequence of the long-discussed prisoners' swap.

In September, 35 Ukrainian citizens, kept hostage in Russian prisons, returned home, to the joy of Ukrainians.

However, in order to ensure this swap Zelensky could have agreed to a political compromise. It could involve agreeing on Russia's condition that Ukraine should turn to the "political" side of the Minsk agreements, including ensuring the "special status" for now occupied lands, and speedy elections on these lands.

The previous president, Petro Poroshenko, stressed that in order to go to the "political part" of the Minsk deal, it is crucial to ensure its security part, i.e. a long-lasting ceasefire, and possibly transitional administration, international peacekeepers, etc. This sounds logical: no genuine election can be held on lands which are occupied or militarized. Russia, however, behaved in the last few years as though it tried to make clear that it will not stop shooting unless Ukraine implements the "political part".

While during Poroshenko's rule, the ball was considered to be on Moscow's side, now with the "election" idea, it seems to return to Kyiv. The trap in the "Steinmeier formula" is that it puts responsibility on implementing Minsk more on Ukraine, than on Russia or the separatists.

The trap in the "Steinmeier formula" is that it puts responsibility on implementing Minsk more on Ukraine, than on Russia or the separatists.

Minsk agreements could be read as "coercion to peace". That is, Russia's attempt to ensure peace on its terms. Minsk-2 (signed in February 2015) says, for example, that Ukraine can proceed to regaining control over the Ukrainian-Russian border only after the election on these lands is held. Of course, this means elections will be made purely on Russian terms and with Russian winners.

Ukraine now seems to be proposing another interpretation. If an election should be held according to international standards and Ukrainian legislation, it should first involve Ukraine's administration entering the occupied territories, the withdrawal of Russian troops and, thus, Ukraine regaining control over the border. This is what Zelensky clearly said yesterday at a briefing: "the border should be ours". Of course, pro-Russian separatists immediately denied that they will let this happen.

All this creates new ambiguities and new controversies that can put the new plan into question.

First, if Ukraine holds a "local" election in accordance with Ukrainian legislation, this should mean that the pro-Russian non-recognized quasi-states, the so-called "DPR" and "LPR", should first be dismantled. Their state structures (heads of states, ministries, security structures, army, law-enforcement, etc.) should cease to exist prior to the holding of the election; instead, Ukrainian institutions (courts, police, national guard, etc.) should enter these lands and organize the vote. Will Russia, pro-Russian separatists or Russian nationalists really agree that this "statehood" should be sacrificed so easily?

Second, the question is whether only pan-Ukrainian parties can participate in the election, or will "regional" parties too. If "regional" parties are allowed, this can, indeed, lead to legitimization of the current "leaders" of the pro-Russian "republics".

Third, if Ukrainian IDP voters, observers, media, activists, politicians, are to be involved in the elections, they should be protected - and they can hardly be protected by the occupying authorities.

Fourth, a big question is what can the mechanism be to check that Ukraine indeed "controls the border", and that Russian troops have left occupied lands, and did not stay "invisible" as they usually do?

In short, this process could face another set of very difficult questions and controversies. Much will depend on the new "special status" law that, as Zelensky announced, Ukraine might adopt by the end of the year. This law will, in many aspects, define whether Zelensky is really keen to move too fast, risking to accept Russian conditions without thinking of possibly disastrous consequences. Or will Ukraine set its own conditions, which will invite Moscow to implement its own part of the compromise (which Moscow rarely does).

There is no such thing as the "Ukraine conflict". There is Russian aggression, which masks itself in a Ukrainian "internal conflict".

In this context, international audience needs to remember that there is no such thing as the "Ukraine conflict". There is Russian aggression, which masks itself in a Ukrainian "internal conflict". The solution to it should never be to leave Ukraine facing Russia alone. If Ukraine is left alone, this will untie Russia's hands to pursue its strategy of "coercion to peace", with the aim of bringing Ukraine back into the Russian sphere of influence and undermine its sovereignty and pro-democratic vector. It will also instigate it to move further and test its occupation of Ukraine or tactics of interference in other parts of the world.

Volodymyr Yermolenko
a Ukrainian philosopher and journalist, editor in chief at UkraineWorld.org, analytics director at Internews Ukraine
Next article

Chancellor Merkel is preparing to step down after a decade and a half in power. What will her departure mean for German policy towards Ukraine and Russia?
VIDEO
July 2, 2019