September 23, 2020
Anti-Western propaganda is typical for Putinist Russia. But over the past few years, it has also been massively proliferating in Ukraine. 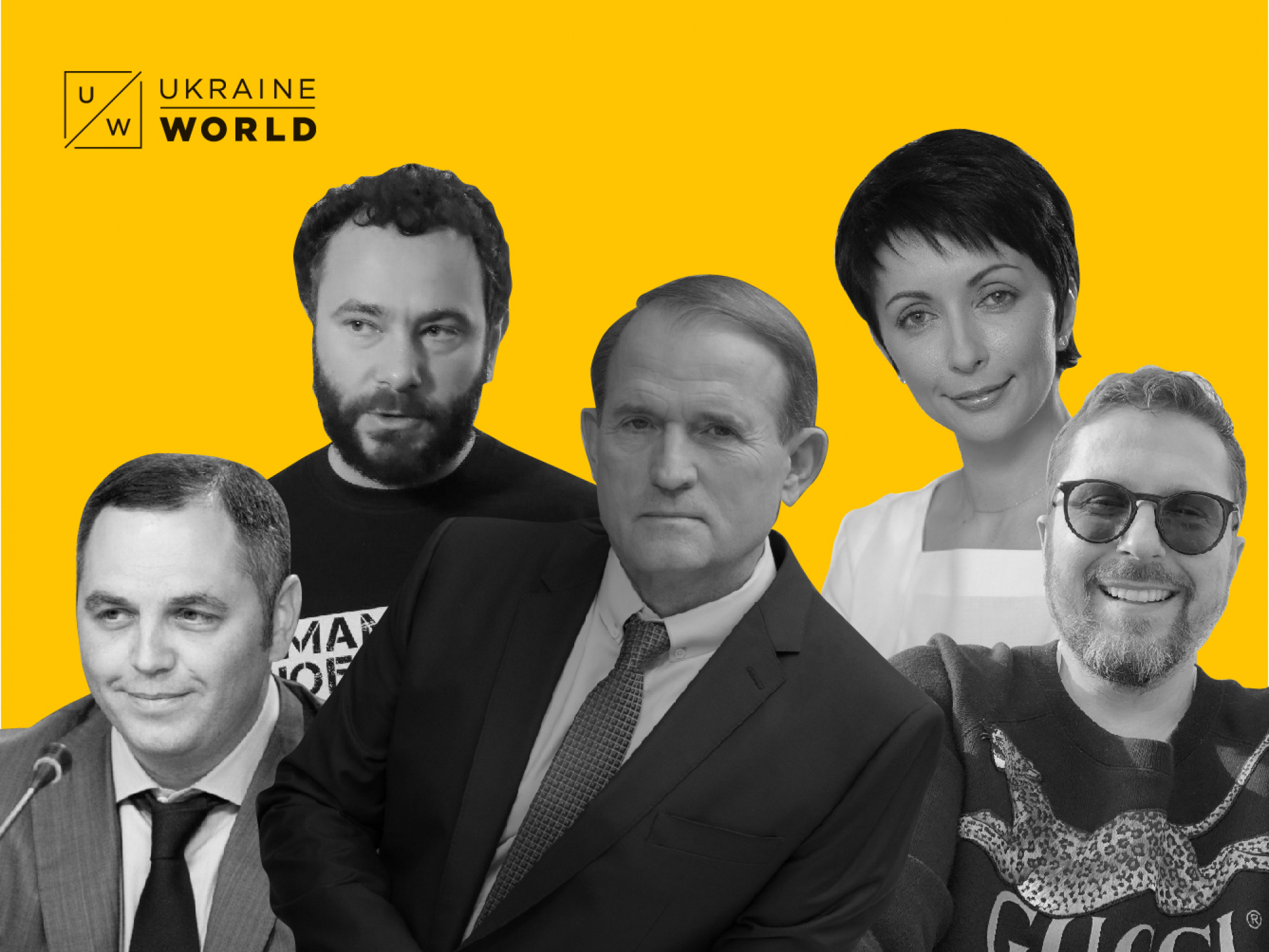 UkraineWorld.org regularly studies the narratives and practices of anti-Western actors in Ukraine in reports which you can follow on the UkraineWorld website. These actors, linked to pro-Russian parties and Ukrainian oligarchs, broadcast the narrative that Ukraine is under the 'external governance' of the West, and that it should break free from the control of the IMF", Soros, America, Bill Gates, and other supposedly malign Western actors. They also work hard to discredit Ukraine's pro-European reforms.

To promote their narratives, anti-Western actors in Ukraine are actively using the concerted actions of troll armies. These troll armies massively retweet their content, thus multiplying their messages and making them more visible on social networks.

In this study, we dig into these actors' concerted (dis)information behaviour and reveal networks of fake fans -- those 'ordinary soldiers' which pro-Russian and anti-Western actors are using in their information warfare against Europe, the US, the IMF, and Ukraine's sovereignty.

Anatoliy Shariy is a popular blogger and politician. He is the head of the "Party of Shariy", whose popularity has been increasing in Ukraine. He has heavily criticized the Euromaidan of 2013-2014 and Ukraine's post-2014 authorities. UkraineWorld often tracks his messages in the chorus of Ukrainian anti-Western actors.

In our study, we find that Shariy is likely to be massively using pro-Russian or Russia-based trolls. His tweets are often shared by accounts which tweet (mostly re-tweet) pro-Russian, pro-Putin and anti-Western content.

We analyzed 200 accounts among Shariy's recent followers (as of July 2020) with the help of Botometer, an online service helping to identify possible trolls/bots.

Out of these 200 accounts of Shariy's recent followers, Botometer identifies only 45 (22,5%) as "normal". 72 are likely to be trolls/bots (they have 2,5 of higher Botometer score); 83 are inactive accounts mostly without activity histories or user pictures. For the most part, they didn't have activity in July 2020, when we tracked them, nor did they two months later in September. If they are trolls, they are 'sleeping trolls' used primarily to increase someone's audience in social networks.

The figures mentioned above make the ratio of  suspicious to normal accounts very skewed; 77,5% are suspicious, while only 22,5% are 'normal'. A table with the 200 accounts we examined can be found here. 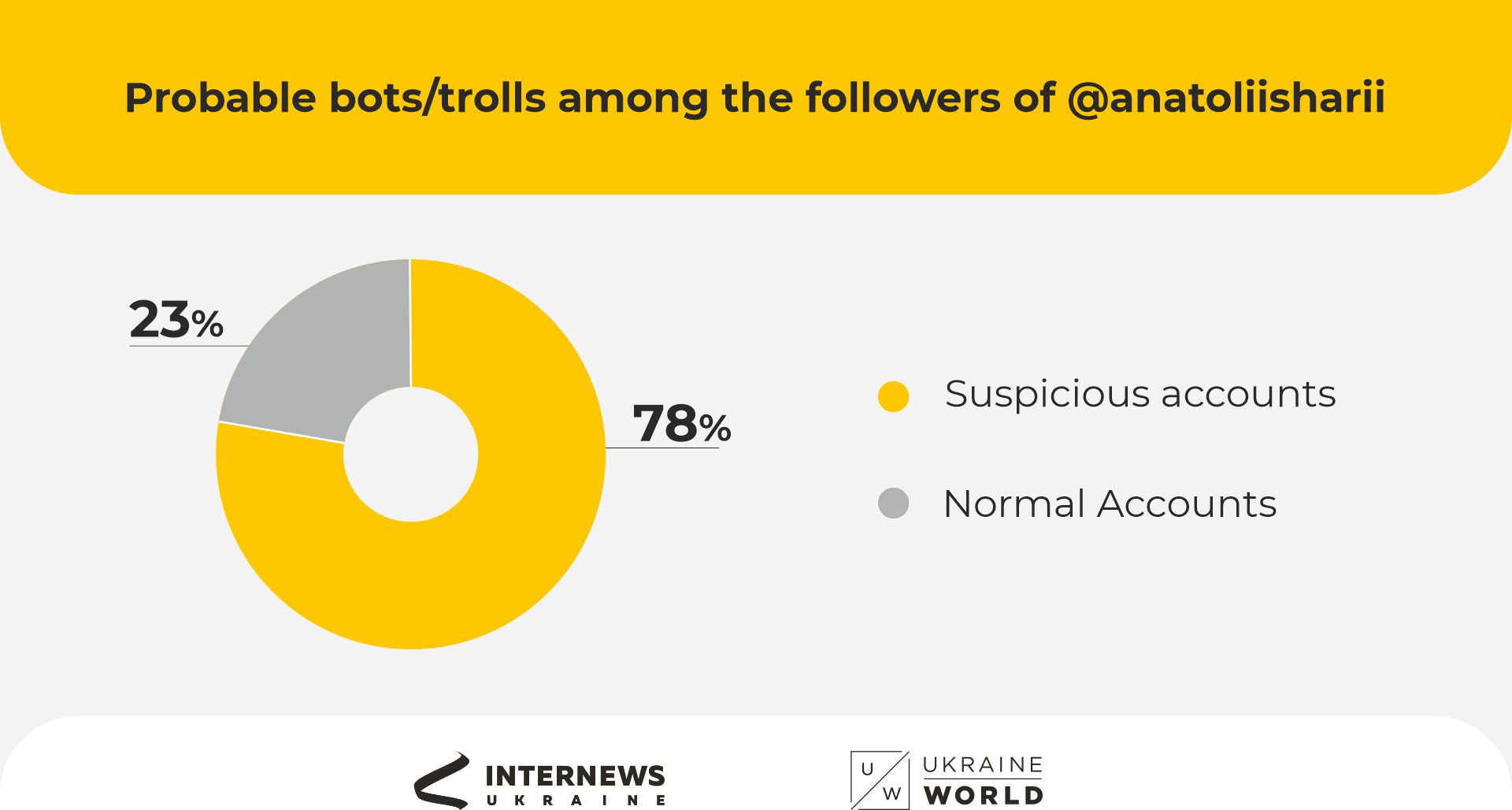 Another point we looked at was  account handles. Out of 200 accounts we analyzed, 96 (48%) had handles which were just random combination of characters or names with random numbers, like @quY2bLTSP2OVQ6Y, @OxDo0dxDlTqzO2L, @67hwx9ucpY2n5zL, @OxDo0dxDlTqzO2L, @lxn3eVB0x4Ai39r, @hD9OPVYTBnsyjqG, @6VoUnZAXgmK4ShV, @q4VDxjnkDGjJf4w . It is highly unlikely that a real person would create an account with such a long and difficult handle to memorize and repeatedly type.

48% of the new Shariy followers we analyzed have handles of random combination of characters. They are likely to be trolls or bots

Let's have a look at some of the specific accounts which retweet Shariy. For example, @belka20608596 does so on a regular basis: its timeline is full of retweets from Shariy's Twitter or from Sharij.net. It seems that @belka20608596 was created exclusively to promote the messages of anti-Western actors in Ukraine: it follows only 9 accounts, all of them well-known for their anti-Western rhetoric: 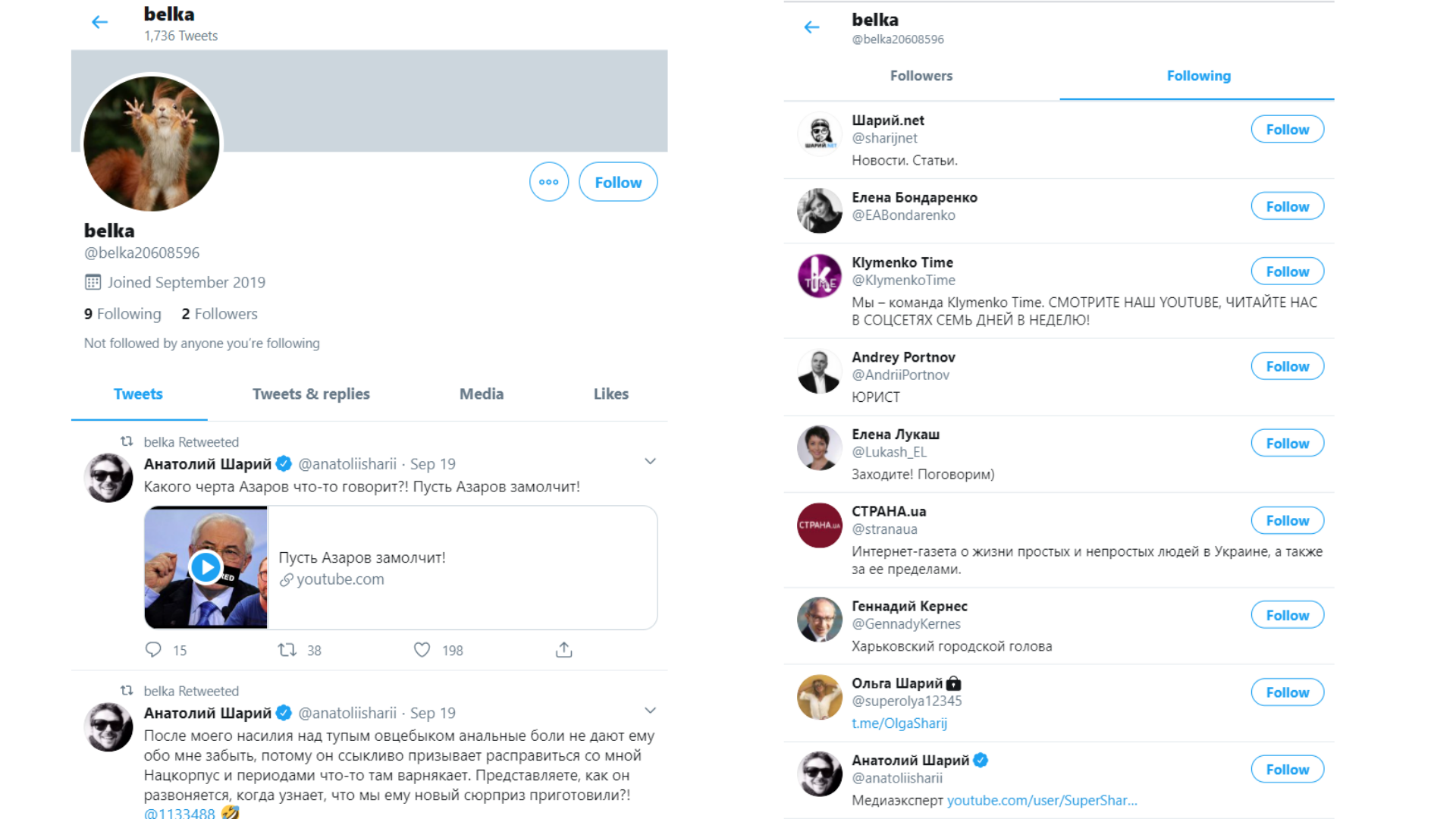 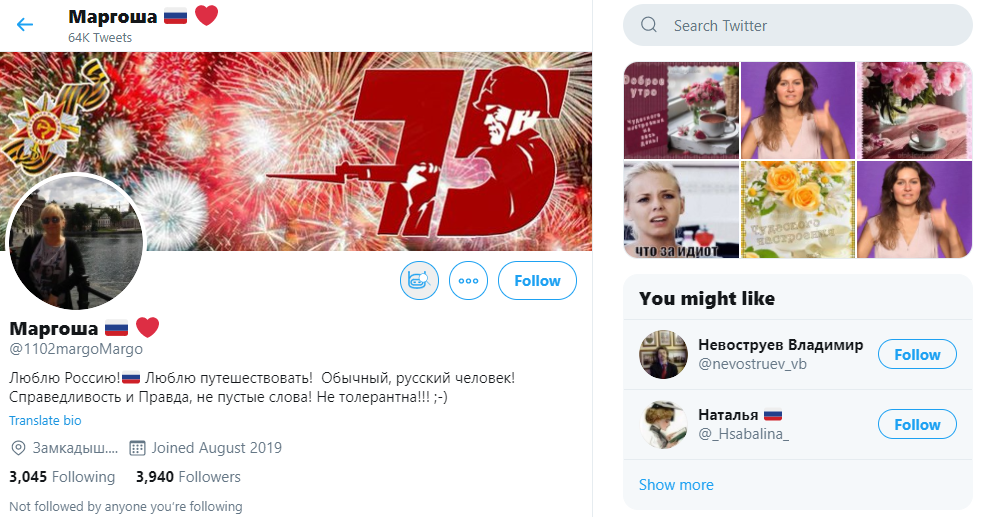 As you can see from the timeline and self-description, it is an account of a self-described Russian patriot, with Russian flags both in its name and in its self-description. The user declares themselves to "love Russia", is an "ordinary Russian person" and is "non-tolerant". Its background picture makes reference to Russia's exhaustively-promoted tropes of its 'Great Victory' during World War II.

Twitter recommendations of accounts similar to "Margosha" lead us to other accounts with very similar characteristics. 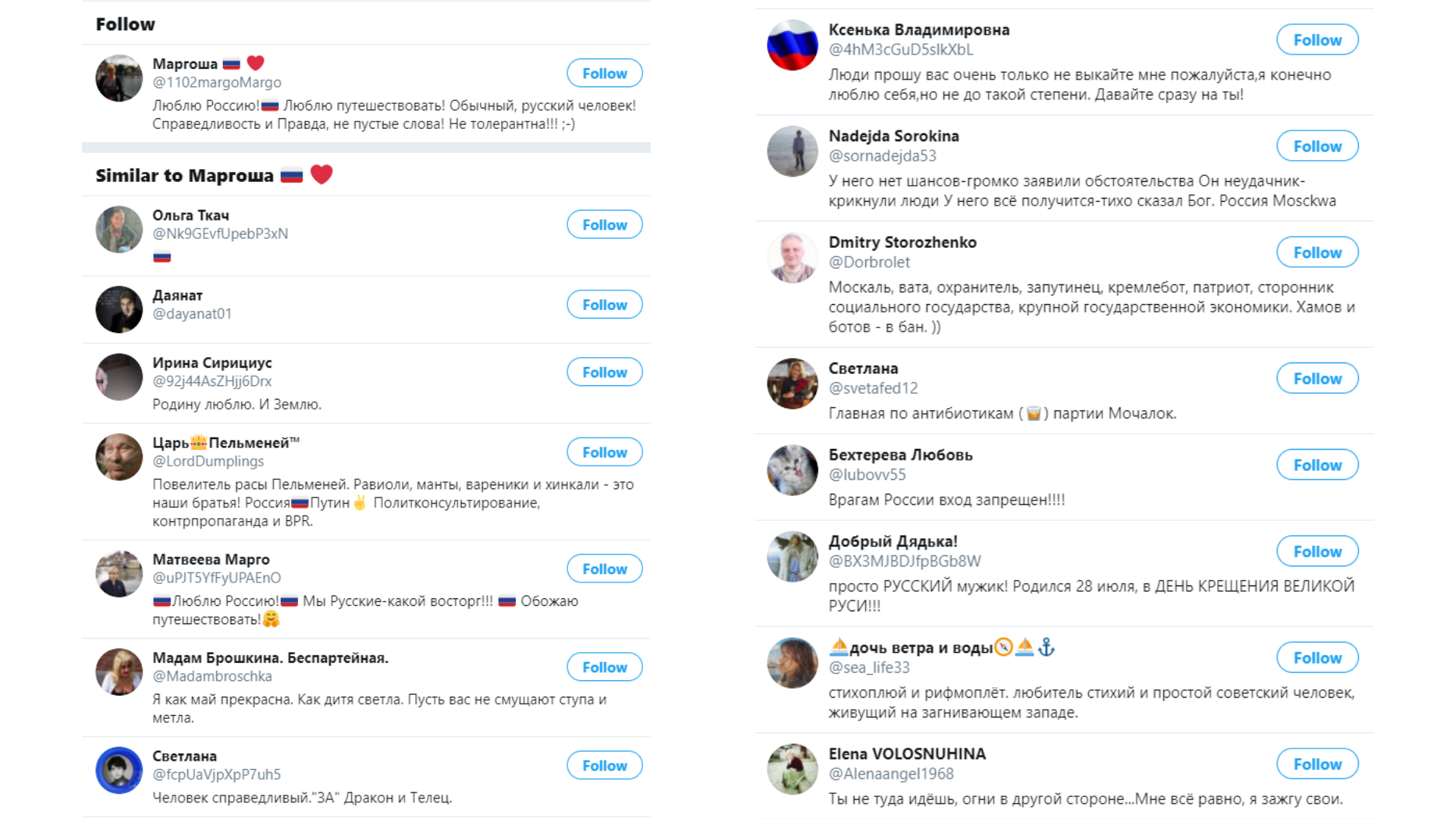 All of those accounts -- and, presumably, hundreds of others -- have similar traits. They

Or take accounts which retweet Sharij's posts -- for example, a post about Navalnyi poisoning:

These trolls are integrated into primarily Russian information content and agenda. On 8-9 September, when we were writing this article, their major topics were poisoning of Russian oppositionist Aleksey Navalny, the sentencing of Russian actor Mikhail Yefremov and events in Belarus. On all those topics, these trolls / bots have promoted Kremlin narratives -- and helping anti-Western actors in Ukraine, like Shariy, Portnov, Medvedchuk, Lukash and others to promote anti-Western agenda too. They are most probably not trolls created in Ukraine for the purposes of Ukrainian politics; they are trolls integrated into the Russian information space

This short analysis can reveal two things: a) Shariy is likely massively using trolls / bots to promote his messages; b) many of these "fake fans" are closely linked to Russia and are being employed to promote pro-Kremlin and pro-Putin narratives.

For example, Portnov, a former Yanukovych ally and current promoter of an anti-Western agenda in Ukraine, has tried to enlarge his audience with the help of bots tweeting around the clock.

Andriy Portnov has been very active in recent years in his efforts to discredit the Ukrainian Revolution of Dignity and the country's subsequent pro-European reforms. He is also among the top actors promoting anti-Western agendas, according to UkraineWorld's investigations.

In our current study, we look at accounts which retweet Portnov's posts. We found accounts tweeting with superhuman speed and regularity -- some of them up to 70, 100 or even 180 tweets per day!

Portnov shares followers with Victor Medvedchuk, Russia's key ally in Ukraine. For example, look at @I8AKwnkQvkEnwIy, which calls itself С. Lawyer. law criminal. It was created in February 2019, and has made 13 000 tweets since then, i.e. about 23 tweets per day. @Eli3arija, another fan of Medvedchuk, also regularly retweets Portnov.

Here are some of the other probable bots who frequently retweet Portnov:

It is interesting also to look at this fan of Mr Portnov:

According to the statistics traced by SocialBlade, it has made an average of 700 posts per week in 2020, i.e. 100 posts per day.

We can compare this profile with "Margosha", the fan of Mr Shariy which we analyzed earlier. Both have a tremendously high number of tweets, and both have emblazoned their profiles with "Great Patriotic War" propaganda images.

Another anti-Western politician, Olena Lukash, a former member of the Party of Regions and justice minister in the Azarov government under Yanukovych, also has suspicious accounts promoting her content.

We analysed Lukash's 200 most recent followers (as of July 16) with Botometer. Of those, 67 are likely bots with bot scores higher than 2.5 . Another 45 followers have empty timelines. Ten more are protected accounts with very few followers, which are also suspicious. This leads us to conclude that about 61% of Lukash followers (out of the 200 we analyzed) are suspicious accounts likely to be bots or trolls. 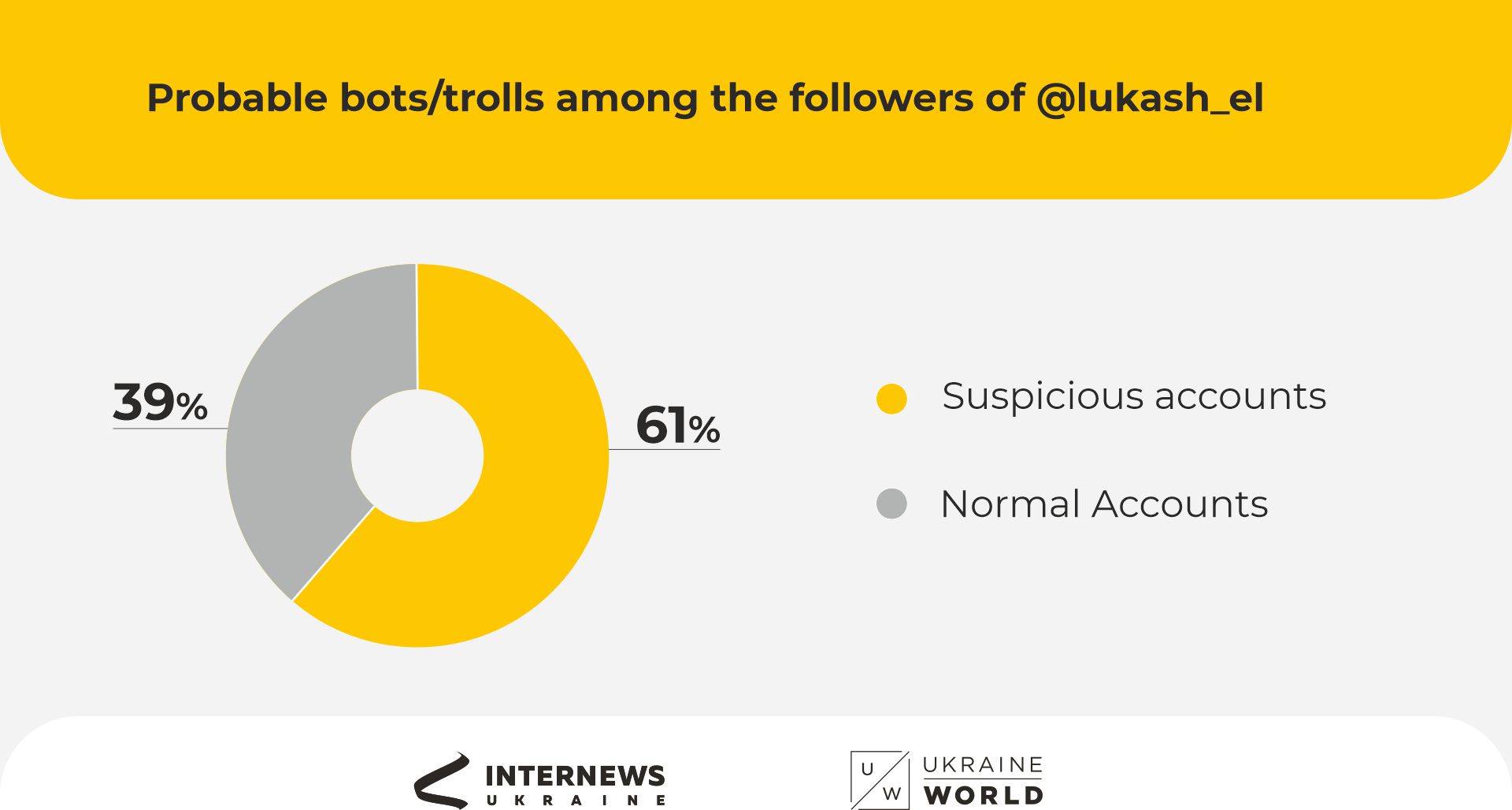 It is interesting that the Olena Lukash's and Andriy Portnov's fake audiences overlap: both Ukrainian revanchist politicians have many common followers on Twitter, most of whom are likely bots or trolls

An analysis byTweepDiff shows that Olena Lukash and Andriy Portnov, who often share similar messages on various topics, have 4179 common followers on Twitter. This figure amounts to 24,5% of Lukash followers and 43,1% of Portnov's followers. 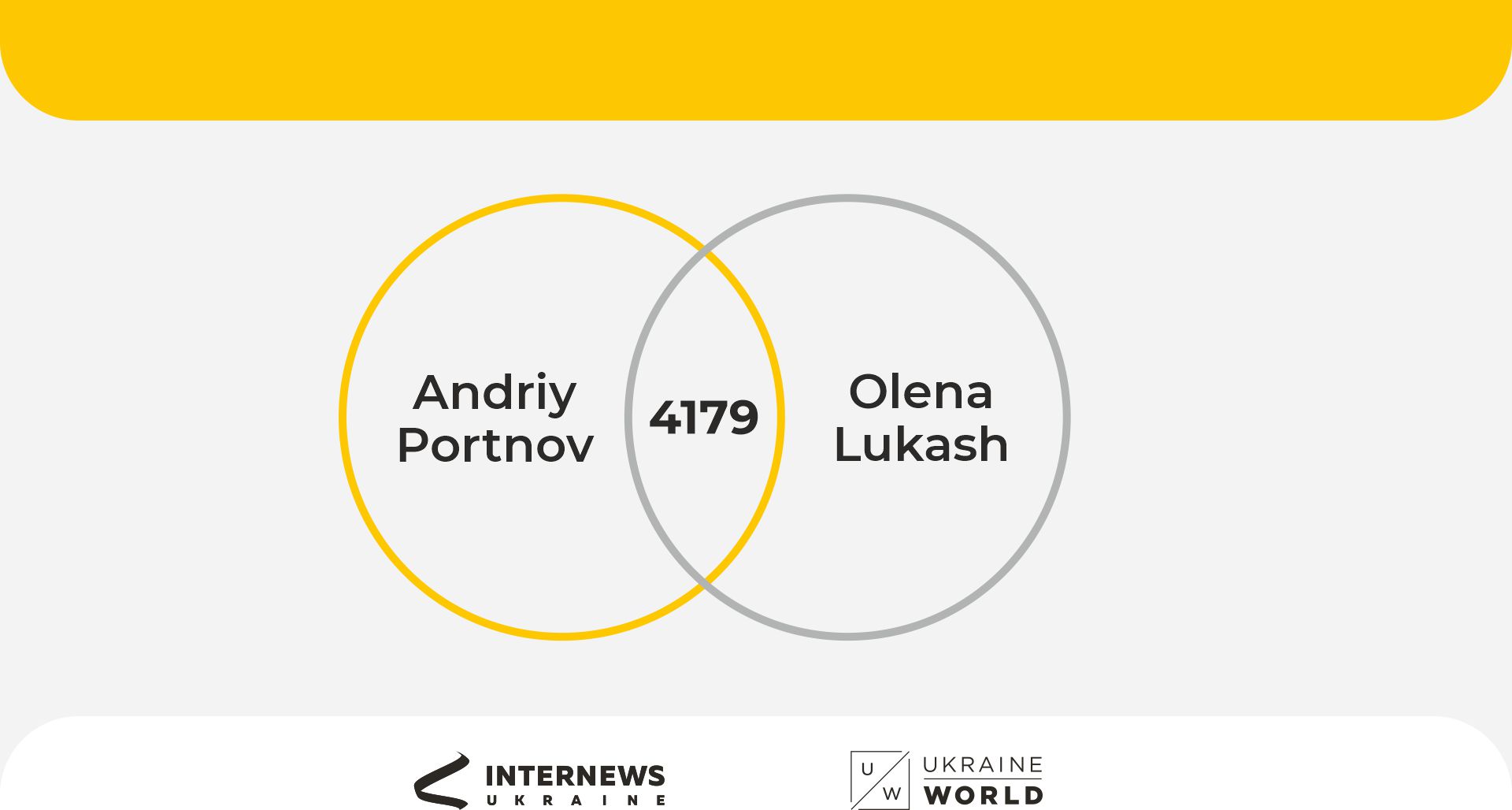 We analysed the 100 most recent common followers of Lukash and Portnov as of July 20. Of them, 38 are most likely bots with bot scores higher than 2.5, according to Botometer. Another 19 recent followers have empty timelines. Six more are closed accounts with very few followers, which are also suspicious. 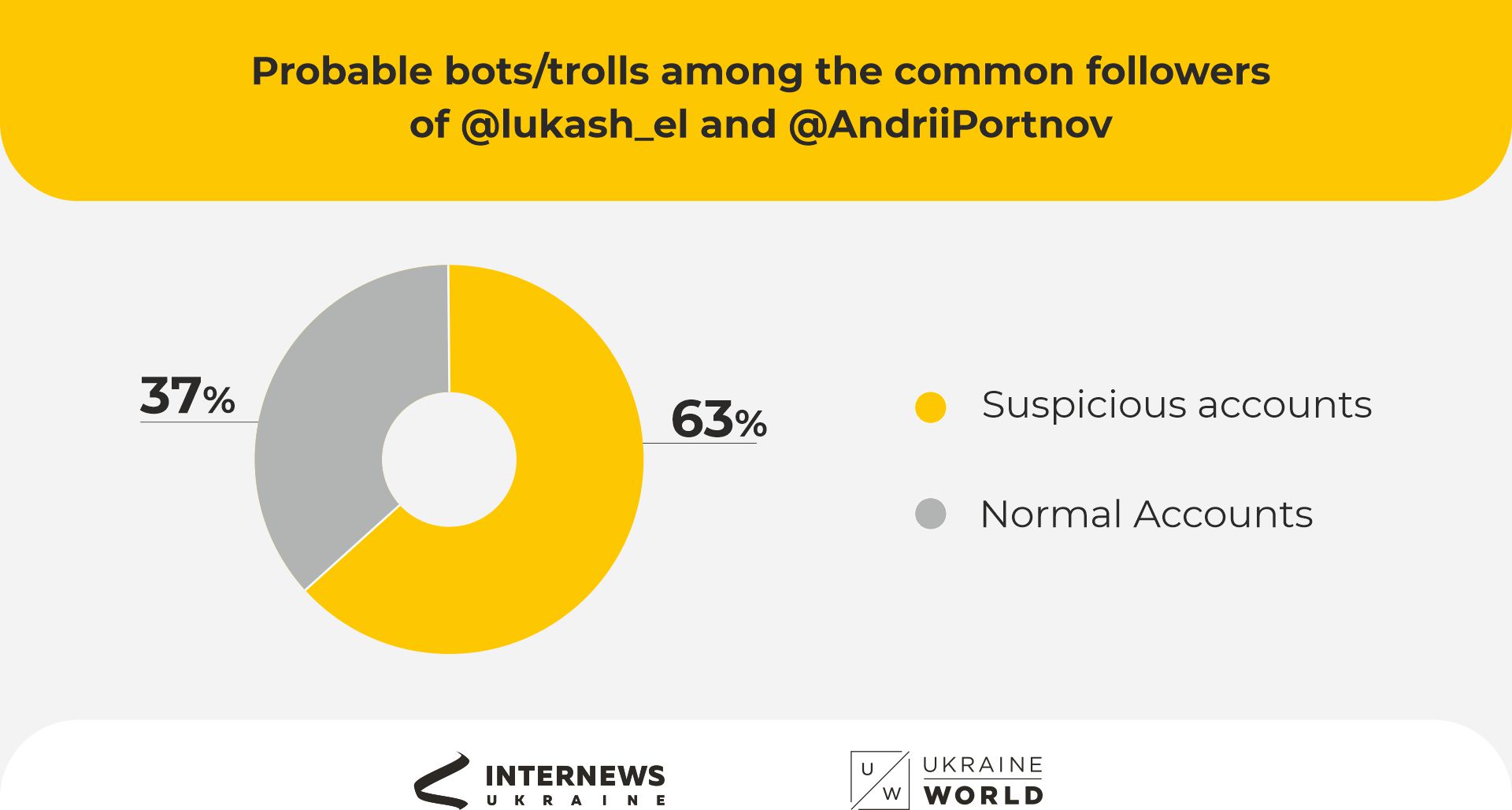 Trolls are also being used by a key Kolomoyskyi ally

Oleksandr Dubinskyi is one of the key information allies of oligarch Ihor Kolomoyskyi, the former owner of PrivatBank and one of the most vocal opponents of the IMF in Ukraine. As an MP from the Zelensky's "Servant of the People" Party, Dubinskyi uses highly aggressive rhetoric and hate speech against the proponents of Ukraine's pro-Western orientation, calling them "sorosiata" (roughly "Soros piglets"). UkraineWorld hasstudied this rhetoric in our regular digests.

However, Dubinskyi is also likely using bot armies. Our analysis of over 200 accounts of Dubinskyi's Twitter followers on Botometer shows a remarkably large share (47%) of suspicious accounts whose bot-likeliness score is over 2.5. 36% of accounts contain no timeline, which also makes them highly likely to be bots. Together, about 83% of Dubinskyi's followers in our selection are likely to be bots or trolls. Only 17% are "normal" accounts. 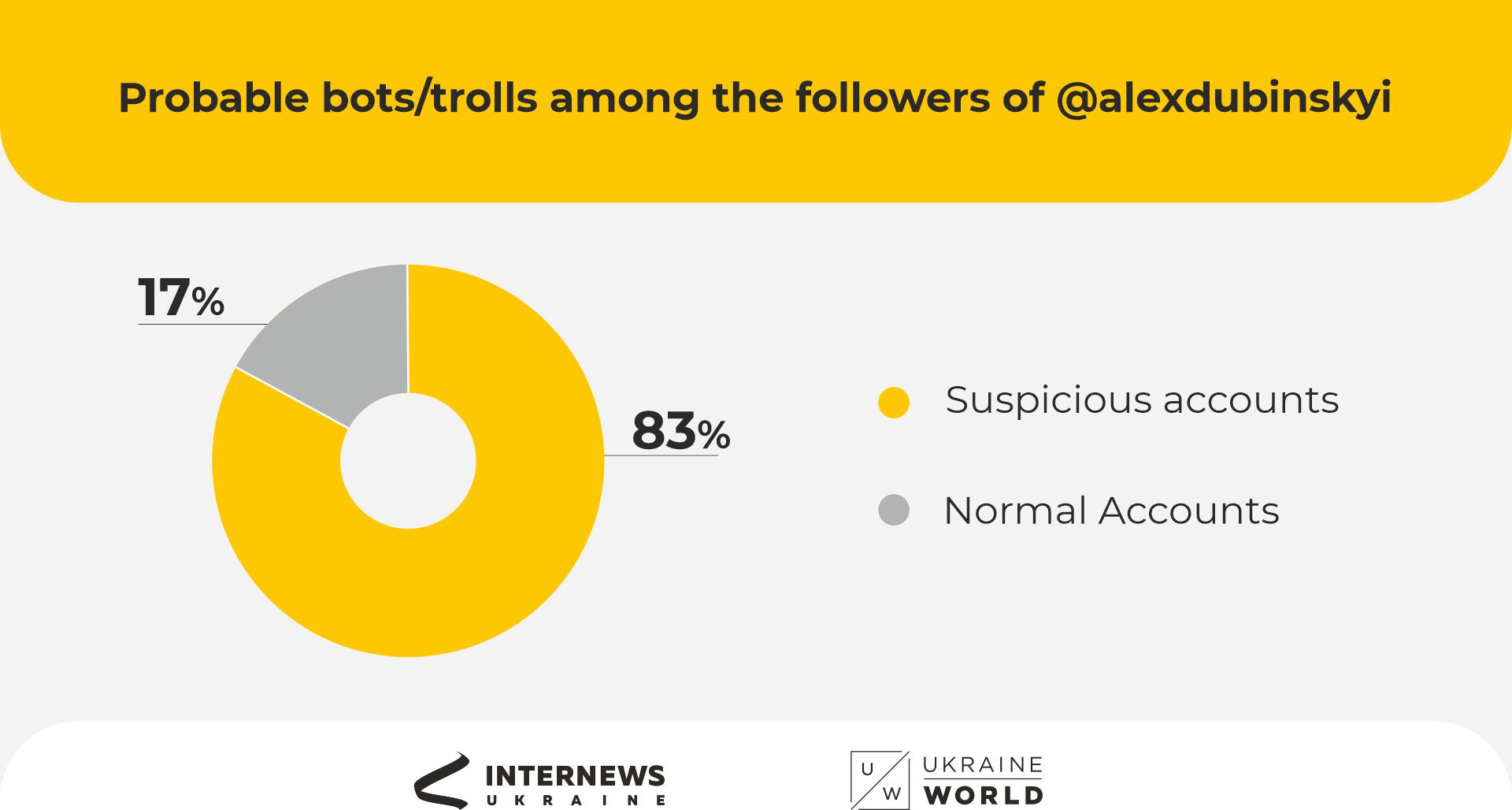 In 2014, when the Revolution of Dignity (Euromaidan) ousted authoritarian president Viktor Yanukovych and Ukraine chose a path of reforms toward a more democratic and transparent society, the country's pro-European choice seemed to be irreversible.

After six years, however, the country's information space has been flooded with anti-Western narratives promoted by pro-Russian or anti-Western oligarchs, as previous UkraineWorld studies show. The poll ratings of anti-Western parties like the Opposition Platform For Life and the Party of Shariy are also growing.

The audience of these narratives and parties is real and massive. In this study, however, we have also shown how these anti-Western actors are prolifically using fake fans and fake audiences to organize concerted (dis)information behaviour and promote their messages. Quite often, the behaviour of these troll armies is linked to a pro-Kremlin agenda. We have also showed how Russian trolls have promoted Kremlin narratives on such important topics as the MH-17 tragedy.

There is a link between fake supporters and real supporters. Fake supporters help anti-Western actors make their narratives more visible on social networks, and to gain real supporters. More importantly, however, this inauthentic behavior seeks to deceive the public discourse by pretending that the messages they sent are liked and shared by real people.

It is also important to note that these anti-Western actors, while often using virulent hate speech against democratic values and Western civilization, are using Western instruments (social networks like Twitter or YouTube) to undermine the very culture that created them.

Five years into the war against Ukraine, and Russia keeps up support for its activities in the field with aggressive propaganda both home and abroad. A number of...