September 29, 2021
German-Language Facebook page and Telegram channel promote the Kremlin narratives about the war in Ukraine. 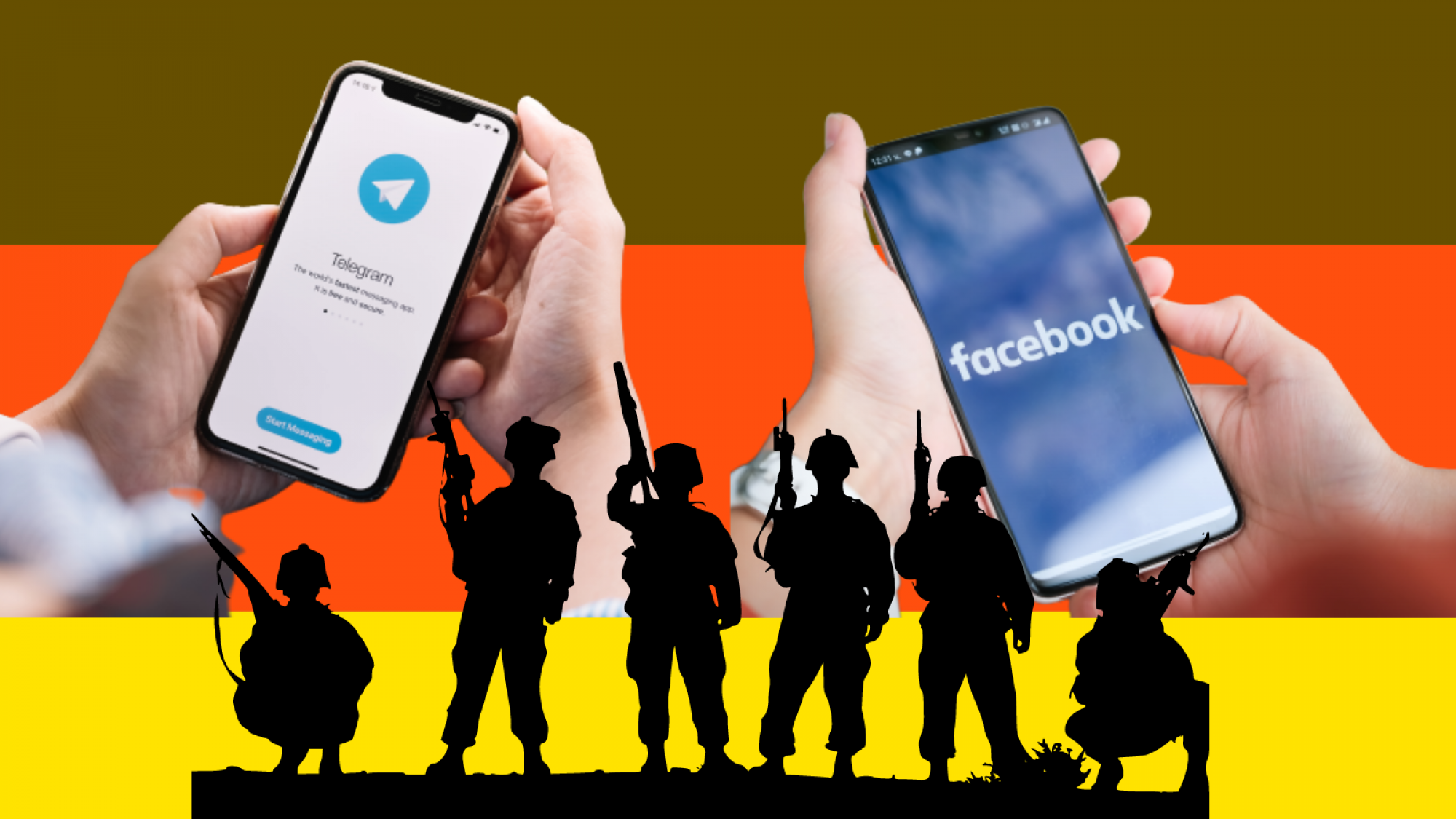 If an average Facebook user takes a look at the German-language public page Bürgerinitiative für Frieden in der Ukraine, they might think that it was created in support of Ukraine in its war with Russia. Both the page picture and cover photo use the colors of the Ukrainian flag. "We are a group of nine private individuals of different nationalities (Ukrainian, Russian, Chechen, Greek, and German) who are in contact with families and friends in both Ukraine and Russia. We take care of this page in our spare time and reflect our personal view of things through our contributions," the page description reads. 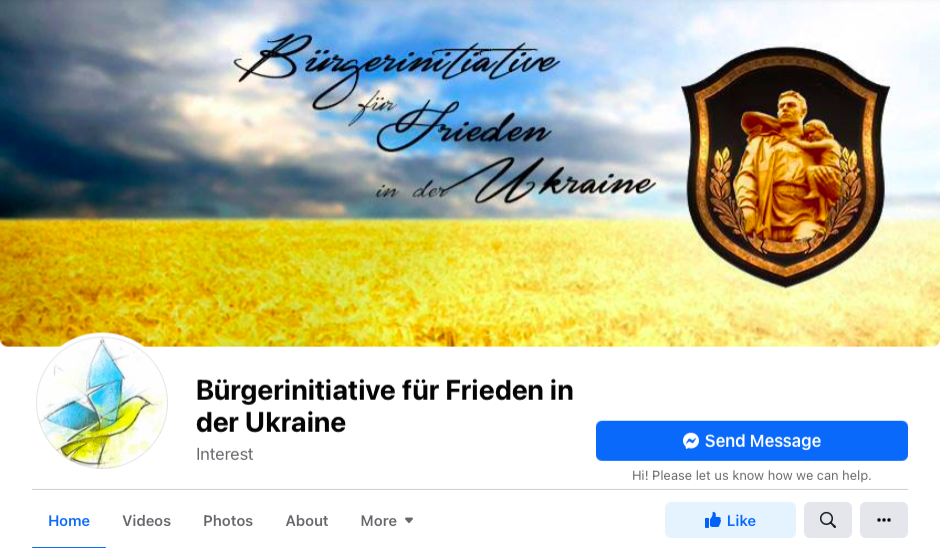 However, a closer look at the content of the posts on the page shows that Bürgerinitiative für Frieden in der Ukraine almost exclusively spreads anti-Ukrainian, anti-Western, anti-NATO and pro-Kremlin narratives.

The page was created on February 28, 2014, and its name has not changed since then. This is a bit suspicious, since at the time Russia had already started the annexation of Crimea, but there was no all-out war yet, and the so-called "Russian spring" in Donbas had not started yet. So what was the page's title referring to? 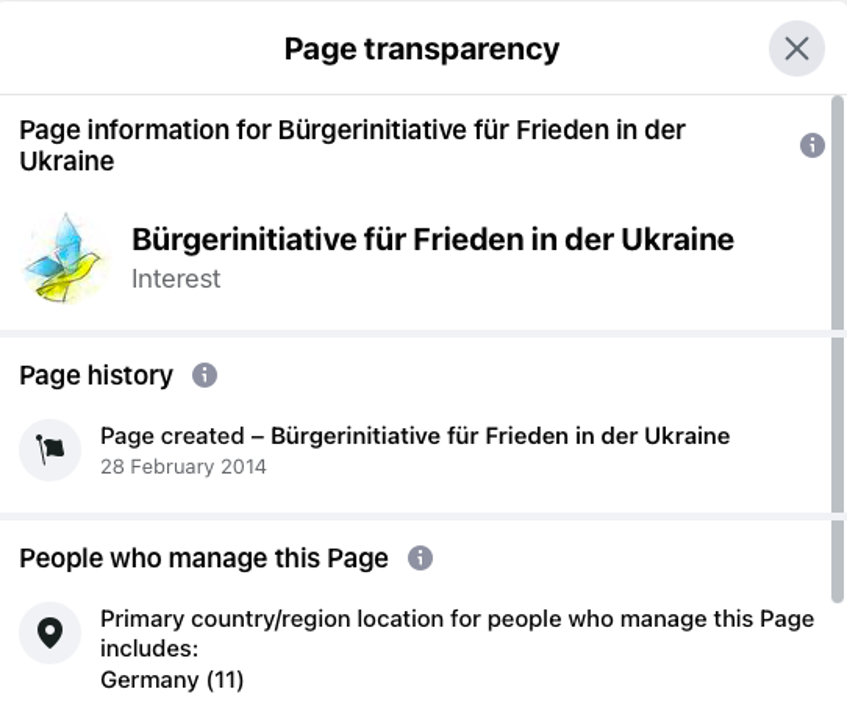 The answer lies in the page's very first posts. One of them claims that Euromaidan was a coup organized by the West. Another one quotes Russian historian Nikolai Starikov saying that "Europe has a plan to destroy Ukraine" in order to "create chaos which would hurt Russia."

UkraineWorld used data from CrowdTangle, a public insights tool owned and operated by Facebook, to determine which topics covered by the page in 2021 were the most popular. Within the last 12 months, the page has received 218.3 thousand interactions (reactions, comments and shares) from Facebook users (16.1 thousand interactions per month on average). 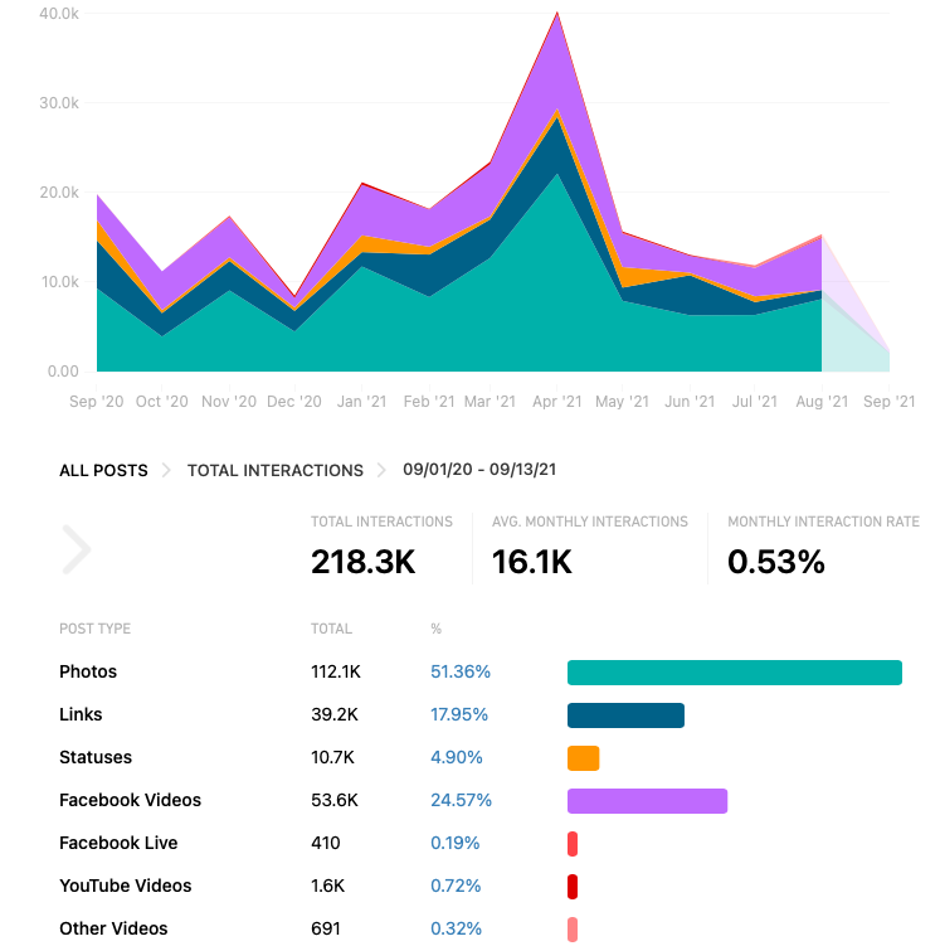 One of the posts with the most interactions was about the U.S. promising Ukraine protection in case of the escalation of Russian aggression. "THIS MEANS AN ABSOLUTELY REALISTIC DANGER OF CONFLICT OF THE TWO NUCLEAR POWERS---USA/NATO & RUSSIA---IN THE MIDDLE OF EUROPE---WITH ALL THE DANGERS OF A NEW WORLD WAR!!!" the post reads. 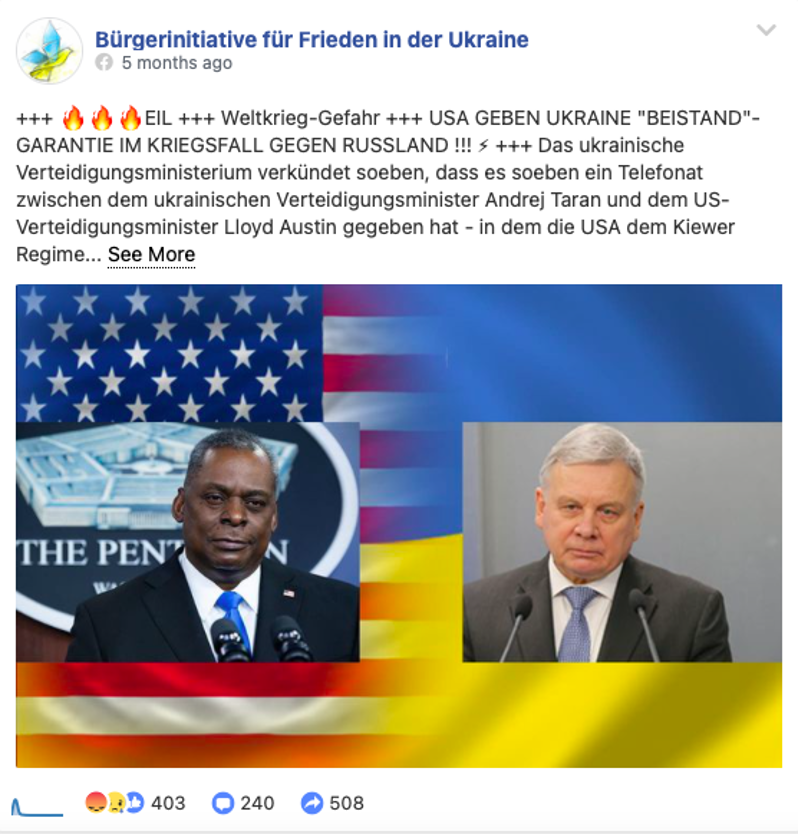 Another popular post on the page mocked the U.S. after the assault on the Capitol on January 6. "Defence budget of 700 billion, and then a guy in a buffalo costume storms the Capitol?" reads a meme posted on the page. 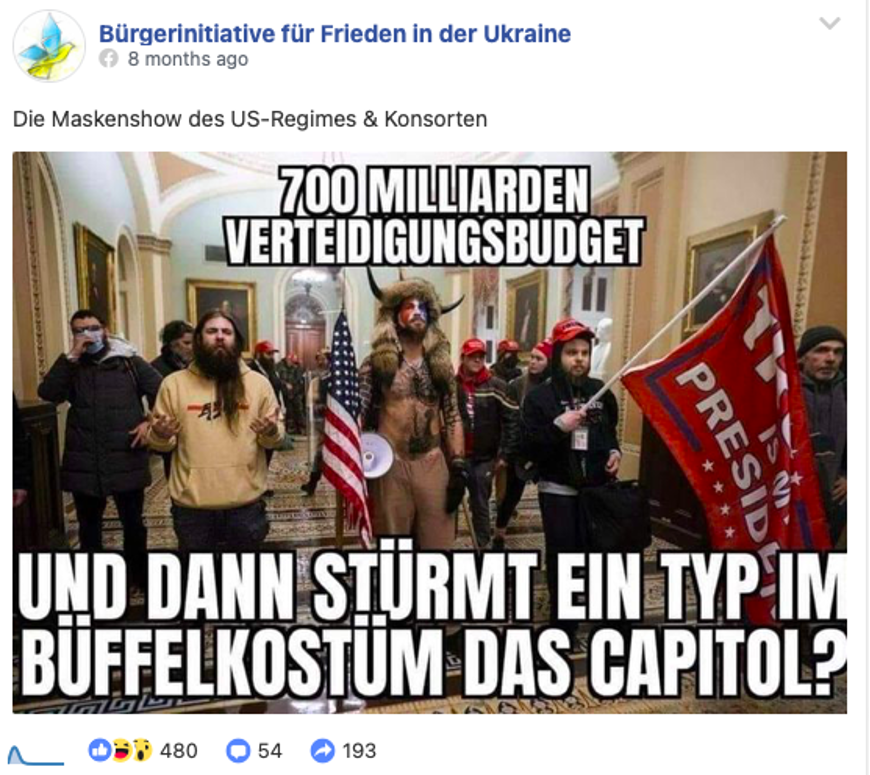 In April 2021, the situation around Donbas was escalating as Russia increased its military presence along Ukraine's border. This increase was officially justified by military exercises which took place in March, but the massing of Russian forces in the region did not abate, even two weeks after the ostensible completion of Russia's manoeuvres. However, in line with Russian media narratives, the Bürgerinitiative für Frieden in der Ukraine Facebook page spread the narrative that Russia's actions were merely a response towards Ukraine's aggression.

"RUSSIAN ARMY DEPLOYS ITS MOST MODERN S-400 AIR DEFENSE SYSTEMS IN THE DIRECTION OF THE UKRAINE BORDER---AFTER REPORTS ABOUT THE UKRAINIAN AIR FORCE CONCENTRATING FIGHTER JETS & DRONES AT KHARKIV FOR THE PURPOSE OF AIR STRIKES," Bürgerinitiative für Frieden in der Ukraine wrote on April 3. 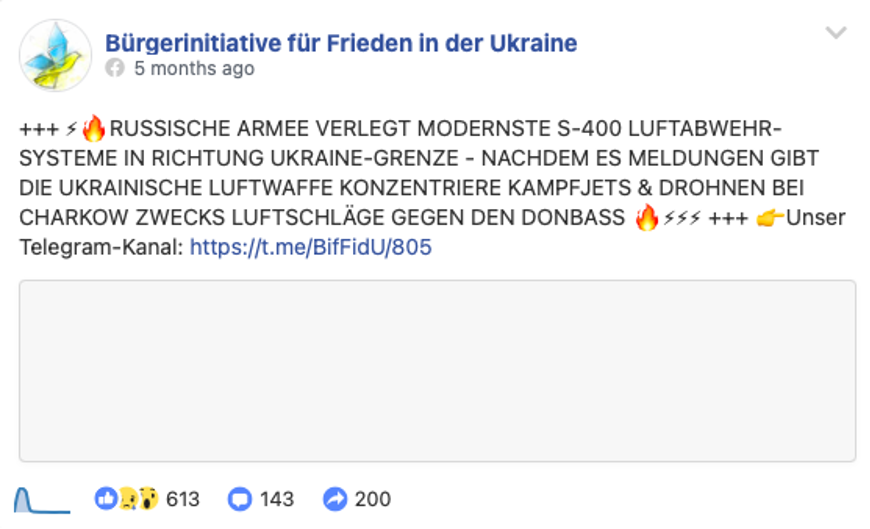 Posts from the pages were also shared by suspicious Facebook accounts onto different public groups. Günter Glück is one of the main amplifiers, and is connected with several groups. 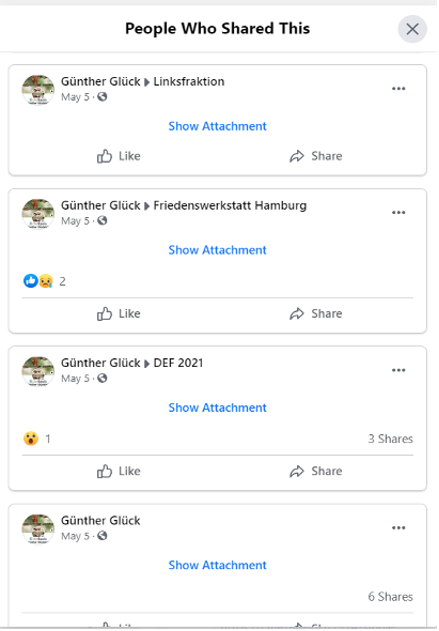 The page tries to quote various sources, including the U.S. and German media, to create an illusion of diversity. However, the main sources from which the page amplifies its narratives are Kremlin-controlled propagandist media, such as rusvesna.su and de.rt.com, as well as various pro-Russian Telegram channels. It also frequently quotes its own Telegram channel. While Telegram is not very widespread in the U.S. and Europe, it is very popular in Russia.

A Telegram from the Kremlin

Bürgerinitiative für Frieden in der Ukraine manages a Telegram channel, where it posts articles portraying Ukraine as an aggressor, blaming it for triggering the war in Donbas, along with other anti-Ukraine, anti-Western and pro-Kremlin messages. As of September 13, the channel has 2720 subscribers. Telemetr.io, a Telegram statistics service, shows that the channel's audience is active: the average reach of a post is 1239, meaning that 45.55% of subscribers read the channel's posts. With 12 posts per day on average, the channel has 500 thousand views per month. 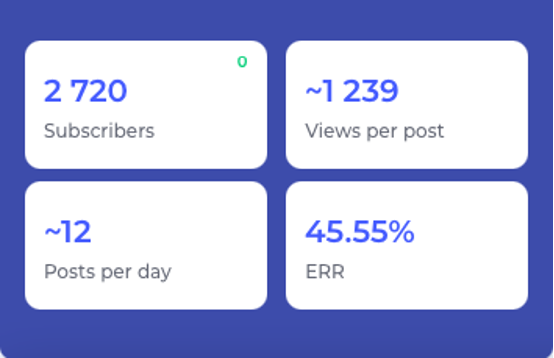 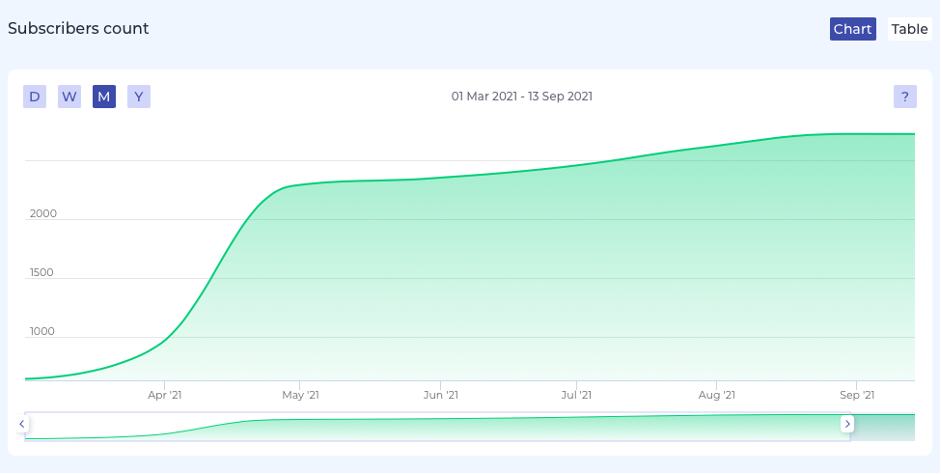 This increase coincides with the abovementioned escalation of the situation around Donbas. In line with Russian media, the Telegram channel of Bürgerinitiative für Frieden in der Ukraine was spreading the narrative that Russia's actions were merely a response towards Ukraine's aggression. 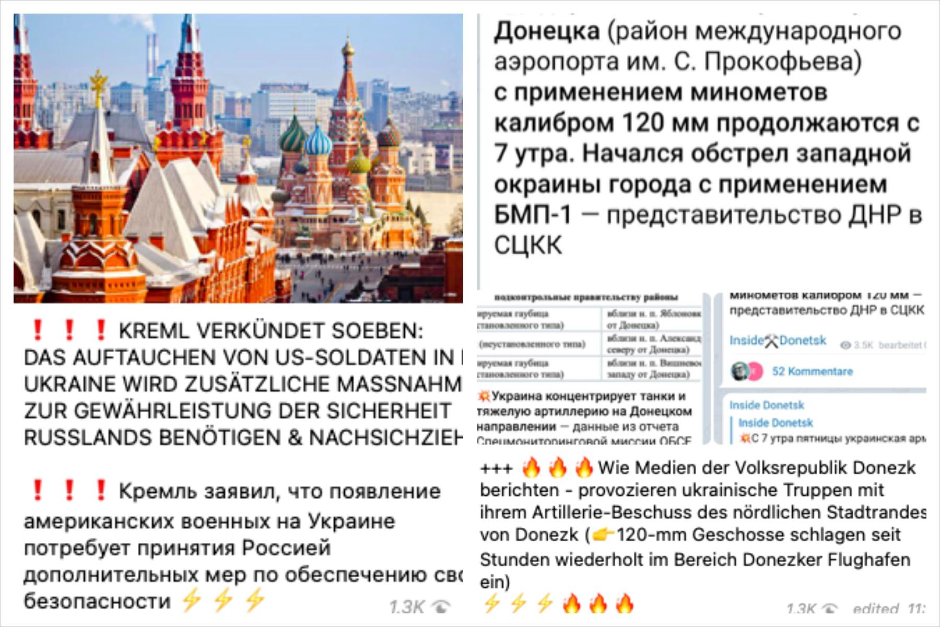 In these posts, the Telegram channel referenced Russian sources which tried to depict Ukraine as an aggressor in the Donbas war. In one of the posts in the screenshot above, the channel repeats the Kremlin's statement that "the appearance of the American soldiers in Ukraine demands that Russia take additional measures to ensure its security." In another post, the channel writes with reference to Telegram channels from the so-called "DPR" that "Ukrainian army is provoking [the "DPR"] with shelling of the northern outskirts of Donetsk."

Such a one-sided depiction of the reality on the Bürgerinitiative für Frieden Telegram channel still exists. The other Telegram channels quoted by the channel feature exclusively Russian sources, including RT and Sputnik. 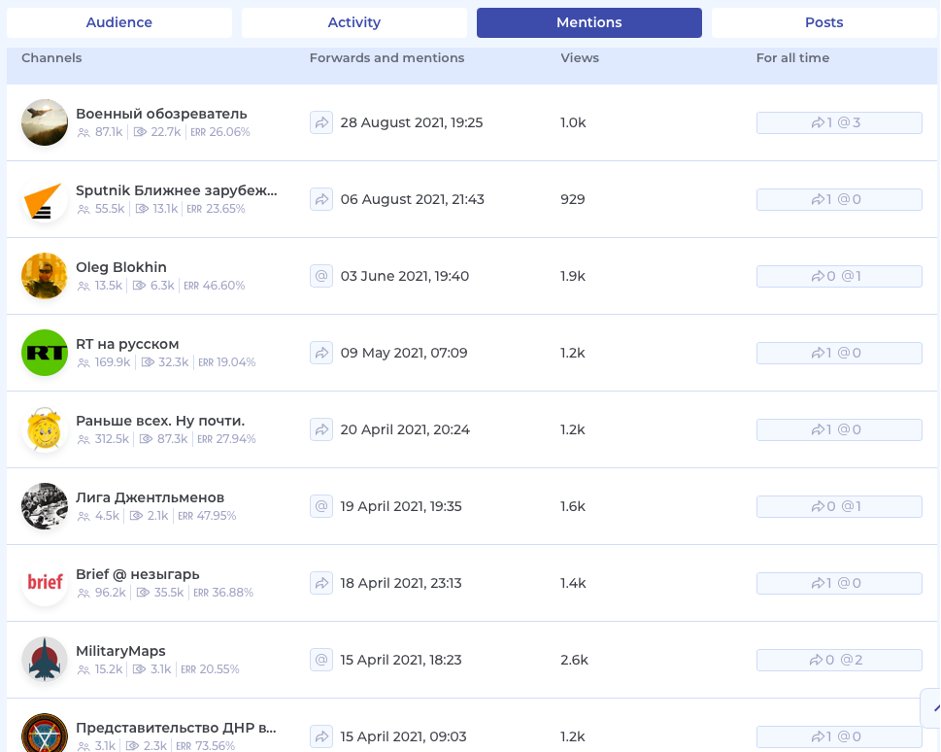 The channel does not try to hide its pro-Russian allegiance. In a post published on September 11, it writes without any reference to sourcesthat "Ukrainian troops of the Ukrainian fascist regime attacked an oil depot in Donetsk (Donetsk People's Republic) with a drone." 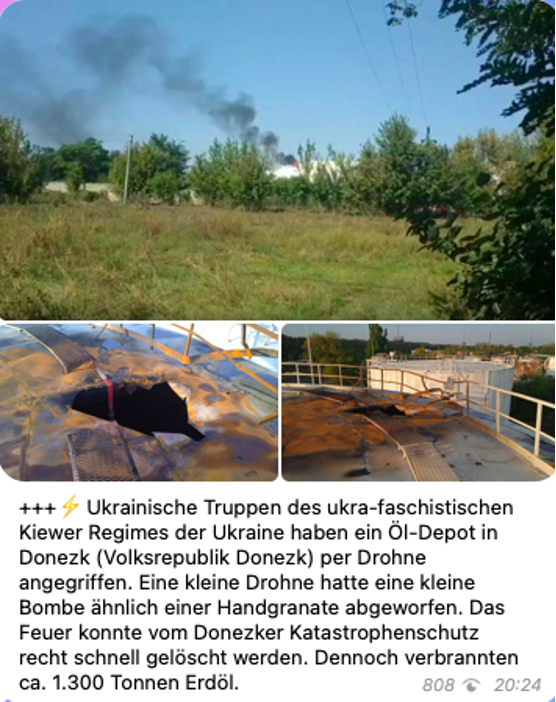 Posts from the Bürgerinitiative für Frieden Telegram channel are shared by other German-language channels, mostly with far-left allegiance and/or which are dedicated to military topics. These channels are mostly friendly towards Russia and hostile towards Germany's cooperation with the U.S. and NATO. 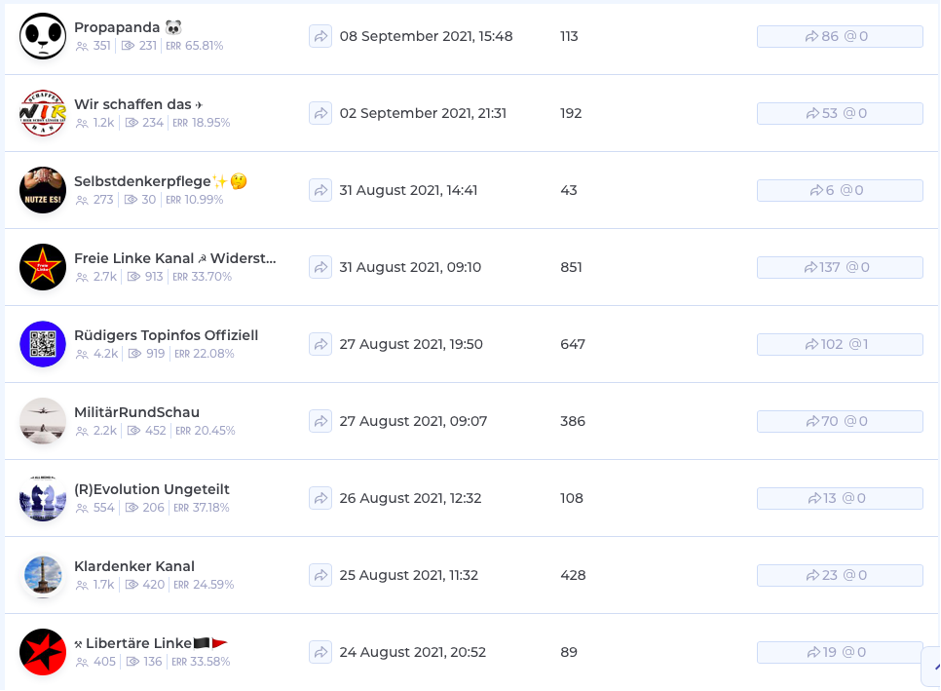 So is it tied to Russia?

Bürgerinitiative für Frieden in der Ukraine is another point in a wide network of German-language public groups and pages on Facebook which share Kremlin narratives about NATO, the U.S. and Ukraine. But does it have ties to the Kremlin, or is it indeed a civic initiative it claims to be? The answer is not 100% clear.

However, it is not uncommon for Russia to mask its information operations targeting  audiences in Europe and the U.S. as civic movements. UkraineWorld has already reported on Bonanza Media, an organisation which calls itself a "platform for independent journalists," but in fact has been working in coordination with Russia's military intelligence.

This article was written within the framework of the project "Antibot: how to resist information manipulations" which is being implemented by NGO Internews-Ukraine with financial support from the NATO Information and Documentation Centre in Ukraine. This article is the sole responsibility of its authors and may not reflect the official position of NATO.