August 30, 2021
Ukraine is not a cause for which the country’s top Western partners are willing to pay a high cost. Learn more in our article. 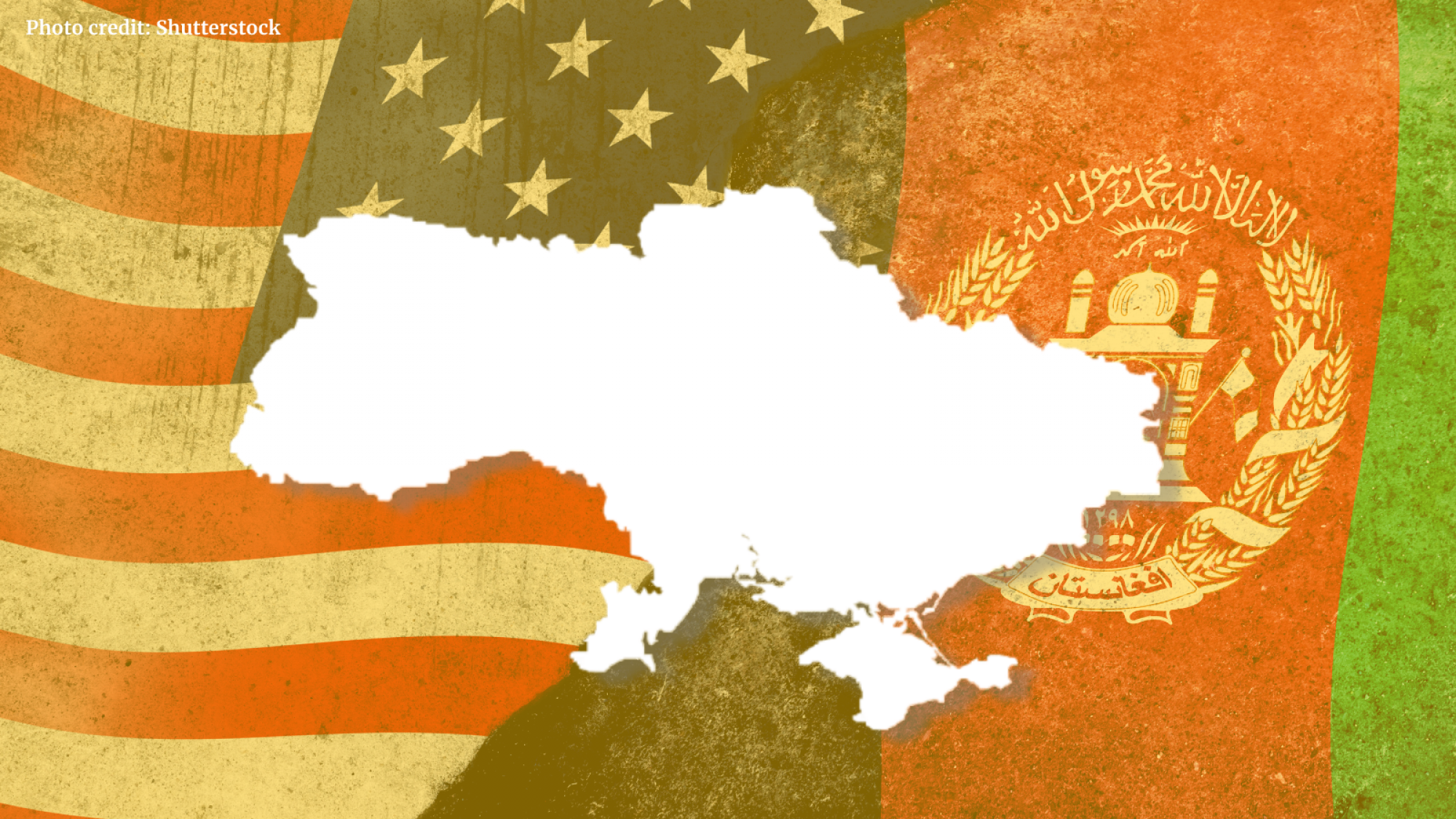 There are many people on the frontiers of freedom watching the horrible images out of Afghanistan and wondering just how much confidence they can have in America’s partnership with their country, including in Kyiv. This concern is not unreasonable for Ukrainians – it has become painfully clear recently that Ukraine is not a cause for which the country’s top Western partners are willing to pay a high cost.

Ukrainians can be confident, however, that they will not face the same horrible fate to which the Afghan people have been left. For one, there is a dramatic difference in the nature of America’s military and political support for the two countries, and the fact that Ukraine defends itself with its own blood and mostly its own bullets. However, the more important distinction between Afghanistan and Ukraine is probably that while the Afghan government spent decades believing that the US and the West would never let the Taliban overrun the country, the current Ukrainian government appears to be preparing Ukraine for the reality of the limits of Western support.

President Volodymyr Zelensky came into office with a table of daunting foreign policy challenges set for him. Despite the congratulatory calls from abroad, all was not well in Ukraine’s relations with its four key allies. Britain was on its way out of the EU and renouncing its voice in the bloc’s affairs. France’s President Emmanuel Macron was responding to the Trump Administration’s hostility to NATO by articulating a vision of European security that didn’t rely on trusting the Americans, but did require a modus vivendi with Russia. Angela Merkel, who had been key to holding together the EU sanctions regime against Russia, was known to be on her way out. Then, a mere five days after his party had received a historic mandate to govern in the Rada elections, Zelensky received the infamous phone call from President Trump where he learned that the White House was making military assistance aid conditional on Kyiv’s conjuring up dirt against Joe Biden, Trump’s most likely challenger in the 2020 US elections.

Ukrainians had reasons to be optimistic about a Biden presidency. As the Obama Administration’s point person on Ukraine, he had been a good friend to the country, its civil society, and its people’s European ambitions. With Trump in office, his Secretary of Defense James Mattis and National Security Adviser HR McMaster reversed the Obama Administration’s decision not to send lethal defensive aid to Ukraine (over Trump’s misgivings). However, that support for Ukraine couldn’t survive once Mattis and McMaster were gone and Trump’s lawyer, Rudy Giuliani, found something in Ukraine that would actually hold the President’s attention. If Trump had won re-election, he would likely have had a special rage for the subject of his first impeachment, which is why things could only get better for Ukraine with Biden in office.

But seven months after Biden’s inauguration, it is clear that America’s “comeback” will not benefit its partners evenly. While President Biden has restored the priority of America’s trans-Atlantic partnerships, some of these partners are more important than others. By refusing to block the completion of the Nord Stream 2 pipeline, Biden made clear that the US-German partnership took precedence over the US-Ukraine partnership. Germany will be a key partner in containing Chinese influence in Europe, while Ukraine will not. From Berlin’s side, Germany is not willing to let Ukraine’s interests as a transit corridor for Russian gas override its desire to have reliable access to Russian gas.

It seems that the Zelensky administration understands that Ukraine is not going to be a big winner in Biden’s foreign policy.

It is hard to imagine that if Zelensky and his team were confident about continued Western backing, they would go out of their way to put their NATO and EU partners on the spot in a very awkward way about Ukraine’s eventual membership prospects. They know that the answer is an unchanging “no,” and that they will not change anyone’s mind about Nord Stream 2. Rather, they are likely seeking marginal concessions, like increased military and economic aid or more credible punishment against Russia if they decide to use gas access as a weapon against Ukraine. Perhaps they’re even getting somewhere.

The Biden administration has not been completely apathetic towards Ukraine, and showed an inclination towards realpolitik from the start. In early February, the US endorsed Zelensky’s decision to block the three TV channels controlled by Viktor Medvedchuk, who is seen as Vladimir Putin’s main ally in Ukrainian politics. This conspicuously signaled that the US ranked Ukraine’s concerns about its security and sovereignty higher than its pluralistic democracy. Moreover, President Biden himself was willing to spar with President Putin over the Russian surge of forces along the border with Ukraine (which itself may have taken place just to attract that very American attention). However, it is also important to remember that the US did not have to sacrifice anything valuable for these steps.

Indeed, Zelensky’s decision to go after Medvedchuk’s strongest means of exercising power in national politics -- as well as put law enforcement pressure on him and his partner in alleged crime, Taras Kozak, of treason -- shows that the Ukrainian leader is willing to use his authority to shake up the arena of Ukrainian political competition in a way his predecessor Petro Poroshenko was not. The same thing can be seen in the recent crackdowns on the far-right Azov organization and figures in its orbit.

However, not all of Zelensky’s political competitors are getting squeezed right now. The strategic law enforcement scrutiny against Poroshenko from earlier this year has largely died down, and Zelensky appears not to be doing much to antagonize oligarch Rinat Akhmetov, Ukraine’s richest man and chief of the second-tier pro-Russian political clan in Ukrainian politics.

While Poroshenko’s politics are decidedly more ethnonationalist than Zelensky’s, both men see Ukraine’s future being oriented towards the West (disputes over terms on loans from international lenders aside). Meanwhile, Akhmetov’s wealth is primarily tied to assets inside Ukraine, meaning that his fortunes are tied more closely to Kyiv than to Moscow. His main power in Ukraine draws from being an industrial magnate rather than a caporegime of Vladimir Putin. Moreover, Akhmetov has vested interests across the Ukrainian political and media landscape, making him someone that the European-oriented establishment can and must do business with. Excluding elements which threaten the pro-European establishment and keeping Ukraine’s political competition to elements within that establishment (or those not too threateningly outside) is the sort of thing one might do to keep the Ukrainian ship of state able to float on its own in the future.

Perhaps this tea leaf-reading is too speculative, and Zelensky is accidentally stumbling rather than marching into measures to make his country more durable. But I do hope that we are seeing the result of strategic planning by Zelensky’s team. It is this sort of statecraft that will keep Ukraine’s independent statehood sustainable in a future where the West is not willing to make sacrifices for it.

Joel Wasserman is an editing consultant for InterNews Ukraine. He also works with a Ukrainian veteran support organization and worked as an observer in Ukraine's recent elections. He tweets @joelw_762.

News about an alleged coup d'état plot, Zelensky’s emotionality and tension with journalists were some of the most telling messages from the Ukrainian President’s...
VIDEO
July 2, 2019