October 9, 2022
Small town of Balakliya has gained much notoriety as one of the first significant objectives taken in Ukraine’s Kharkiv Region counteroffensive. 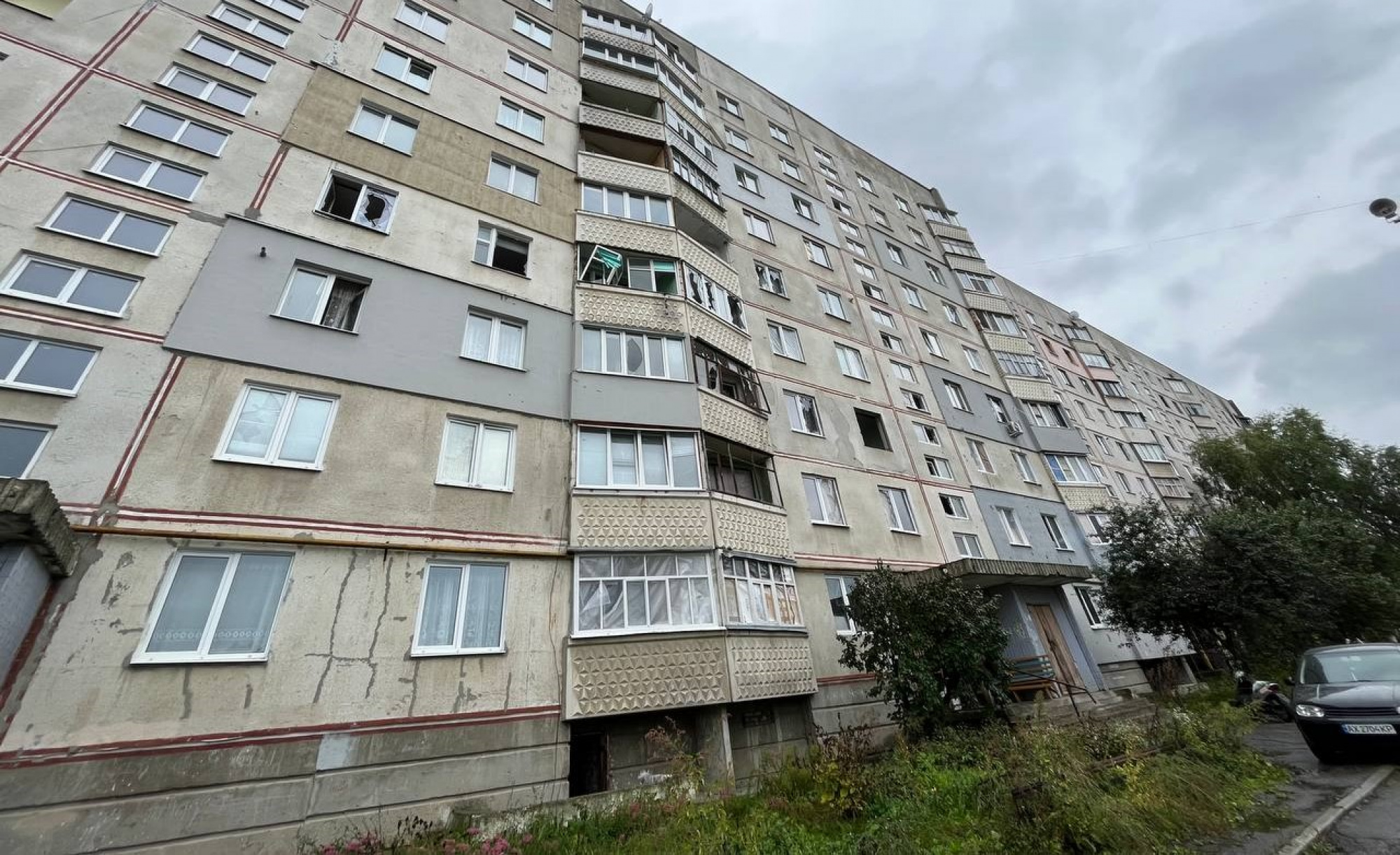 On August 29, 2022, the Ukrainian Armed Forces launched a full-scale counter-offensive on all fronts in Ukraine: from Kherson in the south to Kharkiv in the northeast. After Ukrainian artillery, HIMARS systems, aviation, and "Bayraktar" UAVs delivered a massive attack on Russian positions, in some places of the front, the occupiers' defenses collapsed, and Ukrainian forces began to advance rapidly. On September 6, 2022, on the Kharkiv front in the area of the city of Balakliya, there was a cascading collapse of Russian defenses, when occupying troops retreated and abandoned both their first and second lines of defense.

Ukrainian Armed Forces command expertly used tactical surprise in their rapid, sudden counteroffensive in Kharkiv Region, skillfully exploiting Russia's redeployment of the bulk of its forces to the South to defend against Ukraine's loudly-touted offensive there. "We have not lost anything and will not lose anything," Vladimir Putin said at the economic forum in Vladivostok on September 7. However, only two weeks later on 21 September, he would announce a partial military mobilization in Russia. Meanwhile, his troops continue to retreat in the East as they are pressed by Ukrainian troops.

We traveled to the small, little-known town of Balakliya, which has recently gained much notoriety as one of the first significant objectives taken in Ukraine's Kharkiv Region counteroffensive, the most stunning and successful counter-offensive since World War II, as experts say. You may wonder what "Russian peace" has brought with it. Indeed, it has brought nothing new — torture chambers, complete devastation, and poverty. We saw firsthand the consequences of what went on in the town during the Russian occupation.

"Guys, may I leave you more eggs and apples? Will you eat?" — a grandmother in a colorful headscarf asks soldiers at a checkpoint near the entrance to Balakliya. There are two baskets with eggs hanging on her bicycle handlebar, and behind there is a big plastic bag with apples inside. A soldier graciously tries to decline, saying  "We are not hungry, granny! We are getting food delivered regularly. We do not need anything at all. Keep it for yourself".

The grandmother takes her load off the handlebar and puts it on the ground. "Who do you think the old woman was all these for? For you of course! We have been waiting for you for so long!". Both started crying.

I arrived in the city center. Here, near the regional library, I saw a big gathering of people. And suddenly I heard Hari Krishnas singing. Initially, I could not even imagine that the first thing I would see in this town ravaged by war would be a performance by Hari Krishnas performance. It looked extremely surreal: people were standing in line to get drinking water and food while next to them were Krishnas singing and dancing. 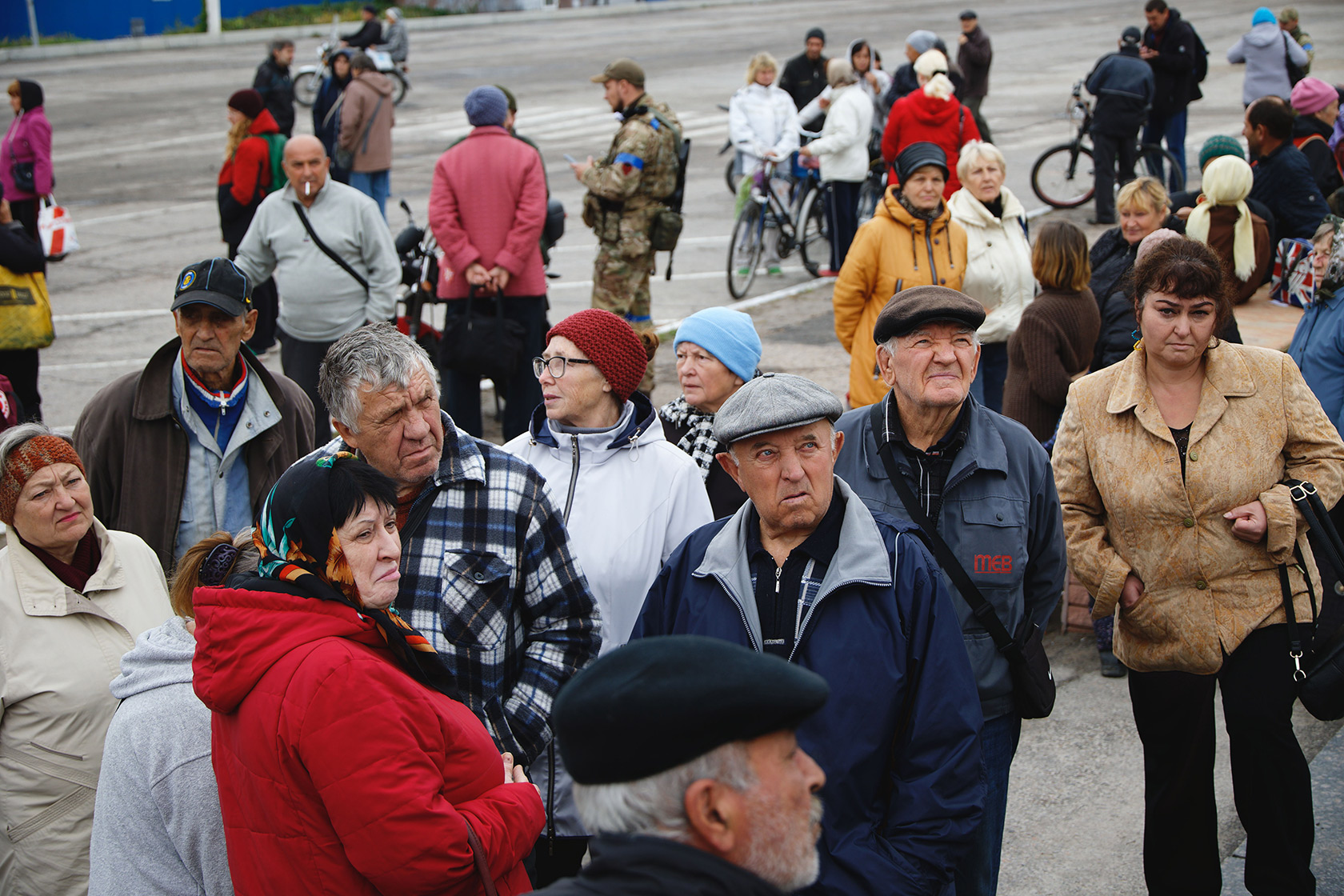 Nearby there was a couple: a man, and a woman. Just like me, they were quite surprised about what was going on. I approached them and said hello. The woman immediately started a conversation with me. Her name is Svitlana. As it turned out, they had come here not long ago to take back the rest of their belongings, since they left Balakliya and escaped to Kyiv Region a few days after the Russians seized their town. Her husband Volodymyr told me that one of the main reasons they left was that it was impossible to live in Balakliya: since the very beginning of the occupation, they were left without electricity, heat, or running water. However, these deprivations were not the worst part.

The Russians started chasing and capturing people right on the streets. No one saw these people again . Different rumors were flying around the town. So Volodymyr and Svitlana decided to leave the city and go to their relatives before something happened to them. The couple looked disoriented. They said that  their friends who remained in Balakliya visibly aged, and looked devastated and scared. Volodymyr says that he barely recognized his old friend, who had turned gray despite his young age. I didn't want to keep them, but before they left, they asked me to blur their faces from my pictures. They are afraid that one day, the Russians could retaliate.

I walked several hundred meters along Balakliya's central street. A woman came to meet me. She was carrying a package of food in her hands. She immediately recognized me as a journalist, because she didn't know my face from among everyone she knew in the city. The woman's name was Vira. When I asked how she lived during the Russian occupation, she answered by swearing at the Russians. "They robbed everything here. Everything that could be taken was taken away by the Russian military in their own cars. At first, Russians were primarily interested in alcohol and food. They were always hungry." "And then," she said with irritation, - "they also took note of household appliances. Especially when they found out that there was nobody living in an apartment, they immediately took everything out of there."

She went on with sadness in her eyes: "Looting was just the half of it. They were torturing people...".

The woman took a deep breath and said: "Every day they were torturing someone in the local police department. The poor people screamed so loudly that residents living nearby heard these terrible sounds of shouting and crying. What is more, they were punishing not only men but women too. In two-person cells, there could be 8 or 9 of them kept at a time. Inhuman monsters,"- she said.

Finally, we managed to see the Russians' improvised torture chamber, which they had set up in the police department. It is hard to express in words what we saw and felt. First of all, it was very stuffy in these cells, so to speak, and there was a musty smell of something that had been rotting for a long time. Some dates were scratched on the walls. Apparently, the detainees were trying to keep a calendar. I don't want to talk about the toilets in the cells and the smell which came from them. I can't imagine how people here survived in the summer heat.

After I thanked Vira for her stories, I heard a loud shout on the street: "Carry the water carefully! Watch out, don't spill it!". This young mother was telling her 12-year-old son not to spill the water he was carrying in buckets on the sidewalk. People gathered near a truck  with a cistern. Each of them in turn was placing their tubs under a powerful stream of water. As always happens in such cases, there was panic that there would not be enough water for everyone. "Water is now more expensive than gold in Balakliya!"  said a woman near the water truck. The driver of the water truck began to reassure people, saying that there would be enough water for everyone. But the people did not listen to him, and everyone tried to push their tub under the stream.

The only shop working in the city

After walking a few hundred meters, I heard the sound of a working generator. It was at the only store in the city where you could buy bread, food, and some household cleaning supplies with Ukrainian money. Inside the store, I was kindly greeted by the store employees. Nadiya, the owner, said that now she hopes to restore her business, because she had practically no work during the occupation. She also lamented how the Russians who looted, took food from the store, and did not pay for anything.

She was especially angry about the Buryats, who sincerely did not understand why the residents of Balakliya did not meet them with bread and salt and refused to feed them. According to Nadiya, after the Buryats, units consisting of ethnic Russians came to Balakliya. They were also disappointed that the local residents did not want to cooperate with them. During the time I was in the store, dozens of people passed by me, and not one who I interviewed spoke positively about the Russians. Everyone cursed them and wanted them to experience the same fate as the people of Balakliya did under occupation.

I left Balakliya with a heavy heart, but still with the hope that the city would recover from the Russian occupation and that normal life would resume here. All the locals with whom I managed to talk were afraid of the Russians returning.

Recently Putin and then Medvedev published articles on Ukraine-Russia relations. Read a recent analysis by our Editor-In-Chief to know more.
VIDEO
June 3, 2022

Testimonials from the War: Mariupol

This is a story of a family that was rescued from the bombardment of Mariupol. What they had to live through is truly terrifying #UkraineWorldTestimony #SaveMariupol...