November 28, 2019
This study proves that Ukrainian Facebook, Instagram and VKontakte are flawed virtual mirrors that provide us with only a distorted picture of society. They all give different perspectives. But together they provide a picture of how Ukrainians perceived the elections and the new parliament, and how this interaction may have shaped Ukraine’s new political landscape. 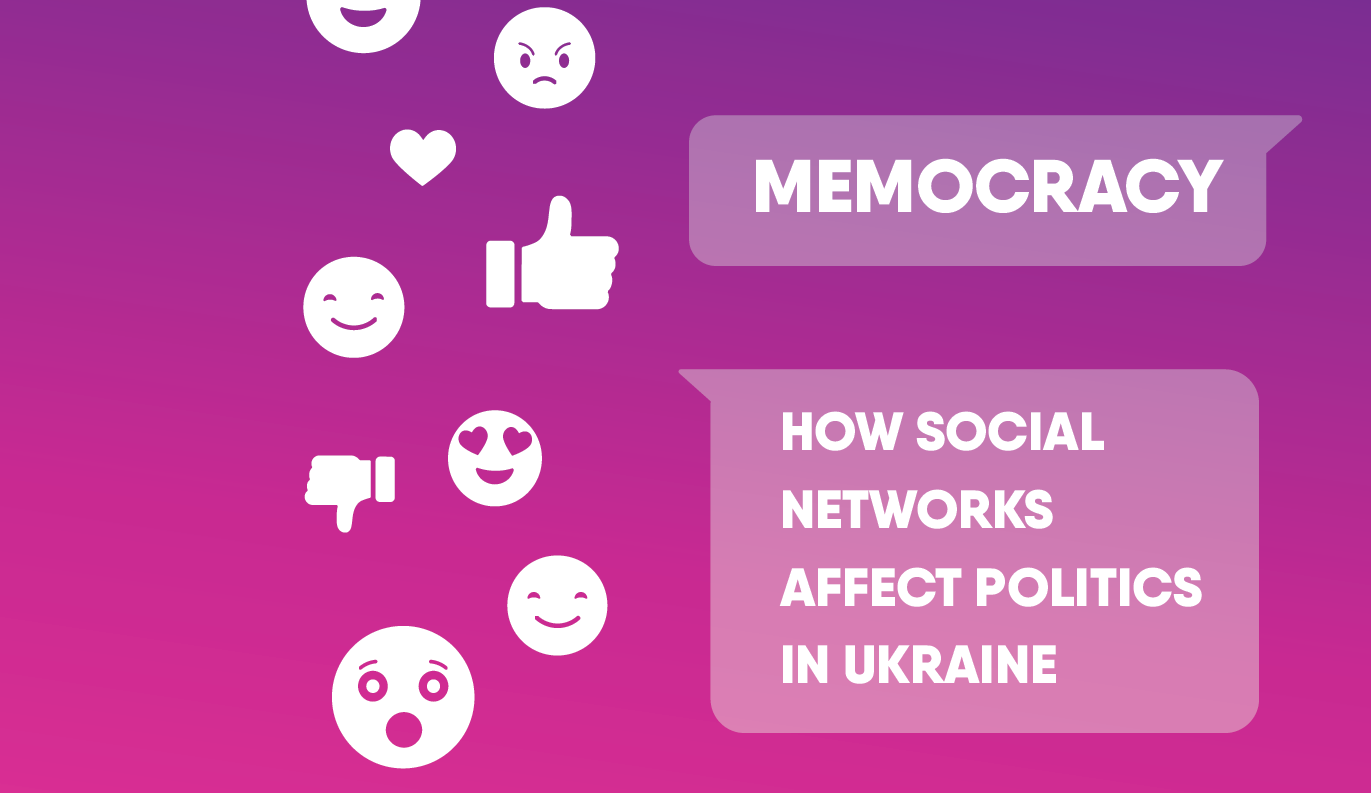 Social networks are no longer just platforms for the free flow of thoughts. Today, they are important and simple tools that help us achieve various goals, including political ones. This year, the presidential election saw a major increase in digitalized campaigning in Ukraine.

Both the presidential and parliamentary elections proved that there is no way for political players to disregard social networks in the race for political victory. The election campaign pushed Ukrainian politicians into the game. Whether they wanted it or not, top contenders for seats in the Verkhovna Rada were the subjects of lively discussions on Facebook, Instagram and VKontakte.Who set the tone for the election on these social networks? Was it politicians trying to become closer to the people at least online? Or was it Ukrainian citizens who were criticizing or endorsing these politicians? What role, if any, was played by Russian propaganda?

In the search for answers, the non-governmental organization Internews Ukraine analyzed data from the three most popular social networks in Ukraine. Our analysts studied thousands of political posts to come up with some theories about the correlations and connections between Facebook, Instagram and VKontakte users' behaviour with the election results, based on the sample below. 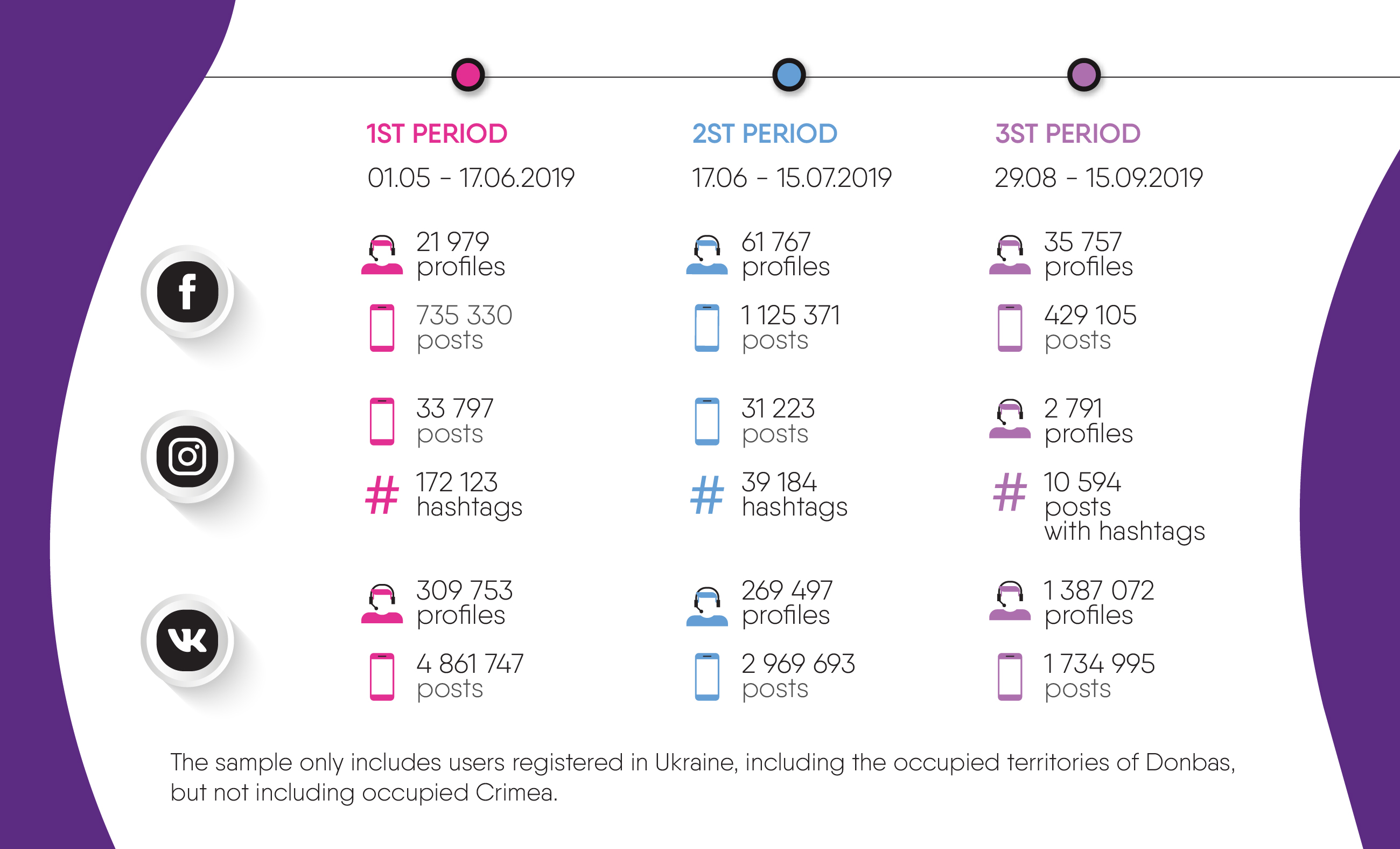 Ukraine is certainly no exception to the current global trend of politicians turning social media platforms into weapons. Judging by the number of political posts from users, Facebook remains the most politicized social network among the three analyzed. However, Instagram clearly surpassed all the others. Volodymyr Zelensky’s victory provides evidence that mastering the features of social networks is key. 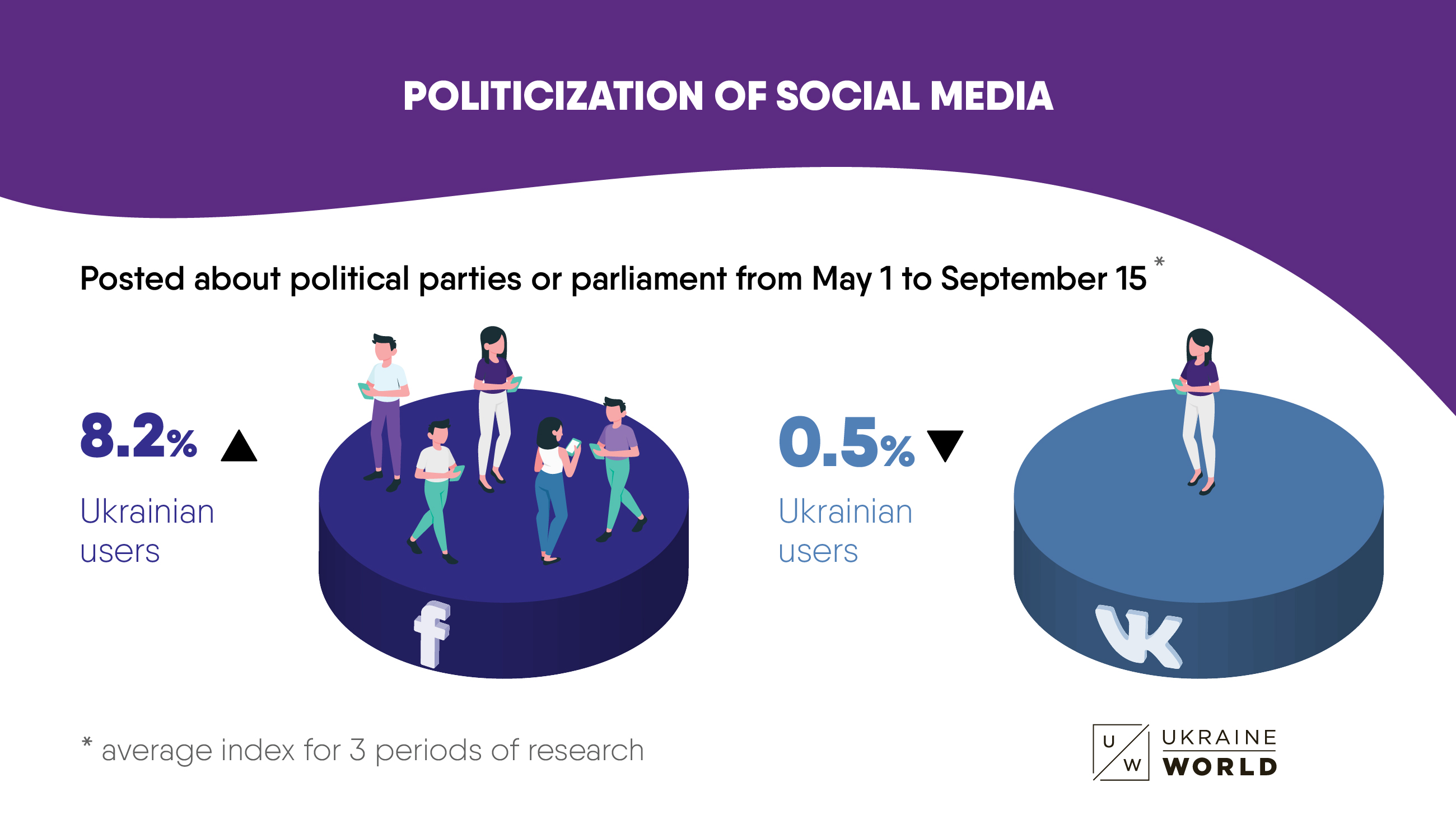 Instagram had the biggest percentage of positive and neutral posts (compared to Facebook and VKontakte), largely generated by Ze-accounts and numerous fan pages. By the time other parties tried to jump in at the start of campaigning for the snap parliamentary election in July, the Servant of the People party was already an expert at making politics likeable in the space that is supposed to be “just for fun”. Ze-hashtags were also used in posts about Servant of the People’s biggest rivals - European Solidarity, Batkivshchyna and Holos.

Not long after the start of the election campaign, Petro Poroshenko’s and Yuliya Tymoshenko’s parties were clearly losing in terms of Instagram activity to Servant of the People. Svyatoslav Vakarchuk’s Holos was able to take full advantage of Instagram and had made a major breakthrough by July. Although this party was still far behind Servant of the People, it did far better than Batkivshchyna in terms of the number of posts, likes and video views. The fact that Holos got into parliament, despite a late start to its campaign, shows that a major investment in social media might just be a crucial part of an electoral strategy and not just a simple communication tool. And other parties underestimated this at their peril. 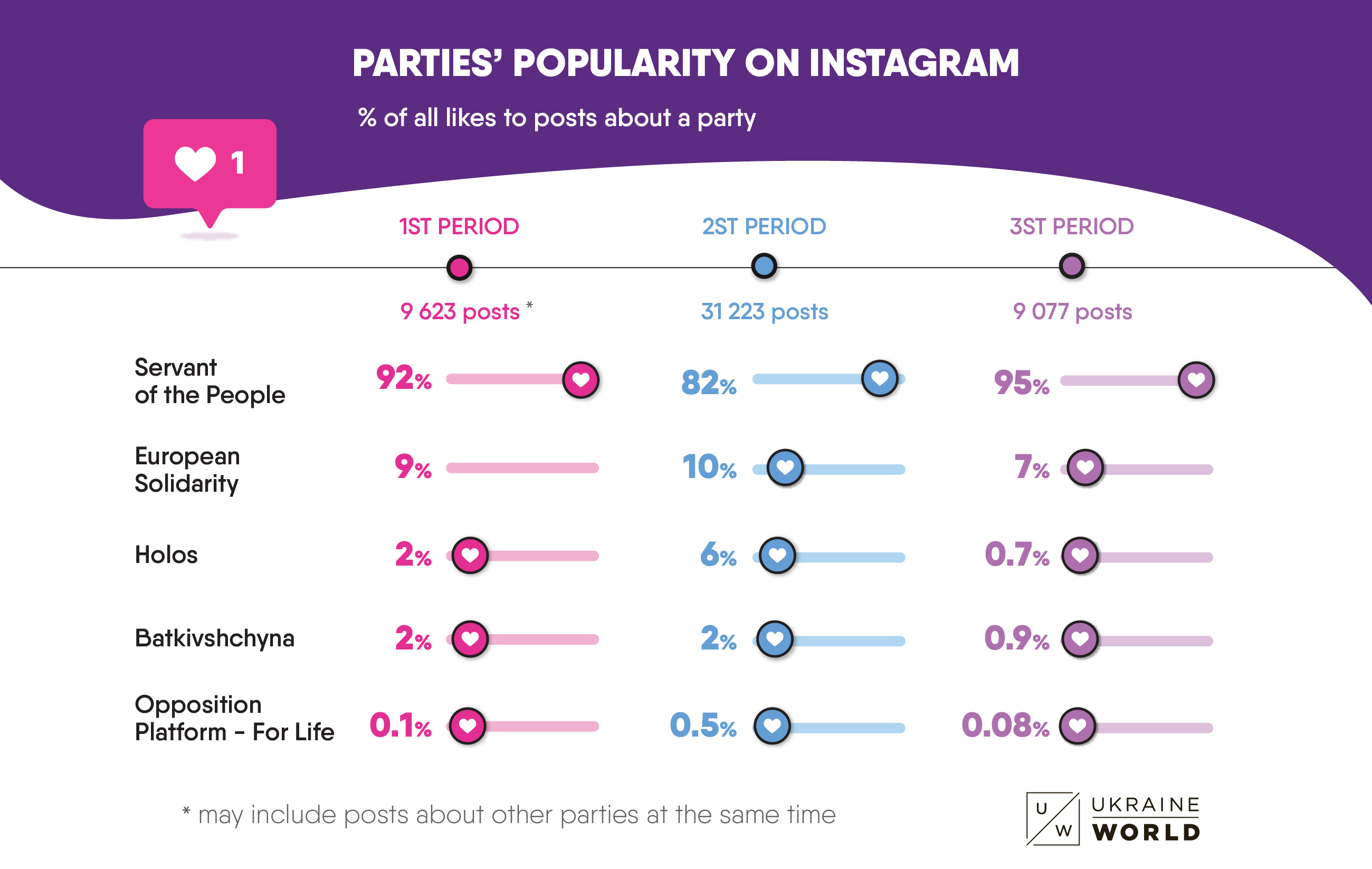 To gain success in the snap parliamentary elections, Zelensky’s team merged entertainment and information to reach out to millions of Instagram users. Servant of the People showed that, unlike serious and “boring” Facebook posts, political messages in easy formats have more potential to turn “likes” and “follows” into real seats in parliament. Sardonic videos, vlogs, selﬁes- all this ﬁts into what people want to see on Instagram. Regardless of whether posted on official accounts or fan pages, pro-Zelensky content proved that information showing aspects of personal life, sharing emotions and exhibiting down to earth behaviour can be no less effective in attracting voters than political ads. Svyatoslav Vakarchukalso used this method to popularize his party. Posts on his daily life, such as a topless picture from Ternopil, were among the most popular ones about Holos. 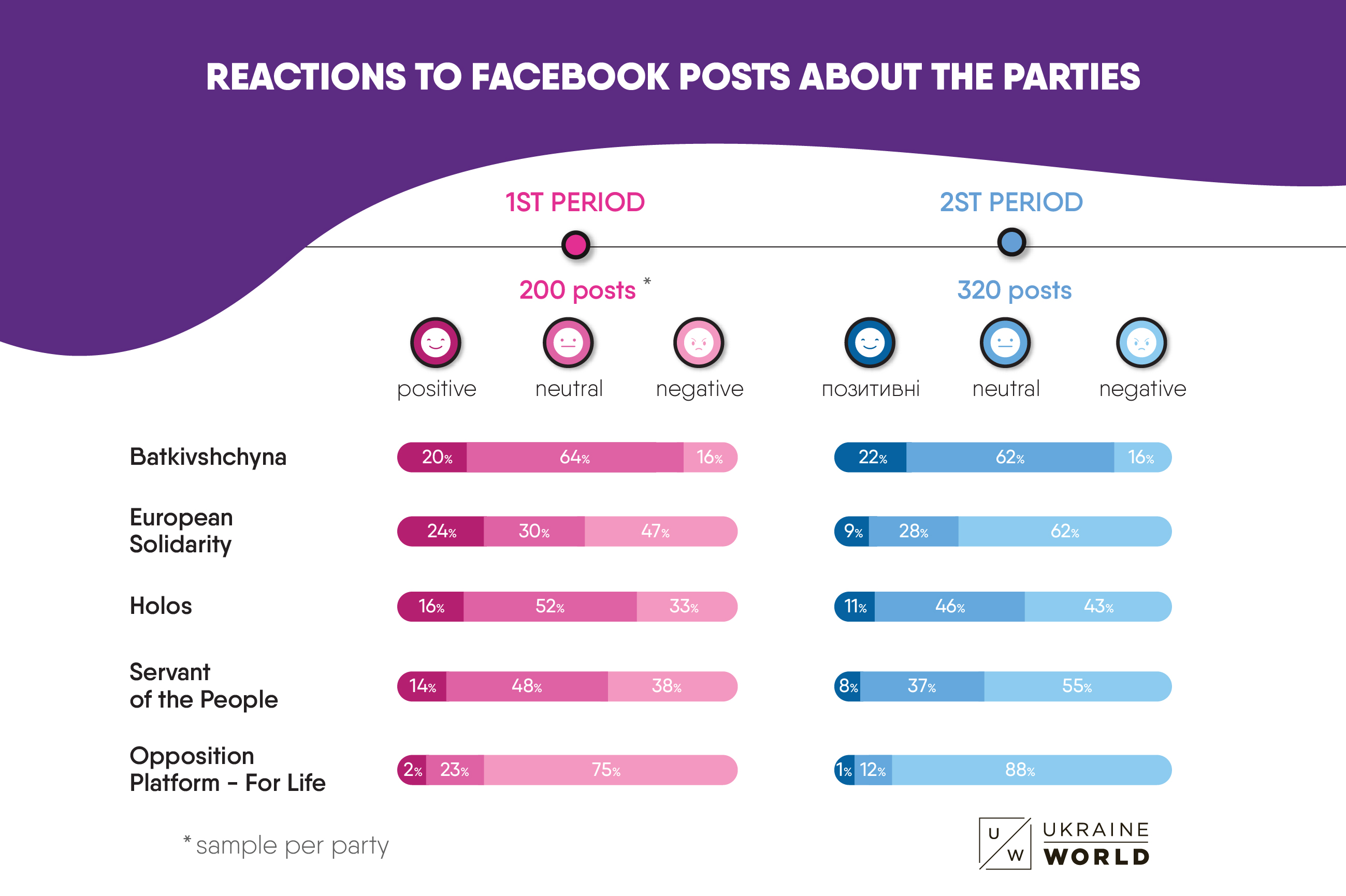 LOVE OR HATE. NO MIDDLE GROUND?

The election campaign also made social media a battleground of opinions. Both Ukrainian Facebook and VKontakte demonstrated the ways in which social media can activate our emotional responses. While Instagram is quite monochrome in its political preferences, Facebook proved to be the most divided. The rivalry between Zelensky’s and Poroshenko’s fans has survived past the elections and turned Facebook into a black and white canvas of mutual accusations and praise of a favoured side.Aggravated emotional posts outweighed balanced viewsamong Ukrainian Facebook users. Moreover, negativity has overtaken positivity in Ukraine’s pre-election and post-election virtual reality (except on Instagram). Facebook posts about the top ﬁve parties got more positive reactions when made by the parties or their leaders themselves.

Nonetheless,after the elections, Facebook’s top posts became more neutralabout parliament. Some of the most liked posts here were based on reasonable criticism with no clear political preference.

The Ukrainian section of VKontakte is fertile ground for anti-Ukrainian hate speech. The reason for this is that the top authors in the Ukrainian section by likes and shares are mostly anti-Ukrainian journalists, analysts, former politicians and separatist militias. Pro-Russian users flooded VKontakte with derogatory rhetoric about Ukraine. Mocking and disparaging remarks on Zelensky’s rule and most of Ukraine’s politicians indicated that no Ukrainian government is good for the pro-Kremlin side if it is still pro-Ukrainian in its intentions. The “failed state” label still fits into a range of the top leitmotifs about Ukraine on VKontakte. However, pro-Russian rhetoric varies from author to author and has no one clear line. The common ground for most of the messages is the same old rhetoric that Ukraine is dependent on the US, that its economy is in decline and Ukrainian people are “dull”.

Facebook and Instagram are not free from Russian propaganda and disinformation either. But their Ukraine sections are far less dominated by anti-Ukrainian agitators. On Instagram and Facebook, pro-Kremlin messages rarely made it to the top posts about Ukrainian elections or parliament.

While nothing is surprising in the disapproval of Ukrainian parties and the new president, one thing is clear.Pro-Russian VKontakte is not fond of pro-Russian parties in Ukraine either. What Ukrainians call “pro-Russian” in Kyiv is quite a light version of what “pro-Russian” means for Kremlin-oriented VKontakte users.

While the Opposition Platform For Life is perceived as pro-Russian in Ukraine, on VKontakte this party is criticized for being weakin terms of its political orientation. VKontakte users also see its members as “traitors” or as too disorganized to push the Russian agenda in Ukraine. While pro-Russian VKontakte often mentions Viktor Medvedchuk, Putin’s crony, as though he follows his own personal interests, the pro-Ukrainian camp bashes him for toxic pro-Kremlin activity.

In fact, Russian narratives are multi-vector, and the pro-Kremlin vision reaches further than Ukrainians even imagine. 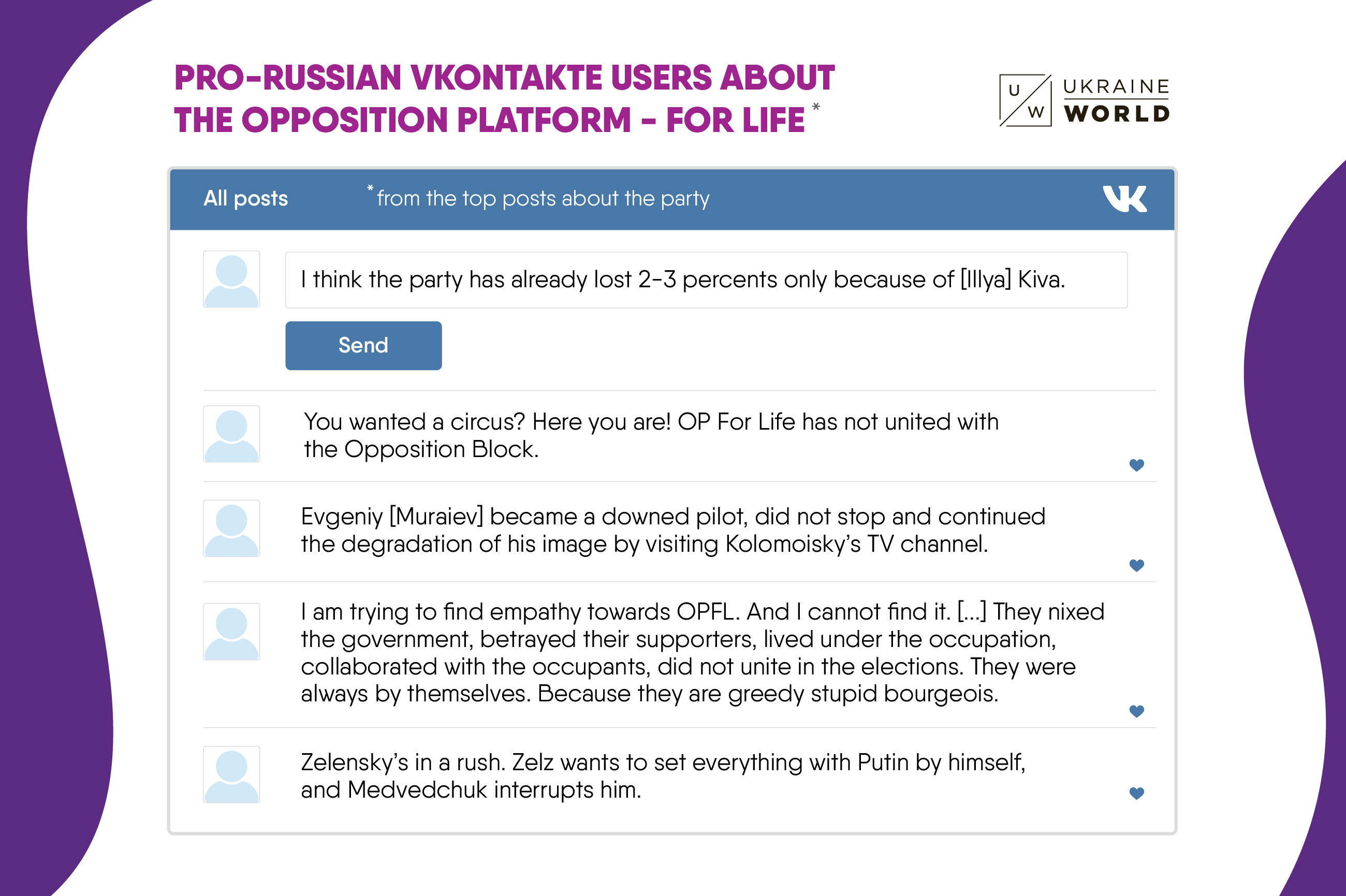 USERS EMBRACE ALGORITHMS, AND POLITICIANS TOO

VKontakte throws shade on all Ukrainian victories. Facebook is used as a battleﬁeld for pro-Ukrainian users of opposing political views. A review of Instagram could make you believe that an absolute majority is satisﬁed with the new government. All of this creates an illusion that reality is either too polarized, or doomed, or too good to be true.

On Facebook, Instagram and VKontakte people select the information bubbles they live in. Our analysis conﬁrms that users jump into these traps regardless of the speciﬁcs of the social media platform. On Facebook and Instagram, algorithms play their part. They do this by feeding their users with content they want to see, and thereby aggravate their emotional reactions. This makes the supporters of both Zelensky and Poroshenko especially ﬁerce on Facebook. VKontakte users are isolated in their pro-Ukrainian and pro-Russian dimensions, which never intertwine.

All these echo-chambers of like-minded people breed messages of extremes, which makes it difficult to ﬁnd a balanced view. Ukraine’s parliamentary election demonstrated that virtual political cages are one of the factors that may shape election results.

We conducted a comprehensive three-stage data research on the Ukrainian Facebook, Instagram and VKontakte. To track the dynamics and change of moods, experts of Internews Ukraine ﬁrst analyzed two periods before the voting day (1.05–17.06 and 17.06–15.07); then, around 400 Facebook and VKontakte posts after the elections (22.07–28.07); and ﬁnally, one period when the new convocation of the Verkhovna Rada started its work (29.08–15.09). 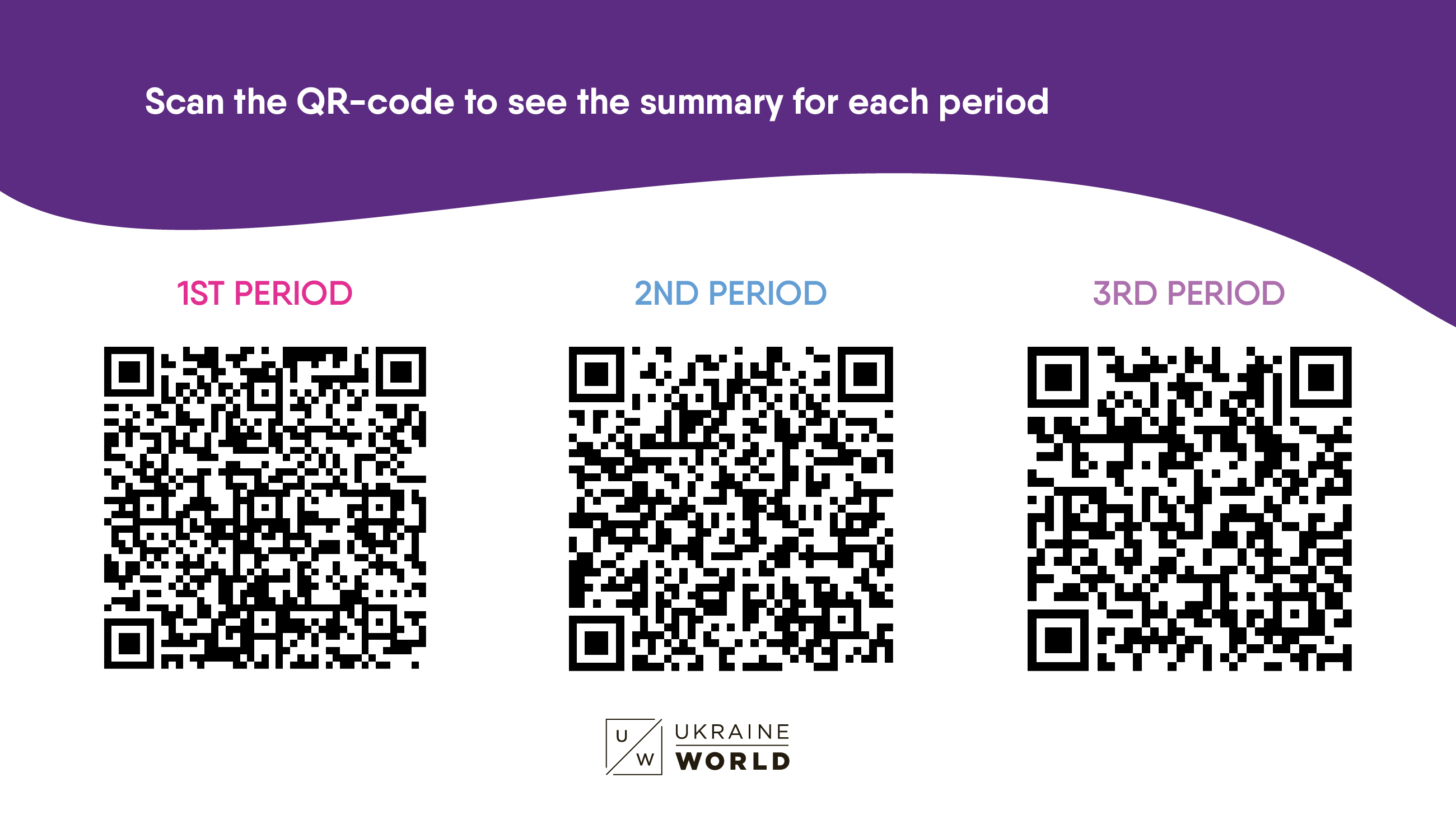 This study was conducted by analysts of Internews Ukraine in collaboration with the analytical company Singularex using neural networks and artiﬁcial intelligence approaches, namely:

Ukraine’s President Petro Poroshenko finally announced that he will seek reelection at a packed forum on January 29 in Kyiv.
Infowars
August 20, 2019

Following a public call for ideas, the Festival’s programme includes those topics that matter most to its participants. Russian-speaking participants raised a conversation...