August 28, 2019
The social media activity of both political parties, as well as ordinary users, largely defined the results of the snap parliamentary elections in Ukraine. While little has changed in the behaviour of Ukrainians on Facebook, Instagram, and VK since the start of the pre-election campaign, some tendencies do correlate with the results. 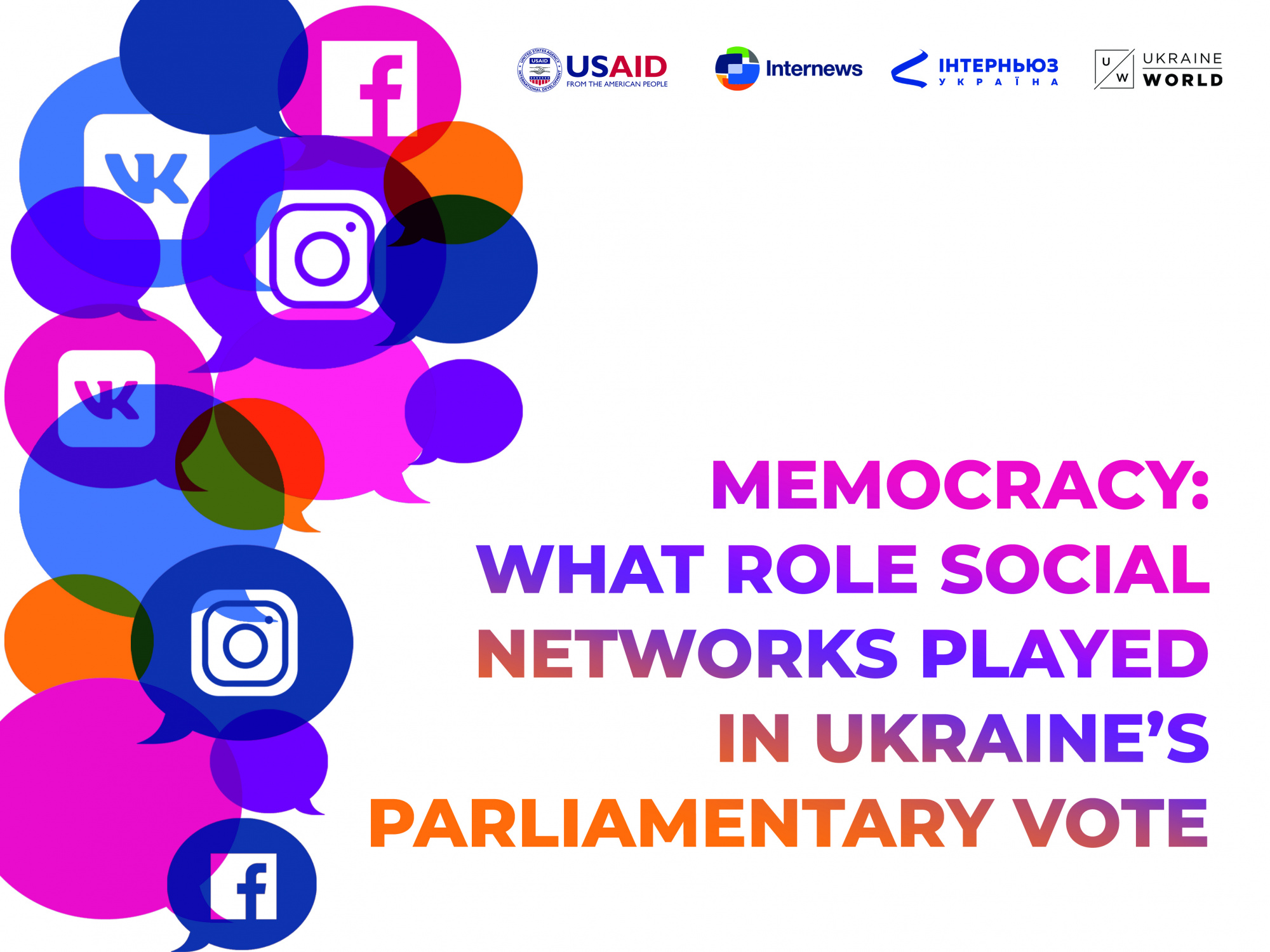 To see how narratives about Ukraine's political parties have changed before and after the elections, Singularex and Internews Ukraine analyzed the Ukrainian segment of the three most popular social networks in Ukraine, namely Facebook, Instagram, and VK.

Our analysts dug into the relative top opinion leaders, top posts, internal and external sources, as well as hashtags to follow reactions to the latest stage of the parliamentary elections campaign. In the period from June 17 to July 14 2019, we analyzed:

To understand how Ukrainians reacted to the results, we studied almost 400 top posts on Facebook and VK about Parliament and the top 5 parties. In the period of July 22-28, we looked into data from:

The research was carried out upon an initiative by the NGO Internews-Ukraine, with Neural Networks and methods of Artificial Intelligence, namely:

1. Polarization between Poroshenko and Zelensky faded

The usual division of Ukrainian Facebook and VK communities by the presidential race had changed with a reshuffle of positions in ratings ahead of the parliamentary elections. The rivalry between supporters of Volodymyr Zelensky and Petro Poroshenko faded on all three social media platforms. Top 50 Facebook posts on Ukraine's elections became more diverse in opinions, dispersing criticism among different parties. Likewise, Ukrainian VK users were rather polarized on ideological than on political grounds. Both pro-Ukrainian and pro-Russian VK blocks criticized the incumbent president, as well as all parties, including the Opposition Platform and Shariy's Party, traditionally perceived as Russia-friendly. On Instagram, the most popular hashtag on Zelensky was four times greater than that of Poroshenko (9,642 to 2,259 users, respectively). 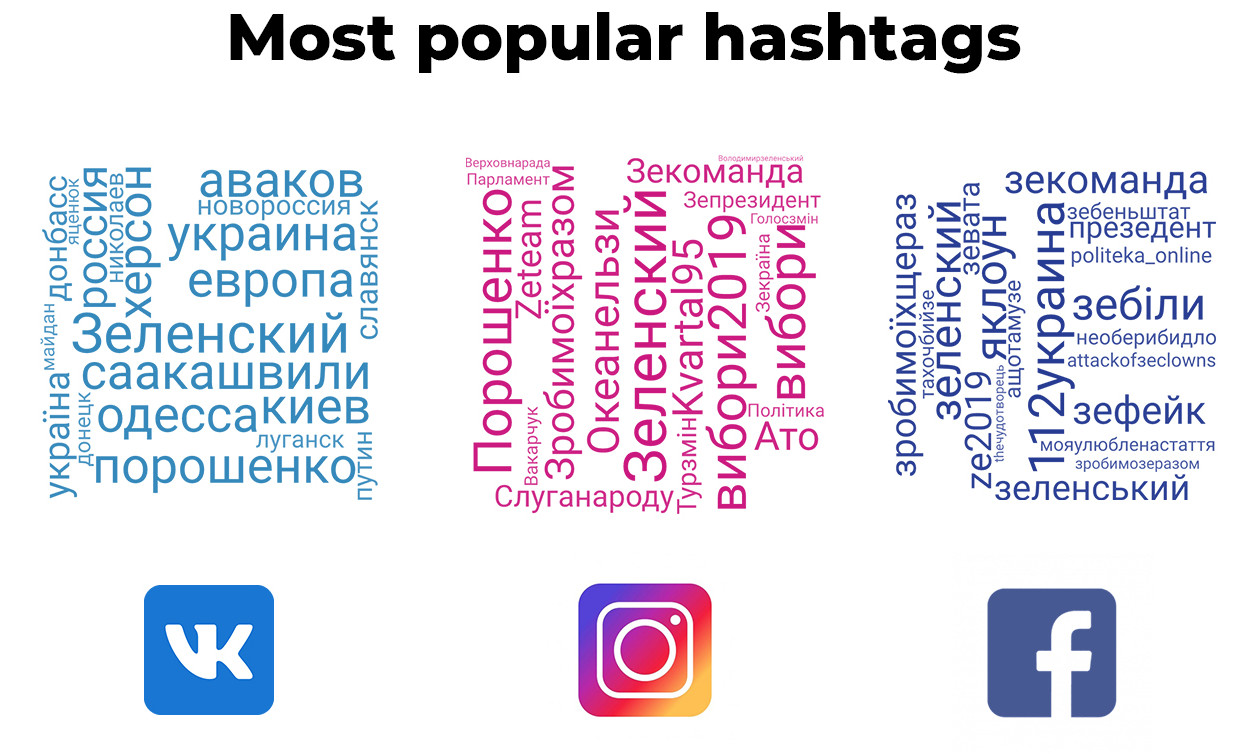 2. Zelensky is discussed the most

In line with the election results, Zelensky got most of the attention on all three social networks. VK users posted four times more about his party, Servant of the People, than on Poroshenko's European Solidarity. Although the official pages of the latter and the Opposition Platform made it to the top on Facebook, its user activity proved different. While posts about OP and ES got 27% and 9% of Facebook users' reactions, the number accounted for more than 61% of all posts for Servant of the People. Zelensky's party also had twice as many mentions as all posts about the other four parties together (17 945 to 9 519, respectively). On Instagram, the number was more than double. 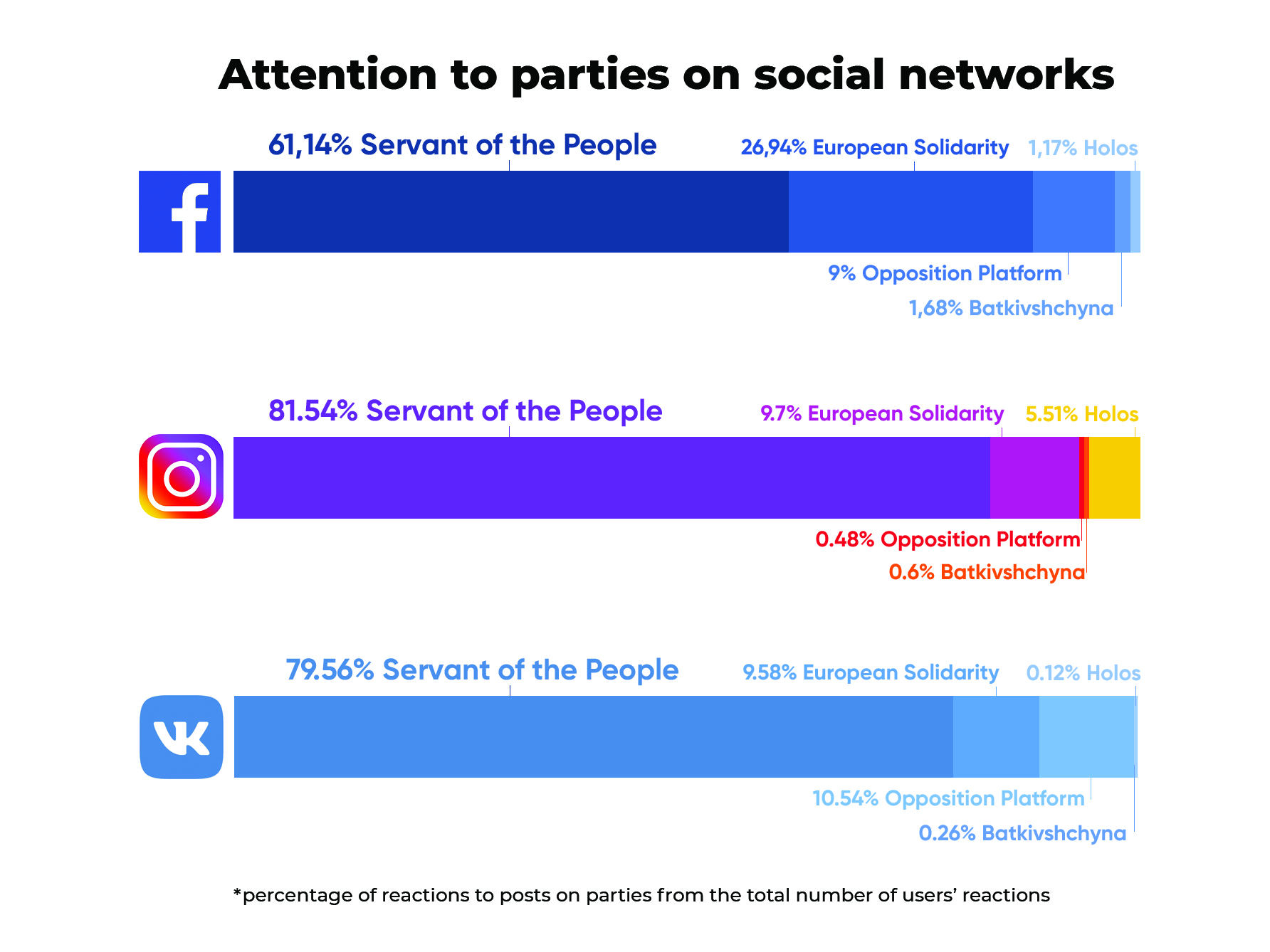 3. Servant of the People as the new scapegoat

Finding himself in the spotlight, Zelensky was often slagged off both on Facebook and on VK. In the top posts about elections and the party, in particular, negative rhetoric prevailed over positive rhetoric. On Facebook, Zelensky had more positive reactions than other candidates or parties. Nonetheless, Facebook users often criticize his appointments and "Ze-MPs" for "nepotism" and their lack of experience. Such topics are common subjects for VK's pro-Russian opinion leaders, in addition to the war-related posts, commonamong users alike. The latter often mention Zelensky with hashtags about shelling in Donbas, "terror", "DPR", "war", etc. As on Facebook, VK's most active and popular pro-Ukrainian users, who are mostly Poroshenko's supporters, blame Servant of the People and Zelensky for similar reasons, while praising Poroshenko. This negativity also flows through Facebook top hashtags such as "I am a clown" (#яклоун), "Zediots" (#зебіли), etc.

In terms of reactions, Instagram remains Zelensky's safe haven. Unlike other parties, Servant of the People has a wide range of accounts and profiles which work for the benefit of its reputation. Those are numerous fan clubs (ze.country, zeukraine.2019, zelenskiypub, mr.zelenskiy, zelenskiy.95, zelenskiyfans), accounts devoted to Kvartal-95, its members and other projects (Laughter League, his comedy project). In fact, Servant of the People owes its popularity to Zelensky's authority among Ukrainian Instagrammers. Hashtags featuring Zelensky were still quite common to promote his party.

In spite of Ze-dominance, the record-high number of posts about the Servant of the People (82% in the first period) dropped to 60%. The shift of powers on Instagram also turned into a significant loss for European Solidarity. Its share of posts fell from 17% to 8.5%. Here, the Opposition Platform and Tymoshenko's Batkivshchyna fell far behind. Related or not, Instagram was a success story only for Sviatoslav Vakarchuk's party. As expected, Holos managed to mobilize its power ahead of the elections, having increased its presence to 13% (compared to 5% in the previous period). Similar to the Servant of the People, Vakarchuk used his popularity to add potential voters to his party via his personal account. Some of his top posts gathered three times more likes than those by golos.zmin, the party's official account (1500 likes per post). With no popular Facebook pages, except for the official Holos account, this party was covered by the most significant amount of unique authors there (82% out of all who posted about Holos). 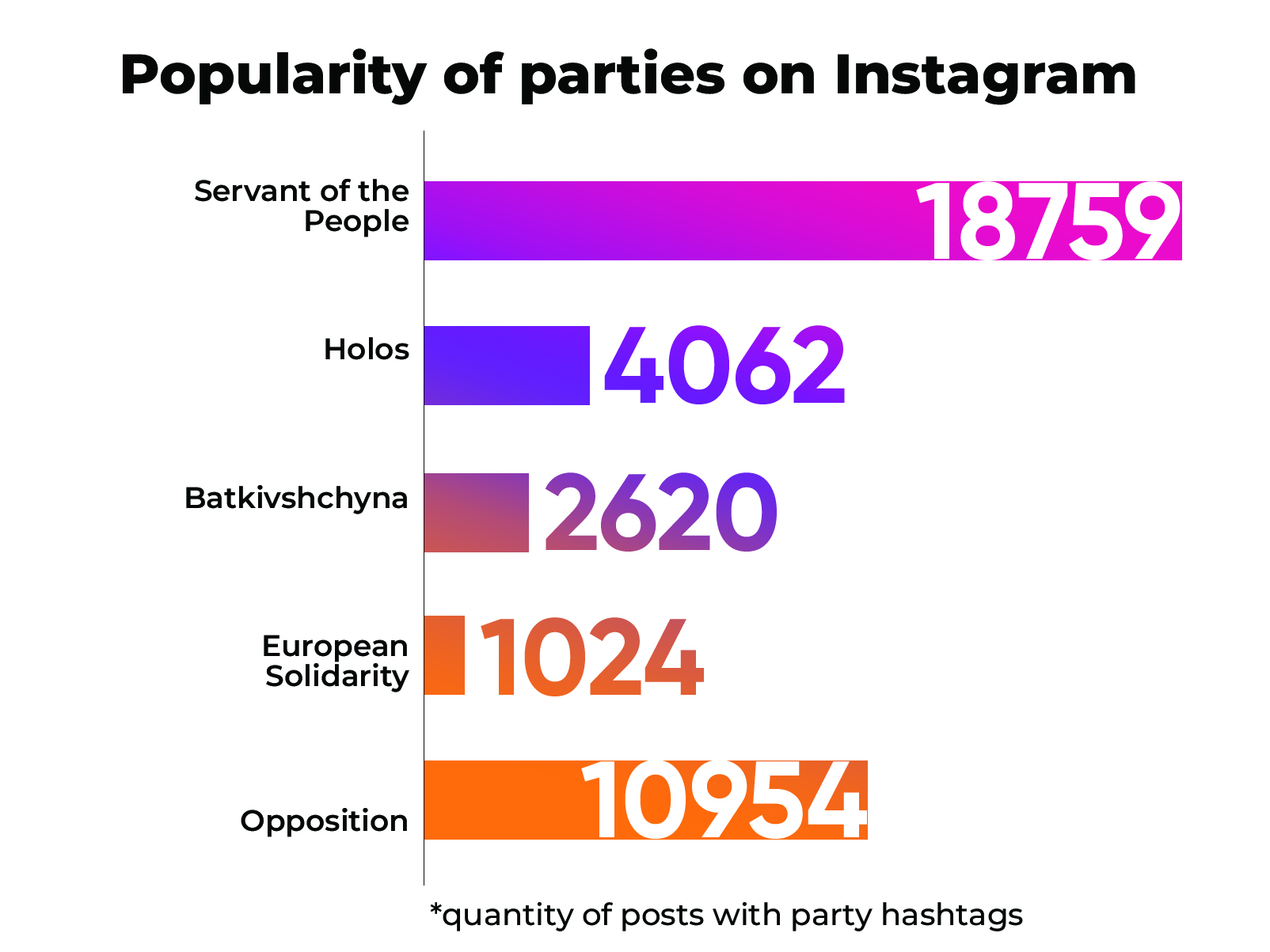 6. No mercy to anyone: negative rhetoric prevails

On Facebook, negative rhetoric has still prevailed over positive rhetoric concerning all parties, except for Batkivshchyna. Negative posts accounted for 53% in contrast to 10% of positive ones and 37% of neutral ones. Meanwhile, the official Facebook pages of political parties had the reverse trend: 98% of all posts for all parties, except for OP, were positive. On VK, the trend for negativity has amplified since the start of the campaign about the top three parties that are visible in top posts. On Instagram, positive emotions outweighed negative ones in posts about all parties, except for European Solidarity (49% negative, 29% positive posts). Even the Opposition Platform, despite its rather minimal visibility on this social media, gained 52% of positive Instagram reactions (23% were negative ones). Notably, Holos got the biggest amount of positive reactions (75,5%), almost 10% more than the Servant of the People. 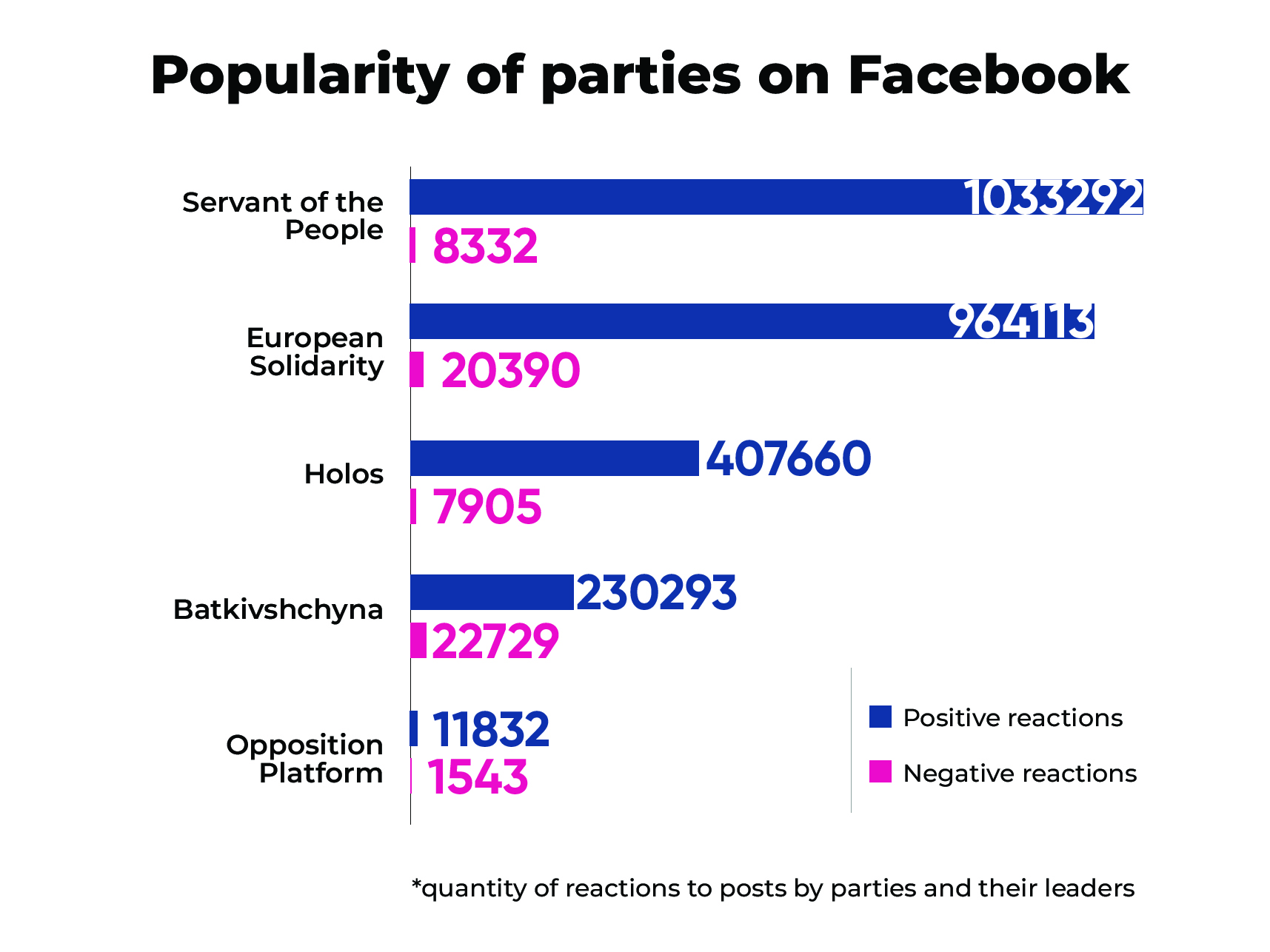 7. Links with Russia as a red flag

Waves of harsh criticism against the Opposition Platform gained momentum on Facebook. Almost 88% of the party-related posts on Facebook were negative, and only 0.6% of positive rhetoric was seen. Boiko's party is often blamed and shamed along with the Opposition Bloc and Shariy's party. Facebook users called them 'murderers', 'Ukrainophobes', 'bloodstained' and 'Putin bastards'. Some users appealed to voters of these parties in a negative context: "how can we live in one country?". Although Opposition Platform received five times fewer posts on VK than Servant of the People, this party has the biggest amount of reactions, albeit mostly negative ones, in proportion to the number of posts about it (a quarter more than Servant of the People). Likewise, on Facebook, VK pro-Ukrainian users referred to OP as the "three-headed 'Medvedchuk-Rabinovich-Boiko' dragon" which Zelensky and his team hardly oppose.

8. Pro-Ukrainian users did not give up on VK

Unlike in the rest of Ukraine, VK remains accessible in the occupied Donbas, from where most of the posts come. As a result, VK users with a pro-Ukrainian standpoint failed to compete with the pro-Russian ones in terms of dissemination of messages. However, they remained quite active in countering the pro-Russian narratives about Ukrainian politics. A Poroshenko supporter from Kharkiv was one of the top opinion leaders by the number of reactions (5,130 in total). To compare, the pro-Russian political analyst from Donetsk got twice fewer reactions (2235) and 20 times fewer posts about the Ukrainian elections in general. Nonetheless, VK's top list of Ukrainian users is mainly pro-Russian or supportive of the self-proclaimed republics in Donbas. 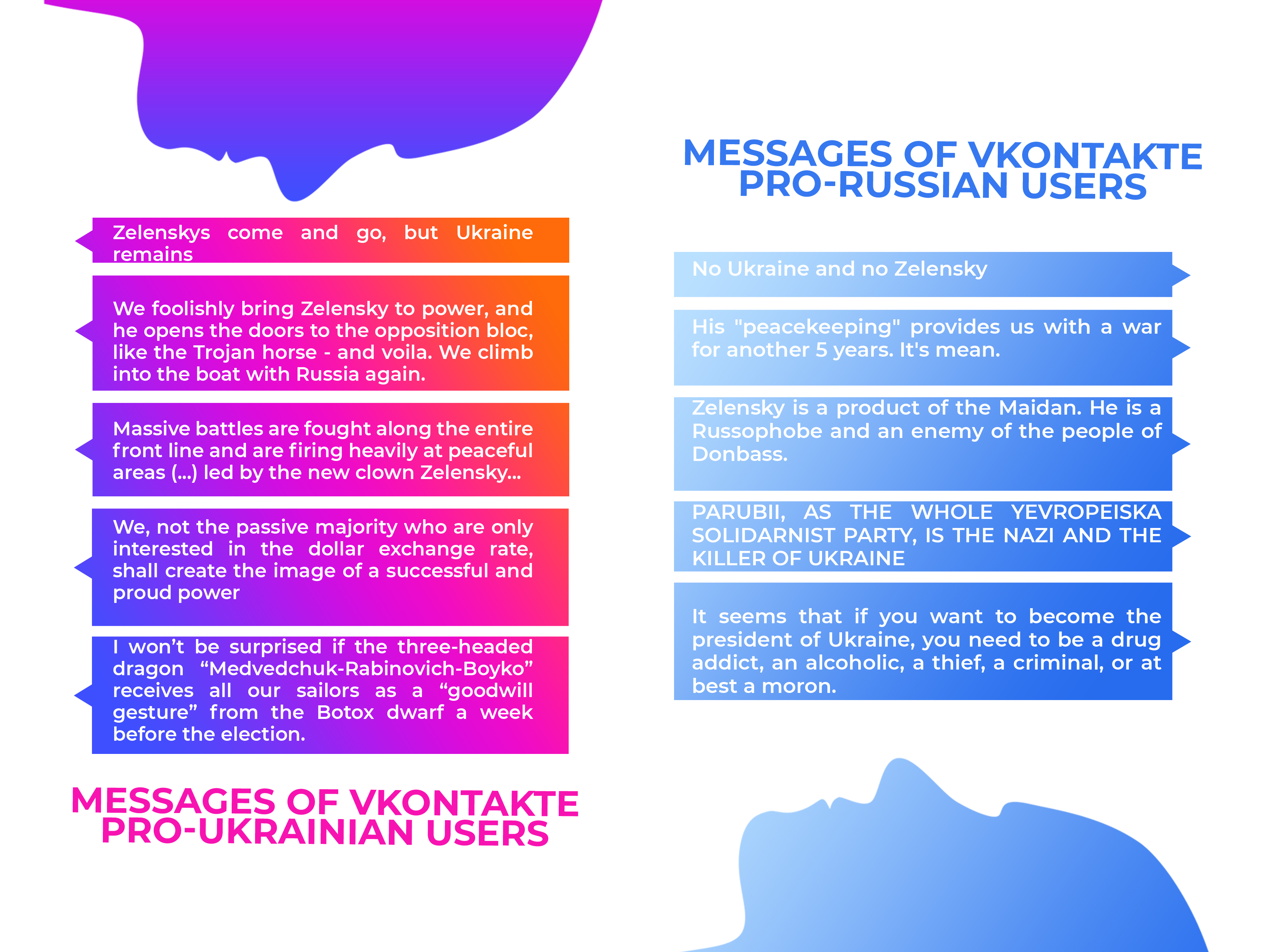 The domination of Pro-Russian views on Ukrainian parties and elections was clearly seen in VK's common hashtags and information sources. Some top hashtags about the elections referred to Maidan, Crimea, "Novorossiya". To underline intolerance towards anything Ukrainian, VK's users spread messages under the Kremlin's label for Ukraine as a failed state (#страна404), and for the Ukrainian media (#укросми). One of the top posts named Ukraine as "a country of unlearned lessons". Notably, some of the most popular topics of discussion included the infamous TV-bridge between NewsOne and a Russian propaganda channel Russia24. Its cancellation sparked a surge of posts on July 8 when the event had taken place. Concerning the war in Donbas, its users lambasted all future Ukrainian MPs for their words or initiatives, even Medvedchuk. Some separatist leaders also called to ignore a campaign "Zelensky, recognize the choice of the Donbas", stressing on their "independence" from Ukraine.

10. Similar reactions persisted after the elections

In the first week after July 21, little changed. The record-high results of the Servant of the People spurred in the number of posts and reactions on Facebook. The most popular post about this party (8,900 likes and 8,100 shares) bashed Zelensky for failing to help the Ukrainian delegation in PACE. European Solidarity, with 5 200 likes and 60 000 shares per post, was the second most debated, albeit in a negative sense. Other posts about those parties were both critical and hopeful. Ukrainian Facebook remained united in its adverse reaction to the Opposition Platform, though the most popular post gathered less than 1k likes.

VK proved to be indifferent to the results of the elections. The most popular post (106 likes), made by an anti-Ukrainian user, mocked Servant of the People's leader Dmytro Razumkov, who said there would be no amnesty for Russian-backed militants in Ukraine.

Anti-Western propaganda is growing in the Ukrainian information space. It is fuelled by pro-Russian politicians and media, some popular bloggers and oligarchs-aligned...
PODCAST
October 29, 2020