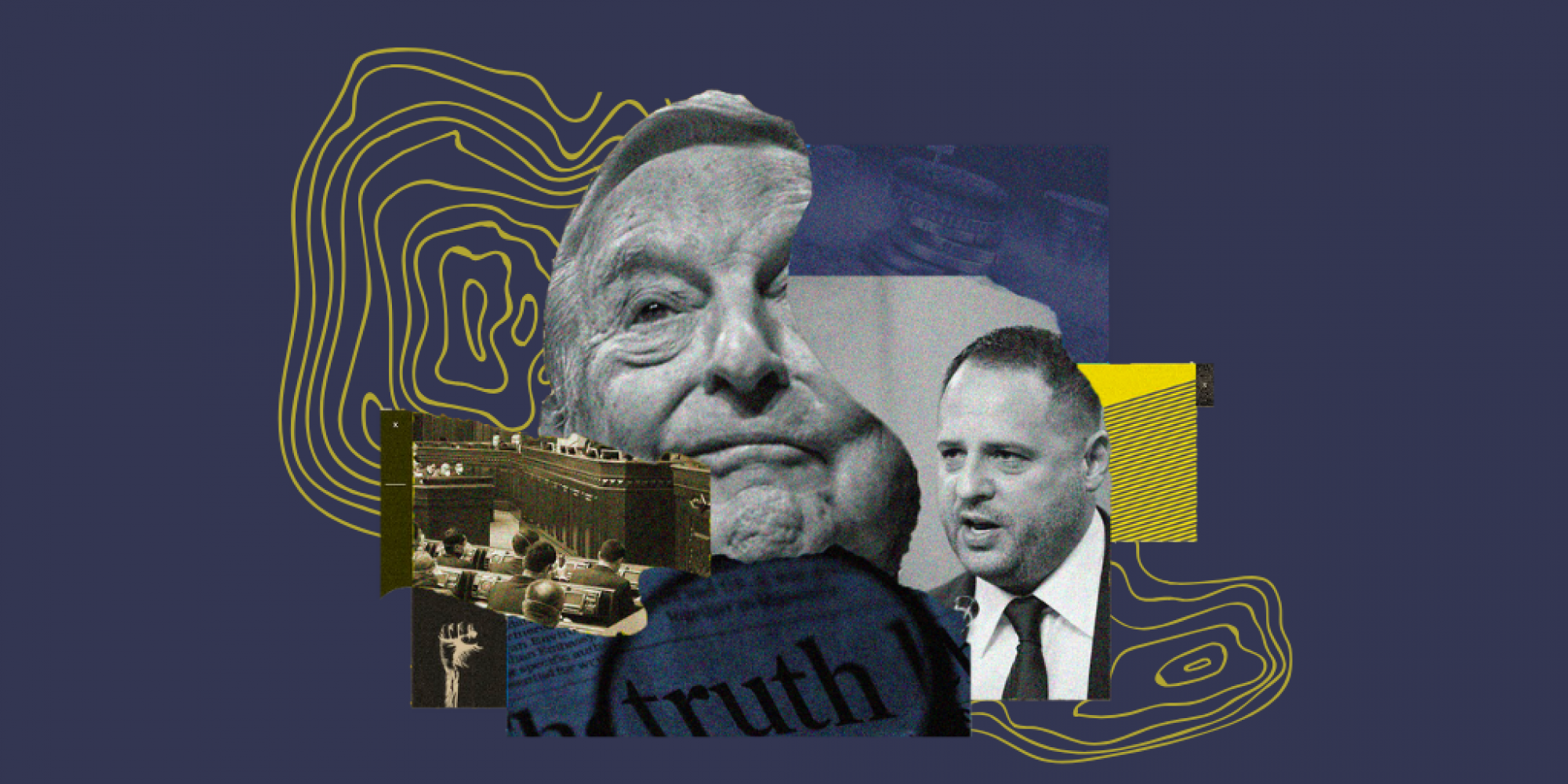 In past years, but especially after the 2019 elections in Ukraine, anti-Western and anti-democracy messages became increasingly more widespread in the Ukrainian information space. They are aimed at undermining trust in democracy and creating a monstrous image of the “West” (“Europe”, “America”, “Soros”, “IMF”) trying to destroy Ukrainian sovereignty. They are traditionally disseminated by Russian and pro-Russian information actors, but have now been joined by increasingly visible Yanukovych-era “revanchist” politicians (Andriy Portnov, Olena Lukash, etc.); forces close to oligarch Ihor Kolomoyskiy, and even by the formerly pro-Western “Orange revolution queen” Yulia Tymoshenko.

Internews Ukraine and UkraineWorld.org have begun publishing a regular screening of these messages. We will publish regular weekly and monthly reports, and also provide "alarm" coverage of specific narratives when they appear.

During the last two weeks the following anti-Western narratives have been the most popular in Ukraine's information sphere:

On 30-31 March Ukraine's Verkhovna Rada adopted the long-running agricultural land market law and took the first step in adopting the law prohibiting restitution of nationalized banks. These were the IMF's requirements prior to provision of a loan which would allow Ukraine to avoid default. Hence, anti-Western actors posed this development as another step in the process of Ukraine turning into a "banana republic" controlled by the West.

People from Ihor Kolomoyskiy's group of influence have been criticizing these laws and hinting at Western influence. Max Buzhanskiy, a blogger and MP from Servant of the People party writes on Facebook that "Ukrainian land has been merely made a guarantee for the IMF's pawn shop", while the banking law "allows the stealing of someone else's business with no right to challenge this in court."

Similar rhetoric can be seen in the posts of Oleksandr Dubinskiy,  an MP from Servant of the People party and a popular blogger from Kolomoyskiy's team. He writes that "sorosiata" who have been promoting the banking law "did not even read it" and that the law legalises "5 years of raiding in the banking sphere led by Gontareva and Rozhkova [former management of the National Bank of Ukraine] and covered by Poroshenko." Dubinskiy adds that "sorosiata" do not care for this, they are merely getting paid to allow their "masters" to "squeeze the last [resources] out of Ukraine."

Olena Lukash, a former member of the Party of Regions and Ukrainian justice minister (2012-2014) in the government of Mykola Azarov, writes on Facebook that these two laws go hand in hand, and their main goal is to allow foreigners to buy land without limits. "Banks of any type of ownership, including foreign ones, can buy out land which has been pawned. They can buy out such land with no limits," Lukash argues hinting that this is a loophole for foreigners to buy up Ukrainian land.

Anatoliy Shariy, a popular YouTube blogger, started calling the Servant of the People party "Servant of the IMF." Additionally, Shariy argued in the "manifesto of the Shariy Party" aired on the 112 Ukraine TV channel (controlled by Viktor Medvedchuk) that Servant of the People has betrayed Ukrainians. "They united with European Solidarity and Holos [factions] to sell Ukrainian land. Ukraine is selling the only last asset it has in the wake of the political, economic and healthcare crisis," Shariy argued.

Thus, there is a silver lining in all the messages from anti-Western actors: President Zelensky and his Servant of the People party have sold out to the IMF and to the West.

A network of pro-Kolomoyskiy and anti-Western Telegram channels, which includes the Shadow Anonymous, Sorosiata and Tiomnyi Rytsar channels, published a theory that the so-called "Yermak tapes" were leaked by "sorosiata" in order to attack President Zelensky via Andriy Yermak, the head of his office. According to the theory, the National Anti-Corruption Bureau of Ukraine, MPs who "support Soros" and Radio Svoboda are working together to take down Yermak.

Oleksandr Dubinskiy, an MP from Servant of the People party and a popular blogger of the Kolomoyskiy team, goes further and argues that "sorosiata headed by Mykhailo Tkach" (an investigative journalist from Radio Svoboda) "are implementing an instruction of curators from Washington."

Soros creates a new party in place of failed Holos

According to Tiomnyi Rytsar, an anonymous pro-Kolomoyskiy and anti-Western Telegram channel, the Ukrainian branch of the International Renaissance Foundation has been curating the creation of a new political party headed by Oleksiy Honcharuk, who lost his position as prime minister of Ukraine only last month, and Vitaliy Shabunin, an anti-corruption activist.

This topic has been further developed by Klymenko Time, an online outlet controlled by Yanukovych ally and former Minister of Revenue and Duties of Ukraine, Oleksandr Klymenko. According to the outlet, Honcharuk and Shabunin will be joined by Ruslan Riaboshapka, former Prosecutor-General of Ukraine and Oleh Sentsov, a Ukrainian activist and former prisoner of the Kremlin. This new party is allegedly being created instead of "dead Holos" to compete with the Servant of the People party and represent the interests of George Soros.

Strana.ua, the website which is very critical of the EU and NATO, published an investigation into the All-Ukrainian Online School initiated by President Zelensky. Within the auspices of the project, Ukrainian teachers hold video lessons on various subjects of the school program for grades 5-11. A few factual mistakes have already been found in the content of Mathematics and History lessons.

According to a Strana.ua article, this project is being implemented by Osvitoria, an organisation financed by Vasyl Khmelnytskyi, a Ukrainian businessman. "However, there is another financial partner - the Renaissance Foundation of George Soros," the article states. Another organisation working on the All-Ukrainian Online School - Educational Era - is also financed by the West, Strana.ua argues. "The fact that Western donors finance these organisations says a lot," the author of the article claims.

This narrative was also spread by pro-Kolomoyskiy and anti-Western Telegram channel Sorosiata. Additionally, the channel argued that Olena Burdun, a Mathematics teacher who made a mistake in an online lesson, is a "sorosionok" herself as "she has been receiving grants from the Renaissance Foundation."

Ukrainian statehood is relatively young, but its political culture has a vast legacy that is continuously reflected in Ukrainian elections. What are the main characteristics...
VIDEO
July 14, 2018