January 18, 2021
Olga Tokariuk, a co-author of the documentary about Vitaliy Markiv case, analyzes the role of Russian propaganda in distorting facts that almost destroyed his life. 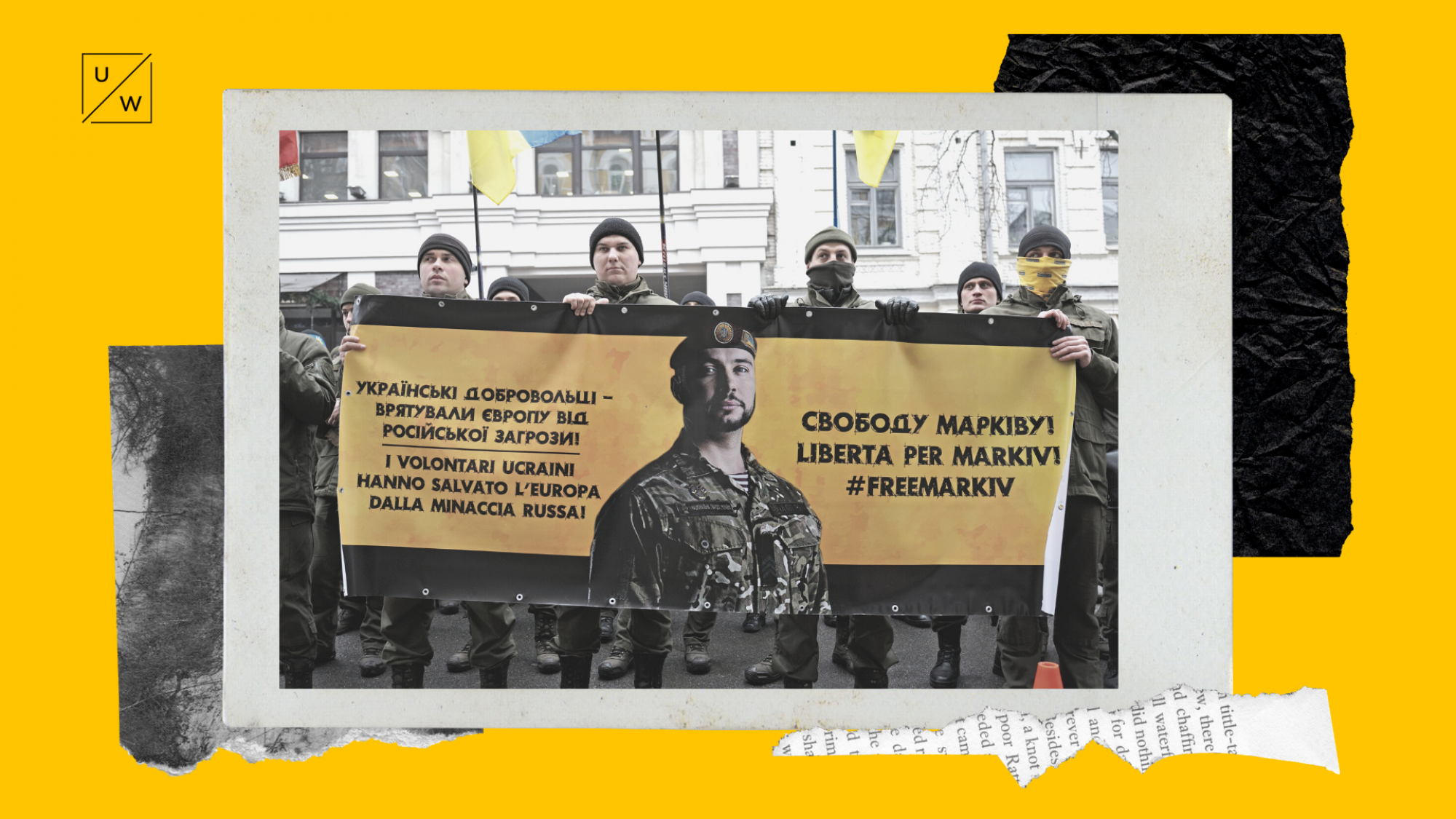 On November 3, 2020, the Milan Court of Appeals overturned the conviction and 24-year sentence of Ukrainian soldier Vitaliy Markiv. In 2019, he was sentenced in the first grade for complicity in murder of the Italian photojournalist Andrea Rocchelli in war-torn Eastern Ukraine in 2014. A dual citizen of Ukraine and Italy, Markiv was cleared of all charges and immediately released. After spending more than three years in a high-security Italian prison, he is now back in Ukraine. However, key questions about his case remain unanswered, including about the role Russian propaganda and disinformation about Ukraine played.

24 May, 2014: Italian photographer Andrea Rocchelli and Russian dissident Andrei Mironov are killed in the outskirts of Sloviansk in Eastern Ukraine, then occupied by Russian special forces and local proxies. French photographer William Roguelon survives the attack.

30 June, 2017: Dual Ukrainian-Italian citizen Vitaliy Markiv is arrested at Bologna airport when arriving to visit his mother after more than three years of service in Ukraine's National Guard. He is charged with Rocchelli's murder.

July 2018: The trial against Markiv opens in Rocchelli's hometown of Pavia, 50 km from Milan. The charges are changed from 'deliberate murder' to 'complicity in murder'. There is no direct proof of his involvement, there was no investigation done at the scene and the prosecution uses Russian propaganda sources in its reconstruction of events.

October 2019: An explanation of the Pavia court's sentence is released. It includes many passages about the modern history of Ukraine, the Maidan protests and the war in Donbas which are factually incorrect and resemble the Russian propaganda narrative.

28 September, 2020: The appeal against Markiv's conviction opens in Milan

November 3, 2020: Markiv is acquitted by the jury of the appeals court

The case against Vitaliy Markiv in Italy was based on purely circumstantial evidence. As lawyers familiar with the case note, there was no proof of Markiv's criminal intent or his presence at the scene on the date and time of Rocchelli's death, let alone of his physical ability to identify and target Rocchelli. Alongside the criminal case against Markiv, a civilian complaint was filed by the Rocchelli family and Italian journalistic associations against the state of Ukraine, accusing it of war crimes against journalists. In the absence of hard evidence to prove Markiv's guilt, the prosecution relied heavily on a propaganda-tainted narrative about the war in Ukraine, the actions of the belligerent parties and Markiv personally. This narrative was also repeated by mainstream media in Italy.

In the absence of hard evidence to prove Markiv's guilt, the prosecution relied heavily on a propaganda-tainted narrative about the war in Ukraine, the actions of the belligerent parties and Markiv personally

The prosecution repeatedly quoted Russian propaganda sources, such as RT and Russian Spring, as reliable during the trial. Based on these materials (some of which were later established to be fake), it tried to present a distorted picture of war in Ukraine and discredit Ukrainian witnesses.

The prosecution repeatedly quoted Russian propaganda sources, such as RT and Russian Spring, as reliable during the trial

There were several key points which the prosecution and civil plaintiff lawyers asserted to prove the Ukraine's and Markiv's guilt. They completely or partially distorted the real situation and echoed Russian propaganda narrative. Here are some of them, based on the reading of case papers and the sentence motivations. 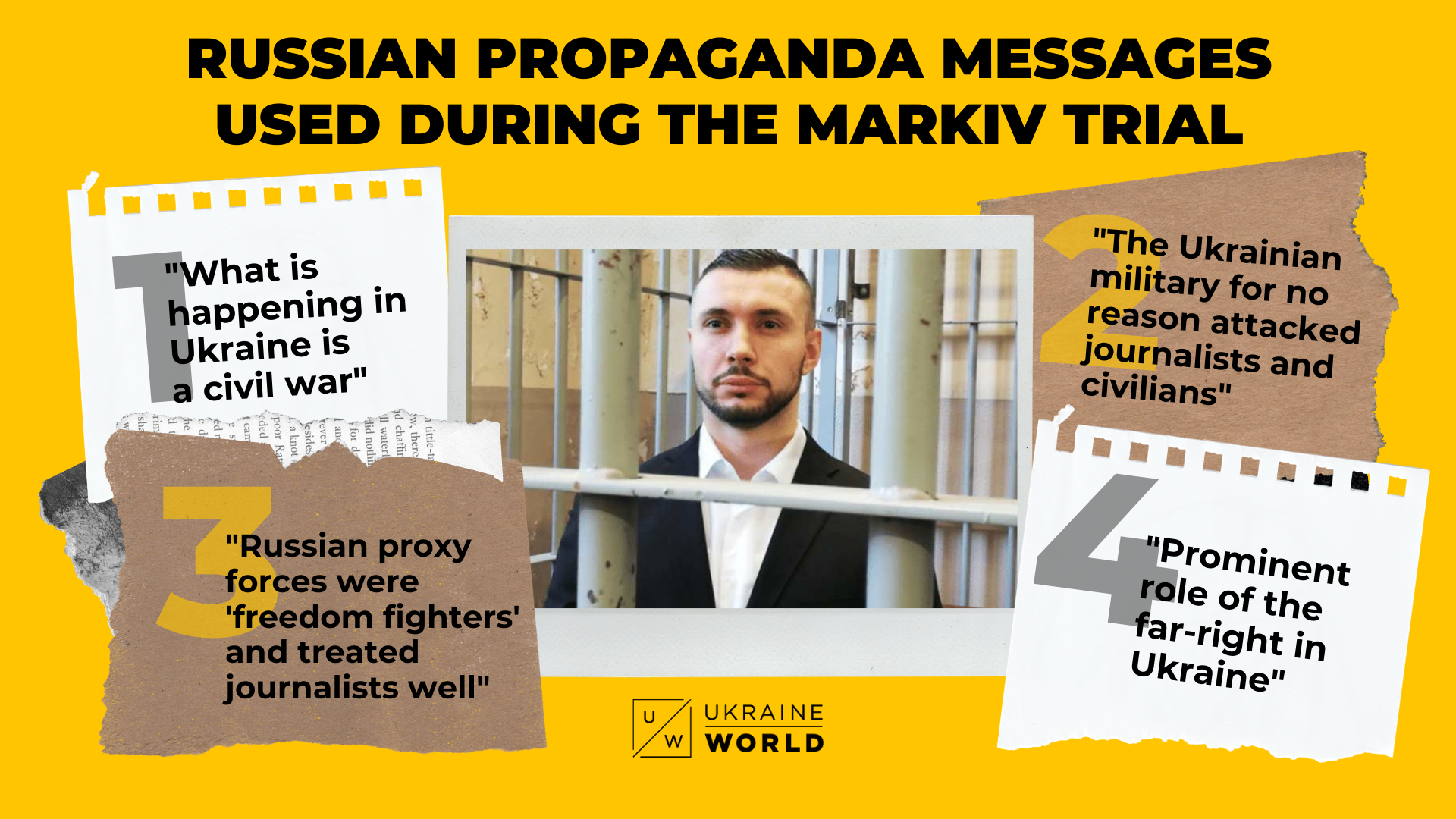 This is the fundamental Russian propaganda narrative, and it is aimed at distracting attention from Russian aggression against Ukraine. It has been well documented that Russia sent its special forces personnel to annex Crimea and to destabilize Donbas, and provided its proxies in Ukraine with soldiers, weapons and money. None of this was mentioned in the description of the situation in Ukraine during the Markiv trial. The jury accepted the argument that it was a grassroots uprising in Eastern Ukraine that Kyiv tried to crush resulting in 'civil war'. There was no mention of Russia's military aggression and that Ukraine was fully within its rights to defend itself, protect its sovereignty and territorial integrity. The Ukrainian military was effectively presumed to have conducted a 'punitive operation' against its own citizens, a popular Russian propaganda narrative.

There was also confusion over the status of Ukrainian army, National Guard and volunteer battalions, often defined in court as 'irregular', 'paramilitary' formations, and wrongly equated with Russian proxy forces in Donbas.

To back up accusations that the Ukrainian side committed war crimes and attacked journalists, the civilian plaintiffs quoted two documents: a Human Rights Watch letter to Ukraine's president-elect Poroshenko on June 6, 2014, and OSCE May 23, 2014 report on the media freedom in Ukraine. However, their content was distorted and manipulated in court. It was claimed that the Ukrainian side deliberately attacked civilians, quoting a case of a mortar shelling of a psychiatric hospital near Sloviansk. It was not mentioned that the hospital was occupied by separatists who had fired at Ukrainian forces from its premises in order to provoke a response. It was also wrongly said that attacks against journalists in Ukraine in 2014 were intensifying due to the actions of government-affiliated forces. This is the complete opposite of what the OSCE report said. In fact, the document attributes most attacks to Russian-backed forces.

This narrative was based on a testimony of French photographer William Roguelon. He said he had 'good relations' with Russian-backed fighters. However, Roguelon's testimony is inconsistent: he also said they pointed their guns at him and shot towards him when he was escaping.

It also contradicts the facts on the ground about the Sloviansk occupants' attitude to journalists. In late April 2014, American reporter Simon Ostrovsky was detained by the forces of separatist commander Igor Girkin and spent three days in a basement prison. Ukrainian journalists were imprisoned there for much longer periods. In spite of this, the court incredibly stated in its decision that Russian proxies in Sloviansk didn't have a reason to obstruct journalists because they wanted the world to know about their 'fight for freedom'. There was no mention of the crimes of Russian proxies in Sloviansk, such as mass extrajudicial executions of religious minorities, the murder and torture of pro-Ukrainian activists, and the firing of weapons from residential areas.

This claim was based partly on reports of the far-right links of the Azov Battalion (which had nothing to do with Ukraine's National Guard and Armed forces operating at Karachun hill), but also on the photos from Markiv's phone. In particular, there was one in which Ukrainian soldiers were pictured holding a flag with a swastika on it.

When asked about this photo in court, Markiv said he was not in the photo and did not take it. Rather, he said the picture was sent to him and the swastika flag was a trophy seized from the separatists. Markiv was also accused in court of having far-right affiliations because he used to attend a pub in Kyiv that had far-right paraphernalia as elements of décor. He said he didn't hold far-right views. Branding Markiv as a 'Nazi' was instrumental to creating his image of a merciless criminal. While there was no proof of his involvement in the death of Rocchelli, he was deemed guilty by means of his alleged association with the far-right.

Branding Markiv as a 'Nazi' was instrumental to creating his image of a merciless criminal. While there was no proof of his involvement in the death of Rocchelli, he was deemed guilty by means of his alleged association with the far-right.

As is clear from reading the sentencing document, the jury believed the prosecution's reconstruction of events -- not only those related to circumstances of Rocchelli's death, but also its propaganda-tainted representation of the situation in Ukraine in general.

Propaganda narrative in the Italian media covering the case

There was little coverage of the Markiv trial in mainstream Italian media. The major  newspapers and TV stations only attended one or two hearings. Their coverage was often one-sided and marred by disinformation.

Popular journalist Fabrizio Gatti covered the case for the left-leaning weekly Espresso. In his article, he described the Ukrainians in court - middle-aged workers from all over Italy who came to support Markiv - as his 'round-faced' and 'shaven-headed' nationalist fans: 'This public [...] is an instant picture of the European nationalism which we see flourishing everywhere today, even in the palaces of justice. It is what Andy [Rocchelli] started to document from the beginning of that first experiment of sovereignty, which from the Independence Square in Kyiv five years ago has led to the entry of the far-right into the Ukrainian parliament and, inevitably, to the war against Russia', concludes Gatti. In a vein resembling Russian propaganda, he puts a lot of emphasis on presumed far-right affiliations of the Ukrainian soldiers and Markiv himself, saying that 'National Guard consisted of volunteers, nationalists, and extremists'. The war in Ukraine, according to Gatti, is 'Russia's response to plans of NATO expansion'.

In a vein resembling Russian propaganda, he puts a lot of emphasis on presumed far-right affiliations of the Ukrainian soldiers and Markiv himself, saying that 'National Guard consisted of volunteers, nationalists, and extremists'. The war in Ukraine, according to Gatti, is 'Russia's response to plans of NATO expansion'

In an article for the print edition of Avvenire newspaper, another famous journalist Nello Scavo baselessly accused the Ukrainian diaspora in Italy of far-right affiliations. The newspaper didn't reply to letters from Ukrainian associations in Italy asking to retract those defamatory claims. In yet another article, Scavo described photos from Markiv's smartphone as proof of his alleged far-right views. The journalist simply repeated the prosecution's allegations without providing the position of the defence.

Propaganda played an important role in Markiv's trial in Italy both inside and outside the courtroom. Both the court proceedings and the general media discussion were overwhelmed with a distorted narrative about the origins of war in Ukraine, the vilification of the Ukrainian military, glorification of Russia's hybrid forces and ignorance of their crimes, and a strong emphasis on the presumed far-right views of Ukrainian soldiers, members of the Ukrainian community in Italy and Markiv personally. In the absence of any direct proof of Markiv's involvement in the death of Andrea Rocchelli, the discrediting of the state of Ukraine, its military and Markiv as their representative was instrumental in his conviction and 24-year sentence in his initial trial. Disinformation and propaganda continued during Markiv's appeal, however the Milan appeals court proved to be more immune to it.

Implementation of the EU-Ukraine Association Agreement is taking place right now. How it empowers ordinary Ukrainian citizens and what challenges and opportunities...
Russian Aggression
June 18, 2018

Estonians routinely pay their taxes and retrieve medical prescriptions online – but despite its reliance on the Internet for such sensitive electronic transactions,...