What is Russia’s "De-Satanization" Rhetoric About?

How Does Russia Deny the Existence of Ukraine?

October 22, 2022
Denying the existence of Ukraine as a nation and state is one of the key strategic narratives of Russian propaganda. 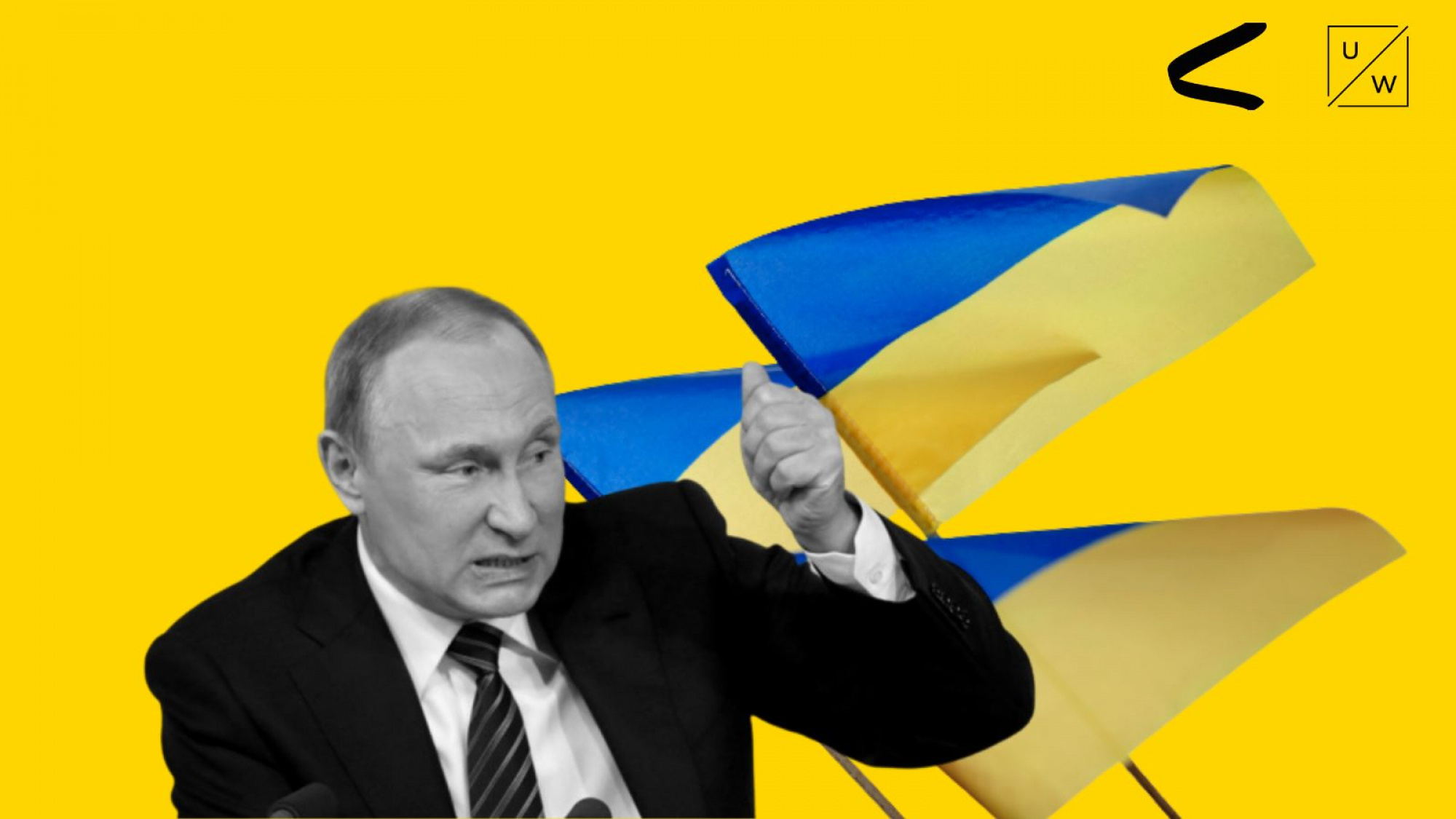 There is the world the way we know it. There are states on the political map, there are internationally recognized borders, numerous ethnicities within these borders and various languages. We take this for granted. However, it turns out that one state can deny the existence of another state with its people, language, history and culture as if it were all fake.

Denying the existence of Ukraine as a nation and state is one of the key strategic narratives of Russian propaganda, as well as one of the most dangerous ones. It is not only part of the basis upon which Russia built up the informational grounds for its full-scale invasion of Ukraine, but it fuels further hatred, violence, and atrocities by Russians. This narrative is used to justify the logic that if Ukraine appeared on the map accidentally, and Ukrainians objectively don't exist, then it is necessary to liberate them from this unviable concept of 'Ukraine-ness' by exterminating them.

This strategic narrative isn't new. It started circulating long before the full-scale invasion and even before the beginning of Russian aggression in 2014. Even back in 2009 Vladimir Putin, as the Prime Minister of Russia, claimed that relations between Big Russia and Malorossia (Little Russia)-Ukraine have always been exclusively Russian business.

What does this statement mean? Even though it didn't sound very aggressive at the time, it made clear that even 13 years ago, Russia's leader discounted Ukrainian identity and tied Ukraine's history to Russia's. It pressed forward the notion of 'Malorossiya' reconceptualized as a territory subordinate to Russia. Hence, the image of Ukrainians not as a people of a separate ethnicity, but an inferior 'Malorussians' settled in the Russian collective consciousness. This concept has become a mile marker in the further development of the narrative, becoming more aggressive and alienated from real history.

The Russian strategy to erase Ukraine as a state and Ukrainians as a nation from the information space and public perception includes three components, simply described as:

One of the essential components of the Russian strategy to deny the existence of Ukraine is the reinvention of its history to make Ukraine's existence look like a historical mistake. Russian propaganda presents Ukraine as an accident of history which doesn't have historical grounds for its statehood. Thus, Russian President Putin claimed that Ukraine was a result of a series of mistakes made by Soviet leaders.

Russia ignores the historical context Ukrainian identity was formed in (statehood tradition from Kyiv Rus to Cossack times, and its modern conceptualization and realization in the beginning of 20th century with the Ukrainian People's Republic), and thereby claims that the idea of Ukrainian statehood never existed in any organic capacity. According to them, before 1991 Ukraine "was a part of a common state with Russia," and it is only Russian history which traces back to the times of Kyiv Rus: "The Russian state existed, and it began from Kyiv Rus. It was there that the Russian people were baptized, and Kyiv became a center, having united the Russian principalities around itself." In this way, they are dragging Kyiv into the Russian historical and cultural space.

What, then, is to be done with facts that prove the existence of Ukrainian history? The strategy Russia has chosen is to reconceptualize this history by manipulating facts and dressing them with a layer of lies. A new story was thus invented in which after the partition of Poland, "the Western ends of the Russian world (Russkiy mir) fell under the Austrian crown." In order not to let the population of those territories (who, according to Russian propagandists, really ethnically Russian) gravitate towards Russia, the Austrians decided to invent an alternate identity: Ukrainian. This, they say, is how the idea to create Ukrainian history was born: "It is the answer to the question of how to make Ukrainians out of Russians - it's necessary to write the history of Ukraine for them."

Russian propaganda has paid special attention to one of the most monumental historical works of Ukrainian history, Mykhailo Hrushevsky's History of Ukraine-Rus' (1898). In Russia's distorted perception, Hrushevsky was paid by Austrians to make up the history of a whole nation: "[Hrushevsky] did this on the order of the Austro-Hungarians, who wanted to rid Galicia and Volhynia, which then belonged to them, of Russian influence. With help from the Austro-Hungarian government, he created these fairy tales for his main work "History of Ukraine-Rus'."

Russian propaganda further claims that Ukraine itself exists only because it was fabricated by Bolsheviks after 1917. As it states, "Before 1917 Ukraine didn't exist. The overthrow of the monarchy caused territorial redistributions in the Western part of Russia." Thus, they presented Ukraine's existence as a mere Bolshevik machination to counteract imperial nature of Russia by promoting so-called small nations: "Ukrainism at that time was born like a leftist movement, created by Bolsheviks to undermine, as they considered it to be, the Great Russian chauvinism." Ukrainians' fight against Soviet subjugation, the Red Terror, and the Holodomor are of course totally ignored. Just as Russia ignores  the question of why the Bolsheviks consolidated  the territories of modern Ukraine, as well as  what small nations the Bolsheviks were ostensibly trying to promote if, as Russia contends, the Ukrainian nation didn't exist.

Russians use the fact that Ukrainian territory was built from the lands of different empires as a proof of the absence of Ukraine's own history. However, this fact only proves that the Ukrainian people, located at the intersection of the East and West, had always had to struggle for its statehood. Thus, it is not the case that Ukraine doesn't have its own history because it lacked a long, uninterrupted statehood -- on the contrary, its history is its struggle for a statehood, which Russia has been constantly trying to steal.

Another element of Russia's strategic narrative is denying the existence of the Ukrainian language. In Russian propaganda, the Ukrainian language is presented as an inferior dialect of Russian language used by peasants in villages. As they state: "Yes, this literary language that is called Russian was indeed born in Kyiv. ＜...＞ And exactly this language is real for the inhabitants of the territory that was called Ukraine later on. Unlike this village dialect that they call Ukrainian." 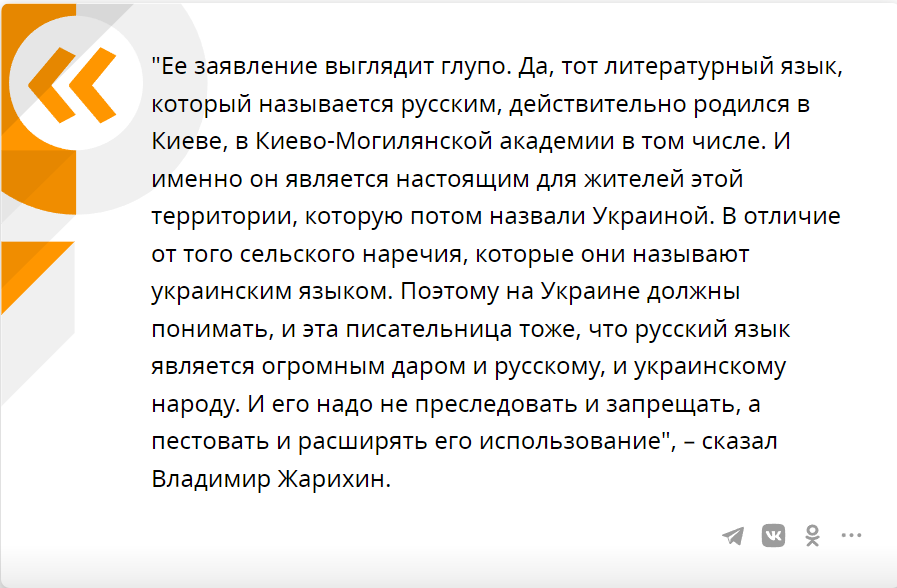 Russian propaganda further claims that the Ukrainian language was forcefully imposed on the territories of modern Ukraine by the Soviet authorities, and that "forceful Ukrainization caused sharp rejection among Malorussians." However, no one mentions that the Soviet authorities 'reformed' the  Ukrainian language by depriving it of authentic words and making it more similar to Russian. Moreover, under Soviet rule, teaching the Russian language was more prestigious than Ukrainian.

The last and the most dangerous step of Russia's information campaign to erase the Ukrainian nation is to deprive Ukrainians of their identity. This component is complex and aimed at not simply at humiliating and rejecting the Ukrainian national idea, but at directing  hatred towards Ukraine and its people. It is best summarized by  Vladimir Putin's words: "Ukraine, in fact, has never had a stable tradition of its true statehood" or "Ukraine has always been an integral part of Russia's history, culture and spiritual space." 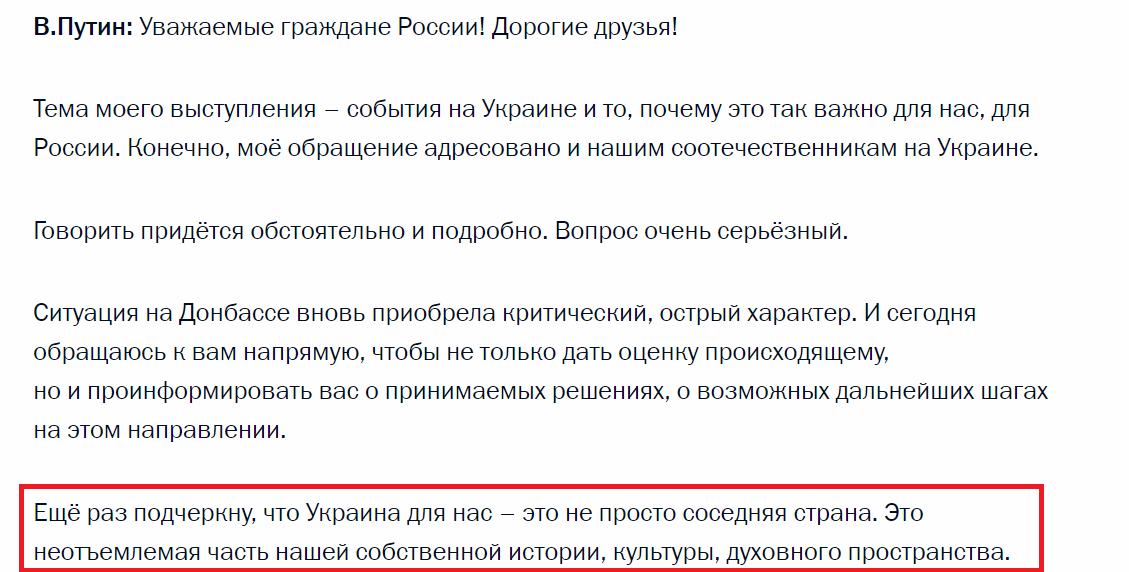 One Russian narrative here states that the Ukrainian identity isn't based on ethnicity, but is rather a political project: "For a long time, up to the 1920s, the  term 'Ukrainian' wasn't used as an ethnic one even by the adherents of Ukrainian nationalism. ＜...＞ It was used to characterize supporters of the 'Ukrainian party'." This narrative claims that the Ukrainian identity is based on Russophobia, and it labels the Ukrainian idea an artificial anti-Russia. Its main aim is to create the perception that Ukrainian identity cannot exist simply because there are no such people as Ukrainians, but rather only Russians with a distorted perception of themselves. Statements about Ukraine like "there is no single nation, no single state - only ethnic minorities, among which Russians are the most numerous" enhance this perception.

Another element of this narrative explains the existence of modern Ukraine as the project of the collective West: "The appearance of Ukraine after the collapse of the USSR is a mistake. It is  a political experiment based on  Western globalism. The main role here is played by the US and the EU."

In this context, Russian propaganda is even more aggressive and directly calls for genocide. Even public officials don't hesitate to make such statements as: "There is no Ukraine, however there is "Ukrainism" - a specific mental disorder" (Vladislav Surkov, Russian politician, former personal adviser of Vladimir Putin) or "What grew in the place of Ukraine is an existential threat to the Russian people, Russian history, Russian language, and Russian civilization" (Dmitry Rogozin, Former Deputy Prime Minister of Russia for Defense and Space Industry, former Director General of Roscosmos). 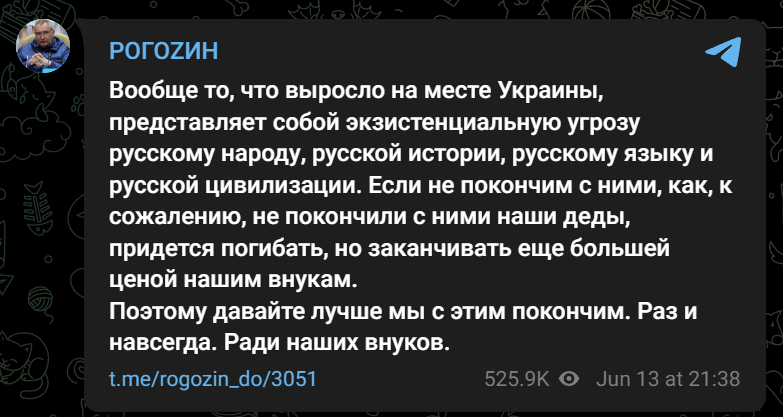 All three components seek to create an image of Ukraine as an accidental state in the eyes of Russian audiences. This intricate mixture of the manipulation of history, open lies, and hate speech turns this strategic narrative into a basis for the Russian desire to 'correct' this historical 'mistake.' The denial of a nation's existence is among the practices that constitute a direct and public incitement to commit genocide. Such propaganda is even more dangerous since having proved its effectiveness, it can be used not only against Ukraine, but spread further to other states Russia is interested in subjugating.