February 11, 2022
Since 2014, Ukraine has been consistently pursuing EU and NATO membership – and public support for joining both organizations has reached unprecedented highs

Let's dive into some figures right away.

Since the outbreak of war in 2014, popular support for Ukrainian membership in NATO has boomed.

Whereas in 2012 only 14% of Ukrainians favored the idea, in just two years' time, that number soared to 37%. It kept growing steadily, even though at a somewhat slower pace, in the following years, as well, eventually reaching 54% in 2021. That's an almost fourfold increase in less than ten years. It also is a higher level of support than the one Ukrainians showed for EU integration back in pre-revolution 2013 (49%). 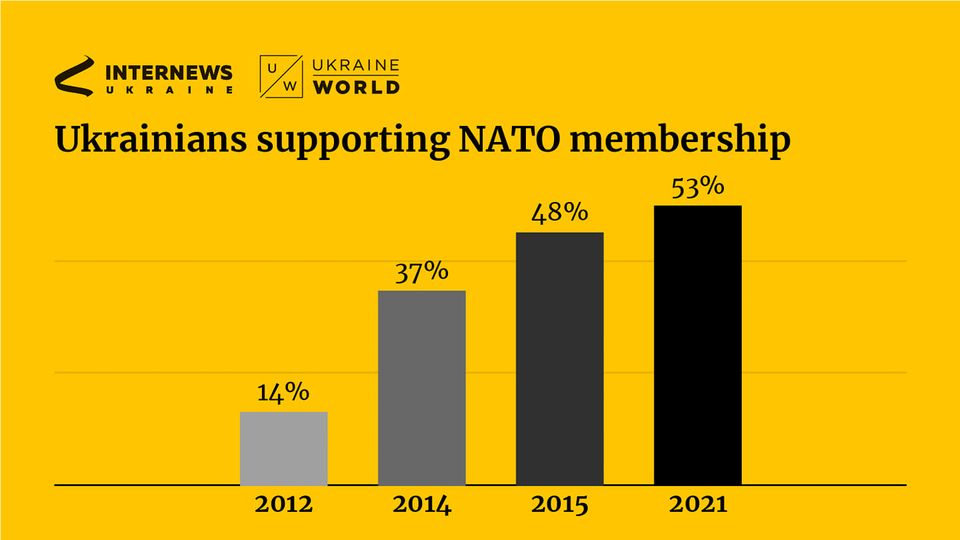 As much as these figures tell us, it is useful to give them further context. This includes a closer look at how sentiments about Ukraine's membership in NATO have evolved among different age groups and regions of Ukraine. It is no secret that the country's east and south have consistently been far less enthusiastic about Ukraine's accession to the bloc. The 2021 data has become no exception — with the average national support totaling at 54%, only 38,2% of residents in Ukraine's south and 33,2% of those in the country's east favor the idea. However, the data becomes more interesting after we break down the responses by age group. Whereas the older generation largely remains in opposition to NATO accession (which presumably stems from USSR-related nostalgia and higher susceptibility to Russian rhetoric), respondents aged 18-29 support Ukraine's joining of NATO movement almost at the national average level — 49%. 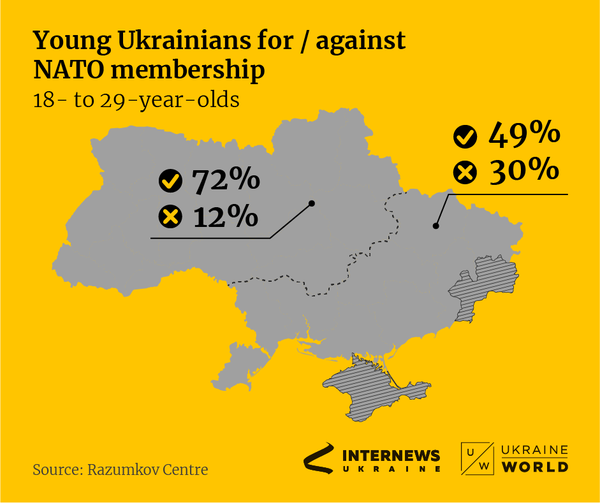 This particular figure shows that younger generations, who have spent the entirety of their lives in independent Ukraine and whose information consumption habits leave them less vulnerable to Russian propaganda, have a much more sober vision of things. There is every reason to expect that this generation will come to predominate as it grows older, thus marginalizing the Soviet-minded part of the society.

As a result, given some time, Ukraine's South and East will eventually come to match the rest of the country when it comes to opinions on NATO membership.

Another element worth paying attention to is the magnitude with which sentiments have evolved on a national level. Support of Ukrainian NATO membership among the country's citizens has grown significantly quicker than that of Ukraine's accession to the EU.  Since pre-revolutionary 2013, support for EU membership has grown by 13% and now totals at 62%, which is a bit more than one-quarter increase. Support for NATO membership, on the other hand, has grown by four times within the same time frame. Now, in terms of absolute figures, Ukrainians are still somewhat more ready to join the EU than NATO, but these dynamics suggest that the picture will inevitably continue evolving. 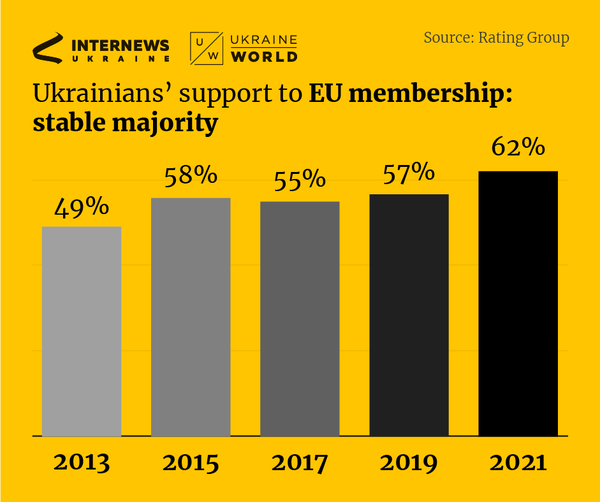 This last observation hints that Ukraine's movement towards NATO has at this point become irreversible.

Looking back to 2013,  49% of citizens wanted Ukraine to integrate with Europe. When the country's then-authorities abruptly canceled the signing of an EU Association Agreement, people took to the streets. The Revolution of Dignity followed. Now, the support of Ukraine's membership in NATO is currently five points higher than the 2013 EU figure, and Russian troops are amassed in unprecedented numbers on Ukraine's borders. Abandonment of the NATO vector by Ukrainian leadership would now be both an irrational security strategy and political suicide.  After all, this is no longer a mere foreign policy choice, but a matter of Ukraine's continued existence.

Ultimately, this information is not simply a matter of illustrative figures and trends, but also a demonstration of Russia's hypocrisy in the ongoing talks on the architecture of European security. Russia demands that forces be withdrawn back to where they were in 1997 and Ukraine be perpetually blocked from becoming a member state.

However, the very reason why Ukraine wants to become that member state and thereby bring a  NATO border to Russia's immediate neighbourhood is the Kremlin's aggression.

As the infographic shows, if there had been no Russian aggression in 2014, public support of Ukraine's membership in NATO would have had every chance to remain marginal.

Before 2014, both Ukraine's policies and public sentiments with regard to NATO differed dramatically from one presidency to the next. Russia's aggression, however, was a turning point that finally brought the pendulum motion to a stop. The fact that both post-2014 administrations, otherwise known for their fierce political rivalry, have been equally committed to the pursuit of NATO ambitions, testifies that Ukraine's movement towards the bloc is about security, rather than about politics, as Russia tries to argue. In this context, public sentiments supporting that line are crucial. For one thing, they demonstrate that increasingly more Ukrainians have come to an understanding of who their country's true allies and enemies are, thus bringing a traditionally divided country closer together. Moreover, wide public support makes the West take Ukraine's NATO-related ambitions more seriously.  In moments like this, when 140 000 Russian troops are ready to cross Ukraine's border, this is a particularly necessary and powerful message.

July 16 marks 30 years since Ukraine adopted the Declaration of State Sovereignty. In our new video, Volodymyr Yermolenko explains how this document was adopted...
Belarus
November 26, 2021

Read a new issue of a bi-weekly newsletter with monitoring of Russian activities and influence in Belarus to know more.