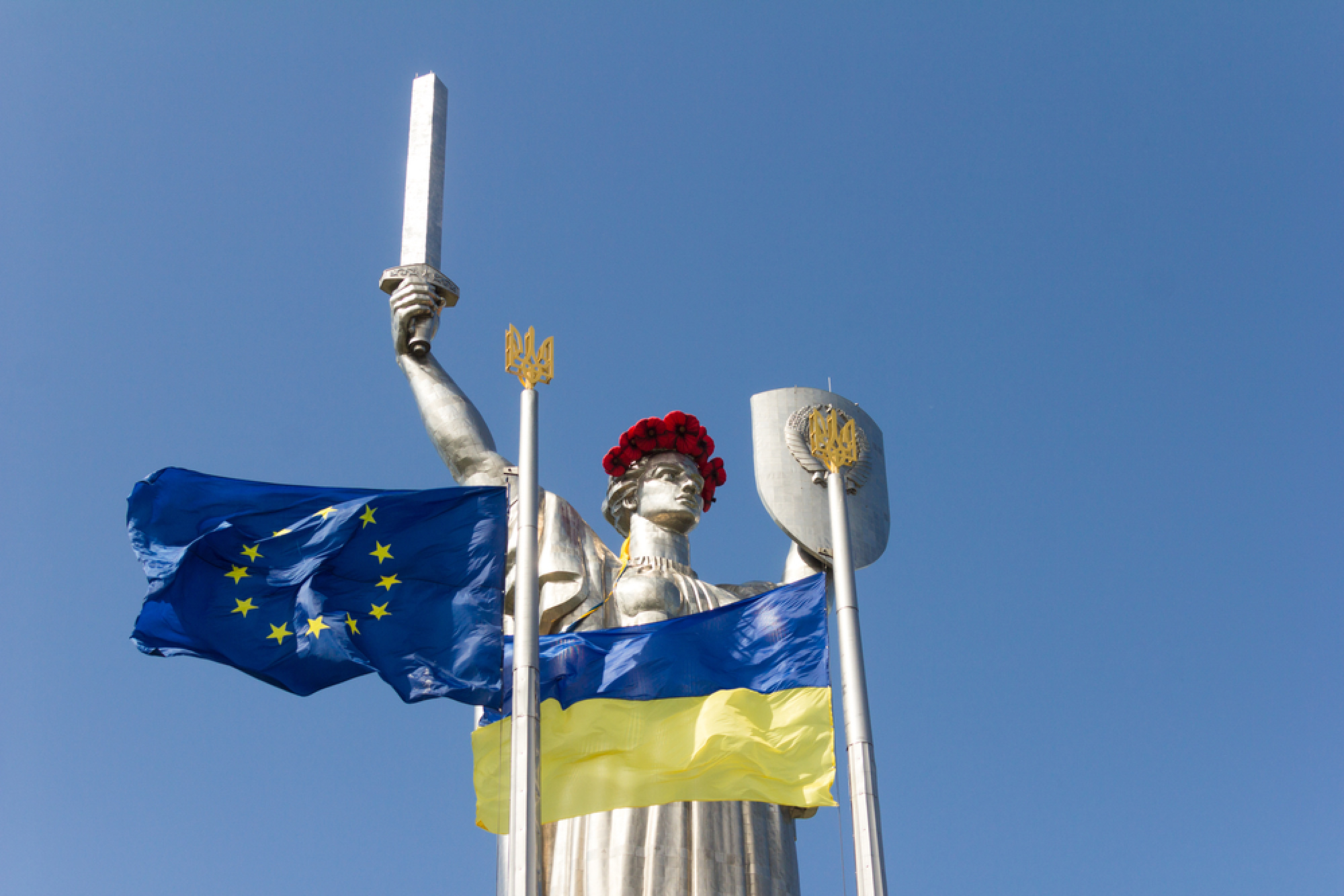 Although Ukraine still remains beyond EU doors, there is one thing that unites this Eastern European country with the European Union. It is a word “dignity”. Dignity is a key word for EU values: it comes first in the enumeration of values on which the European Union is founded, as described in Article 2 of the Treaty on European Union. Dignity is also a key word for Ukraine’s recent history: uprising of 2013-2014 against the corrupt regime of Victor Yanukovych, is called either the “Euromaidan” or “The Revolution of Dignity”.

In the Ukrainian Euromaidan context, the concept of "The Revolution of Dignity" appeared at the early stages of the protests. It originated from the milieux of the nationalist Svoboda party, in December 2013. But the very fact that authors of this concept decided to suggest "Revolution of Dignity", instead of the initial concept of "National Revolution", shows their understanding that Euromaidan had in itself something much broader, than simply patriotic values. The Ukrainian Euromaidan was ideologically polymorphic: it was a mixture of liberal, patriotic and even leftist ideas and practices. Its reasoning was mostly liberal, focused on universal values; its emotions were mostly patriotic; its "body" was mostly leftist as it implied sharing of goods, meals, shelter, and a highly cooperative spirit. All these things were intuitively united under the umbrella of the world "dignity", hidnist, with its intuitive sense as the right to be protected from humiliation and violence. Humiliation - of a human being, of the nation, of a community - was perhaps a key negative feeling that protesters were fighting against; and dignity was the word which united them.

This word is more than a pathetic slogan: it is a cornerstone idea of the European civilization. The fact that it appears in the EU treaty as the first value, without much of an explanation, might also testify its all-encompassing nature, designating the humanity of humans and their inalienable rights. But this concept is not as simple as it seems.

Dignity, dignitas, was born in Ancient Rome as an aristocratic concept praising a person’s achievement. Dignitas was a result of an individual victory, of accomplishment, of glory and pride. It designates something inalienable: once you achieve it, you can never lose it.

The subsequent history of the European political project is a story of gradual widening of the application of dignitas to new groups and societies. European modernity can be seen as a story how the concept has been becoming more inclusive: its application was enlarged from aristocracy to bourgeoisie, from bourgeoisie to working class, from men to women, from colonizing to the colonized nations, etc. The story of enlarging the concept of dignitas is still continuing and will probably never end. Its “ideal type” is an idea that every person has dignitas.

The modern era in Europe thus provided a basis for the universal idea of dignity, expressed in an idea of natural rights. This concept implied that dignitas comes from nature, and not from somebody’s achievement, not even from God’s will to save us or condemn us. Dignitas belongs to us all, regardless of our story, our background, our destiny. It is our starting point, not a destination.

In a way, today’s concept of dignity moved away from its Ancient Roman precursor. In the Roman concept, dignitas was a result of an accomplishment; the modern concept sees dignitas as a starting point of any human life.

But if we look closer at it, we will notice that the current idea of dignity is a combination of two sets of values: the ancient and the modern. It is a synthesis of the ancient warrior ethos and modern bourgeois ethos.

The warrior ethos was a foundation of the Ancient world. Greek and Roman values were built upon an idea that a true citizen should seek risk and glory on a battlefield. Dissidents, like Socrates, who urged people to think, rather than fight, were severely punished even in democratic Athens. The warrior ethos is built upon the concepts of battle, risk, victory and glory. It implies a zero-sum game: you win or you lose. It implies risk-seeking: to get glory and dignitas, one should be exceptionally brave on a battlefield.

Bourgeois ethos was born in a modern era as a great opposition to the ancient warrior values. It is built on the concepts of security and exchange. Contrary to the warrior ethos, it implies a positive-sum game: when two actors interact, both should win. It also implies risk reduction: to make a transaction viable, one should be safe from risk. It therefore implied an idea of natural rights: every person can be a partner in an exchange, every person therefore is born with dignity.

Bourgeois ethos and warrior ethos were in a constant confrontation throughout the centuries. It is remarkable how Thomas Hobbes’ Leviathan, a foundation of the modern political philosophy, provided an opposition to the warrior ethos and stressed the ideas of security as a key foundation of the modern state. But it is also remarkable how the warrior ethos has been re-emerging time and again as an opposition to the “petit-bourgeois” fear of risk: during the religious wars, Napoleonic wars, national revolutions, during the 20th century’s world wars, etc.

At first sight it seems that the current European concept of dignity is radically opposed to the warrior ethos. In the second half of the 20th century European values were much more focused on the ideals of peace, security and welfare, rather than ideals of war, fight and glory. However, it would be wrong to think that dignitas comes from the “bourgeois ethos” alone. My argument is that it also has a remarkable part of the old warrior ethos – and this part should not be neglected.

Bourgeois ethos puts too much emphasis on the exchange. Values, however, and dignity as their cornerstone, are born from an idea that somethings can never be exchanged. Values are something you cherish so much that you will never sell or abandon them. I phrase it in Ukrainian: tsinnosti ne mayut’ tsiny: values do not have a price, values do not have a sale value. This means that in any exchange there is something that always stays inalienable; something a person cannot be deprived of: his or her dignity.

Dignitas, as a concept coming from the aristocratic values, from the warrior ethos, thus enriches the bourgeois ethos of exchange with a new dimension of inalienability. If bourgeois ethos were applied in its purity today, we would have a world where human trafficking would be tolerated and where human lives would be openly traded on a market. Of course, these horrible practices exist but our values decisively condemn them – just because aristocratic concept of dignity is injected into the bourgeois idea of exchange.

The current axiological conflict between Europe, Ukraine and Russia is a tension that can be read through these lenses. Europe says its major value is human dignity; Russia says its major value is national glory. In Russian current axiological matrix, individuals can be sacrificed for the sake of the national glory; in the European matrix this sacrifice is unthinkable.

Between these two sets of values Ukraine finds itself in a very paradoxical place. It knows that both bourgeois ethos and the warrior ethos are key for its survival and development. It is remarkable how, in our post-modern world, the word “warrior” (voin) has returned to the Ukrainian discourse. Understandably so: we have hundreds of thousands of warriors, voiny, who are defending Ukrainian land from the Kremlin aggression, and dozens of thousands who have died in this battle, or lost their health, or their beloved ones.

Today’s Russia also wants to return to a warrior ethos, considering European values decadent, “too liberal” and too bourgeois. However, Russia fails in this endeavor. In seeking a new warrior ethos it actually re-invents Europe’s old “social Darwinism”, i.e. idea that people and states are animals fighting for survival. In seeking a warrior ethos Russia actually falls below a warrior ethos, to a kind of a “zoo-ethos”. I once called Russian current geopolitics a zoopolitics: it is not seeking bourgeois ethos of “positive sum game”, it is not even seeking a warrior ethos of “zero-sum game”; it is seeking a zoo-political “negative– sum game”: an ethos of haunting and wounding. In this ethos, every side of the interaction may lose, but the goal is to lose less than your opponent. Like an animal in a fight for a territory.

While trying to mask its zoopolitical ethos with a more dignified warrior ethos, today’s Russia is making the cult of the “Great Patriotic War” and the “Immortal Regiment”. It needs a simulacrum of a warrior ethos to oppose it to the West’s bourgeois ethos. But it can’t have it: its citizens are too much bourgeois than the Russian leaders want them to be.

The major Ukrainians’ reproach to Europe, however, is that EU has too little of the warrior ethos needed to confront the aggressor. Many Ukrainians tend to think that Europe is not brave enough to oppose to Russian aggression, and it is too bourgeois (seeking a compromise, an exchange) in its relations with the Kremlin.

Avoiding a difficult discussion whether this Ukrainian reproach is just or not, let me stress one important thing. Ukraine (as earlier Georgia or Moldova – also victims of Russian aggression) is a unique case for Europe precisely because it combines, in its collective psychology, warrior ethos and bourgeois ethos: the spirit of Achilles and the spirit of Thomas Hobbes. It seeks a European “normal” life of respect and security, but it understands that it needs to fight to get it, and to face danger – and seek glory – in this fight. Ukraine, therefore, is a country where the very concept of dignity is re-inventing itself, - or, rather, returning to its sources.

Ukraine seeks a European “normal” life of respect and security, but it understands that it needs to fight to get it, and to face danger – and seek glory – in this fight. Ukraine, therefore, is a country where the very concept of dignity is re-inventing itself, - or, rather, returning to its sources.

I no longer think this divide between different societies is valid. It would be naïve to think that some countries are more advanced than the others in “believing” in the European idea. Ukrainians are certainly not better in this respect than any other European nation.

But I do believe that Ukrainian story since 2013 shows that Europe is not full without the Ukrainian experience. Precisely because the idea of dignity, a cornerstone of European civilization, is unthinkable only in the frameworks of a bourgeois ethos of exchange. Dignity returns to culture when it is facing an existential danger: understanding that something crucial can be destroyed.With the corona crisis, and the rise of aggressive populism and for some a new romantization of violence, we all entered a new epoch when danger is experienced, not only imagined. In Ukraine, we maybe knew this a bit earlier.

It is important that we go beyond thinking of Europe as only an institutional project or a trade zone. And re-start thinking of it as an axiological idea. It is important that we think of Europe not only as the EU institutions but also as a broader European Confederation based on values of dignity, as Michael Emerson suggests. Europe is an idea about reducing the space for violence and extending the space for dignity. When violence, tragedy and death come back to you again, you understand this especially well.

This material was first published here.

Education During The Pandemic In Ukraine: How Schools Adjust To The New Realities

Ukrainian folk music is getting more and more world attention and recognition. It is multidimensional, so we’d like to tell you all about it!
PODCAST
February 20, 2019