August 15, 2019
This year’s early parliamentary elections have marked one of the biggest reboots in the history of Ukraine’s parliamentarism since the country gained its independence in 1991. 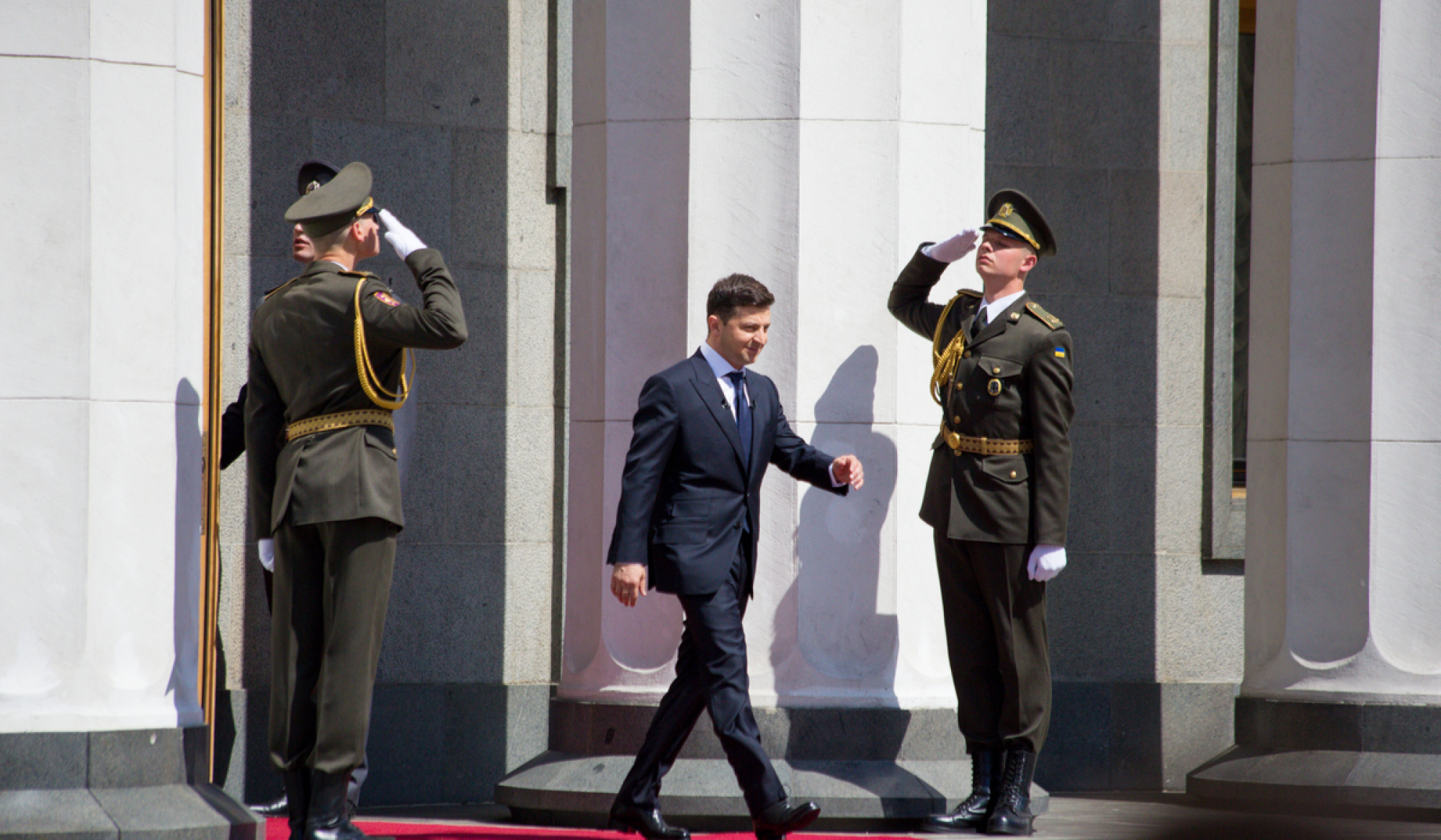 Almost 77% of all newly-elected members of Parliament have never been elected to the Verkhovna Rada before (326 people out of a total of 450). In this regard, the tremendous win by Volodymyr Zelensky, a well-known comedian, at the Ukrainian presidential elections earlier this year has paved the way for numerous journalists, sportsmen, showbiz representatives and culture professionals, with absolutely no experience of political activities, to take a seat in the new Verkhovna Rada. 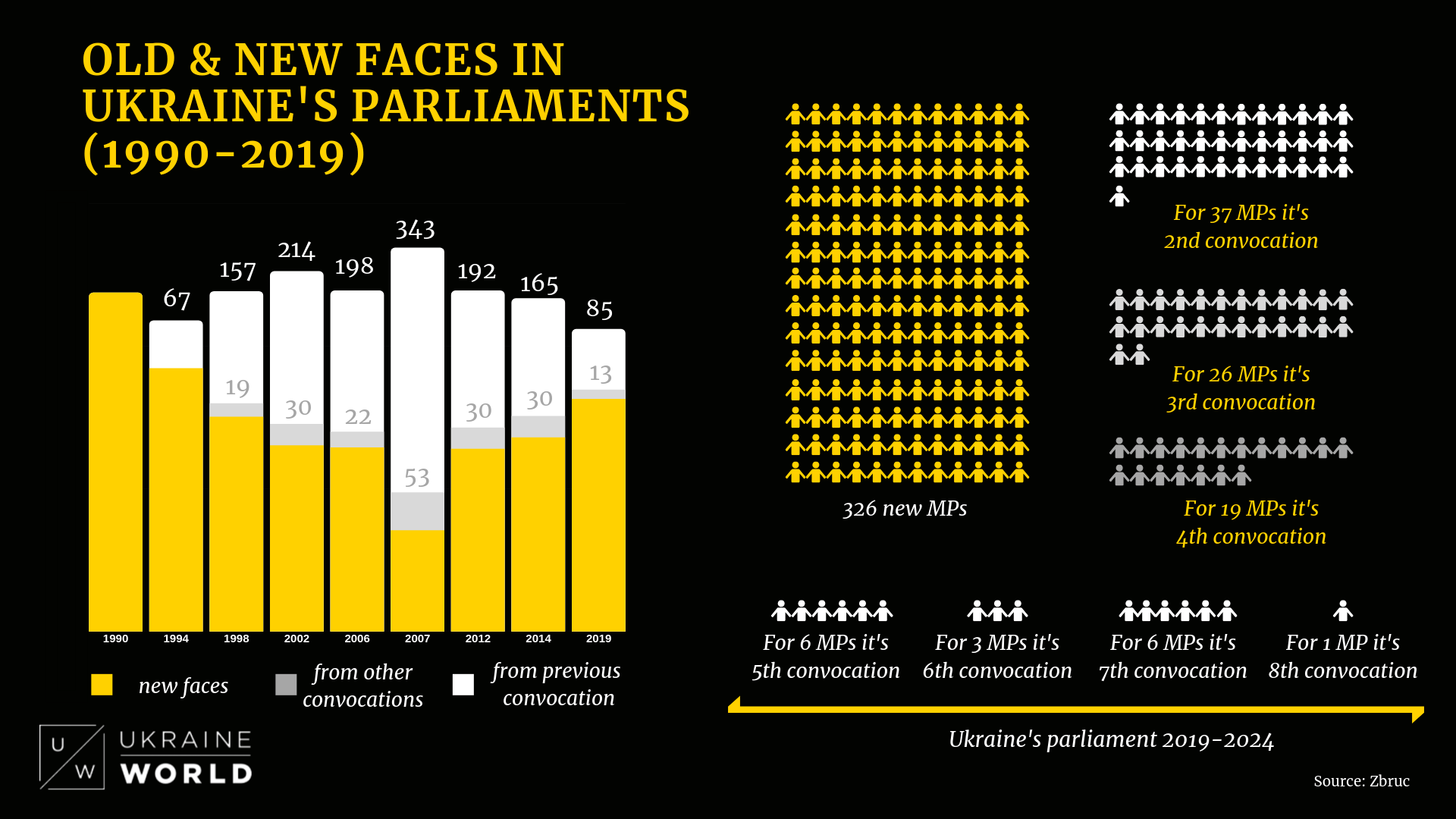 Servant of the People leads the way

The biggest share of Rada newcomers is made up of those who represent the Zelensky-inspired Servant of the People political party, which set a record by winning a majority in the Verkhovna Rada for the first time in Ukraine's history. More specifically, none of 254 MPs from the Servant of the People party have ever been to the Rada before. Moreover, the presidential future faction will also represent a great mix of journalists, sportsmen, showbiz representatives with no experience in politics. Other parties will also have a representation which is somehow connected to the non-political world, though not as big as the presidential faction has.

And the winners are...

Three sportsmen, both from Servant of the People, will step into their MPs' shoes in the new convocation of the Verkhovna Rada. Zhan Beleniuk, a Greco-Roman style wrestler and silver medal winner at the 2016 Summer Olympics in Rio de Janeiro, pledges to use his mandate to "fight corruption and bribetakers in the sphere of physical training and sports in Ukraine."

Olha Saladukha, a Ukrainian triple jumper and bronze medal winner at the 2012 Olympic Games in London, was 58th on the party list of Servant of the People, while Artem Dmytruk, Ukrainian powerlifting champion, edged out his opponents to win first place in one of Odesa city's single-mandate constituencies.

Rock music singer Svyatoslav Vakarchuk is one of the most prominent examples among other stars that will "shine", as of now, under the dome of the newly-elected Verkhovna Rada. A Ukrainian singer and leader of the Okean Elzy music band, he will try to resume his active political carrier with the newly-established Holos (Voice) political force. In the mid-2000s, in the aftermath of the Orange Revolution, Vakarchuk served as an MP for some time, but then unexpectedly, stepped down. Explaining the decision to voluntarily give up his parliamentary mandate, Vakarchuk railed against the state's political life, which, according to the singer, "had boiled down to a  ruthless fight for power" which sacrifices "not only moral principles, but also national interests."

However, the bulk of celebrities was garnered by the Servant of the People party. The highest-profile are the following: Oleksandr Skichko, an entertainer, TV presenter and parodist; Roman Hryshchuk, a TV star and stand-up comedian; Mykola Tyshchenko, a restaurant-keeper and TV presenter; Geo Leros, culture professional and film director, Andriy Bobliakh, a stand-up comedian and wedding master of ceremonies, etc.

The "migration" of representatives of Kvartal 95, Zelensky's comedy studio, will also take place to the new Verkhovna Rada. One of the most well-known parliamentary newbies and Kvartal 95 actor is Yuriy Koriavchenkov (also known as Yuzik), who was elected at one of Kryviy Rih city's single-mandate constituencies. Commenting on his total lack of political activism in the past, Koriavchenkov said it is not a problem, since such experience will be gained during work as an MP. Other Kvartal 95 or comedy studio-related representatives consist primarily of managerial staff, including Maksym Tkachenko, Kvartal-Concert company director general, Olena Khomenko, who is in charge of development digital products and t Kvartal 95, Oleksandr Kabanov, a scriptwriter for the comedy studio.

A great number of journalists will also work as future MPs and represent the Servant of the People faction. The majority of these journalists are representatives of 1+1, a TV channel owned by oligarch Ihor Kolomoyskiy, which actively supported Volodymyr Zelensky during his presidential campaign. The most high-profile of this group are Oleksandr Dubinskiy, a presenter of the Hroshi (Money) TV program on 1+1 channel, Serhiy Shvets, a 1+1 journalist and Oleksandr Tkachenko, 1+1 media director general. When he was elected as an MP, Tkachenko even said that he does not rule out that he could succeed Vitaliy Klitshchko as the new head of Kyiv City State Administration.

Moreover, Dmytro Kostiuk, a journalist at the Espreso TV channel, Olena Moshenets, editorial director of the ekonomika+ media outlet, Daryna Volodina, a radio host, will, among others, also represent Servant of the People in the Ukrainian Parliament.

Serhiy Rakhmanin, deputy chief editor of Dzerkalo Tyzhnia weekly newspaper, became a member of the Verkhovna Rada thanks to the Vakarchuk-led Holos party.

However, against the backdrop of one of the biggest parliamentary reboots in Ukraine's history, this is the first time that so many people with no political background connected to work in Parliament have entered the Verkhovna Rada of a new convocation. There was only one case, in 1994, when Parliament gathered almost 85% of "new faces" if compared to the elections in 1990; however, it is rather the exception, as the Rada elections in 1994 were held for the first time since the Declaration of Independence of Ukraine in 1991.

The early parliamentary elections in 2019 mark the "migration" of new faces - journalists, sportsmen, showbiz representatives, including those from the Zelensky-created Kvartal 95 comedy studio, -- to politics, especially in the light of the win of former comedian Volodymyr Zelensky at the presidential elections earlier this year. Before the current campaign, such a trend was not so obvious, and its scale was not so massive either. Many political neophytes managed to beat well-experienced "political dinosaurs" when running in single-mandate constituencies.

However, the overall composition of the future Ukrainian Parliament will not be limited to the above-mentioned people. There will be plenty of activists, entrepreneurs and other professionals. UkraineWorld will take a deeper look at people working in other fields in future stories.

This one-party majority and plentitude of power makes President Zelensky fully responsible for future transformations in the country. However, the question is whether this "catch-all soup" will manage to make the difference for Ukraine.

This article was prepared with financial support from the International Renaissance Foundation.

After the sanctions imposed on Medvedchuk’s TV channels, his team created First Independent TV channel. It claims to be independent but spreads the same pro-Russian...
PODCAST
January 20, 2022