What Has Gone Wrong With Pope Francis’s Policy on Ukraine, and How He Can Fix It

August 23, 2022
Over five months of Russia’s brutal war, Pope Francis has repeatedly called for peace in Ukraine. But his statements have only ignited public outrage and misunderstanding among the Ukrainian people. 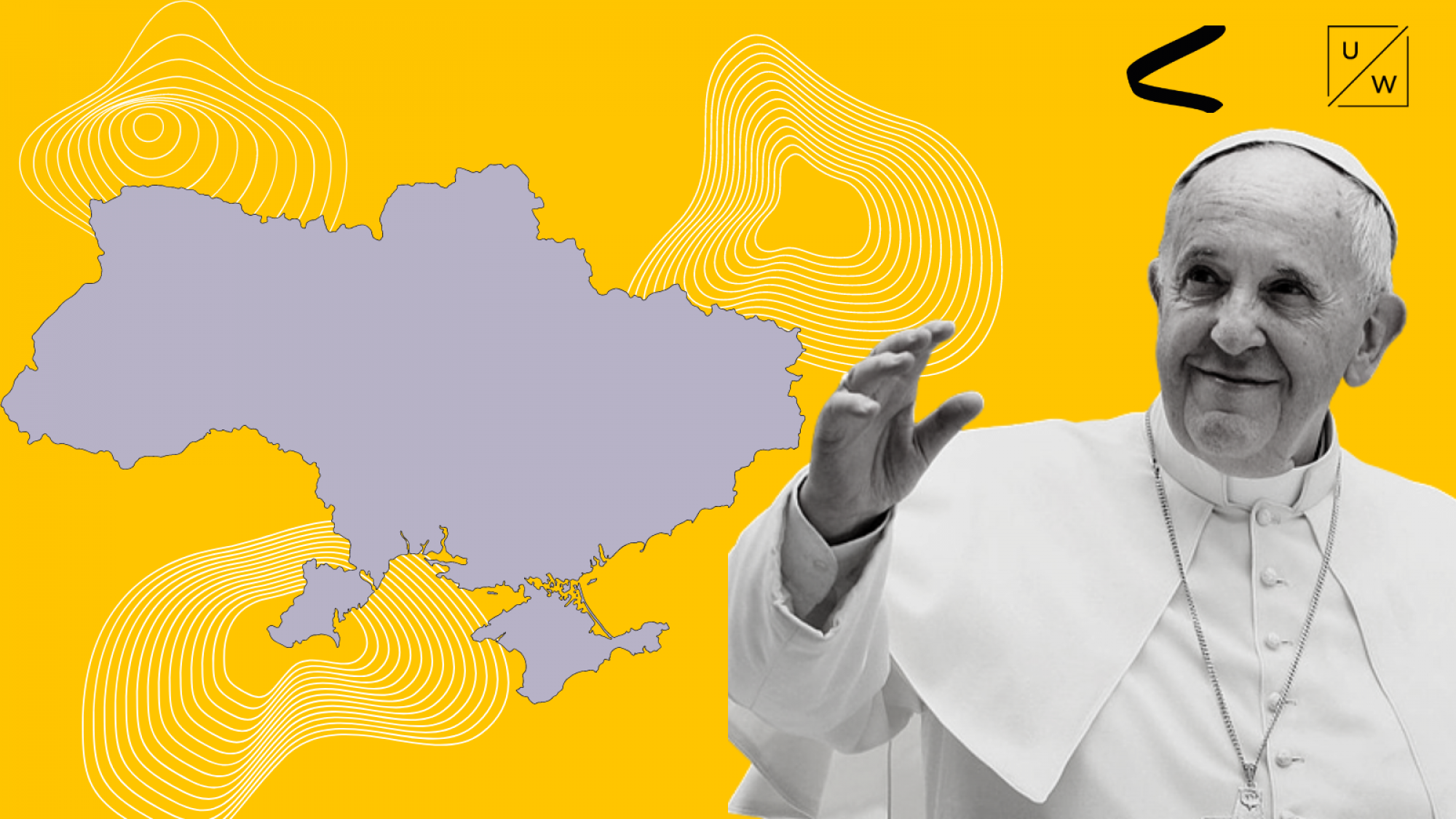 Fighting for their country against Russia, Ukrainians believe it’s time for the Vatican to revise its relations with Moscow and do more to help.

During his visit to Canada, Pope Francis reiterated his willingness to visit Ukraine after months of searching “for the right time” to do so. Whether this happens or not depends on what the pontiff means by the “right time,” explains church historian Dr. Anatoliy Babynskiy.

There have been plenty of right times for the Pope to visit from the perspective Ukrainians begging for international support and solidarity against a genocidal war endorsed by Pope Francis’s counterpart in Moscow, Patriarch Kiril. However, despite the Pope’s continuous words of compassion and calls for peace, Ukrainians have not seen what would be a just reaction — a condemnation of Russia’s war against Ukraine and assignment of responsibility to the Russian aggressor. The Pope’s trip to Canada, which has the world’s second largest Ukrainian diaspora, once again made clear that Ukrainians and their descents still expect the Vatican to “take a more clear and unequivocal position in support of Ukraine.”

By naively calling for dialogue with Moscow, (which has not worked), the Pope has only added to Ukrainians’ indignation with his messages that have avoided naming Russia an invader and have even voiced Kremlin narratives (such as blaming NATO for “barking at Russia’s door,” or calling the Russian invasion “a drama of Cain and Abel,” referring to Moscow’s imperial myth of “the brotherly nations”). Eventually, despite Pope Francis’s sincere motives, his mediation attempts have not worked. Back in June, according to Dr. Babynskiy, it seemed more clear that Francis “underst[ood] that Putin will not sit down at the negotiating table but will fight to the last Russian.”

Dr. Babynskiy argues that one of the reasons why Francis has missed the mark in his reaction to the Russian invasion of Ukraine lies in his misunderstanding of the nature of this war, as well as the situation in Europe. For the pontiff, as a person from Latin America, “all this is too far away,” he adds. Another reason, Babynskiy says, is that the Vatican adheres to the principle of positive neutrality, or impartiality, whereby they refuse to take sides in any conflict, which “causes a lot of debate.”

The misguided attempt to reconcile Ukrainians and Russians in the Way of the Cross, at the same time that the Russian military was committing horrific war crimes, caused an international scandal and undermined Ukrainian trust in the Vatican. The head of the Ukrainian Greek Catholic Church, Sviatoslav Shevchuk, called the Pope’s reconciliation efforts “premature” and even “offensive,” as justice hasn’t been restored. He said that Ukrainian Catholics and Rome share a desire for peace, but angry replies from Ukrainians can be found almost under each of the pontiff’s tweets on the war.

“I would not say that the Vatican does not support Ukraine. But approaches of the Vatican are not always read correctly here, in Ukraine,” Dr. Babynskiy explains. “If you do not know the historical context, it is very offensive for Ukrainians. "If we are the victim, then who is the aggressor?" he adds.

The issue gets even more complex if we look at the political side of Russia’s relations with Italy, and the Vatican, in particular. For decades, or even centuries, Moscow has worked systematically to establish good relations with the Apostolic Capital “because they understood that it is a serious player on the international arena, not only in the ecclesiastical sphere, but also in the cultural, political, and other sphere,” Babynskiy explains. “Many people look at this part of the world as something where Russia dominates, as if it has a natural right to dominate. It is very difficult to break these stereotypes, and many representatives in the Roman Curia think that Ukraine and Russia are brotherly peoples…and, therefore, the war looks like a family conflict that just needs to be talked about and a compromise found somewhere in the middle,” he argues. This old “charm of Moscow” persists in Italy to this day.

Father Andriy Shestak, a priest of the Ukrainian Greek Catholic Church, saw the influence of the “Russian world” in Italy with his own eyes. In 2016-2018, he studied in Rome, where the Russian Orthodox Church has invested in education and religious institutions, such as the Collegium Russicum, a Catholic college “dedicated to the studies of the culture and spirituality of Russia” that is funded by Rome. Each year, they welcome 10 priests from the Russian Orthodox Church to study at the pontifical universities. “Rome is always trying to build warm relationships with the Russian Orthodox Church, but at the end it looks like a one-way street.”

When we talked at the end of May, Fr. Shestak was, like many others, unsurprised by the Pope’s statements. Dressed in a green vyshyvanka, a traditional Ukrainian embroidered shirt, Fr. Andriy met us on the campus of the Ukrainian Catholic University in Lviv, where he leads the UCU’s school of journalism and communications. He told us that the Catholic Church could be doing more for Ukraine, but he was not getting his hopes up.

Regardless of the Vatican’s position, the Ukrainian Greek Catholic community has again taken up its historic role of helping Ukraine withstand and survive Russian aggression.

With his students and parish, Fr. Shestak has been involved in helping Ukrainian defenders and internally displaced persons, millions of whom settled in the country’s West. The university has collected more than 3 million dollars for humanitarian aid. To Fr. Shestak and his helpers, it’s all personal, and there is no time and place for the impartiality that the Pope is adhering to. The University has 36 employees and students defending Ukraine against the Russian invasion, and the university has already lost some of its own to the war. Russia’s devastating war has also forced Fr. Shestak to be not just a priest and professor, but a pillar of emotional support to his students, 20 percent of whom come from the most war-affected areas. He often talks to them, sometimes for hours, about their families, safety, and the feelings they have which are caused by Russian cruelty.

The UGCC’s active stance in Ukrainian society has been vital for the Ukrainian people in their darkest days under Russian imperial, and later Soviet, oppression. Due to this particular history, the Church has adopted the concepts of freedom, independence, and perseverance of the Ukrainian identity. "It is in our spirit to be with our community, to be a partisan, underground church, fighting for freedom," Fr. Andriy explained, noting that much of this context is not understood by the Church in Rome. The Vatican also has stains upon its legacy in the history of UGCC during the Soviet period, Church historian Dr. Babynskiy argues, as it kept objections about the treatment of the UGCC quiet in order to maintain its relations with Moscow.

Today, this disconnect also continues as a result of Russian propaganda in Italy. Fr. Andriy, who gives lectures in communications, knows well how Moscow’s information war has permeated Italian media. Since Russia began its invasion of Ukraine, he has spoken to different Italian new outlets dozens of times, trying to explain the situation to the country that, even to this day, has been intoxicated with the Kremlin’s propaganda by Putin’s loyal state servants (invited for talk shows and news reports on some commercial and public TV channels). As Fr. Andriy Shestak says, “the Kremlin just knows their audience.” It is unclear what information the Vatican receives, but if Italy is intoxicated with Russian state propaganda, the Church’s circles are not immune. While Russian genocidal war takes hundreds of Ukrainian lives every day, Fr. Andriy Shestak hopes that Italians, as well as the Vatican, will “separate facts from propaganda and stand for human dignity.”

Ukrainian ambassador to the Holy See, Andriy Yurash, told RFE/RL that “the Holy See has undergone a great evolution in terms of understanding the realities of this war and responding to it.” Although the Vatican’s approach of positive neutrality will unlikely ever change, Dr. Babynskiy said in June, its rhetoric has in fact gotten tougher. He believes that the Pope played a role in negotiations on humanitarian corridors and evacuation from Mariupol, as well. But to correct the Church’s failings in the eyes of Ukraine, calls for peace are not enough.

Whether Pope Francis visits Kyiv or not, Ukrainians will expect a clear statement — that they have the right to defend their country, that Russia is the perpetrator of this war, and that supply of arms to Ukraine is not evil, as the lives of every Ukrainian depend on it. Ukrainians are fighting for their very existence but “for people with a post-war mindset, it is difficult to believe that there is another large-scale war in Europe,” Dr. Babynskiy explains. “They believe that peace must be preserved at any cost, at the negotiation table. For Ukraine, such peace could mean disappearance.”

What will Joe Biden's election as US President mean for Ukraine? We listened to what experts had to say in a discussion organised by the Kyiv Security Forum.
PODCAST
January 20, 2022