May 29, 2019
The 10th anniversary of the EU’s Eastern Partnership initiative provided a great opportunity for a UkraineWorld analyst, alongside journalists representing other Ukrainian media outlets, to meet Rebecca Harms, a member of the European Parliament. 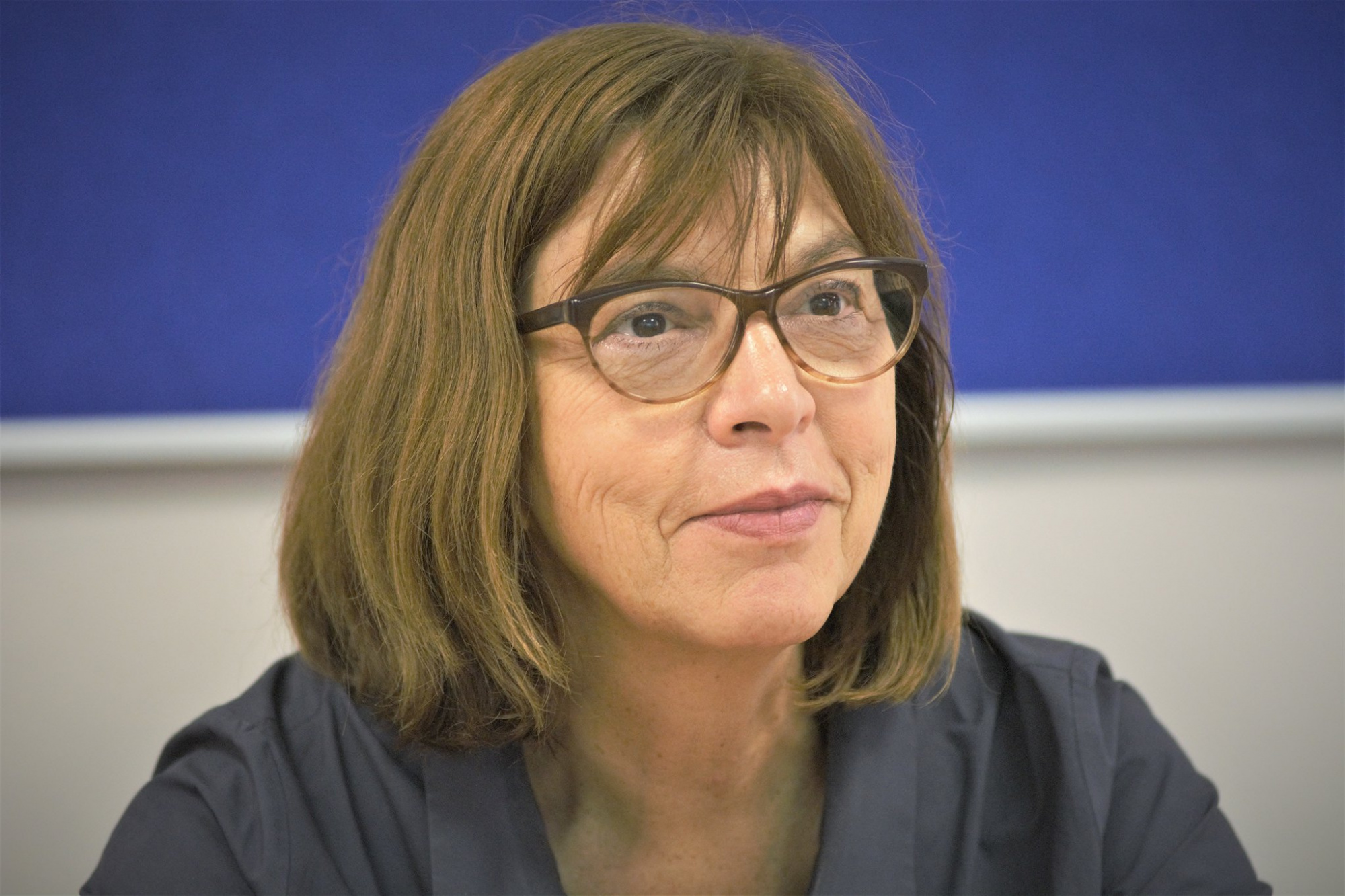 During the conversation, Harms confessed she was not going to run in the European Parliament elections to be held on 23-26 May. "It is also necessary for me after the long time in politics to have a bit of distance and to review what I have done and what I am going to do," she said. Although she has made such a decision, Harms still feels the necessity to continue her engagement in Eastern Europe, especially in Ukraine, because, as she admits, "I do not want to give up on my experience and my friendship towards this country".

Here are the key messages voiced during the meeting.

On the future of EU's Eastern Partnership initiative

I would still defend the idea of Eastern Partnership. Because at the same time it includes flexibility and possibilities for countries under the roof or the umbrella of Eastern Partnership, to go their own way and also in their own rhythm, with their own speed. There is an idea of having different kind of agreements. We have Association Agreements with three countries. We have CEPA with Armenia and we do not yet know the quality of the Agreement, which we might get with Azerbaijan. But it is interesting that, I think, Azerbaijan now wants the agreement more than before, which gives some opportunities. And there is also this idea of Eastern Partnership's 'more for more' principle. In the very beginning, it sounded like punishment, but it is more the idea of supporting ambitions, reforms and frontrunners, if they do what they have agreed to and if they do even more. I think this is very important and it shows also a bit of the real role. 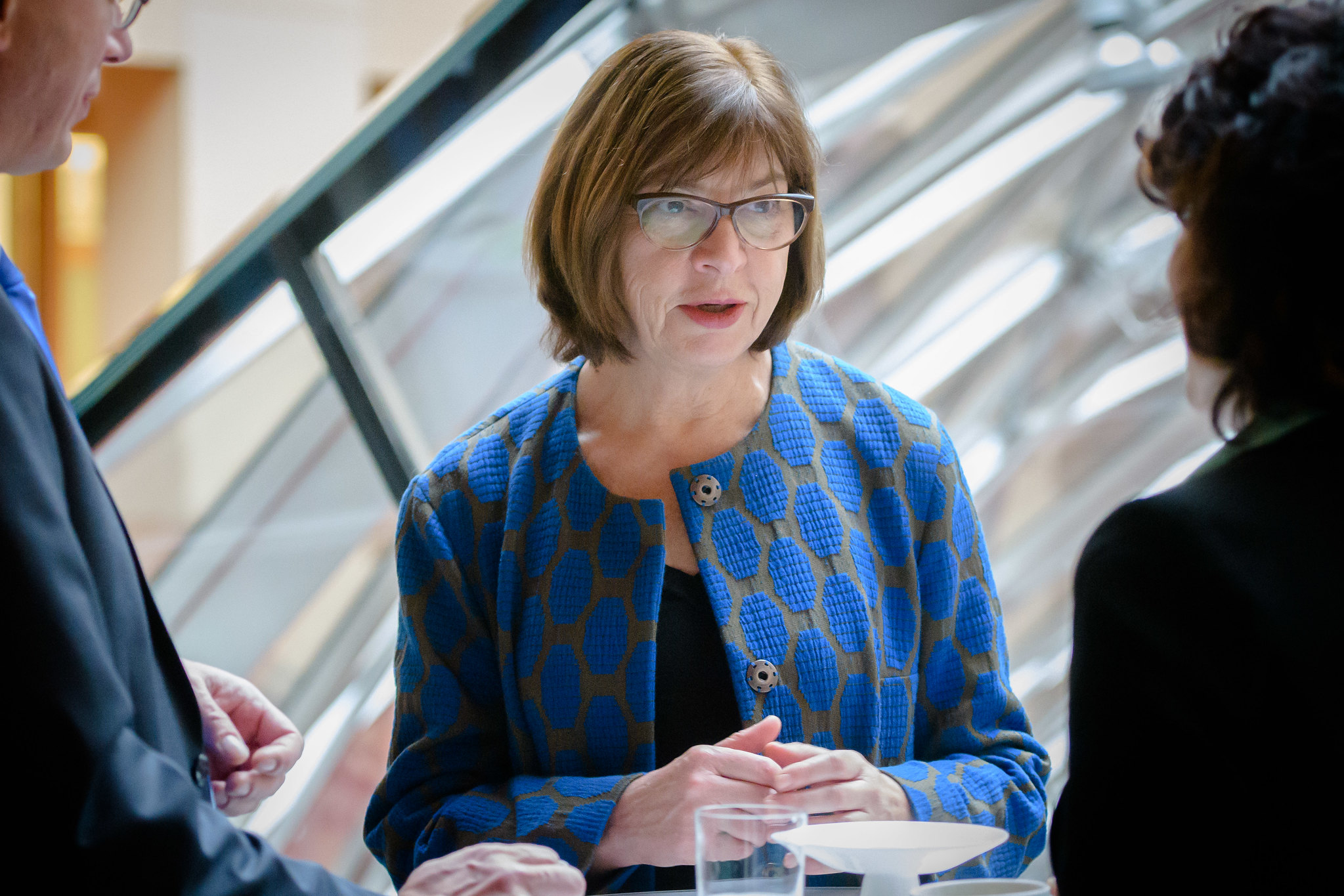 On the capabilities to solve existing conflicts within Eastern Partnership countries

We are getting better and better in most of the Eastern Partnership countries, but concerning the situation in Donbas or Crimea, Ossetia and Abkhazia, Transdnistria or Nagorno-Karabakh, the European Union is not really working on these issues according to the needs. None of the countries from Eastern Partnership will be able to solve what we here nicely call 'protracted conflicts'.

Even war against Ukraine and Donbas is often described as 'conflict' and not as 'war and occupation', what would be the correct wording, from my point of view.

We are not doing enough, based on the post-2014 Council decision. We have sanctions and diplomacy, but there is not enough engagement. And if we want the Eastern Partnership to be successful, to be what Swedish [Foreign] Minister Margot [Wallström] was saying, that countries will be able at a certain moment to join the European Union, then we have to help them to solve these, what we call, 'conflicts'.

On who might undertake responsibility for reforms and changes

The true driver and machine for change and reforms must always be in the countries. You cannot trigger democratic reform, fight against corruption and decentralization only from outside. Either countries are deciding by the majority and by wide consensus for this, then we can come and support what we trigger with the Association Agreements. However, the real capacity, real will and strength must be in the countries. And it also means the processes will not be the same in different countries. If you compare Moldova and Ukraine now, you can easily say that Moldova, under the given circumstances, even after competitive elections, will not deliver major progress on, for example, independence of judiciary.

On existing problems in EU-Ukraine relations

We already had some escalating problems -- when Ukraine decided against recommendations and binding conditions of the European Union and the International Monetary Fund. It happened last year that we refused to provide macro-financial assistance. Also, the IMF delayed a tranche in spite of Ukraine really being in need of money because reforms agreed in the fight against corruption and reforms under the Agreement for the visa-free regime were not done in the way it had been promised. It is something very serious, and I hope it was the last time that Ukraine lost money due to not fulfilling reform promises.

It should not be forgotten that we have the [Association] Agreement that Ukrainians wanted and were even dying for this deal on Maidan and for this path to the European Union.

And, I think, it is now also to fulfill what has been agreed in the interests of Ukraine. The European Union sometimes has the means and the guts to say: 'Okay, not met, then no money'.

On how the EU looks at Volodymyr Zelenskiy

I think that Ukraine is still looking for the program of President Zelenskiy. They know the actor Zelenskiy, they know also some of his ideas. They know a bit how he lives with his family, they know partly his team, but they do not yet know President Zelenskiy. And I would never have expected it to be already known just some weeks after this landslide victory. Europeans here, in the European Union, look at Zelenskiy partly through the eyes of Ukrainian journalists, partly through the eyes of the Western media correspondents and their own idea about Mr. Zelenskiy, how could it be.

On meeting with Volodymyr Zelenskiy

I met him because of one of my friends. I have been convinced that the meeting would be good already six or eight weeks before the election. I said: 'Oh, I cannot, because I will go and observe the elections and I would like not to be in a campaign'. And then I have been promised that it will not be made public and I would be given an opportunity to talk to Mr. Zelenskiy and some members of his team. Everybody would be silent about it, and the promise was kept. So, nobody knew, also not in Brussels, until the final round, that we had already met and that we had already discussed several issues. And I was happy that I had met him, because I could, based on my own experience, recommend to important people in Brussels to go to meetings and to take it very seriously.

On the reasons why Volodymyr Zelenskiy won the elections

I was also not really surprised after the first round that Mr. Zelenskiy was winning, because the distance between him and the competitors was so big that everything else would have been a miracle. So, victory in the second round was not a miracle and was not unexpected.

I think it was not only Petro Poroshenko who lost these elections, it was probably more the old political class from Ukraine losing these elections towards a complete newcomer with no real links and no experience in politics.

Obviously, Ukrainians trusted more in somebody who has no links to the political class than in all those predecessors -- people from the Kuchma and Kravchuk period. And the lessons from this should be learnt by my friends in the Verkhovna Rada before the upcoming parliamentary elections.

On what is Zelenskiy expected to do from the EU's perspective

We would see what Mr. Zelenskiy is doing now. So, with more than seventy percent of the votes there is a huge responsibility on the man and his team behind this victory. Such a victory is an enormous burden for the one is taking office now, because you cannot only speak about unity, you have to unite. Probably, after parliamentary elections you have also to contribute to unity in Parliament. You have to do more for the unity of the East, the Center and the West. I think even this distribution of voters showed that there is something that not only Europeans, but also Ukrainians want a President to do. Whether he will be able to do this, I cannot predict, but obviously, there is a need for this. For us, the rest is about continuing reforms. So, I think, to continue what has been done and to have less obstructions from different bodies and from oligarchs, who see their interests cut or ruled out of what they wish. We would see whether on Bankova Street with another President, with President Zelenskiy, the opportunities for this are getting better. I see that some interesting people are getting ready to assist in this. I, for example, know Aivaras [Abromavičius, former Ukraine's economic development and trade minister] for a certain time. I know him better than [Oleksandr] Danyliuk [former Ukrainian finance minister and newly-appointed secretary of the National Security and Defense Council ]. I know some of the young people in the camp. I think there is a will to develop better in the fight against corruption. What this means for Privatbank or for Mr. Kolomoyskyi [Ukrainian  oligarch who is allegedly connected to President Zelenskiy] and his other interests is not yet decided. It is also not yet clear for me, therefore I cannot say something about it. But I understand that Zelenskiy is trying so far to be independent. I think you noticed that Commissioner [for ENP and Enlargement Negotiations Johannes] Hahn, not only people like me or Anders Aslund [Atlantic Council's Resident Senior Fellow] or other ardent friends with lower political ranks, had said: 'Deoligarchization is important. We have to cut the direct influence of oligarchs to the decision-making process in Bankova, in the government and in the Verkhovna Rada'. And I have some experience in fighting against lobbies, also in Brussels. I know it is tough. 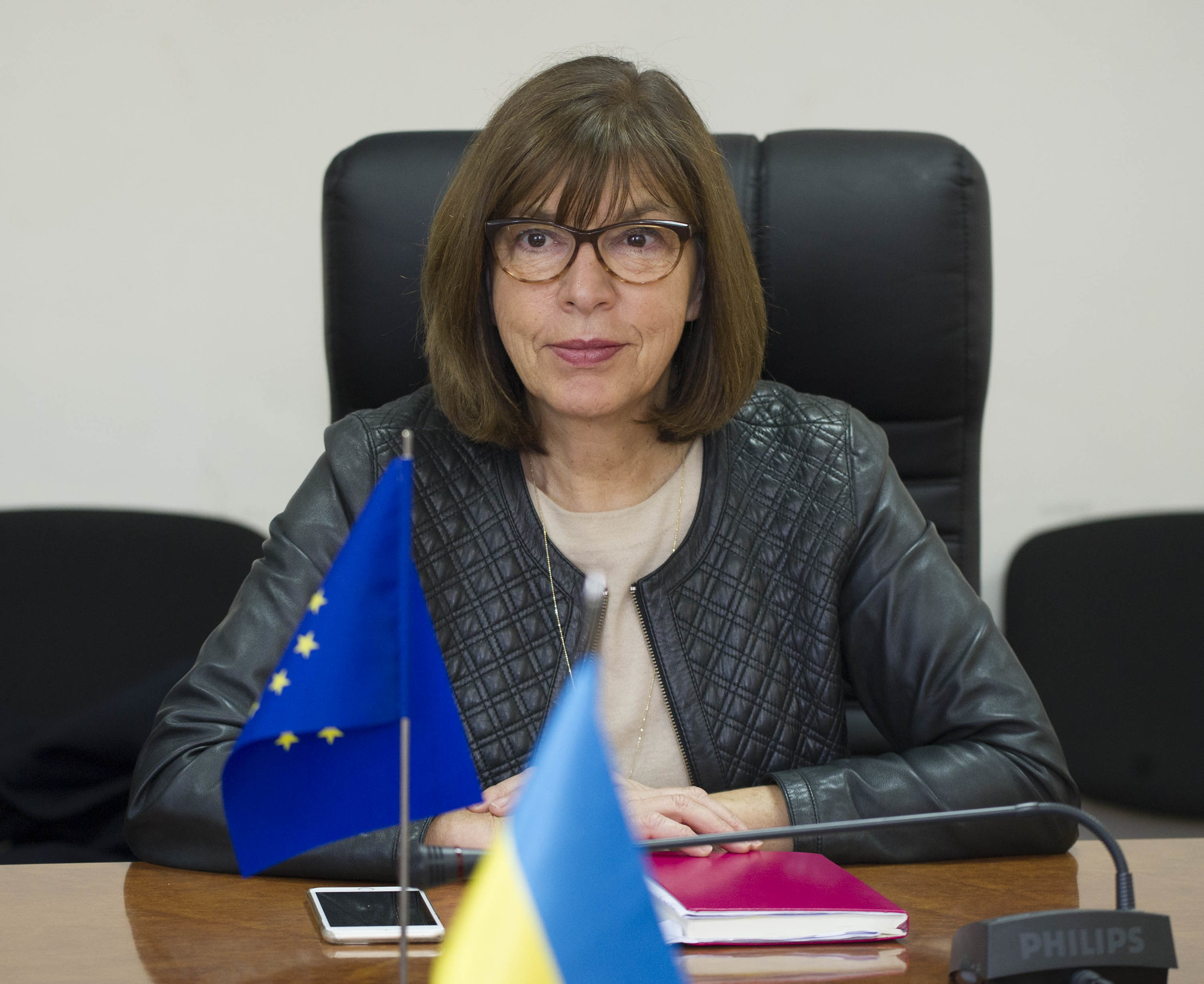 On Russia's possible return to PACE

I am very worried about the fact that a lot of countries, including my own country, are now arguing in favor of Russia to return to the Parliamentary Assembly of the Council of Europe without putting clear conditions on the table. I am sure there are some good arguments for having Russia in the CoE, especially because from the perspectives of civil society or opposition in Russia -- since for them it is still better to have a court where they can go, even if it is not implemented afterwards. There are some serious arguments from this side, but the West should not allow it [back] with the old conditions. And for me, what should be on the table before this vote and before Russia gets backing from France or Germany or which country ever, is the issue of passportization [of citizens of Ukraine by Russia] and prisoners [held by Russia] and that Ukrainian sailors should be recognized as  prisoners of war since the Kerch Strait incident [last November].

On the consequences for Ukraine if Russia returns to PACE

If Russia returns without conditions to the Council of Europe, without meeting at least parts of the resolutions which have been voted by the Parliamentary Assembly, then, I think, the Eastern Partnership countries, especially Ukraine, will lose trust in this international body and they will also lose trust in some of their bilateral partners, like Germany, for example.

I spoke with Mr. Klimkin [former Ukrainian foreign minister for last five years] and he said that if this happens, he sees very bad prospects for the Minsk agreements. I would say he is right. It starts with passportization, then what we have already seen since the very beginning of the annexation of Crimea, then Donbas becomes more [like] Crimea.

On how the Minsk process should develop further

For Minsk, the most important thing is to be more active. Not only always reactivate Minsk meetings if we have another outbreak of war in Donbas. And to be more decisive in our diplomacy towards Mr. Putin [Russian president] and the Kremlin. I would not say that Minsk is already lost, but if we do not work on this regularly and in an ongoing fashion, then we will lose it.

Kostiantyn Romashko
analyst and journalist, UkraineWorld and Internews Ukraine, from Brussels
Next article

Women’s increasing presence in male-dominated fields has not removed the discrimination and pressure they face in Ukraine.