Rooted in Reality. An Essay about the War

September 29, 2022
An essay about this war by Volodymyr Yermolenko, Ukrainian philosopher and UkraineWorld's editor-in-chief. 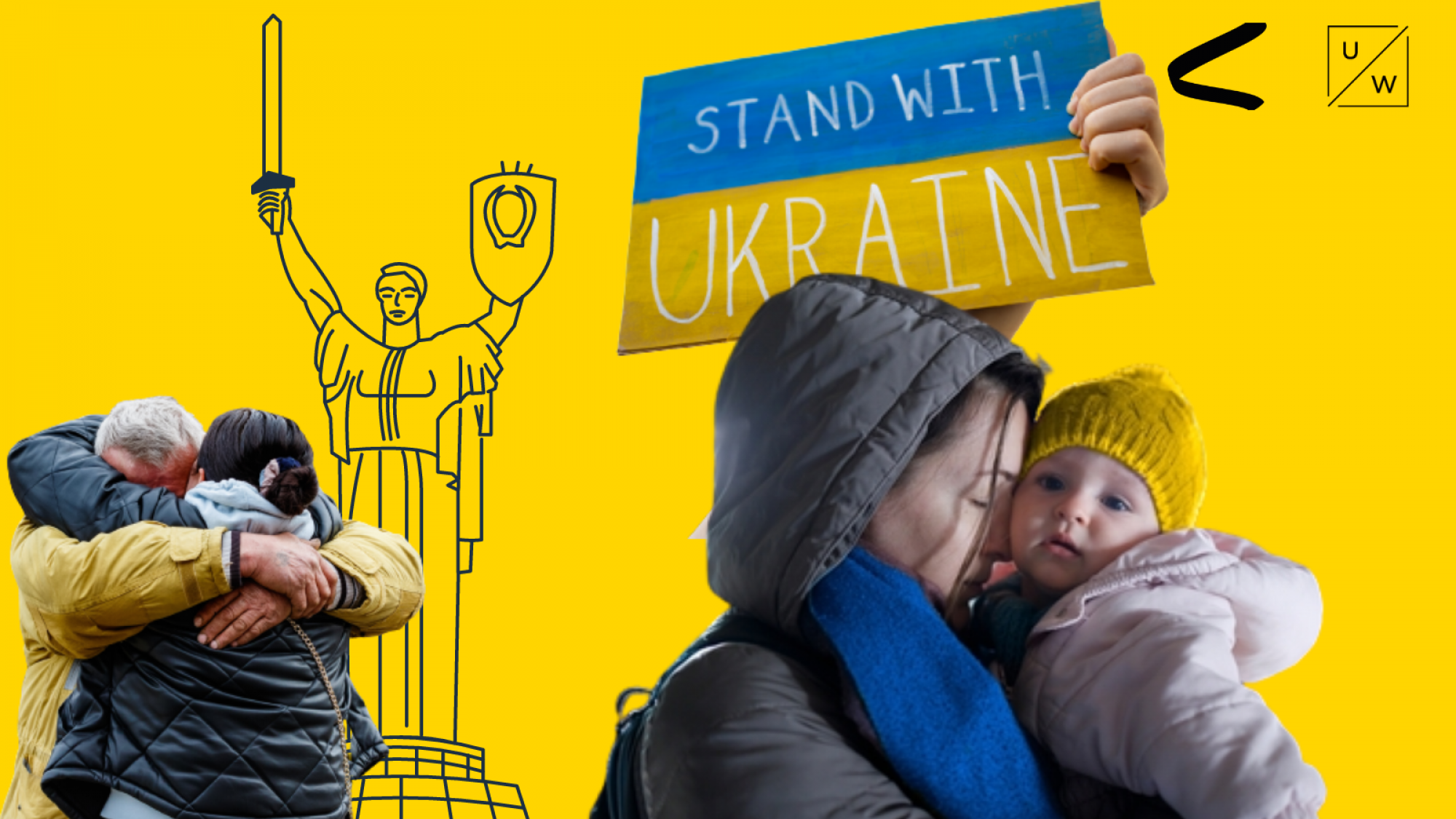 As we leave Bobryk near Kyiv, we see a crushed car. An ordinary vehicle is now a jumbled heap of metal. A crushed iron bug. A Russian tank drove over it. While the headman of the neighboring village was still in it. He managed to jump out a few seconds before impact, but easily might not have.

Cars crushed by Russian tanks are a common sight in this war. Bucha, Irpin, Hostomel – each of these small towns has its own “car cemetery,” where you can see these heaps of crushed metal. Many have been shot or shelled. Sometimes with people in them. Why do Russian tank drivers invariably feel the need to “crush” them? Not just to shoot them, not just to kill people trying to flee the war, but to actually crush them? Maybe they felt so weak that they had convince themselves of their own strength. Maybe they saw the Ukrainians as parasitic insects who must be ground into the dirt, enjoying the crunch of their thin shells. Maybe they experienced what was happening to them as a virtual game with no meaningful limits. Maybe they were envious that families in Ukrainian villages have cars – sometimes even several. We can accept any one of these explanations – or all of them at once. But they all point to a single symptom: the Russians are fighting against reality in this war. They hate reality so much they can’t stand it. A car belonging to a Ukrainian villager represents an unbearable, unpleasant and illegal example of reality. Killing it is not enough. It must be crushed like an insect. With the strength of a rough boot. With the strength of equipment that can never create – only destroy.

War changes your understanding of what is real and what is not. What you always considered impossible is now real. Rocket strikes on shopping centers with hundreds of people (Kremenchuk); shelling of a train station where dozens of people are waiting for their train (Kramatorsk); murders in basements after brutal torture (Bucha); keeping people in basements for weeks like freight cars (Yahidne); the total destruction of cities and mass graves filled with thousands of people (Mariupol) – just a few years ago we thought all these things were impossible.We thought a repeat of the Holocaust or Holodomor was impossible. Now it’s all happening, now it is mercilessly real. It negates all of our previous beliefs about what was possible.

The residents of Chernihiv told us about life in the city during the heaviest shelling. Money lost all meaning. Everyone very rapidly switched to bartering, the most basic barter in which the most unexpected things proved to be currency: cigarettes, for example. And food: war doesn’t let you choose. At some point, you may find yourself in a situation in which the only available food is chicken, that volunteers have delivered. Or maybe shrimp, which is still available at the store. And there’s nothing other than shrimp. The only available reality is shrimp.

War quickly amputates reality. Deprives it of very many colors. The most ordinary things become unavailable. When Mariupol was left without water, people used the snow that still lay on the ground in early March. The very cold that made the nights intolerable (there wasn’t any heat) was the same cold that offered the promise of salvation: you could turn snow into water. A much more useful miracle than turning water into wine.

During wartime, reality narrows: you see only the small fragment illuminated by the spotlight of your wounded consciousness. It seizes on this fragment in isolation from everything surrounding it, like a ray of light in a baroque painting. You can see only what this celestial ray illuminates. The breadth of reality you’d become accustomed to during peacetime no longer exists. The space of countries, seas, and continents is replaced by the space of very specific coordinates. Reality becomes both poorer and sharper. You could cut yourself on it. It hurts. Reality here stabs, cuts, explodes, shoots, pierces. The only path out of this reality leads to heaven or hell.

This multiplicity disappears during war. It is suddenly impossible to run away. You can’t get on a plane to fly somewhere. You can’t open a book just to read something. You can’t watch a movie in the evening. Your mind has no more place for movies. There is no space for warm, happy thoughts in your imagined geography. Even when someone suggests going somewhere abroad you just shrug your shoulders: what for? You suddenly see your country as an infant who you can’t abandon under any circumstances. You suddenly feel like if you cross the border, everything will fall apart. Planetary motion will stop.

Leibniz’s idea of possible worlds could come into being only during peacetime. Leibniz himself become possible in Europe only after the religious wars ended. A Europe that could finally breathe a sigh of relief. Shakespeare could never have developed this idea. There are no possible worlds in the drama of Shakespeare or Sophocles, Racine or Lesya Ukrainka. There is only a pitiless reality that can’t be escaped. That will kill you sooner or later. That will crush your hopes. And you hate it for its cruelty. But you also love it, because it’s all you have. You won’t escape it. You must bear its name.

War is truly like a dramatic poem. Drama may be the most honest literary genre. There is nothing superfluous here. No descriptions, no landscapes, no inner world or other worlds. Only action. And every action, every second of it, changes everything. Change is possible in drama, but only along a vertical axis, not the horizontal. Drama overturns the world, stands the pyramid on its tip. The bottom rises to the top, throwing the top down. In a drama, you can be simultaneously from “the top and bottom”: you can’t be anywhere in the middle.

In the Saltivka district of Kharkiv, the wounded area that suffered most from the military actions, we saw a car that had been thrown several meters in the air by the blast wave. The car landed on the roof of a garage and there it remained. When you watch the video of the attack on Kremenchuk, you see how iron and concrete suddenly rain down on people the size of insects. Russian ‘hail’ from the skies.

We all live in this blast wave reality. We’ve been thrown into the air like small, helpless kittens. And we don’t know if we’ll catch onto the heights or crash.

War quickly turns you into a witness. Into that which has crossed through the rift of history. When you’re a witness, you have a lot you can tell. But most often you lose the gift of speech. There may be no occasion for telling your story. Or you can’t find the necessary words. Or the necessary words simply don’t exist in nature.

In this instant, you understand what history is. History is what happens to you at the very moment you may cease to exist. History is a wary walk edging the abyss of non-being.

After all, it is always a story of life and death. About those who could have died, but leaped across the abyss. Or those who jumped into the abyss. Who died for us. In a war, people don’t simply die. They always die for someone. Death is no longer a private matter. Death doesn’t just depress us, it obligates us. It is always a beginning and not just an end.

In the war you understand: today you are alive because someone else died. Someone protected your life with their own. And so each death becomes a connection. Each death increases us. Each death enriches us with names. We are covered with them – the names of our heroes. We give these names to our trees and flowers. We want these names to grow roots. Roots into heaven.

Yes, there is this paradox. In wartime, reality narrows – but it also expands. Your reality becomes just a small fragment illuminated by a spotlight. At the same time, you know far more than you did before. You know many more names. The names of towns and villages. Types of military equipment. Rules of survival. People from all over the world write to you. People you will never see thank your countrymen. In wartime, everyone becomes a signaler. Your life loses all meaning if it is not connected to the lives of others. “Self-expression” ceases to become a value, because you’ve already stopped expressing yourself. You find strength only when you continue a process rather than initiating a new one; you don’t finish something, you pass it onward. You need to be within the circuit. You do that which you didn’t start and won’t be the one to finish.

And so your microcosm becomes a macrocosm. And you lose yourself to gain yourself.

Disinformation and lies have become their only means of thinking, the air they breathe. When a Muscovite was asked by a journalist what she expected in the near future, she answered: “joy.” 500-kilogram bombs dropped from Russian planes on Ukrainian cities and towns; apartment buildings collapsed like houses of cards burying their residents inside, civilians shot in the back of the head in basements – all of this is a source of joy for her. Another Russian said that he’d stopped communicating with his Ukrainian relatives because they “read the wrong Telegram channels.” We cry out in the language of murdered people and destroyed cities that we see with our own eyes, that come to us in waking dreams and torture us at night. They tell us: “you’re reading the wrong Telegram channels.”

It is absurd and brutal, but it is the truth. This is also the Russian “reality,” that is desperately waging war against reality. Against facts, against the truth.

What can withstand this? A return to life. Touching the harsh surface of reality. Its material simplicity. Its simple undeniability. You simply need to see everything with your own eyes. You have to feel everything and touch everything. You can’t allow yourself to formulate your “world view” from Telegram channels and entertainment television. You have to dive into the river of simple, raw reality. Drop down into it like entering a mine.

Reality is right here. Beside us, below us, above us. Often cruel, sometimes banal, but undeniable. The reality of war reminds us that some people can become beasts again. And we can all die quickly. Our children, too. But there is a way out of this. And there are those who defend us. Who delay the arrival of death for as long as they can. Often at the price of their own lives. Ukrainians grasp reality. The reality of the land, of our villages, the flowering reality of our gardens. We never wanted to leave here. Our metaphysics has always been material, our philosophy is woven into literature, our abstraction grew from the soil of folk art. “Buried knee-deep in the earth, the dark multitude fell and rose up…” wrote Vasyl Stefanyk more than a hundred years ago. “The earth groaned from the beating of their hearts.”

“Knee-deep in the earth.” In the embrace of the earth that groans “from the beating of their hearts.” Ukrainians have merged with reality, have put down roots there.

Perhaps this is why they are so hard to defeat.

Why You Should not Be Naïve about Russian Culture

Ukrainian artists, scientists, fashion models, TV celebrities,- many of them have joined Ukrainian defence or volunteering to help the army or civilians. Look at...
PODCAST
November 28, 2019