January 28, 2021
Ukraine’s legislature cleared all but the final hurdle for Zelensky’s initiative to decrease the number of MPs. What are the motives behind such an initiative? 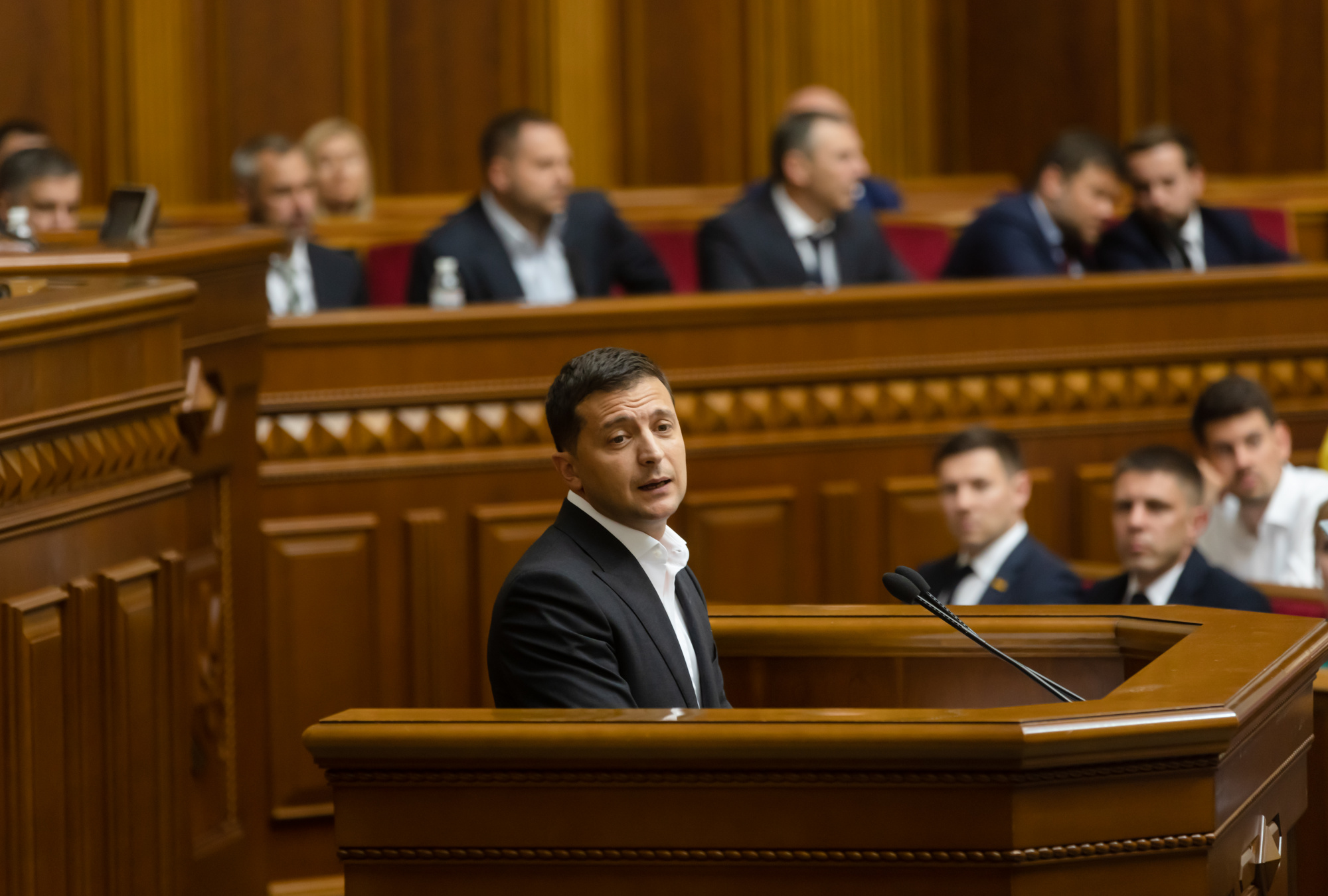 Leading a so-called "electoral revolution", Volodymyr Zelensky swept into power in 2019 after defeating incumbent President Petro Poroshenko with an unprecedented 73% of votes. His groundbreaking victory was followed by the stunning defeat of many experienced and influential politicians at the hands of the hastily-assembled "Sluha Narodu" ("Servant of the People") party in the parliamentary elections several months later. Suddenly, old politicians seemed to have been cast aside, and for what was likely the first time in Ukrainian history, the president held a massive unilateral political mandate.

Playing to his image as a recent political outsider and exploiting a wave of anti-elite sentiments, Zelensky initiated a move to cut the size of Ukraine's parliament, the Verkhovna Rada,  by one third, from its current 450 deputies to 300.

Zelensky wants to cut the Rada's size by one third, from its current 450 deputies to 300

The draft law to accomplish this was first introduced to the Rada in 2019, yet it was only the beginning of the initiative's slow but steady, year-and-a-half-long, journey through the labyrinth of Ukrainian politics.

Zelensky's initiative closely resembles the moves to cut the size of legislatures in other European countries where "old" political elites were swept aside by populist or reformist movements. Examples include Hungary, where Victor Orban almost halved the number of deputies (from 386 to 199) after a disastrous handling of an economic downfall by his socialist predecessor, and Italy, where the populist "Five Star Movement" consistently hammered the reduction of their legislature onto the public agenda until it was approved by both chambers of the parliament and by a referendum. 70% of Italians gave their approval, tired of relentless political bickering and repeated government dysfunction.

In Ukraine, the move reportedly won the approval of 90% of those who took part in the President's unofficial opinion survey during local elections in October 2020.

The move reportedly won the approval of 90% of those who took part in the President's "opinion survey" during local elections in October 2020.

Although it is not clear to what extent this result represents the will of the people, it comes as no surprise that many Ukrainians would support the initiative, seeing their deputies as lazy, corrupt and detached from voters'  interests.

Sarah Whitmore, a Senior Lecturer in Politics at Oxford Brookes University and long-time researcher of Ukraine's parliament, sees similarities with the failed attempt by President Leonid Kuchma and his oligarchic backers to rein in an unruly parliament. In 2000, a measure to cut the Rada's size was coupled to the introduction of a bicameral legislature, the cancellation of the MPs' immunity from prosecution without Rada approval and giving the President the right to dissolve the parliament if it was unable to form a coalition within a prescribed period.

Zelensky's team indeed nods to the approval of Kuchma's initiative in a 2000 referendum, suggesting that the President's initiative would merely help to finally implement the will of the people. However, they frame the initiative as a way to improve the quality of legislators through increased competition for fewer seats, save costs on salaries and benefits, as well as adjust the number of seats to Ukraine's shrinking population.

For instance, Olga Sovgyria, the deputy head of the Rada's Committee on Legal Policy, falls back on the so-called Taagepera formula that prescribes a national legislature size roughly equal to the cube root of the country's population.

This argument is problematic on several counts.

First of all, the Taagepera rule is based on a mathematical model that omits many potentially relevant variables (such as the electoral system) and is only partly supported by research on the size of legislatures. Secondly, there is no evidence that legislatures with a number of seats closer to that predicted by the formula perform better in any meaningful way. Finally, the number of 300 deputies seems to be lower than what the formula should yield when applied to Ukraine's population (the uncertainty surrounding Ukraine's actual population is an issue in itself).

Technocratic arguments aside, there is also no evidence that smaller legislatures help select better candidates.

There is no evidence that smaller legislature help select better candidates

The quality of MPs is instead determined by the way they are chosen for candidacy by their parties and how their work is assessed and controlled once they are elected. If prospective candidates have to buy their places on party lists or spend more money on their electoral campaigns in the regional districts, a smaller parliament may become even more dependent on those who can provide enough resources for candidates to win their races. The downsizing of legislatures can also harm the prospects of smaller parties, independent from oligarchs, that many hope can help transform Ukrainian politics.

Cost savings from reducing the number of deputies would probably be trivial compared to the overall expenses for all state institutions. Yet Sarah Whitmore suggests that some of the saved money could be used to improve the terms and conditions for permanent parliamentary staff, which is responsible for much of the legislative and oversight work.

In any case, the real motives for Zelensky's initiative probably lie elsewhere. Political science research suggests that even if the cost savings are not the real reason for shrinking a legislature, politicians often see the measure as a symbolic move that helps pave the way for drastic public expense cuts in times of recession. This might be one of the motives for bringing Zelensky's initiative back to the fore during the economic slump caused by the pandemic.

Yuriy Matsiyevsky, professor of political science at the Ostroh Academy National University, thinks that the move is primarily aimed at halting the fall in the President's approval. Recent sociological surveys show that no more than 30% of Ukrainians would vote for Zelensky if the presidential elections were held today. It seems that despite the prolonged period of high popularity, even though Zelensky remains the most trusted politician in Ukraine, his approval levels have been following a pattern familiar to previous Ukrainian presidents.

Apparently, by returning to this Rada shrinking initiative, Zelensky hopes to maintain his reformist and anti-elitist image and mobilize his supporters. The other part of the law, the introduction of a proportional electoral formula in the Constitution, may be motivated by the desire to prevent the revanche of the old political guard that had lost its seemingly safe districts to Zelensky's associates.

Whitmore does not see anything wrong with the initiative itself, as the legislature size in Ukraine would not be very far from European standards of representation even after the cut. In any case, within a certain range, the ratio of deputies to population is just a number that does not indicate much about the quality of representation, especially in Ukraine.

However, according to Whitmore, much depends on possible changes to the electoral formula and on whether the currently excessive number of parliamentary committees would be reduced, among many other factors.

In any case, she argues, if the change was not accompanied by other, more fundamental, reforms of the legislature, it would be unlikely to produce any improvement in the parliament's functioning.

Matsiyevsky names three key steps to more fundamental change. Apart from the changes of the rules of political competition, new and programmatic political parties must emerge to replace the current  "party substitutes", which are based almost entirely on alignment with a particular leader and lack clear ideology. The emergence of these new programmatic parties depends upon an improvement in Ukrainians' civil and political education. Only if all three of these conditions are satisfied can the existing "lobbying club" legislature turn into a genuine, representative governing assembly, argues Matsiyevsky.

Sarah Whitmore expects that Zelensky's initiative to shrink the Rada will end in the same way as Kuchma's. Although Kuchma's proposal was overwhelmingly approved by Ukrainians in a (dubious) referendum in April 2000, the Parliament eventually blocked the move, despite all the patronage opportunities and informal powers that the President had. Matsiyevsky also thinks that Zelensky's attempt to downsize the legislature is set to fail.

The initiative's fate still hangs in the balance. To be approved, it needs to get 300 votes in the Rada, as it would amend the Constitution. As of now, many political commentators see this as unlikely. Even if we assume that all 246 Sluha Narodu MPs were to support the move (which will not happen), it would still require 54 votes from other parties. The Opposition Platform For Life seems to have pledged its 39 votes to the cause. However, all other factions are now opposed, for various reasons, despite the fact that many of their members had once toyed with the idea of cutting the number of the deputies, too.

Yet it is too early to tell what will happen next, as it is not unusual in the Rada for party discipline to falter and for deputies to defect from their party's line, perhaps motivated by the patronage resources available to the President. Somewhat paradoxically, if Zelensky wants to deal a symbolic blow to the Rada, he would have to negotiate with some of its members.

If Zelensky wants to deal a symbolic blow to the parliament, he would have to negotiate with some of its members

Whatever the motives and the outcome, the move is unlikely to bring major changes in Ukrainian politics. If anything, its fate in the parliament may serve as a measure of President Zelensky's ability to control its own party. But even if the draft law is approved, much more will be expected from the President.

Since illegally annexing Crimea in 2014, Russia has drastically increased its military presence in the Black Sea region. The Kremlin’s dominance may be temporary...
PODCAST
June 14, 2018