April 26, 2018
On 9 April, 2015, the Verkhovna Rada adopted the Law «On Condemnation of the Communist and National-Socialist (Nazi) Totalitarian Regimes in Ukraine and Prohibition of Their Propaganda and Symbols». This Law introduced the process of de-Sovietisation in Ukraine into the legislative field. The third anniversary of the Law’s implementation is a good occasion to talk about the problems and results of de-Sovietisation. 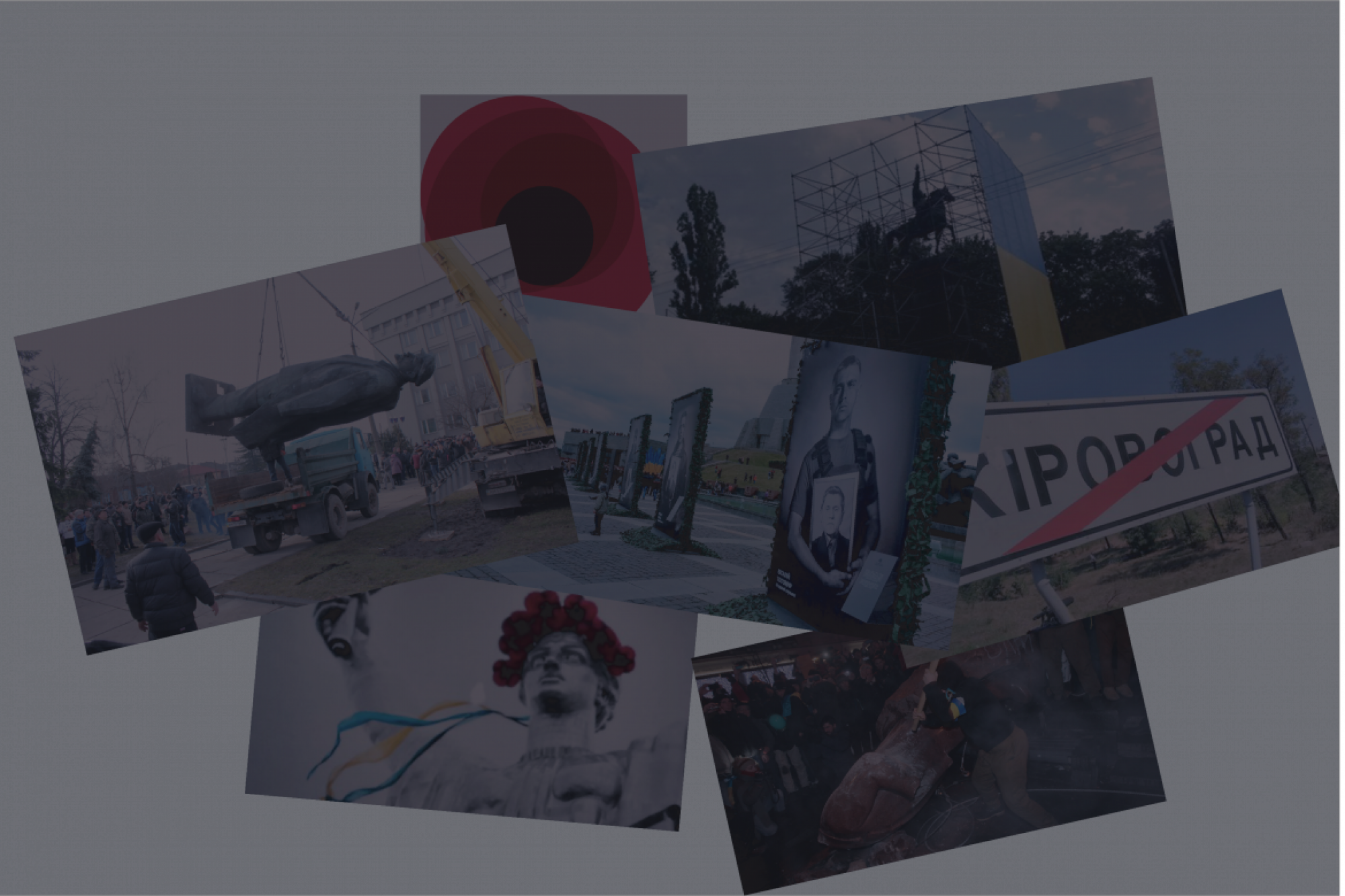 In May 2016 Volodymyr Viatrovych, the head of the Ukrainian Institute of National Remembrance, (a body of the central executive and the main promoter of the Law and de-Sovietisation in general) called de-Sovietisation «an integral element of the reforms taking place in a country that is seeking to become democratic». In July 2016 Andriy Parubiy, the Chairman of the Ukraine's Parliament, shared this opinion and called de-Sovietisation «an extremely important reform, which transforming Ukraine from a post-colonial to a truly independent European state».

In this article, we will try to determine whether Ukrainian de-Sovietisation has a significant impact on the democratisation of Ukrainian society and whether it meets European cultural approaches.

En masse demolitions of Lenin monuments became the most noticeable and biggest part of de-Sovietisation. It was called «leninopad», which could be translated to English as «Lenin-fall». It started with the demolition of a big Lenin monument in downtown Kyiv on 8 December, 2013, during the Euromaidan protests. Starting from February 2014, protesters in regions demolished local monuments to Lenin on a mass scale as a sign of solidarity with Euromaidan. And «Lenin-fall» did not stop with the end of Euromaidan.

Over the course of 16 months, from the start of «Lenin-fall» and before the adoption of the the de-Sovietisation Law, 648 monuments of Lenin were demolished in Ukraine. The Law ordered local authorities to dismantle monuments and memorials to personalities, who held senior positions in the Communist party or were involved in the establishing the Soviet regime in Ukraine. Regional bodies had 6 months from the date of the Law's implementation date. Therefore, spontaneous massive demolitions were transformed by the authorities into controlled planned dismantling. Another 382 Lenin monuments were demolished in Ukraine within the framework of the Law's coming into effect. The total number of demolished Soviet monuments, memorials and memorable signs in Ukraine currently stands at 2,500, according to UINR data.

Some planned demolitions sparked public discussion and demonstrated controversies in the perception of Soviet heritage in Ukraine. For instance, Viatrovych stated that the monument in Kyiv's of Mykola Shchors, Bolshevik army commander, mostly known as the main character of famous Ukrainian film-director Oleksander Dovzhenko's movie «Shchors», is a subject to being torn down, according to the Law. The Kyiv authorities said that they cannot demolish this monument now as it is officially recognised as part of the city's cultural heritage. In response to that, a group of radical right activists tried to demolish the monument by themselves, but the Police prevented this. Still, they succeeded in damaging the monument. The UINR Director did not condemn this damage and accused the city council of delaying the decision on the monument. At the same time, a group of intellectuals opposed the demolition, because of the artistic value of the monument. For instance, famous Ukrainian painter Oleksandr Roitburd suggested that the dedication to Mykola Shchors be taken down from monument and a memorial plate be installed to explain the origin of the myth of Shchors.

Many Ukrainian settlements were renamed during Soviet times in honor of Soviet politicians, ideologists or concepts. Some cities returned their historical names in the first years of Ukraine's independence, while others retained their Soviet ones.

Between 25 November, 2015 and 14 July, 2016, the Verkhovna Rada adopted 13 resolutions, which renamed 987 settlements and 25 districts as part of the implementation of de-Sovietisation Law. Most cases of renaming were approved with the local authorities. However, in some cases, either the local authorities or population opposed the idea of renaming or proposed a different name for their hometown.

For instance, in October 2015, at the local referendum in Kirovohrad (named after Soviet Stalinist statesman Sergey Kirov) 35,000 out of 45,000 voters supported the historical name of the city of Yelisavetgrad (in honor of the Russian Empress) as the city's new official name. Viatrovych and later the President of Ukraine's opposed its name, since it «reminds one of colonial dependence on Russia». Six months later, the city was renamed Kropyvnytskyi in honor of Ukrainian dramatist Marko Kropyvnytskyi (this title only got 4th place at the referendum).

The most complicated and controversial task in this case was to create a name for cities, which were founded during the Soviet period and didn't have any other historical name. For instance, Komsomolsk (its name celebrates Komsomol, the communist youth organisation in the Soviet Union) local authorities refused to suggest a new name for city. Thus, Parliament supported the proposal of the UINP to rename the city to Horishni Plavni, which provoked considerable protest in the city. This name, which could be approximately translated to English as «higher swamps», sounded obsolete and rural. It contrasted with the industrial history and landscape of the city. The city's mayor promised to go to court over this renaming.

Since 2015, Ukraine has carried out reform of official celebration ceremonies of Victory Day in the Second World War. The Ukrainian authorities introduced a new name of a holiday (Day of Victory Over Nazism instead of Day of Victory in the Great Patriotic War), new symbols (Remembrance Poppy and motto «Never again» instead of Soviet symbols), a new commemoration day (8 May instead of 9 May) and new commemoration strategies (simultaneous commemoration of the Red Army and UPA veterans of the Ukrainian Insurgent Army), seeking a new concept of World War II memory, deprived of Soviet and modern Russian ideological influence.

In 2014, the President of Ukraine removed the holiday Defender of the Fatherland Day from 23 February, former Soviet Army Day, to the Christian feast of Pokrova (14 October). The President commented on this decision by saying that «Ukraine will never celebrate this holiday on a military-historical calendar of a neighboring country». This way he compared the Soviet Army with modern Russian forces.

In 2017, UINP also expressed the idea of cancelling the holiday on 8 March (International Women's Day) and ensured the registration of the relevant bill in Parliament. Although 8 March is an international holiday, the tradition of a day off on this day has Soviet origins. This idea has a low level of public support. According to opinion polls, only 30% of male respondents and 13% of female respondents supported it.

Global transformation of the cultural space in Ukraine within the framework of de-Sovietisation didn't provoke mass protests. Its quantitative indicators (number of demolished monuments or renamed settlements) also look impressive. This gives ground to say that de-Sovietisation in Ukraine attained some success on the surface. Besides, the opening up of archives of the law-enforcement bodies of the USSR, as advocated by UINR and adopted by a separate law, is a positive development for Ukrainian society.

However, de-Sovietisation strategies caused controversies in some cases and do not always coincide with the public's vision. It is questionable how much the European values and democratic standards match the low level of engagement of local communities in the naming of their own cities or support for damage of official objects of cultural legacy. Besides, the intensive fight against Soviet symbols and «visual incarnations» of the USSR overshadows the comprehension of cultural and political roots of the Soviet regime in Ukraine, many of which still have influence on Ukraine.

UINR representatives usually appeal to the experience of East-Central European (Poland, Hungary, Czech Republic) "transitional justice" measures of the 1990-s for the legitimation of their actions. However, they overlook the fact that the "transitional justice" of the 1990-s mostly consisted of structural reforms of the administrative apparatus and the law-enforcement system, lustration of officials and legal measures condemning the crimes of previous regimes. The fight against Soviet symbols alone cannot replace reforms of Soviet-style administrative and legislative structures.

Many more questions have arisen due to de-Sovietisation processes in Ukraine. Is it correct and expedient to equate Communism with Nazism in Ukraine? Does de-Sovietisation gives a chance to identify constructive elements of the Soviet past for Ukraine (for instance, the rise of Ukrainian culture in the 1920-s or some successes in the emancipation of women)? Is it right to replace Soviet mythology with ambiguous nationalist heroes?

Andriy Liubarets
An analyst at Internews Ukraine and at UkraineWorld, an information and networking initiative
Next article

You may have heard the names Oleh Sentsov, Pavlo Hryb, Volodymyr Balukh – three among 70 Ukrainians illegally detained by the Kremlin. They were imprisoned simply...
VIDEO
October 16, 2020