February 19, 2018
Ukraine has decisively moved toward the West. Previously pulled between East and West, Ukrainians are now more united on key issues that had previously rankled the country for decades. More Ukrainians want educational instruction in Ukrainian, greater numbers prefer EU and NATO membership, and support for democracy far outstrips support for a strongman. 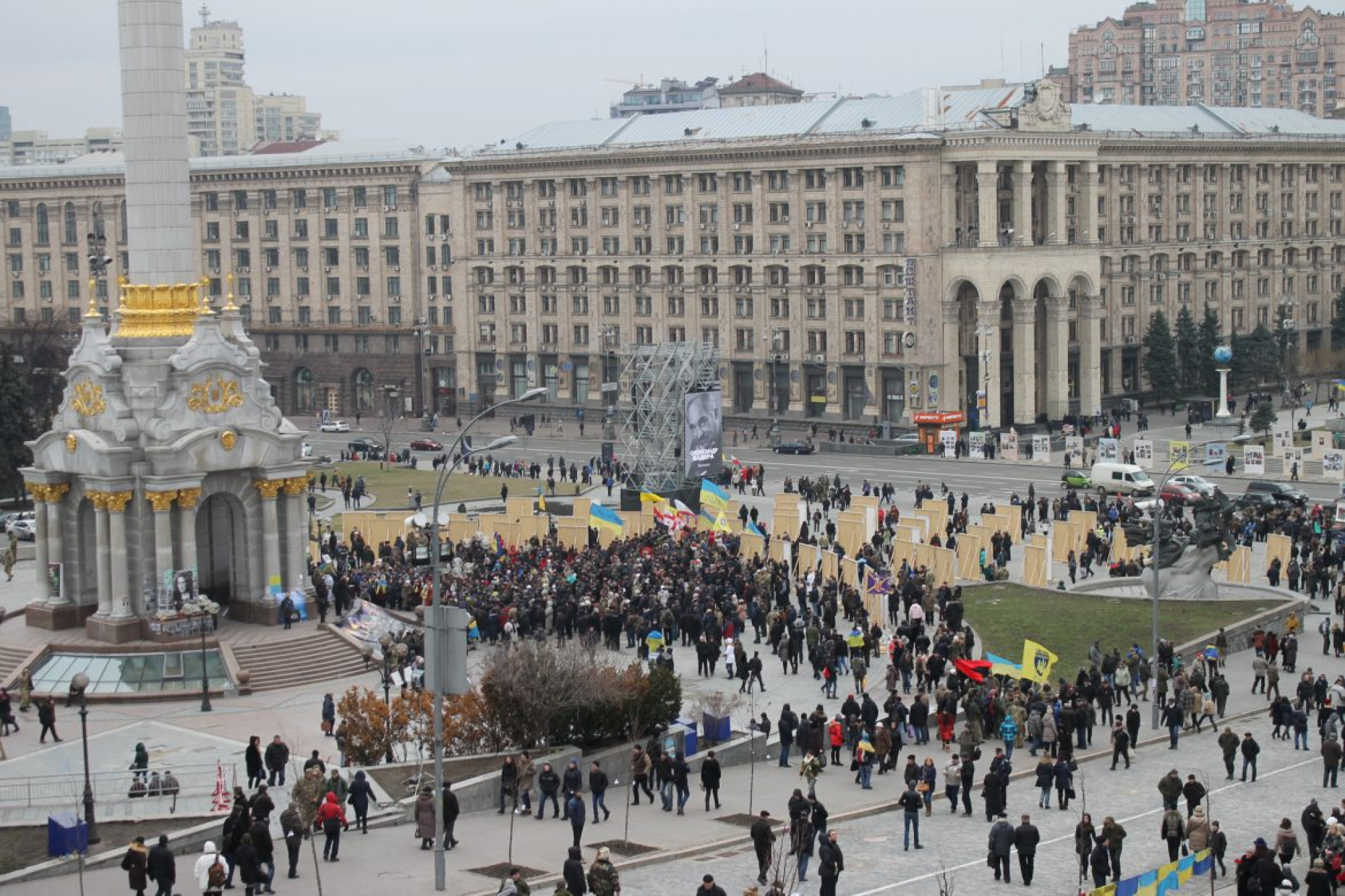 At the same time, the ongoing war waged by Russia and pro-Kremlin separatists has added new fault lines, and these divides will likely be exploited by politicians in the lead up to the 2019 presidential and parliamentary elections. Rather than harping on the East-West divide and language, NATO membership and the future of Ukraine’s conflict-torn East are likely to be wedge issues in future elections.

This doesn’t mean that politicians won’t exploit language and regional differences. They can, and they will. But these issues are less likely to mobilize voters to the degree that they did in the past.

East or West—which is best? This question divided society for many years. The country’s actual foreign policy reflected this hesitation as Kyiv swung between Russia and the West. In 2014, Maidan protesters demanded European values, while the Kremlin, having annexed Ukraine’s Crimea and supported pro-Kremlin separatists in the east, estranged many Ukrainians who previously had positive sentiments toward Russia. 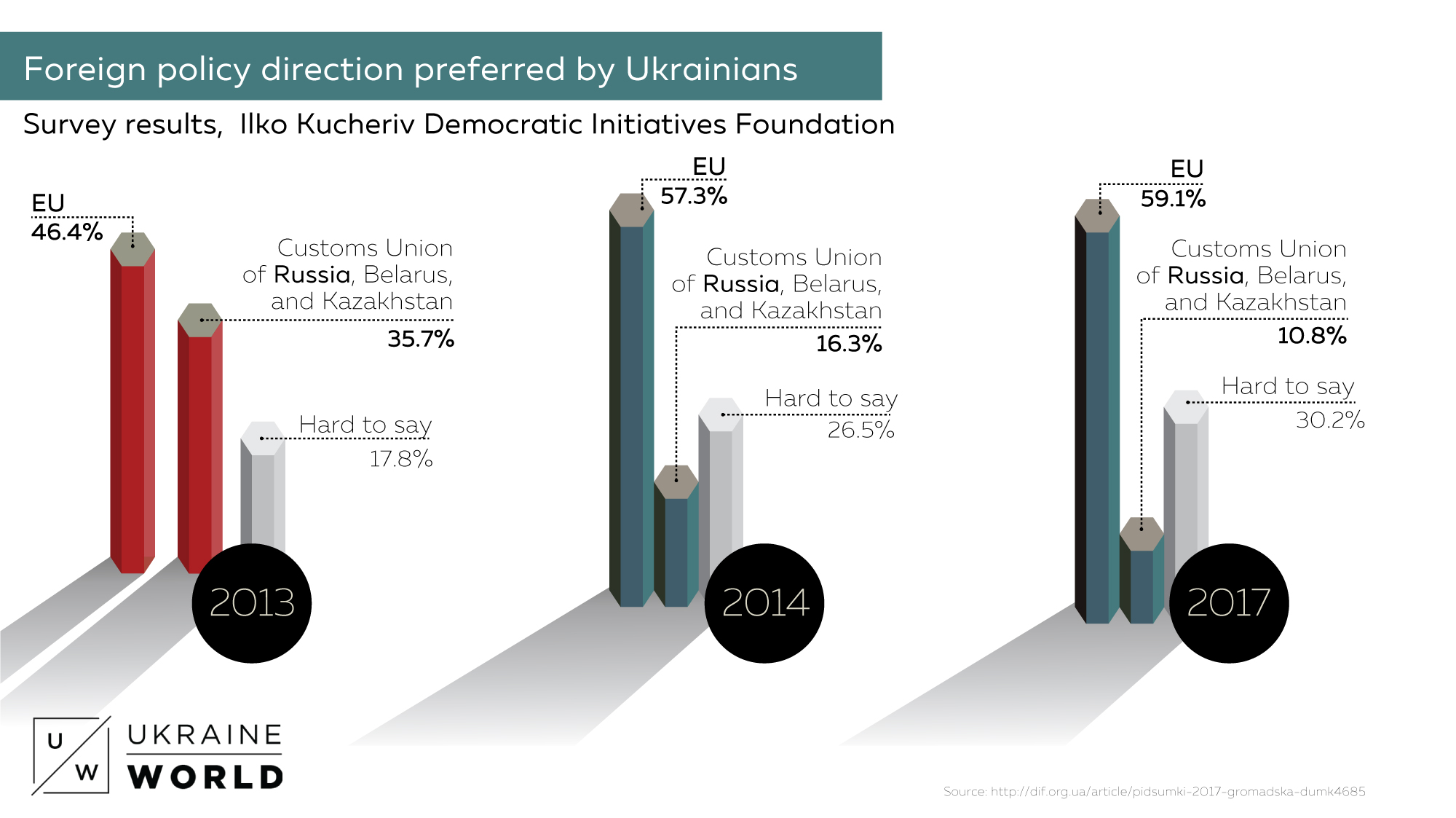 Polls show that a majority of Ukrainians (59 percent) prefer membership in the European Union to the Russian Customs Union (11 percent), a shift that massively changed after the Maidan. In 2013, 46 percent preferred the EU to 36 percent who were in favor of the Customs Union. However, it’s important to caveat the results: many Ukrainians cannot decide which international partner they prefer and there are numerous groups which believe that Ukraine should remain independent from both.

The language card—Ukrainian versus Russian—was another issue often used by politicians during campaign season. As Ukraine was ruled for centuries by the Russian and Soviet empires, the use of the Russian language is still widespread. But the Euromaidan started to change the situation. During the protests, Russian-speaking and Ukrainian-speaking citizens stood together in support of the same values. What language you speak is less important than before, but there is more Ukrainian being spoken today.

While Ukrainians were previously divided on what their first language is—Ukrainian or Russian—and whether Ukrainian should be the main language of education, the vast majority now supports Ukrainian. Society is much more united on the language issue. 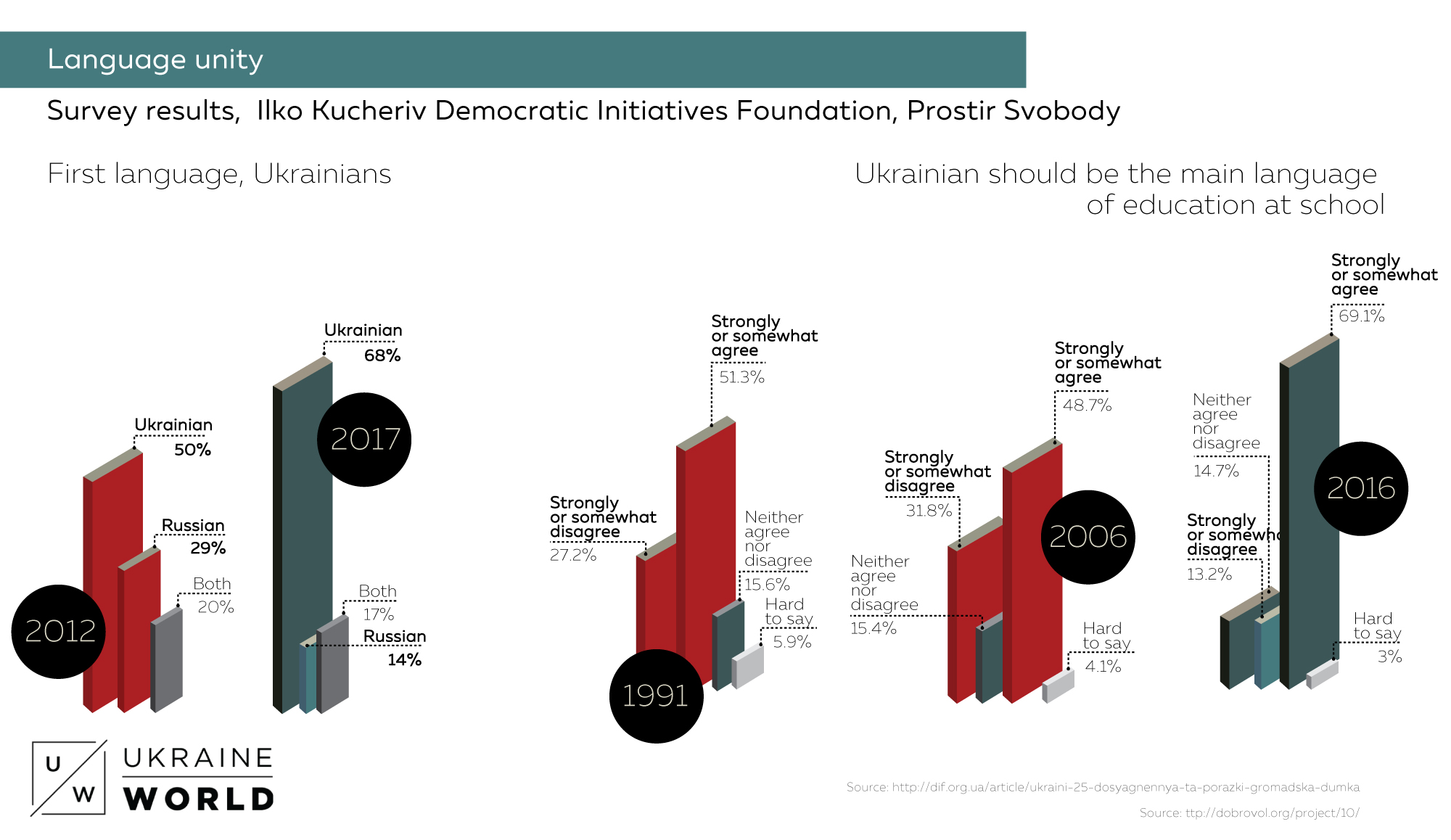 Many people have consciously switched to Ukrainian to identify themselves with an independent nation which has both a language and culture that are distinct from Russia.

The polls also show that people support democracy rather than authoritarianism. Opinion polls in 2015 show that 51 percent of people prefer democracy while 18 percent say that authoritarian rule can be desirable. The 2015 numbers are similar to those in 2006, two years after the Orange Revolution, which means that support for democracy increases after a democratic revolution, as one might expect. Between the Orange and Euromaidan Revolutions, support for democracy dropped as the public grew disillusioned. Support for pro-democratic and pro-authoritarian regimes was almost equal between the revolutions. 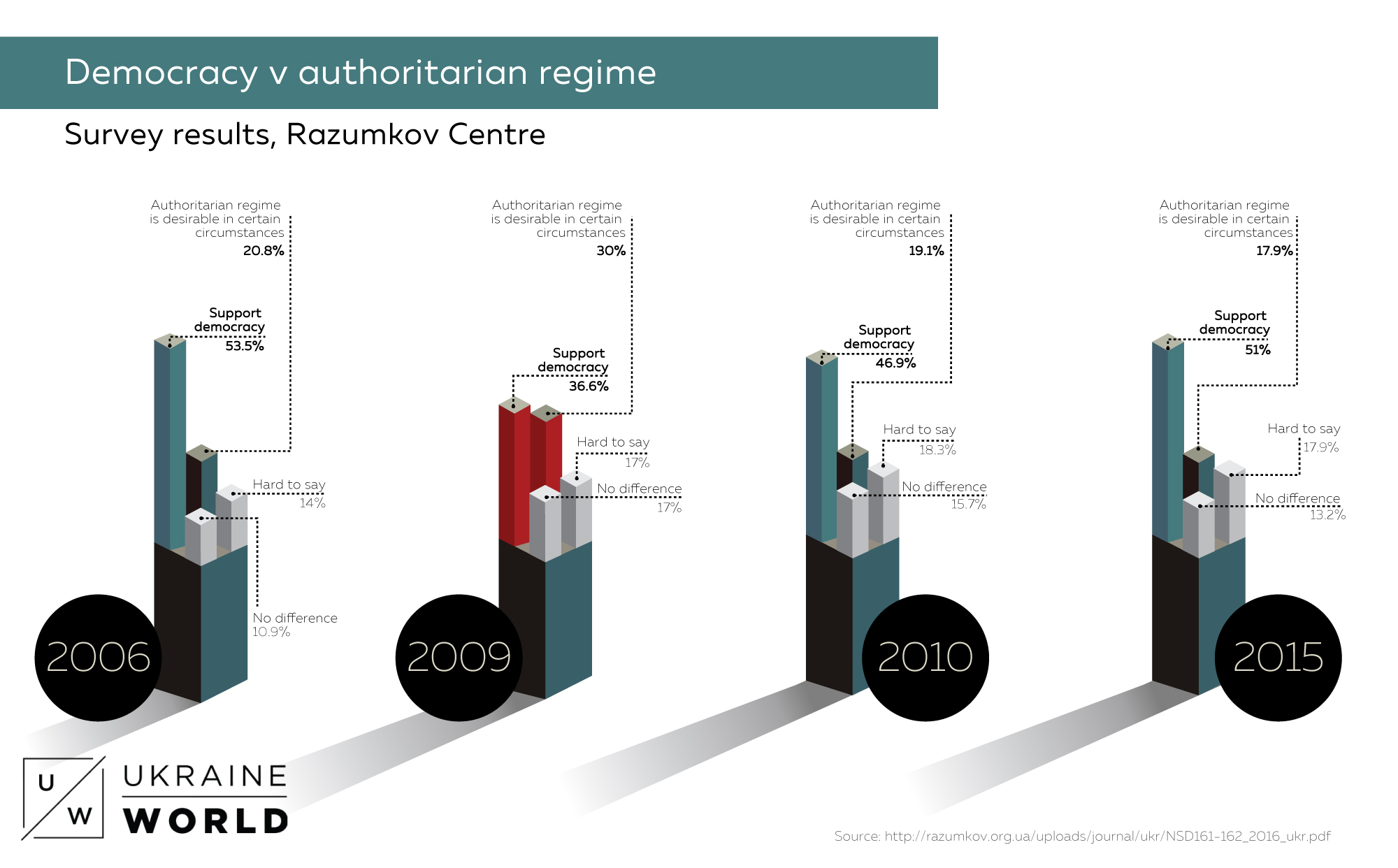 Ukrainians are practical and some may say cynical people. When pollsters ask if the country is going in the right direction, an overwhelming majority normally say that it’s going in the wrong direction. Two months after Yanukovych fled, in April 2014, 34 percent of Ukrainians said the country is going in the right direction. Many hoped their lives would improve, but these expectations soon waned. The majority now think that Ukraine is moving in the wrong direction, mainly because of the economic hardships they feel in their everyday lives 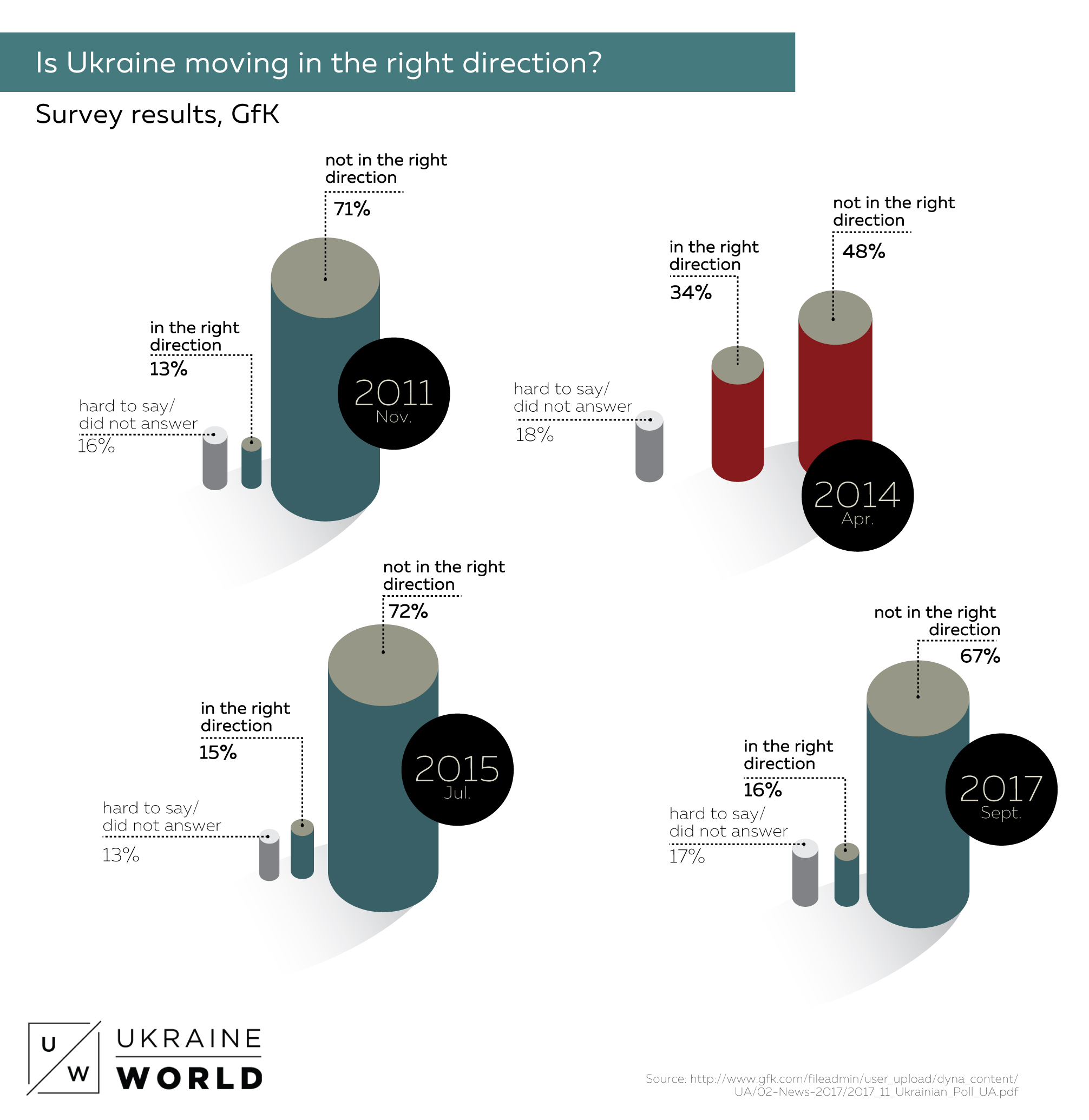 The war in the East is not only uniting Ukrainians; it has also changed attitudes about NATO. Polls shows that 44 percent want to join NATO while 38 percent oppose the idea. In 2011 the vast majority agreed that Ukraine should not join NATO.

NATO membership in Ukraine is now a divisive issue, and one that politicians have exploited for their personal advantages. Earlier, incumbent President Petro Poroshenko promised to hold a referendum on whether to enter NATO. 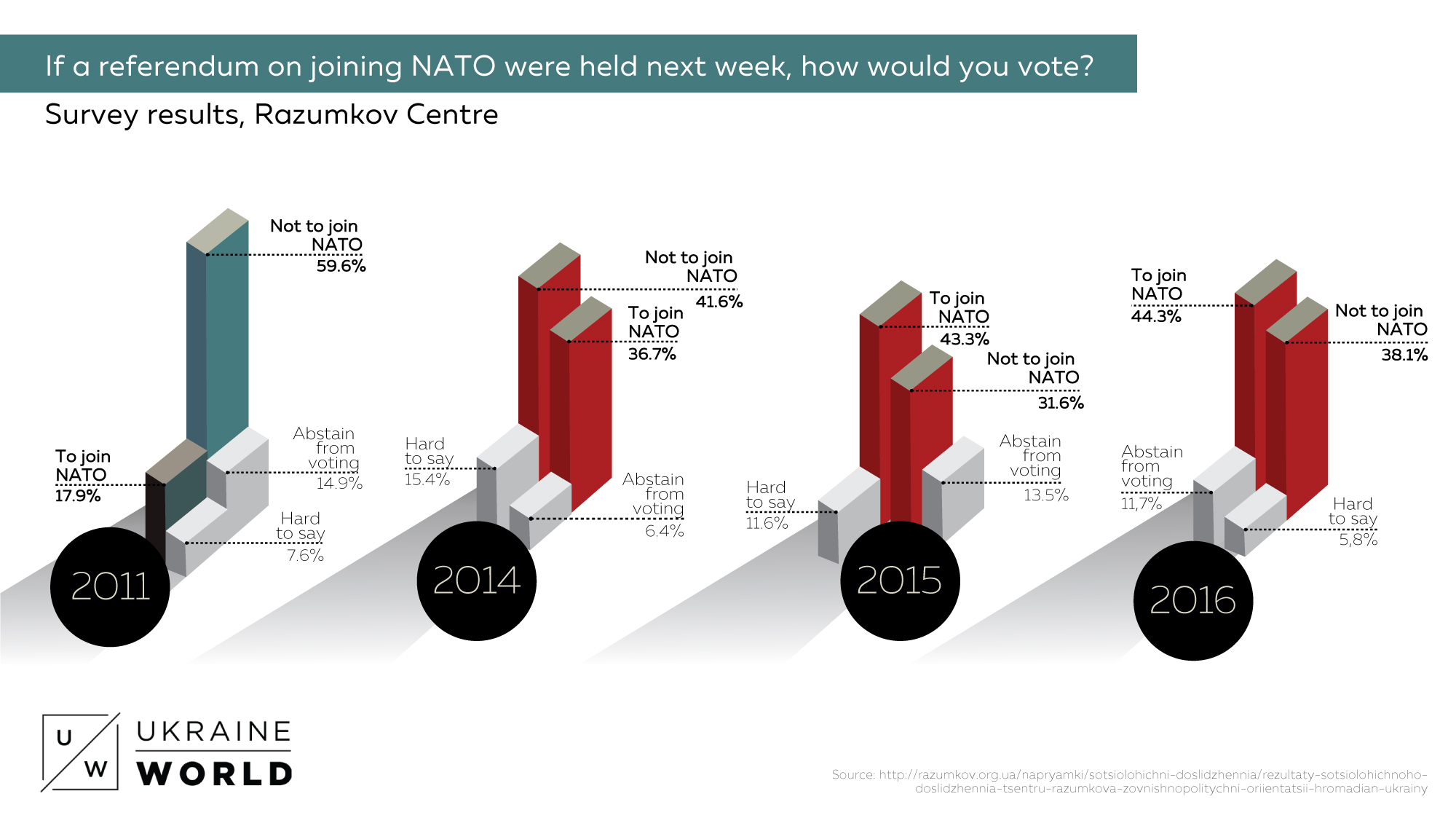 The future of the Donbas, the eastern region occupied by pro-Russian separatists, is another issue of disagreement. Many want to reintegrate it by providing special autonomy for the region. Others believe that Ukraine will be unable to integrate it on its own terms and, therefore, Russian occupation should be taken as a fait accompli. For some, the current state is convenient, with periodical clashes and partial isolation, while others see the Donbas as part of a united Ukraine.

Politicians use the Donbas issue to score political points or to divert attention from criticism on other issues. Their position can change according to voters’ preferences, or it can be ambiguous when speaking to different audiences. 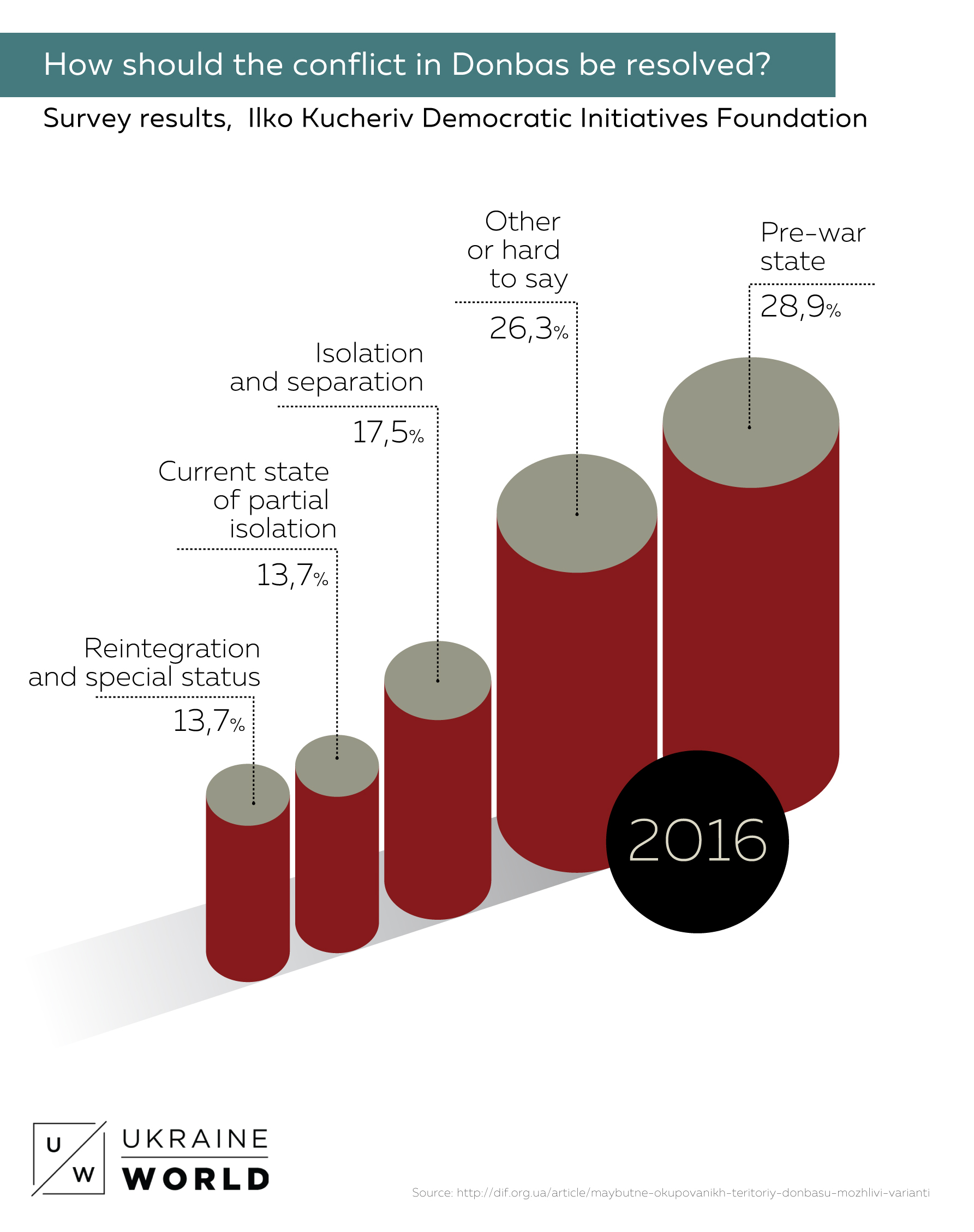 The Maidan and the war shook Ukrainian society. It gave people permission to give up the legacy of the Soviet past and to move forward, choosing their language and country’s destiny. Societal changes always happen gradually and take time to settle, but some of the issues that divide Ukraine today are here to stay.

Ruslan Minich is an analyst at Internews Ukraine and at UkraineWorld, an information and networking initiative.

We starts a regular monthly podcast taking snapshots of key developments in the country over the previous month. Here we look at early 2021: January, February.