February 1, 2018
Ukraine is trying to induce the use of green energy, but is often victim to corrupt schemes. In this article our aim is to delve deeper into this situation and see how Ukraine can handle it. 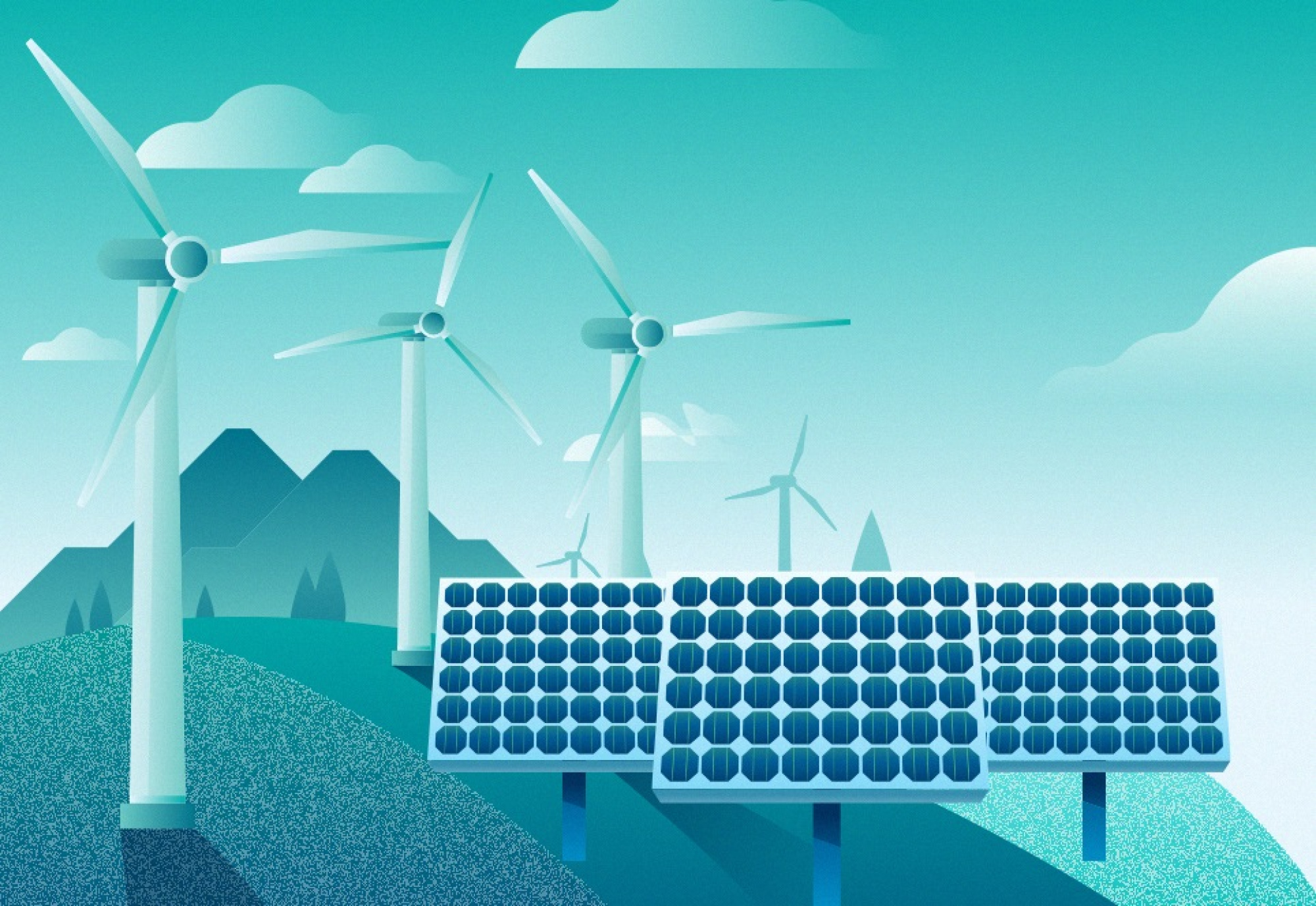 By producing green energy in Ukraine, investors stand to get a return of about 600-800 percent. The feed-in tariff, which was introduced to stimulate sector development, is about 17 euro cents while the real cost of energy is around 2-3 euro cents. Nevertheless, the country is lagging behind in reaching its target of an 11 percent share of renewable sources by 2020.

So, what is not right here and how can it be fixed?

Feed-in tariffs seek to stimulate investment in renewable energy. Earlier, technologies in this sector were at early stages of development and quite expensive. So consumers paid a higher price for energy produced from alternative sources to guarantee a return for producers.

Recently, some green technologies have become more mature and cheaper, particularly wind turbines and solar systems. As a result, many countries shift to less generous schemes of supporting green energy than feed-in tariffs. They switch to auctions for large-scale projects while keeping feed-in tariffs for small-scale installations. 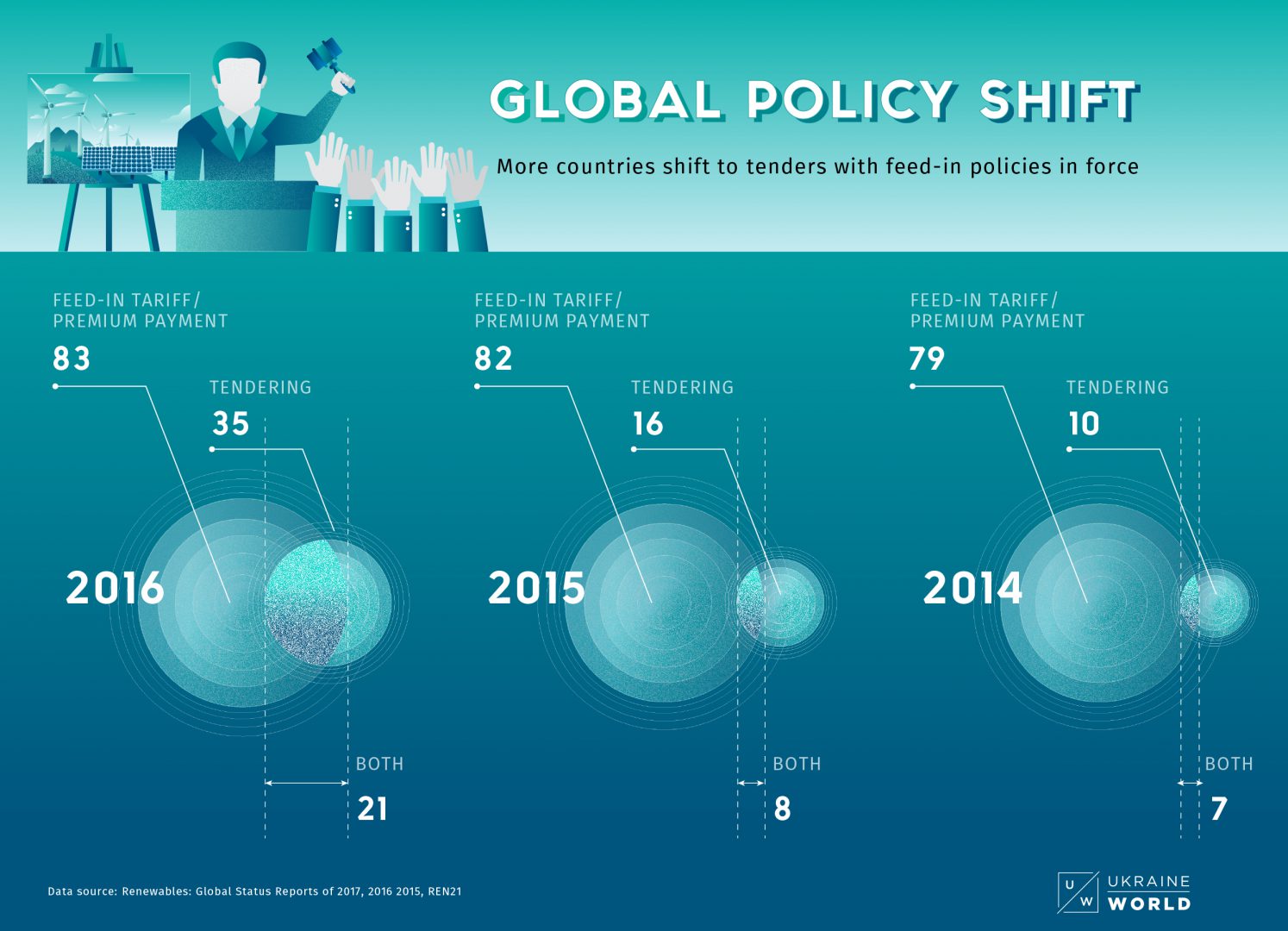 At an auction, the energy price is established by the market and competition, and not by a state, as is the case with feed-in policies. Since the cost of some renewable technologies is decreasing, so is the price of energy that consumers would pay.

Why then does Ukraine retain feed-in tariffs? And why is the progress in renewables slower than expected even though the policy is quite generous?

'There is always a risk that stimulative tariffs in kleptocracies can be exploited not for sector development but to siphon money from the energy market and consumers,' Mykhaylo Honchar, the President of Ukrainian Centre for Global Studies Strategy XXI, told UkraineWorld.

The situation is aggravated by other hurdles, particularly uncertainty about the rules of the game. Until 2015, developers of renewable sources were obliged to use domestic equipment, thereby closing the market for foreign investors.

Feed-in tariff rates in Ukraine are defined in euro, and the national regulator should regularly adjust them in local currency. But such an adjustment was delayed in 2014-2015, and the rates were sometimes lower than they should have been.

At the moment, there are not enough officials at the energy regulator authorized to approve the construction of new plants producing clean energy. This means the loss of 134 MWh in power capacities whilst waiting for such authorization.

In this uncertain environment, high feed-in tariffs can be justified to lure investors. They can take a risk when the potential remuneration makes it well worth it.

'If in a country there is uncertainty about how the power market works, if the procedures for getting authorization to build a power plant are uncertain, then you need to provide stronger economic subsidies to incentivize investors to enter the market,' Nicolò Rossetto, a research associate at the Florence School of Regulation, the European University Institute, said in a personal interview.

Ukrainian experts are now extensively discussing the possibility of introducing reverse auctions. In this case, the state would provide a special tariff only for the winner of a bid who proposes the lowest rate. As a result, the energy price would be market-oriented, competitive and not established by a corrupt state.

Furthermore, auctions seem to be more cost-efficient since consumers pay less for renewable energy than with feed-in tariffs. As a result, even spending the same amount of money, consumers can receive more alternative energy.

'The current feed-in tariffs maximize profit. Auctions, instead, maximize the number of constructed renewable energy plants from each dollar,' admits Andriy Gerus, a board member of The Price of the State NGO and a former member of the national energy regulator.

But they can bring a result – more green energy – only when there is more certainty about the rules and less bureaucratic burden. Otherwise, investors might not take a risk.

'The land should already be allocated, and its designation should be changed from agriculture to energy generation before the auction. Otherwise, the investor would spend about a year completing these bureaucratic procedures. Also, Ukraine should clearly define the grid access point as well as the price of a transformer and its location,' says Georgiy Geletukha, Chairman of the Board at Bioenergy Association of Ukraine public association.

Gerus recommends the 'publishing of auction plans for 3-5 years. In this way, investors would be aware of the plans and could prepare themselves for tenders in advance.'

Though, auctions are effective in the main for large-scale capacities. For households and other small-scale companies, feed-in tariffs are still a better option. The amount of clean energy supplied by small producers is meagre. So they are not a burden for consumers. Furthermore, they can lack experience of how to submit a bid and gather the necessary documents.

In addition, auctions reward those renewable energy sources where the technologies are more mature and less expensive, like wind and solar power. Other types of renewables require generous feed-in tariffs to attract investors. Auctions can hardly lower the energy price if technologies and, as a result, production costs are expensive, says Geletukha.

Clean energy is now a captive of the old Ukrainian system and uncertain rules of the game. It could, however, work for a common good. And even now the general trend is positive. Though the share held by renewables is still tiny, they were in effect non-existent for decades before.

Thanks to the country’s decentralization reform, local communities are more frequently becoming centers of innovations in today’s Ukraine. They are helping to revive...
Ukraine
September 18, 2020

In July, the Ukrainian Parliament adopted a framework law on waste management. If approved, it will jumpstart the country’s waste processing industry and promote...