February 28, 2018
Serhiy Klyuyev, a Ukrainian MP from the close entourage of Viktor Yanukovych (also known as “family”), fled the country in 2014 after the Euromaidan protests. He did not leave empty-handed. According to the data of the Anti-corruption Action Centre he, together with his brother Andriy, stole over 15 billion hryvnias (5 billion euros) by taking loans from Ukrainian banks which were never returned and receiving financial support from the state. Based on the request by Ukraine’s, the EU Council has imposed sanctions against Klyuyev brothers, as well as 17 other officials from Yanukovych’s “family” on 5 March 2014. 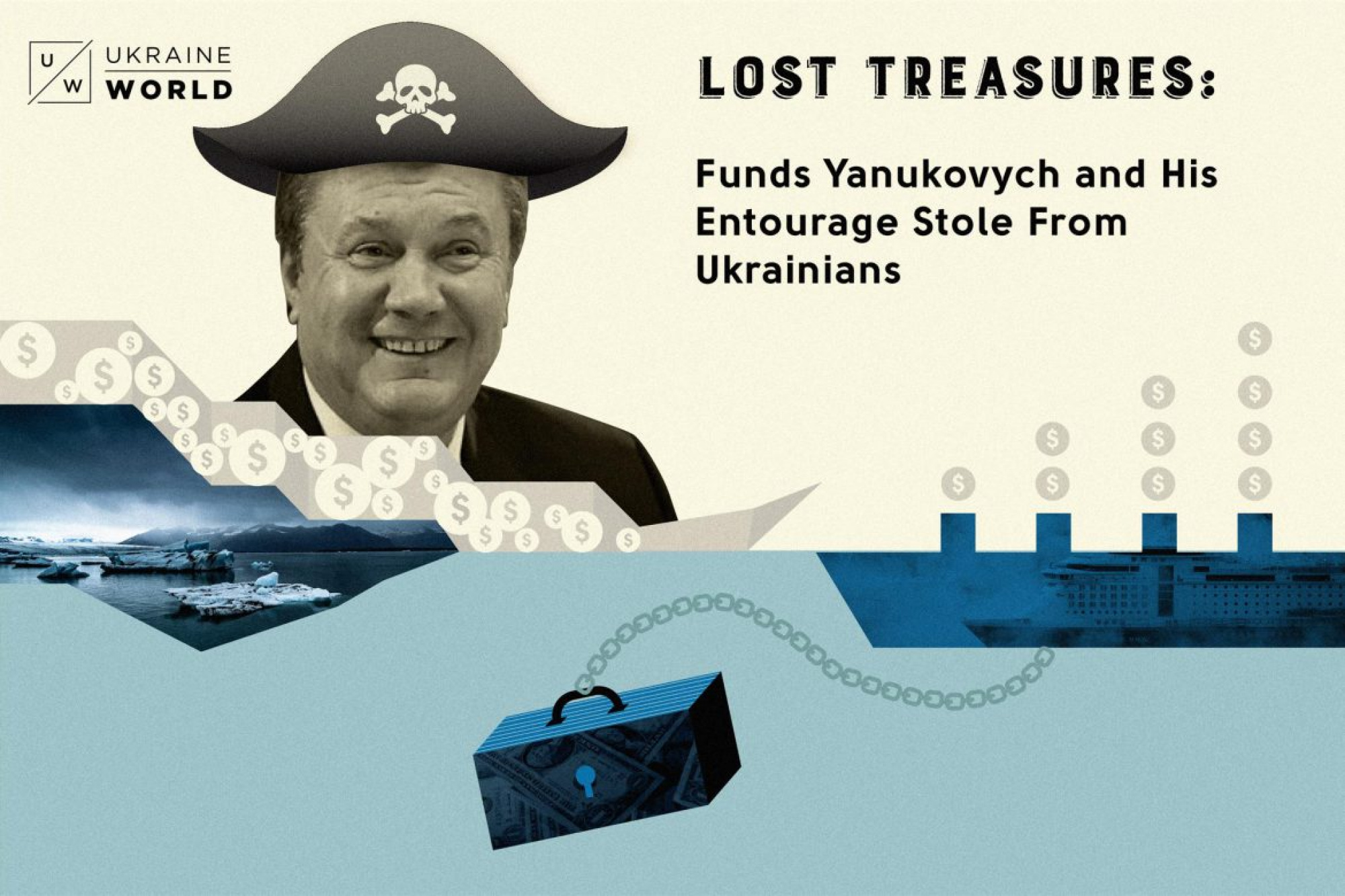 Since then, the Prosecutor-General's Office of Ukraine has been obliged to provide the EU court with sufficient evidence regarding this case. However, the judges questioned "the adequacy of the proof" provided by the Ukrainian side. Therefore, on 21 February 2018, the EU General Court cancelled sanctions imposed by the EU against Serhiy Klyuyev. Daria Kaleniuk, the head of Anti-Corruption Action Centre, is sure that the Ukrainian Prosecutor-General's Office did nothing to save the case. "They have not even launched a special investigation regarding Serhiy Klyuyev," she writes.

Additionally, this case sets a dangerous precedent. For the first time, ongoing sanctions against one of former officials from Yanukovych's "family" have been dropped. All the others, who's guilt Ukraine has not proven yet, could count on the very same. Therefore, the question arises: is Ukraine doing enough to recover the assets stolen by Viktor Yanukovych and his cronies?

The first major problem is that it is almost impossible to calculate the exact amount of money stolen from Ukraine during the four years of Yanukovych's regime. The government has not figured this out in the four years from his escape. According to former Ukrainian Prosecutor General Oleh Mahnitskyi, back in 2014 Yanukovych embezzled in excess of 100 billion dollars over the years of his presidency. However, in 2017 the Prosecutor-General's Office of Ukraine (GPU) has given a "smaller" figure—40 billion dollars (which, nonetheless, is equal to the annual state budget of Ukraine).

Unfortunately, civil society has little access to the data available to investigators. "When we ask the prosecutors how much money has been frozen, they either say that all the accounts of the Yanukovych "family" have been frozen, or say nothing due to the secrecy of the investigation," Tetiana Shevchuk, a lawyer at the Anti-Corruption Action Centre, says in a commentary for UkraineWorld.

"The information about the assets of the most prominent corrupt officials that have been seized, and especially those that might be returned, is of extreme importance, first and foremost, for society. Society wishes to understand when it can expect that at least some of the corrupt officials who spent years robbing the country will be held accountable," writes Yaroslav Yurchyshyn, a chief executive officer at Transparency International Ukraine.

Thorough tracing of the assets of Yanukovych and his entourage is of utmost importance. This is currently the task of Ukraine's State Financial Monitoring Service. According to the Service's official data, assets worth 217.9 billion hryvnias were traced between March 2014 and December 2017. 107.2 million dollars, 15.9 million euros and 135 million Swiss francs belonging to the "family" were blocked in Austria, Great Britain, Latvia, Cyprus, Italy, Liechtenstein, Switzerland and the Netherlands.

But frozen accounts do not mean that the money will be automatically returned to Ukraine's state budget. "In fact, all the assets of Yanukovych and his cronies have been blocked due to their appearance on the sanction lists, not because of the GPU's activities," notes Andrii Sliusar, an expert at Transparency International Ukraine. He points out that other states will return the money of the Yanukovych family only if Ukraine provides sufficient proof that these funds have been received in a criminal way. "Thus, Ukraine should have the initiative in this process. However, irregular information about the investigations published by GPU gives little optimism," Sliusar emphasizes.

In this regard, the case of Yuriy Ivaniushchenko, also known as "Yura Yenakiyevskiy," is an example of investigations dropped due to the inaction of the GPU. A former MP and member of Yanukovych's "family", he appeared on the EU sanctions list in 2014. Ukrainian prosecutors investigated the illegal enrichment regarding 72 million Swiss francs, which were found in his accounts. Therefore, Ivaniushchenko received notification of suspicion from the Ukrainian authorities. However, according to the report by AntAC, few investigative actions have been carried out, and an indictment was not prepared. Thus, the EU lifted sanctions against Ivaniushchenko presumably due to the absence of investigation in Ukraine.

GPU claims that it has done a lot in order to return the stolen funds. On 28 April 2017, Ukrainian Prosecutor-General Yuriy Lutsenko announcedthat the GPU has seized 1.5 billion dollars belonging to Yanukovych. This money has been placed on the accounts of the Ukrainian state-owned bank Oschadbank. Nevertheless, the court verdict on the case has not been published in the official record. It was not available to the general public until 10 January 2018, when the Al Jazeera TV channel published the verdict and claimed that this document "exposes state looting in Ukraine."

The investigation set out the scheme which Yanukovych's "family" used to move state money out of Ukraine. In particular, the Investment Capital Ukraine (ICU) company was involved. "ICU has close links with the current government, having advised billionaire President Poroshenko on the sale of his confectionary company, Roshen. During the time of the Yanukovych fraud, the financial firm was led by the governor of Ukraine's Central Bank, Valeriya Gontareva, a close ally of Poroshenko," the report reads. It is worth noting that Valeriya Gontareva served as the chair of the company's board before she took over the position of National Bank head, held between summer 2014 and autumn 2017.

Meanwhile, many other cases have not been finalised. The low activity of GPU is not the sole reason that the cases of Yanukovych's cronies have not been finalised. Tetiana Shevchuk told UkraineWorld that recovery of stolen assets is a task for the joint work of investigators, prosecutors and judges, and it requires a high level of coordination, as well as political will. According to her, the latter might be lacking.

Ukraine's institutional capacity in this direction has been strengthened by the Asset Recovery and Management Agency (ARMA), which was launched in October 2017 with the support of the EU Anti-Corruption Project for Ukraine. This is a special government body authorised to formulate and implement state policy in the sphere of tracing, finding of assets that are subject to seizure or are intended for seizure. It will also manage seized assets. According to the annual report by ARMA Head Anton Yanchuk, the Agency already has all the necessary resources and has launched its operations.

This is a great institutional addition to other independent law-enforcement and asset recovery bodies aimed at tackling top political corruption—the National Anti-Corruption Bureau (NABU), National Agency for Prevention of Corruption (NAPC) and the Specialised Anti-Corruption Prosecution (SAP). However, the question remains whether the government will allow the newly-created institution to perform at 100% capacity. Recent clashes between GPU and NABU, as well as delays in the creation of the anti-corruption court, have shown that the government may not be interested in tackling corruption.

Vitalii Rybak
An analyst at Internews Ukraine and UkraineWorld, an information and networking initiative
Next article

Why is Ukraine's security key for Europe and the world? What is a wider picture of the Kremlin aggression against Ukraine? Watch our video produced together with...