April 17, 2018
As Ukraine’s 2019 presidential and parliamentary elections near, UkraineWorld has launched a series of articles to examine the main political forces in the country. 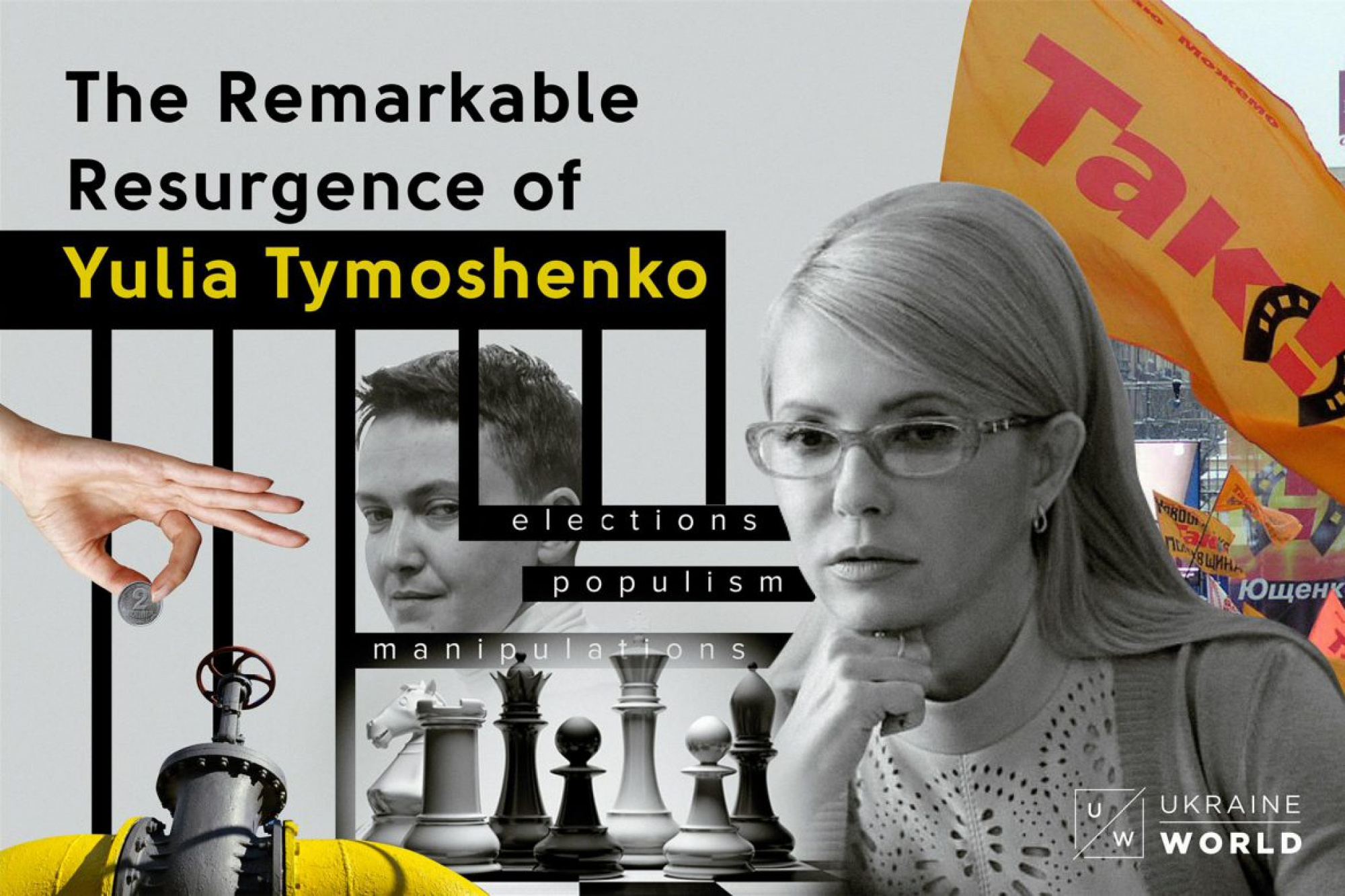 Yulia Tymoshenko tops Ukraine's polls and may be the next president. But her status as the frontrunner was not a foregone conclusion.

A veteran of Ukrainian politics, Tymoshenko has been active since 1997 and her fortunes have waxed and waned. Over the years, she has assumed numerous roles: member of parliament, deputy prime minister, a leader of the Orange Revolution, prime minister, presidential candidate, and political prisoner. Tymoshenko has worked with three out of five of Ukraine's presidents since independence—Leonid Kuchma, Viktor Yushchenko, and Viktor Yanukovych.

Now she is the leader of the Batkivshchyna (Fatherland) political party. This group was formerly part of the Yulia Tymoshenko Bloc, which united several smaller parties, but the party abandoned the Tymoshenko Bloc in 2010 and it ceased to exist. Since then Batkivshchyna has been operating on its own. This is an apt symbol for the development of Tymoshenko's career over the last few years.

When she was imprisoned on August 5, 2011, for a gas supply contract she signed with Russia in 2009 that caused long-term losses for the Ukrainian state budget, her political career slowed down, but it never stopped. Even from behind bars she continued to criticize the Yanukovych government and simultaneously seek the support of the international community. The United States, European Union, and Russia called the case against Tymoshenko politically motivated and urged her release.

Tymoshenko's time in prison made her one of the most internationally recognizable victims of Yanukovych's authoritarian regime, but it didn't help her domestically. Even though her most active supporters visited her in jail and organized rallies for her, Tymoshenko's ratings dropped dramatically.

Tymoshenko's time in prison made her one of the most internationally recognizable victims of Yanukovych's authoritarian regime, but it didn't help her domestically. Even though her most active supporters visited her in jail and organized rallies for her, Tymoshenko's ratings dropped dramatically. While 25 percent of Ukrainians voted for her in the first round of the 2010 presidential election, in 2014, after her release during the Euromaidan, her popularity dropped to 6 percent. The Euromaidan's political leaders—Arseniy Yatsenyuk and Petro Poroshenko—took the majority of Tymoshenko's voters.

But her political skills and resources have helped her rebound. The latest polls show that 25 percent of Ukrainians would vote for her in the first round of the presidential election in 2019. This is a 10 percentage point lead over her closest competitor, Radical Party leader Oleh Liashko. Meanwhile, Poroshenko is in fourth place, with an approval rating of 10 percent. Tymoshenko has a shot at the presidency again, and her chances of winning are significant.

A talented and charismatic speaker, Tymoshenko (many in Ukraine call her by her first name, Yulia) followers are generally middle aged and elderly low-income people. Many Ukrainians faced economic hardship in the years after Russia's military aggression in the Donbas and its trade war against Ukraine. The country's structural reforms since 2014 often do not address citizens' welfare directly, which is why populists like Tymoshenko find an easy way into the hearts of poor voters. Tymoshenko's pet policy—increasing the minimum wage and social payments—is aimed at the most vulnerable in Ukraine.

A talented and charismatic speaker, Tymoshenko (many in Ukraine call her by her first name, Yulia) followers are generally middle aged and elderly low-income people.

In other spheres, Tymoshenko prefers to criticize the current government and reforms but does not provide clear alternatives. For instance, she criticizedKyiv's approach to the Donbas conflict. But when asked about her position on the issue, she preferred to dive into history rather than provide specifics—though she did recommend that another process be launched in place of the Minsk process.

Her political faction abstained from voting for the IMF prescribed pension reform that passed last October. Tymoshenko argued that "it's cynical, ruthless deception of Ukrainians." Her argument that the minimum pension should be 3,000 hryvnias (100 euros) appeals to her target population, which cares little about economic stabilization plans and the recommendations of international donors. "Are these 1,000 hryvnias [the current minimum pension is worth 1,312 hryvnias (42 euros)] a proper 'thank you' for those who have built our country?" Tymoshenko argued.

According to a Vox Ukraine study, only 17 percent of Tymoshenko's statements are true, and 27 percent are outright falsehoods.

Typically for a populist, Tymoshenko's statements often contain false information, manipulations, or exaggerations. According to a Vox Ukraine study, only 17 percent of Tymoshenko's statements are true, and 27 percent are outright falsehoods. "It is hard to catch Tymoshenko lying," the study reads. "She is competent in many topics and has a good command of the data. However, she always uses it for her own benefit, manipulates it, and does not tell the whole truth."

Tymoshenko has learned from her previous mistakes. She avoids controversy and does little beyond making statements. She is trying hard to distance herself from the 2011 scandal around the gas contract with Russia, in which Ukraine agreed to a price formula that was higher than the one charged for the European Union. "Some people say that I had to sign an unfavorable contract with Russia, because Russia cut off gas for Europe, and Europe was freezing…Even if half of the world was freezing, I would not sign an unfavorable contract with Russia," Tymoshenko said in a recent interview.

She has also stepped up her efforts abroad. At the Munich Security Conference, she participated in invitation-only meetings with top US officials and European politicians queued up to speak with her.

Tymoshenko also employs Western specialists. She hired Barry Bennett, a former campaign aide to US President Donald Trump, to provide government relations, public relations, and strategic consulting services, including making contact with members of the Trump administration and Congress on her behalf.

Drawing on a unique combination of charisma, intelligence, and her reputation, as well as her strong populist skills, Yulia is leading in the polls.

Drawing on a unique combination of charisma, intelligence, and her reputation, as well as her strong populist skills, Yulia is leading in the polls. However, if she wins, her rhetoric will hardly save her. She will be expected to fight against foreign aggression, quickly improve citizens' prosperity, continue structural reforms, and maintain good relations with the international community.

Talk is cheap; solving the serious economic and security problems plaguing Ukraine will be another thing entirely for Tymoshenko.

Vitalii Rybak
An analyst at Internews Ukraine and at UkraineWorld, an information and networking initiative.
Next article

It’s election season in Ukraine. While there are forty-two candidates officially registered, the competition, according to recent polls, comes down to three: incumbent...
VIDEO
July 2, 2019