December 13, 2017
Ukraine is a complicated, changing country. It’s far too easy to imagine that the proclamations and positions presented by Ukraine’s government and civil society represent those of the general public. In fact, a close examination of a range of recent national opinion polls—on topics like corruption, the health care system, migration, and Russia—show that the Ukrainian public is less optimistic and West-centric than the country’s leaders. Additionally, there is a wide gap in opinions between the residents of different regions, and between various generations. 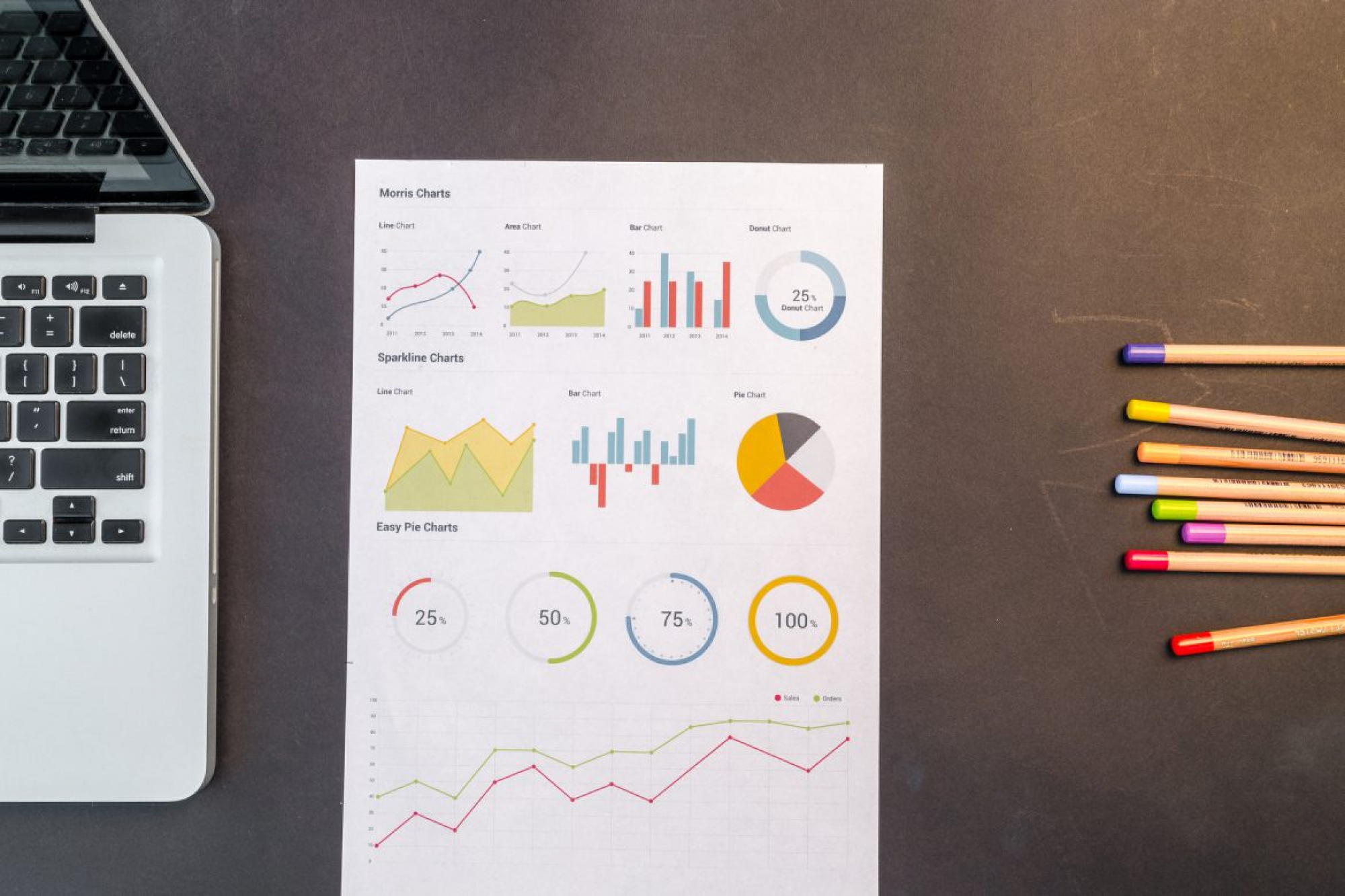 We analyzed the major public opinion polls, and came away with ten key findings:

1. Are we really European? According to June 2017 research by Ilko Kucheriv Democratic Initiatives Foundation (DIF), 38 percent of Ukrainians consider themselves Europeans, while 55 percent do not. Only 57 percent of Ukrainian citizens support the country joining the European Union, and even fewer, 43.2 percent, support joining NATO. 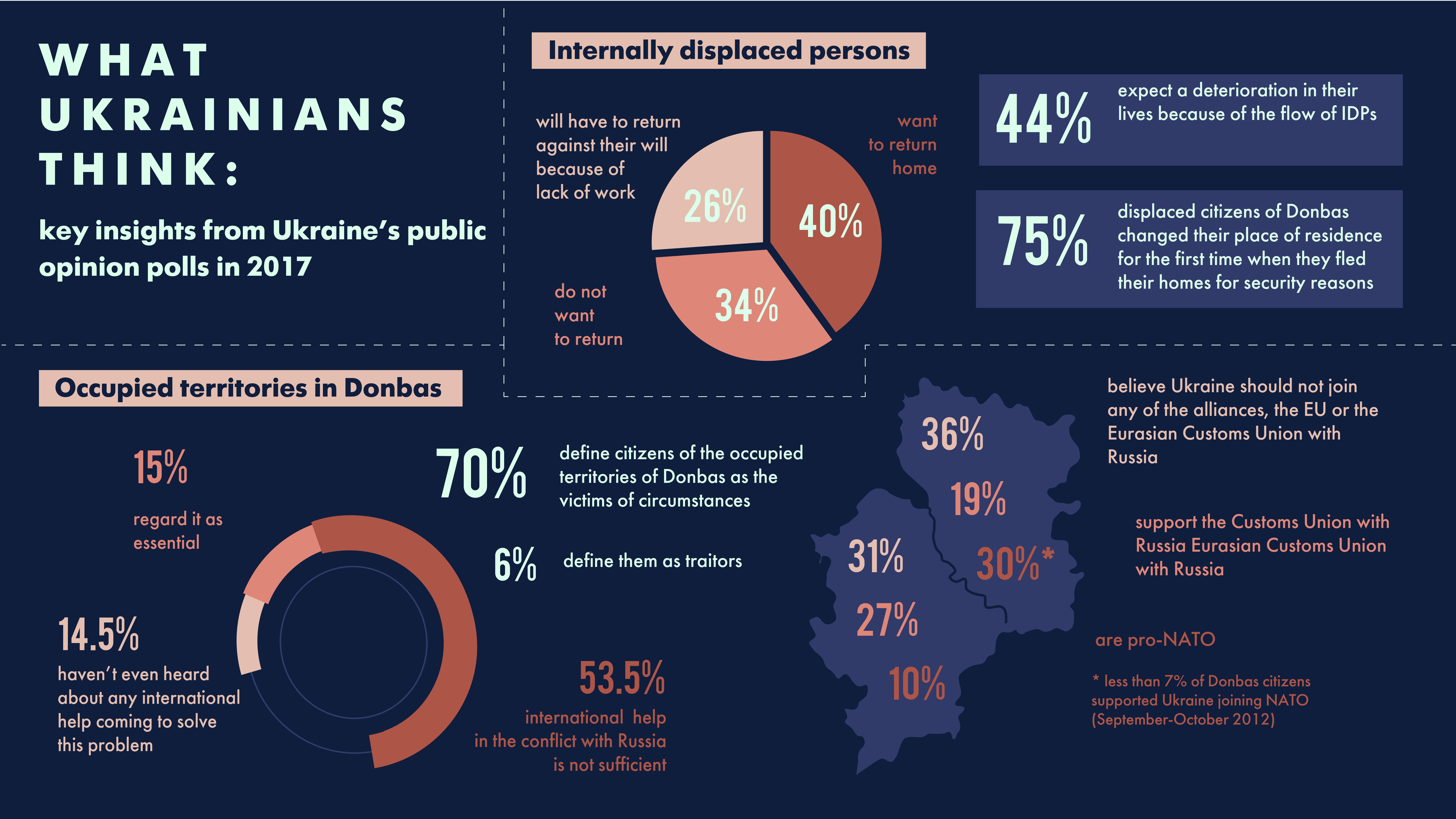 2. Ukrainians like Russians more than Russians like Ukrainians: One of the most interesting results of a December 2016 poll conducted by the Kyiv International Institute of Sociology (KIIS) is the relatively high level of Ukrainians who have a good attitude toward Russia: 40 percent, a number that hadn't changed throughout the year. According to an earlier 2016 survey by KIIS, 67 percent of Ukrainians were positive toward Russians, but only 8 percent were positive toward the Russian government. That 8 percent lay mainly in the Donbas territories, though the survey was conducted only in the government-controlled part of the region. Russians are not so positive toward Ukrainians, according to the Russian Levada Center. They rate Ukraine more negatively than almost any other nation, and listed it as one of their top three enemy countries—after the United States and before Turkey.

In contrast, according to a poll conducted by Rating Group in September-October 2012, fewer than 7 percent of Donbas citizens supported Ukraine joining NATO five years ago. Support for NATO has grown in the Donbas, but remains far below the levels seen in other Ukrainian regions. 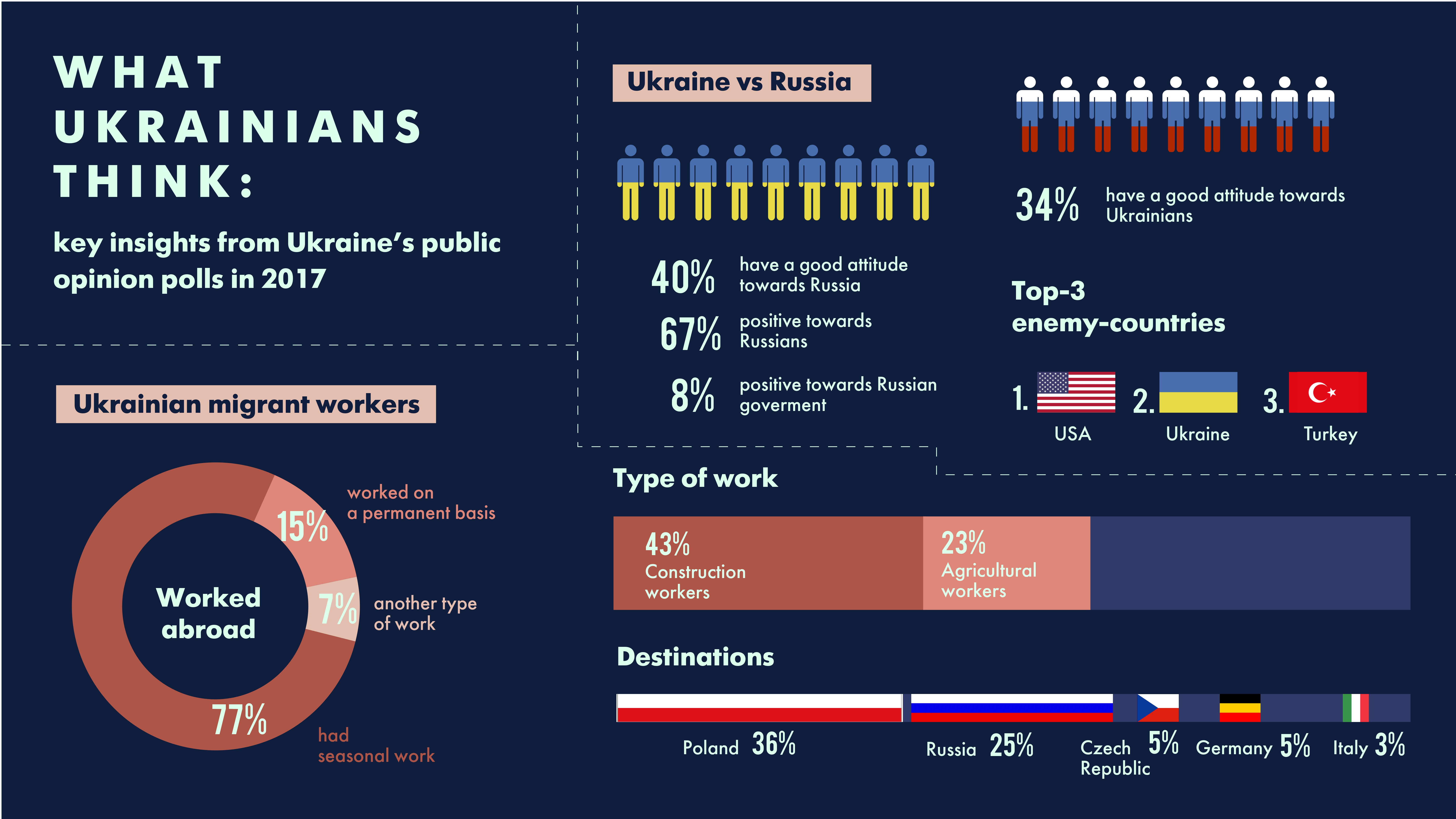 4. Half of Ukraine's internally displaced persons want to return home: According to March 2017 research conducted by KIIS, about half of the internally displaced from the Donbas wish to return home; 34 percent do not want to return, and another 26 percent think they will have to return against their will because of the lack of work. Remarkably, more than half of the respondents have stable jobs, and 35 percent of all respondents still work at the same companies they worked for before they moved. At the same time, the mood of the host communities is far from positive: 44 percent expect a deterioration in their lives because of the inflow of IDPs.

5. A majority of Ukrainian migrant workers want to live in Ukraine eventually: As of late 2016, 77 percent of Ukrainians who had worked abroad in the past five years had seasonal work, and only 15 percent worked on a permanent basis. The latter group included more female workers and those with higher education levels. Those who worked in the EU had more stable jobs than those who were working in Russia. Poland (36 percent), Russia (25 percent), the Czech Republic and Germany (5 percent each), and Italy (3 percent) are among migrants' main destinations.

According to a survey conducted by Rating Group in September 2017, 61 percent of Ukrainians do not wish to emigrate abroad for permanent residency. Thirty-five percent said they would like to, up from 30 percent last year. Those who want to migrate are mainly young people aged 18-35. Notably, 65 percent of respondents would return to Ukraine after working abroad.

6. Ukraine's visa-free status with the EU isn't well understood: According to the June 2017 DIF study, thirty-five percent of respondents know nothing about the rules of the new visa-free status for Ukraine; 50 percent say they know something but are not looking into the topic, and only 14 percent say they understand perfectly how it will work. Only 34 percent of Ukrainians have international passports, and fewer than 7 percent have new biometric ones that open up visa-free travel to the Schengen area to them.

8. Ukrainians think medical institutions, parliament, and courts are the most corrupt: 44 percent of Ukrainians rate corruption as the most serious problem in Ukraine, according to DIF research. Another 36 percent consider it a quite serious one. The most corrupt public services are seen as medical institutions (82 percent), parliament (82 percent), the courts (81 percent), government (75 percent), the prosecutor general's office (75 percent), and political parties (74 percent).

Ukrainians' main daily worries, according to the KIIS study, are the war in the east (72 percent), low living standards (60 percent), and the economic situation (47 percent). 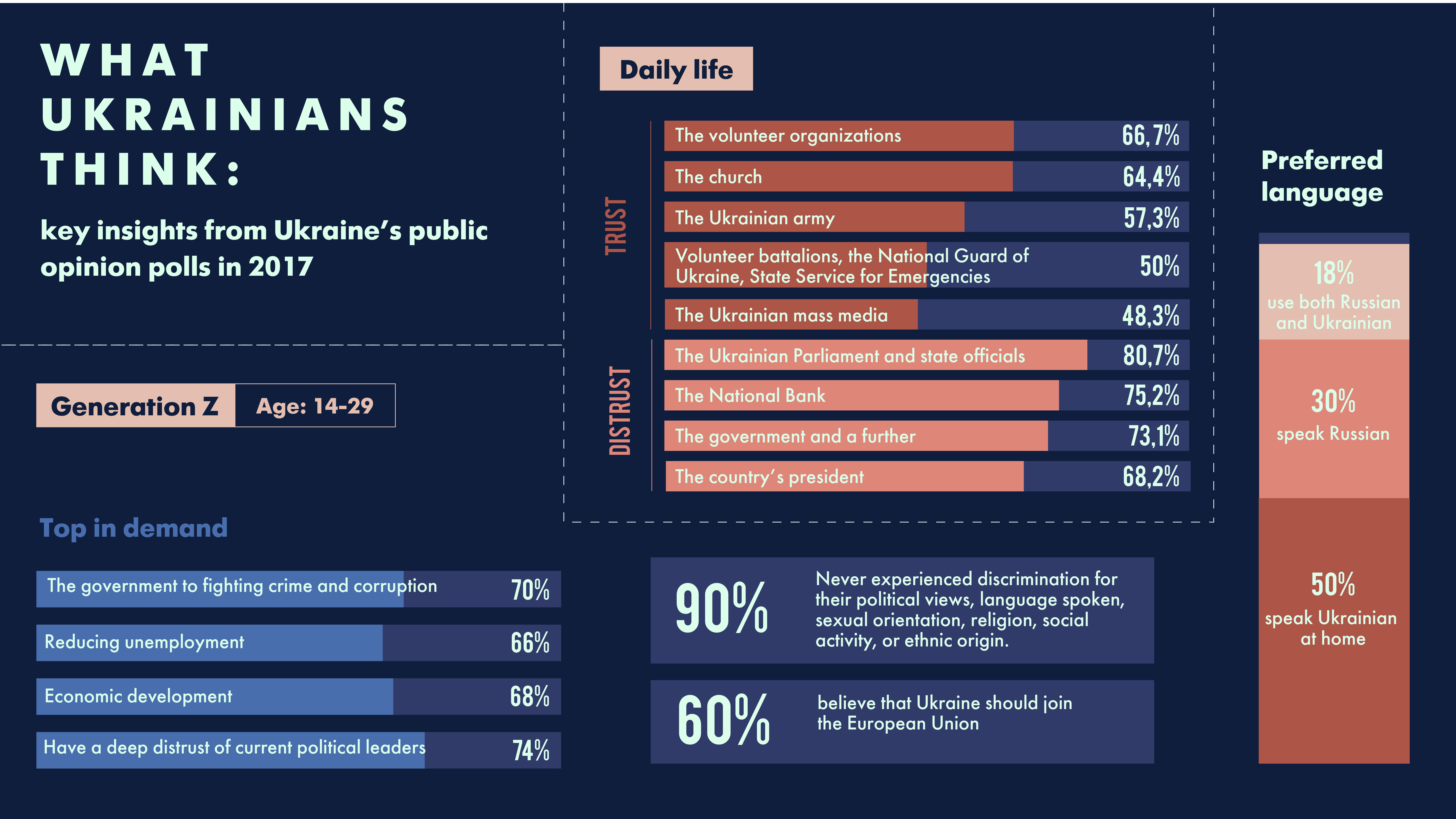 10. Ukraine's Generation Z distrusts politicians, wants the government to fight corruption, and join the EU: "Youth of Ukraine 2017," a recent nationwide poll conducted by the New Europe Center among young people ages 14-29, reveals that 74 percent of young Ukrainians have a deep distrust of political leaders. Seventy percent said their top demand for the government is to fight crime and corruption. Economic development (68 percent) and reducing unemployment (66 percent) were also at the top of the list. Ninety percent of respondents said they have never experienced discrimination for their political views, language, sexual orientation, religion, social activity, or ethnic origin. Sixty percent of respondents believe that Ukraine should join the European Union—but they also do not trust the EU, as they believe that Ukraine is not wanted in the union, and membership is regarded more as a dream than an achievable goal. The poll also shows that only 10 percent of young Ukrainians are interested in politics.

These poll results demonstrate that Ukrainian society is highly polarized. Ukrainians are often exposed to many competing narratives and it can be hard to make a decision on high politics. That being said, they all agree that reforms could have been handled better if there were less corruption in the country.

Anna Kyslytska
An analyst at Internews Ukraine and UkraineWorld
Next article

Woman With Disability Campaigns for a More Inclusive Dnipro

How do people with disabilities try to make Ukrainian cities more inclusive? Our new video submitted within a contest for regional and citizen journalists supported...