December 22, 2017
Here we will try to make sense of what 2017 brought Ukraine. Many events and trends of the past year will certainly have consequences for what the future holds for Ukraine. 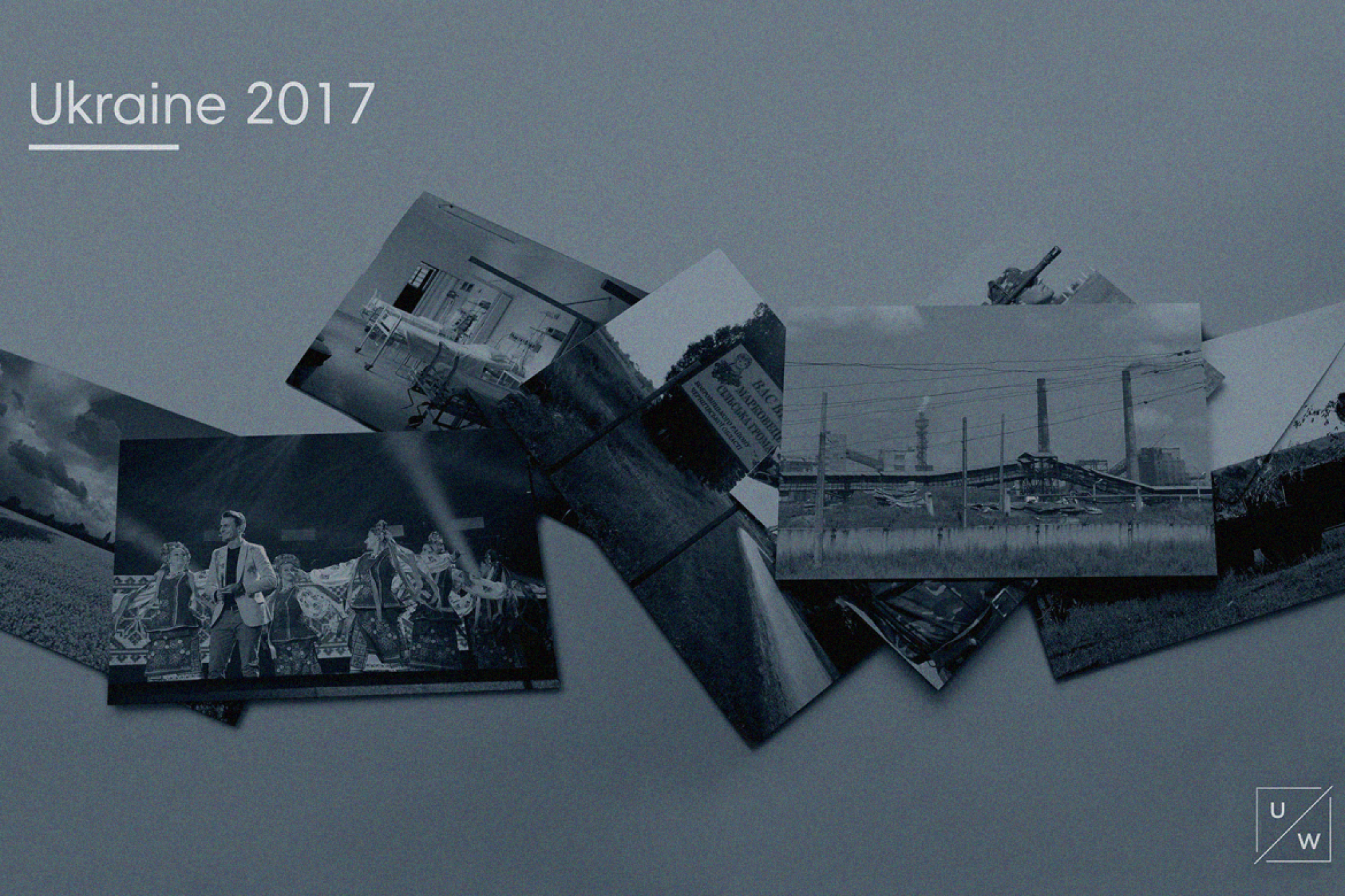 Improving some spheres of life and nurturing closer ties with the EU while rolling back some reforms and more symptoms of the state being held captive by oligarchs – this is Ukraine in 2017.

The past year Ukraine selected new judges for the Supreme Court to regain people's trust in the judiciary. Though, some do have a shady past,which could compromise the whole process.

Yet, there are no anticorruption courts to ensure independent and unbiased proceedings. The National Anti-Corruption Bureau (NABU), created back in 2015, is often the subject of political pressure when investigating high-profile graft. Furthermore, the Ukrainian Parliament and the country's president tried to grab control of appointments to anti-corruption institutions. This attempt failed thanks to pressure from the IMF, EU, and U.S and civil society.

At the end of the year, Ukrainian President Petro Poroshenko received the right to temporarily appoint members of the energy regulator, thereby taking over more powers.

Also, the draft bill called 'Buy Ukrainian', which passed its first reading, would kill ProZorro public procurement system. It provides benefits for products with local component of more than 20%. Such products would have preference over others even if their price is 43% higher.

At the same time, Ukraine continued its ambitious reform agenda. Many of its new initiatives should be implemented starting from 2018, thereby laying down the groundwork for further strengthening of the state.

Major progress can be seen in healthcare, pension, and education reforms.

One provision contained in the education law obliging secondary school pupils to study only in Ukrainian sparked an outcry from neighboring countries, particularly from Hungary. Later, the Venice Commission recognized the need to enhance the role of the country's official language. Though it recommended extending the transition period and eliminating supposed discrimination against the Russian language.

But despite some successes, many necessary structural changes are being delayed, while some achievements are being rolled back. Further pressure from civil society and international partners in coming years is vital to push against vested interests.

During the past year, the political arena of Ukraine was aggravated several times by the standoff between President Petro Poroshenko and the ex-leader of Georgia (and former Odesa Region governor) Mikheil Saakashvili. The Ukrainian authorities stripped Saakashvili of his Ukrainian citizenship and accused him of receiving illicit funding from a fugitive Ukrainian businessman, also an associate of the ousted pro-Russian president Viktor Yanukovych. Saakashvili, in turn, organized protests and called for the impeachment of President Poroshenko.

This entire story compromised Ukraine on the international arena.

In summer, the EU permitted Ukrainians to stay visa-free in the countries of the Schengen area for 90 days within any 180-day-period.

There was no breakthrough on issue of Russia's annexation of Crimea and support of separatists in Ukraine's Donbas. Despite Minsk agreements and ceasefires, agreed from time to time, clashes and skirmishes continue. From January to September 2017, there were 500 casualties among civilians, estimates of OCHA. As of October 24, in 2017, 284 combatants of Ukrainian armed forces were killed, estimates of Remembrance Book.

But some developments may have an impact in years to come.

In March, Ukraine blocked railway and road routes with the occupied part of Donbas. Initially, the blockade was organized by Ukrainian paramilitary groups demanding the release of Ukrainian hostages by the separatists. The Government was initially critical of these developments. It decided in favor of the official blockade after the separatists had seized all the large companies, and the Government effectively lost its major coal suppliers.

The effect of this move was nonetheless ambivalent. Illicit trade is flourishing between Government-controlled and non-Government controlled territories; and the separatists also receive goods from Russia. Many Ukrainian enterprises had to reduce their working capacity as they were dependent on coal from the self-proclaimed republics.

In addition, Ukraine drafted a law on the Donbas region's reintegration. For the first time on a legislative level Kyiv was going to name Russia as the aggressor in the conflict and the situation in the east of Ukraine as armed aggression. The draft law also allows the armed forces to manage operations in Donbas, instead of the Security Service of Ukraine. There are doubts, however, that the law can pass the final reading. Today Ukraine continues to live under the legal basis provided by the Minsk agreements, including the law on "the special status" of Donbas stipulated by the Minsk deals (signed in September 2015).

Russia proposed a UN support mission in Donbas but only on the contact line. Ukraine, however, is insisting on a broader peacekeeping mission on the whole occupied territory of Donbas and with the access to the border with Russia.

In 2017, Crimea found itself not only in Ukrainian but also international news. In summer, four Siemens' gas turbines were illegally delivered to Kremlin-occupied Crimea in violation of EU sanctions. Siemens launched a lawsuit against TechnoPromExport, the Russian company that bought the turbines, for breach of contract. EU extended sanctions against Russia but no actions against Siemens.

Also, in October, Russia released Deputy Chairs of the Mejlis , Akhtem Chyigoz and Ilmi Umerov. As the Haberturk TV channel informs, they were exchanged for two Russian agents detained by Turkey.

Assassinations and/or terrorist acts shook Ukraine several times in 2017. Among them, there are Timur Makhauri who fought with other ethnic Chechens on the Ukrainian side in the conflict against Russia-backed separatists; Yuriy Vozniy, Ukraine's security service colonel; Maksym Shapoval, who served in an elite Defense Ministry intelligence unit; Amina Okuyeva and Adam Osmayev (only Adam survived), ethnic Chechen volunteers fighting on Ukrainian side; Oleksandr Kharaberyush, lieutenant colonel and deputy chief of the Donetsk region counterintelligence department for the security service; Denis​eVoronenkov, a former Russian lawmaker who fled to Ukraine.

Nobody knows for sure who is behind the attacks. Many suspect Russia, since the victims were mainly opponents and critics of the Kremlin, though in some cases, domestic wrangling may well be the issue.

Ukraine finds itself more and more often the victim of a huge cyber attack. In October, a virus attacked the Kyiv metro and Odesa airport. Earlier, the WannaCry virus went around the world hitting Ukraine heavily. It froze the work of computers and demanded a ransom.

But the biggest attack was in June. The so-called Petya malware swamped Ukrainian ministries, banks, newspapers and the transport infrastructure. The aim was to discover how large companies and the Government operate.

Kyiv made a significant attempt to reduce the Kremlin's virtual dominance in 2017.

In May, Ukraine sanctioned many Russian online services, including VKontakte and Odnoklassniki (social media), Yandex (search engine), and Mail.ru (mail service). They were very popular among Ukrainians. So Ukrainian society had mixed feelings about the decision.

As a result, the number of Russian Internet users in Ukraine fell sharply. But many are still active users thanks to VPN and anonymizers.

Eurovision in times of war

This past year Ukraine hosted the Eurovision Song Contest. At this time of war, Ukraine was trying to show 'life is almost as usual', according to the Ukrainian novelist Andriy Kurkov. It demonstrated the ability to do things 'at a European level', admits The Irish Times, quoting a young woman by the name of Alena Matkovsky.

2017 was a tough and ambivalent year for Ukraine. Positive changes went hand in hand with challenges coming from the war in the east, reform rollbacks, and resistance, or even offence, from the old system. The truth is that a path has no start or end. Past actions have ramifications for the future.

In our new episode of the “Explaining Ukraine” podcast, we analyze how Russia is using disinformation, misinformation, and propaganda to support its actions against...
VIDEO
March 5, 2021