February 15, 2018
Over the last few centuries, Ukraine has often served as a borderland for empires, and a country where different cultures met and enriched each other. 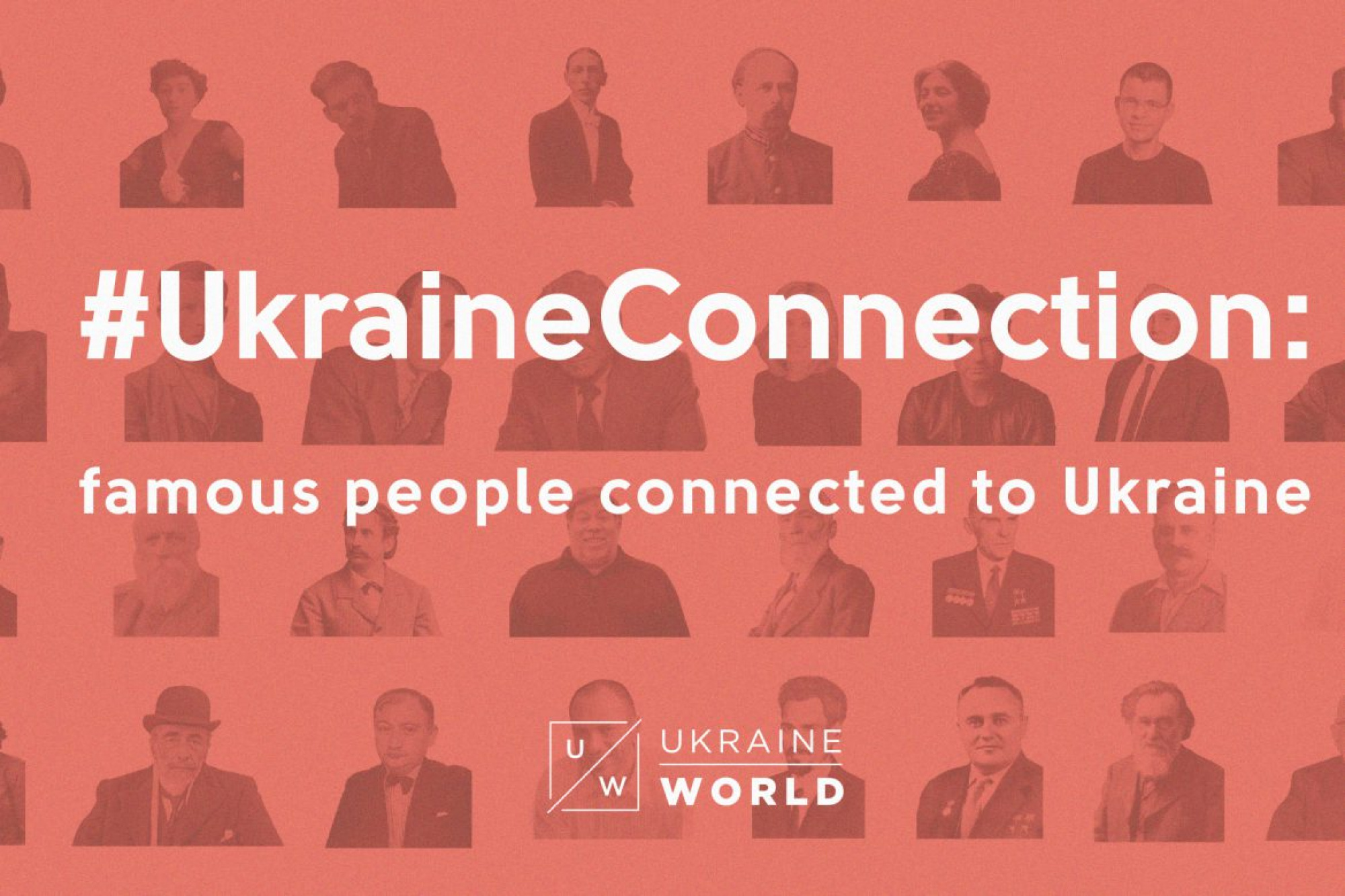 Ukrainians, Russians, Poles, Jews, Greeks, Romanians, Georgians, Armenians, Germans, Austrians, and people from many other ethnic backgrounds were born here, studied or worked here, or had parents who were born in Ukraine.

Ukrainian cultural heritage is far from being monoethnic and monolingual. #UkraineConnection, which is an overview of famous people linked to Ukraine, is an attempt to reflect this multi-cultural heritage.

It is an attempt to bear in mind that one of the biggest 20th century German-speaking poets was born in Chernivtsi, that one of the biggest 20th century British novelists was born near Berdychiv, that the person who invented the concept of "genocide" studied in Lviv, that an economist who invented the concept of Gross Domestic Product (GDP) lived in Rivne and Kharkiv, that a doctor who accomplished the first organ transplant was born near Poltava and the father of contemporary astronautics was born in Zhytomyr.

Let's do a very brief overview of some of these people.

Kazimir Malevich , prominent avant-garde painter of XX century. Malevich is the founder of new waves in non-figurative art called Cubo-Futurism and Suprematism. He was born in 1878 in Kyiv to a Polish family. Up till the early 1900s he lived in many Ukrainian cities, including Kyiv, Kharkiv, Chernihiv Regions.

Oleksandra Exter (1882 – 1949), a Ukrainian painter, one of the prominent representatives of the Cubism and Futurism art movements in Europe. Lived and worked in Kyiv, where she created her paintings and drawings, later emigrated to Paris.

Oleksandr Arkhypenko , famous avant-garde artist and sculptor. Born in Kyiv to a Ukrainian family in 1887, Arkhypenko held numerous exhibitions in Europe and the USA until he died in New York in 1964.

Serhiy Paradzhanov (1924 – 1990), film director of Armenian descent. The bulk of his creative work and personal life relates to Ukraine, where he directed a number of films. "Shadows of Forgotten Ancestors", a film based on the eponymous novel written by famous Ukrainian writer Mykhaylo Kotsiubynskiy, made Paradzhanov a celebrity. His second wife was Ukrainian, and his son still lives in Kyiv.

Oleksandr Dovzhenko (1894 – 1956), a famous Ukrainian film producer, director and writer. Born in Chernihiv Region, Dovzhenko worked a lot in other Ukrainian cities, namely Odesa, Kharkiv. His film "Earth" was included in the list of the 12 best movies in cinema history.

Ihor Stravinskiy , a famous composer, one of the most prominent representatives of the world's music culture of the XX century. His parents, both singers, came from Ukraine: his father was born in Chernihiv Region, while his mother in Kyiv.

Mykola Leontovych , a Ukrainian composer who is known for the "Shchedryk" folk chant, which was later rearranged into the "Carol of the Bells", one of the most popular Christmas songs. He was born in the Podillia area in 1877 to a Ukrainian family.

Watch and listen to Leontovych's "Shchedryk", the original Ukrainian version of "Carol of the Bells"

George Gershwin (1887 – 1964), an American pianist and composer. His works – Rhapsody in Blue, An American in Paris, among others, – enjoyed great success among the public, with many of them being used in films. Born in the USA, Gershwin was the son of a Ukrainian-Jewish family which emigrated from Odesa.

Leonard Bernstein , an American pianist, composer, conductor. Born in the United States in 1918, to a family of Ukrainian-Jewish emigrants who moved to the USA from Rivne Region before World War I.

Watch and listen to Bernstein conducting and playing the piano in a performance of Gershwin's Rhapsody in Blue, New York, 1976 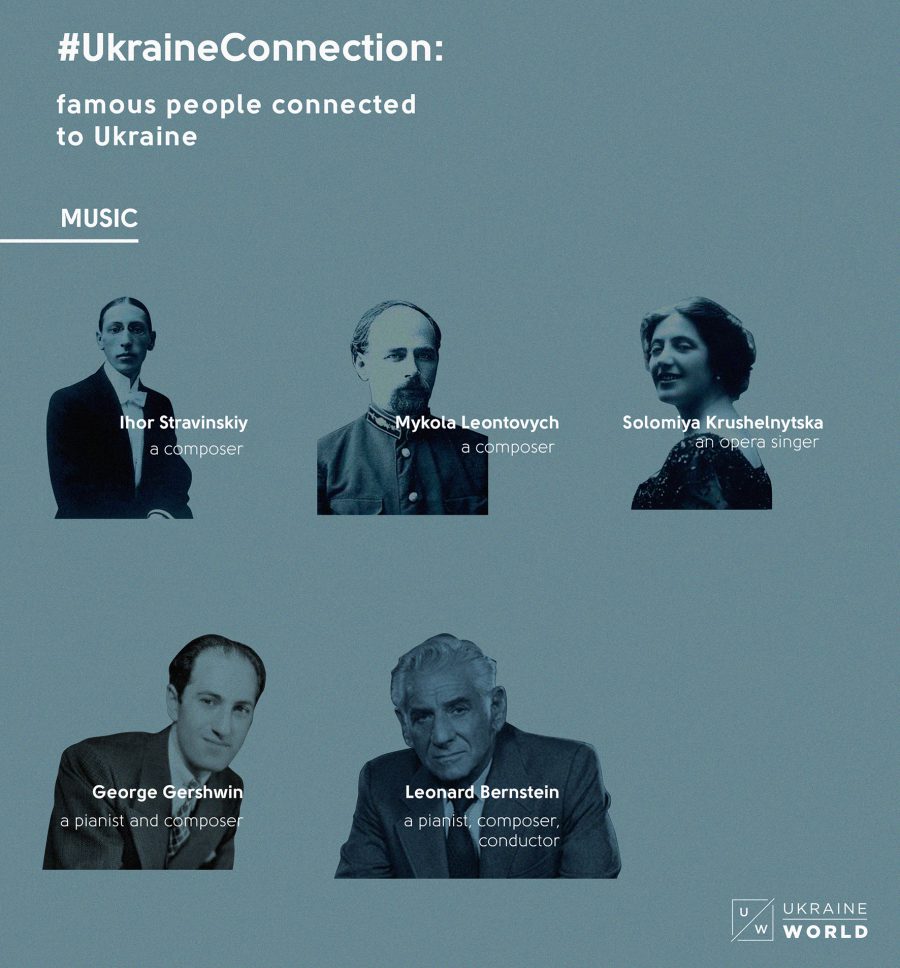 Paul Celan , one of the most prominent German-language poets of the post-World War II era. Born in Chernivtsi (Czernowitz) in 1920 to a Jewish family.

Martin Buber (1878 – 1965), a famous Jewish religious philosopher and first president of the Israel Academy of Sciences and Humanities. Born to a family of Lviv-based Jewish book publishers; raised and lived in Lviv.

Leopold Ritter Sacher-Masoch , a prominent Austrian writer and novelist. In his novels and stories, Sacher-Masoch focused a lot on his homeland, Galicia. The term "masochism" was coined by Austrian psychiatrist Kraft-Ebing based on his work (specifically Venus in Furs) but his texts and topics have much wider significance. Born in Lviv in 1836.

Svetlana Alexievich , a writer, essayist and journalist, 2015 Nobel Prize in Literature winner. Born in Ivano-Frankivsk in 1948, her father was Belarusian and mother Ukrainian.

Joseph Conrad , prominent British writer of XIX-XX centuries of Polish origin. Author of the famous "Heart of Darkness" (which later became the basis for the plot of Coppola's "Apocalypse Now") and many other famous novels and short stories. Born in Berdychiv in 1857 to a Polish family.

Joseph Roth (1894 – 1939), an Austrian journalist and writer of Ukrainian-Jewish descent, known for numerous novels (including the famous Radetzky March, 1932) and shorter texts. Roth was born and raised in the small city of Brody, near Lviv. 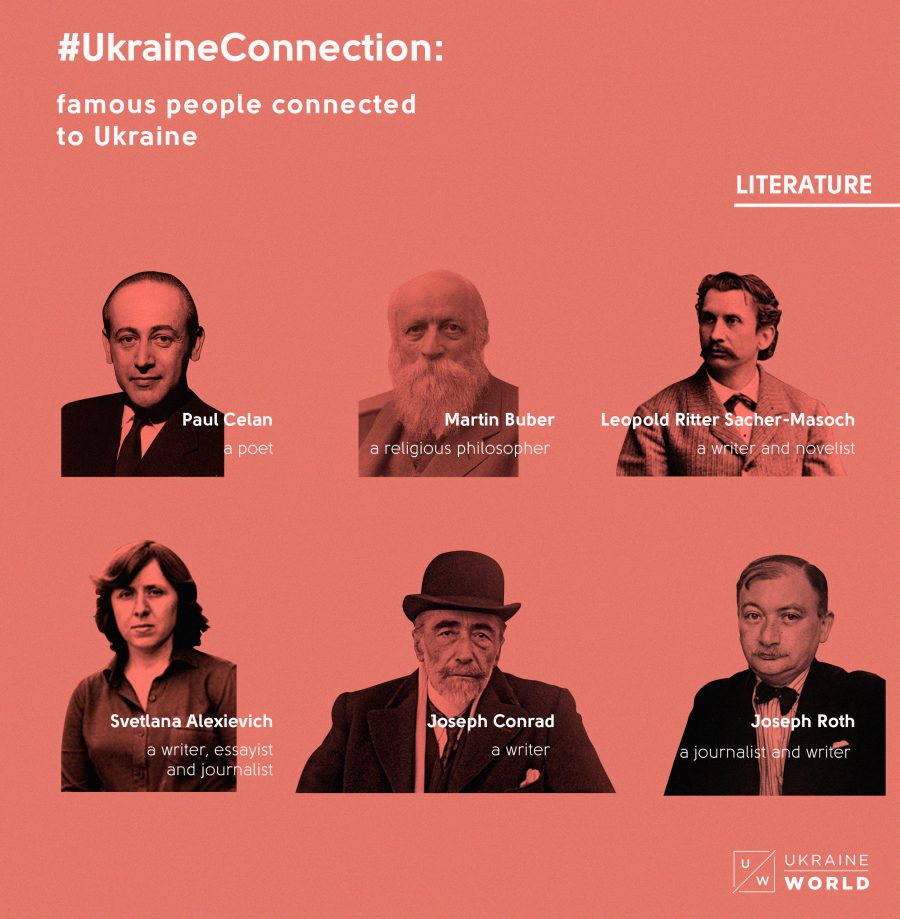 Milla Jovovich , a famous Hollywood actress, model and singer. Born in 1975 in Kyiv to a Russian-Serbian family.

Vira Farmiga , a well-known American actress and director of Ukrainian descent. Born 1973 to a Ukrainian family that emigrated to the USA, Farmiga did not learn English until she was 6 years of age. She attending Ukrainian Greek Catholic Church and was a member of Plast, one of the largest Ukrainian scouting organizations.

David Duchovny , a modern American actor of Ukrainian descent, best known for his parts in two TV series, The X-Files and Californication. Duchovny's grandfather emigrated to the USA from Berdychiv. In 2014, Duchovny wrote in his Twitter feed: "I grew up thinking I was Russian only to find recently I have been Ukrainian all along." 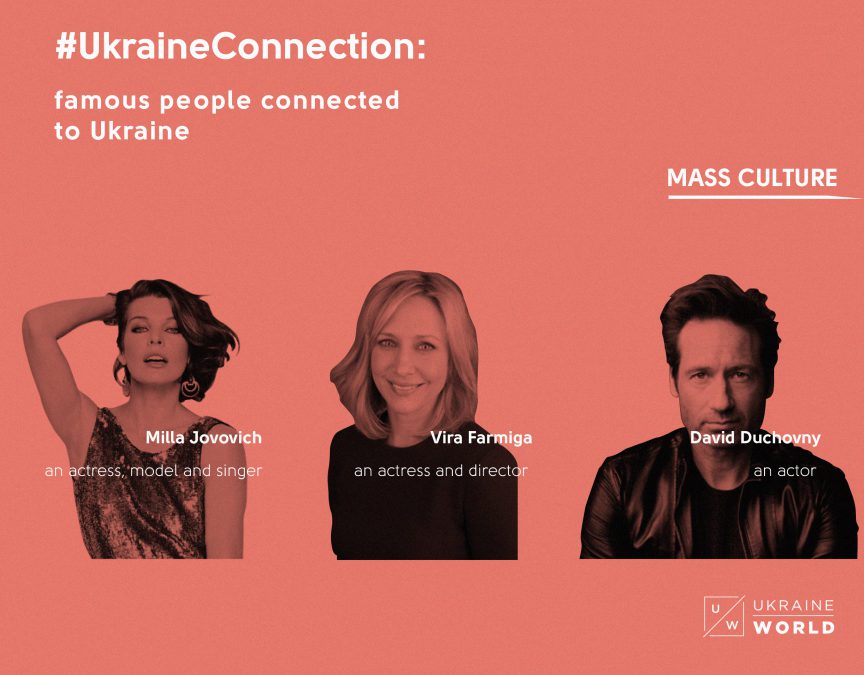 Steve Wozniak , an inventor and pioneer in the sphere of computer technologies, a co-founder of Apple Inc. Called himself ethnic Ukrainian on numerous occasions.

Ivan Puliuy , a famous physicist and inventor, who is believed to be early developer of the use of X-rays for medical purposes. Born in Ternopil in 1845, Puliuy is also known for his active support and promotion of Ukrainian culture.

Oleksandr Morozov , a construction engineer, one of the designers of the T-34 tank, acknowledged to be the best tank in World War II. Born in Russia, Morozov lived and worked in Kharkiv, where he died in the late 1970s.

Yuriy Kondratyuk (1897 – 1942), a prominent scientist and engineer, a pioneer of astronautics and space exploration. Kondratyuk's space-related research work was used during the planning of the moon landing by American astronauts. One of the moon's craters is named after this Poltava-born scientist.

Serhiy Korolyov , prominent rocket engineer, father of practical astronautics. Koroliov was involved in the development of the first artificial Earth satellite, as well as the first human space flight, among other projects. Born in 1906 in Zhytomyr to Ukrainian-Belarusian parents.

Jan Koum , co-founder of WhatsApp and executive director of Facebook. Born in 1976 in Kyiv to a Ukrainian-Jewish family.

Max Levchin , a USA-based entrepreneur, scientist and one of the co-founders of PayPal international payment system. Born in 1974 in Kyiv, Levchin moved to the USA at the age of 16. 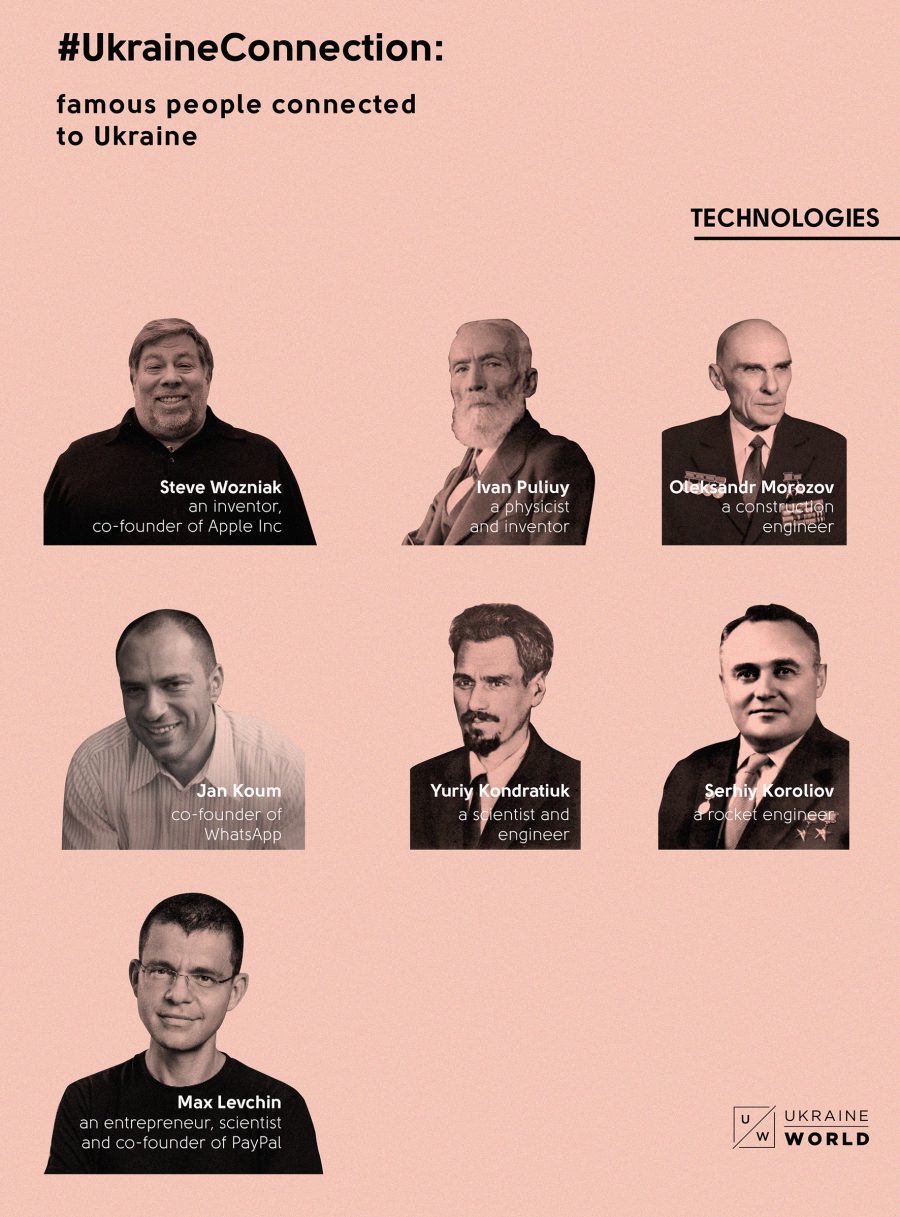 Yuriy Voroniy , a doctor and surgeon, holder of a post-doctoral degree in medicine, he was born in a village in Poltava Region. Voroniy conducted the first ever human kidney transplantation in 1933, when he transplanted a dead man's kidney to a woman.

Mykola Amosov , a doctor and heart surgeon, scientist and best-selling author, known for his invention of numerous surgery treatments of various heart illnesses. He lived and worked in Kyiv for 49 years, where he died in 2002.

Mykola Hamaliya , world-renowned microbiologist and epidemiologist. Hamaliya launched the Bacteriological Station in 1886 in Odesa, and vaccinations of human beings against rabies were carried out for the first time in the Russian Empire.

Ilya Mechnikov , a famous biologist, pathologist and immunologist, winner, alongside Paul Ehrlich, of the 1908 Nobel Prize in Physiology or Medicine as an acknowledgement of his contribution to immunology issues. Born in a village in Kharkiv Region in 1845.

Selman Waksman , famous biochemist and microbiologist who triggered the discovery and development of many antibiotics. In 1952, Waksman was awarded the Nobel Prize for his contribution to the discovery of antibiotic against tuberculosis. Born in 1888 near Vinnytsia to Jewish parents. 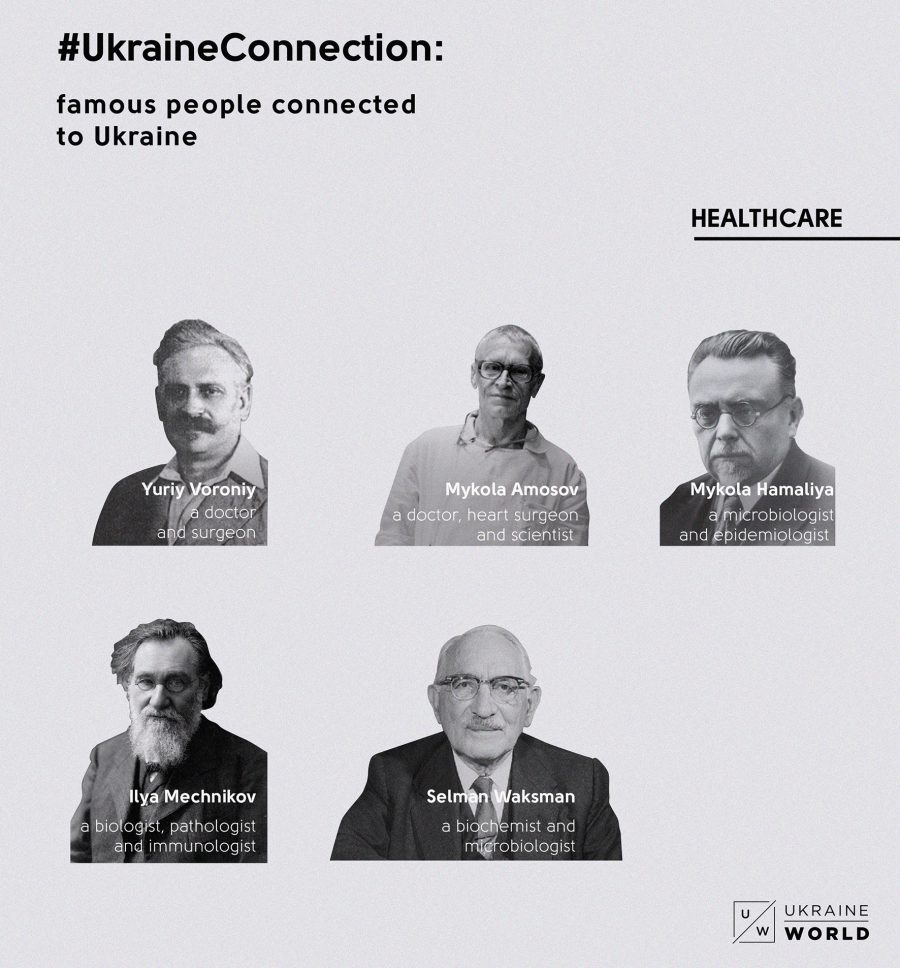 Vladyslav Horodetskiy , a world famous architect, who designed, among others, Saint Nicholas Roman Catholic Cathedral and Chimeras House in Kyiv. Born in Vinnytsia Region to a Polish family in 1863, Horodetskiy, also named the "Kyiv Gaudí", lived and worked in Kyiv for almost 30 years.

Anne de Kyiv , the queen consort of Henry I of France and queen of France (1051 – 1060), founded Saint Vincent Abbey in Senlis. She was the daughter of Yaroslav the Wise, Grand Prince of Kyiv and Prince of Novgorod.

Raphael Lemkin (1900 – 1959), Polish and American lawyer and scientist of Jewish descent, best known for coining the word "genocide" and initiating the Genocide Convention. Lemkin was the first scientist to determine the Stalin-ruled communist regime's policy against Ukrainians as genocide and analyzed the Holodomor in Ukraine in the context of international law. 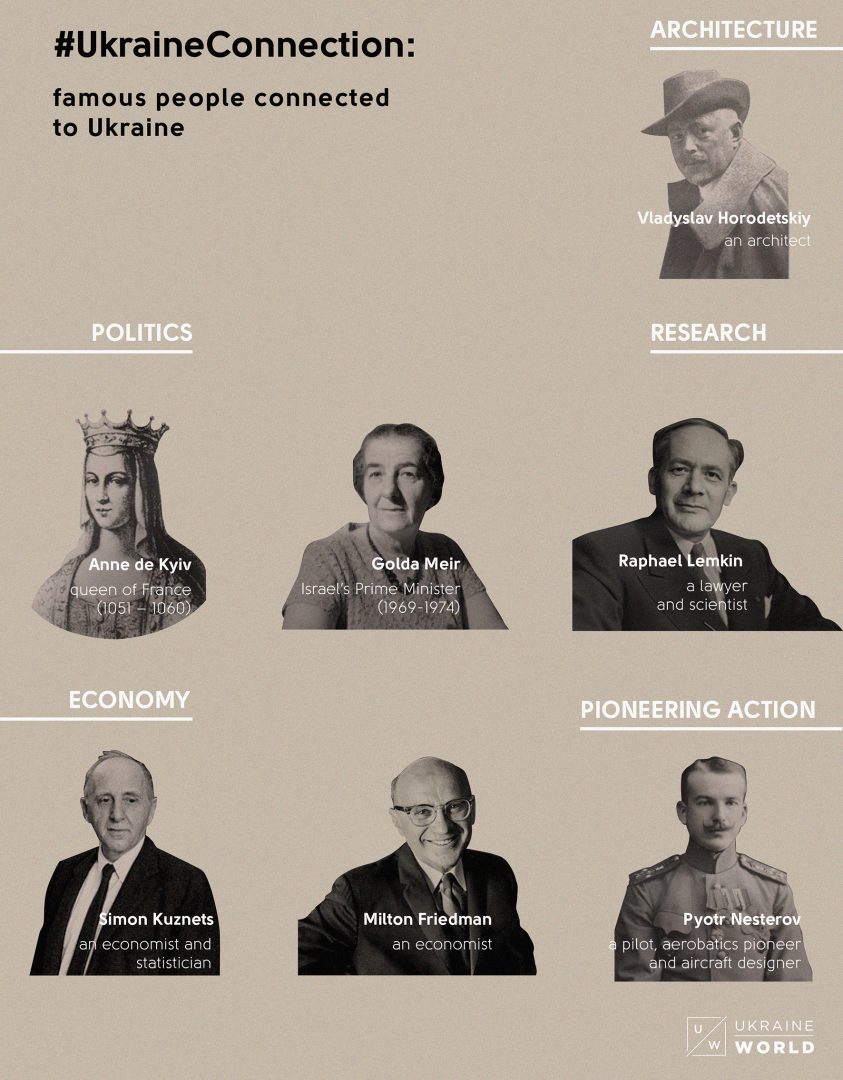 Simon Kuznets , a famous economist and statistician, described as "the father of GDP", the winner of the 1971 Nobel Prize in Economic Sciences. Before he emigrated to the USA, Kuznets lived in Rivne and studied in Kharkiv.

Milton Friedman , a world-famous American economist, winner of the 1976 Nobel Memorial Prize in Economic Sciences for research on consumption analysis, monetary history and theory, and the demonstration of the complexity of stabilization policy. Born in the USA in 1912 to Jewish parents that emigrated from the city of Berehove, Zakarpattia Region.

Pyotr Nesterov , a pilot, aerobatics pioneer and aircraft designer. In 1913, Nesterov performed the so-called "dead loop" over Syrets aerodrome in Kyiv, where he lived and worked. He was the first person in the world to perform the loop. Died in Lviv Region, and is buried at Lukianivske cemetery in Kyiv.

Kostiantyn Romashko
An analyst at Internews Ukraine and UkraineWorld
Next article

How much of one’s life can fit into a suitcase? This is the question that around 1.5 million Ukrainian IDPs have dealt with. Thanks to the support of the Black Sea...
PODCAST
September 29, 2020