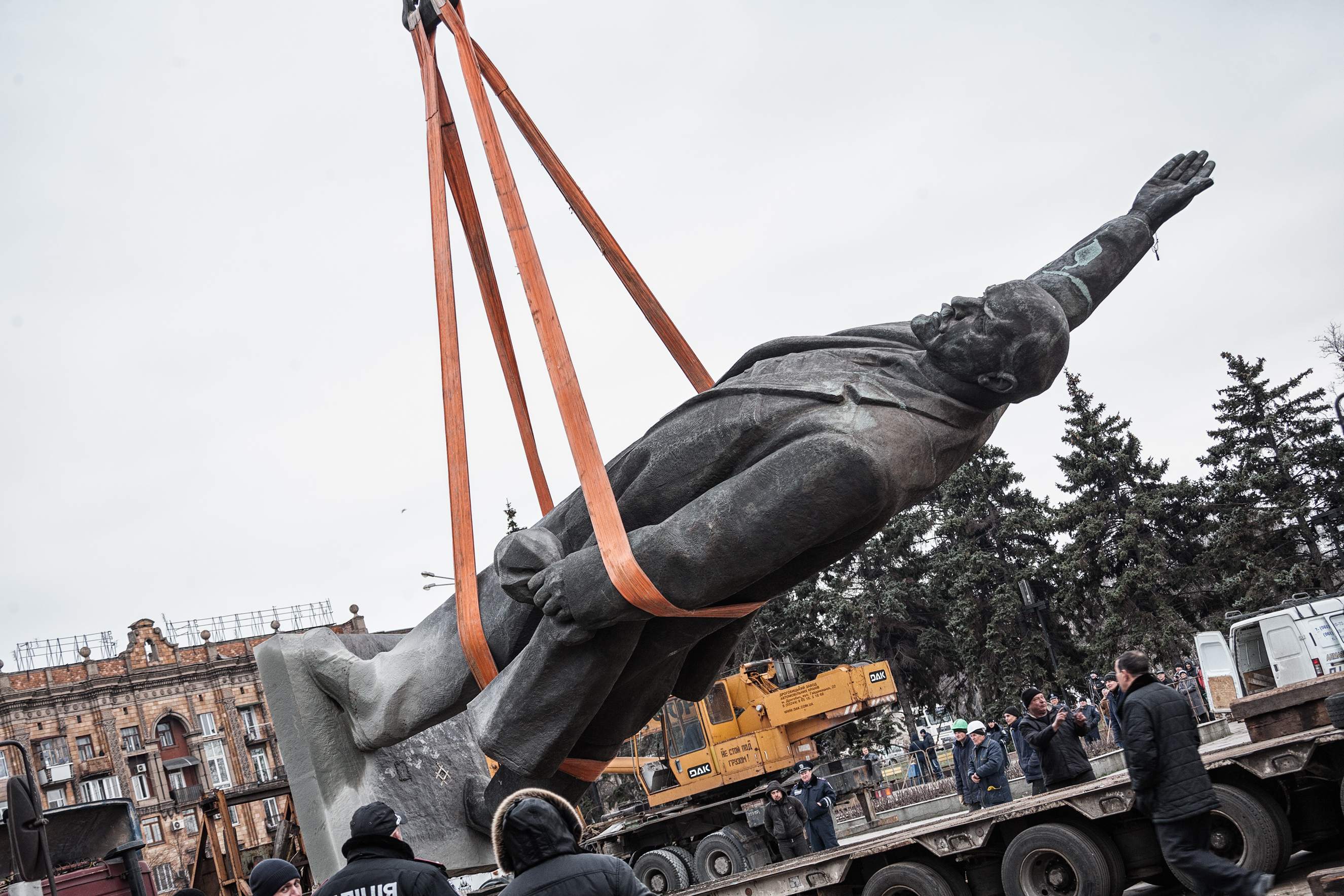 February 22, 2018, and the eastern Ukrainian city of Kryvyi Rih, a huge metallurgical center and President Zelensky's hometown, celebrates the 74th anniversary of its liberation from Nazi occupation. It's quite a typical event for post-Soviet space - laying of flowers at memorials, official speeches by local political beau monde and a ceremonial parade that usually closes such celebrations. However, this time such a routine event was remembered by the one fact which provoked lively discussion on social networks - the Ukrainian National Guard paraded in the city center with red flags and Soviet symbols -- a hammer and sickle with the inscription - "For our Soviet Motherland". The local National Guard chief later faced sanctions for his actions. However, this event showed that in some regions of Ukraine de-communization laws are still not taken seriously, even by law-enforcement agencies.

Three years before that former President Poroshenko signed the so-called "de-communization" package of laws later adopted by Parliament, the main objective of which was banning the promotion of symbols of Communist and National-Socialist totalitarian regimes. Despite all the laws that were signed, Ukrainians still need a lot of time and effort to rethink their past and the symbols that represented it.

"Old habits die hard"; changes in human mentality are a long-run perspective. De-communization in Ukraine was aimed by its authors at accelerating the process of moving away from the totalitarian Soviet past. It was inspired, on the one hand, by the example of neighboring countries (Poland, Baltic States, etc.), and, on the other hand, it was made possible by the Revolution of Dignity and the beginning of the war in the east of Ukraine. These events had actually launched the process of de-communization before its official introduction in 2015.

Ukrainian de-communization is obviously moving in the opposite direction and is carried out in a centralized way. Because of this, it remains a very ambiguous phenomenon in Ukrainian society. Ukrainian de-communization, which declares its struggle against the totalitarian heritage of the Soviet Union, in some moments also acquires a trait of centralism and unilateralism that gives rise to a "black and white" perception of history, where all Soviet a priori is considered as an evil.

UkraineWorld has already written about the interim results of de-communization in the context of the demolition of monuments to Communist leaders, the renaming of streets and settlements, as well as changes, or the abolition of holidays associated with the Soviet past.

From the very beginning, a powerful debate broke out among Ukrainian intellectuals about the necessity and nature of the process of de-communization in Ukraine.  Ukrainian public discourse maneuvers between Scylla of accusing opponents of de-communization of "insufficient patriotism" and Charybdis of accusation of glorifying nationalism or even fascism. According to Volodymyr Viatrovych, the current head of the Ukrainian Institute of National Remembrance and one of the key authors of the above-mentioned laws, "the Communist past is one of the important tools that Russia has used and will use again." So, de-communization, "in addition to restoring justice to the victims of the Communist totalitarian regime, has another important mission and task - the fewer carriers of Soviet consciousness that there are in Ukraine, the less will be the danger of Russian aggression," - Viatrovych told Ukrinform.

Most critics of de-communization point out that the process of renaming and getting rid of Soviet heritage is chaotic, hasty and unprofessional. Nevertheless, the most criticized and ambiguous is the law about honoring the memory of the fighters for independence of Ukraine in the 20th century.  Many public intellectuals and scholars blamed Viatrovych and the UINR for an ideological approach where instead of Soviet ideological markers, the UINR is trying to implement the narrow and controversial national-state or even nationalistic view of Ukrainian history related to the glorification of political or military groups such as the Organization of Ukrainian Nationalists and the Ukrainian Insurgent Army. For example, Ukrainian historian Georgiy Kasianov, probably the most fierce critic of de-communization laws, has repeatedly reiterated that de-communization in Ukraine is carried out using Soviet methods, without discussion in society, when one version of the past is imposed on society as a single rule (see Kasianov's interview with Ukraiinska Pravda).

Vasyl Rasevych, senior researcher at the Institute of Ukrainian Studies in Lviv also criticizes Ukrainian historical politics, since he believes that "de-communization resulted in a purely formal process - renaming of streets and replacing some monuments with others. This is just a new ideological stage - some people in military uniform, let's say Vatutin (Soviet military commander during WWII) - gave way to others, also in military uniform - Shukhevych (military leader of Ukrainian Insurgent Army), for example. This will happen every time with a change of power and a historical paradigm", Rasevych told Lenta.ua.

Yaroslav Hrytsak, professor at the Ukrainian Catholic University, told hromadske radio that "History is treated not by memory, but by political reforms. For us, the most important are political and economic reforms. Even primarily political. What does de-communization do? It creates the illusion that history can be overcome by healing historical memory".

The most heated discussions on de-communization were observed during 2015-2016 at the moment of adoption of laws and their intensive implementation. About a dozen scholars discussed various aspects of de-communization on the intellectual platform "Krytyka". Besides, these laws were harshly criticized by left-wing media outlets like "Commons" or "The Political Critique". Overall, the intensity of discussions on de-communization varies greatly and often depends on resonant or scandalous cases.   For example, the recent case on demolition of a monument to Soviet marshal Georgy Zhukov in Kharkiv.

The question of the fate of de-communization has emerged recently with renewed vigor after the presidential and parliamentary elections. Ukraine's political vertical has changed radically, but it's too early to say now how the new government will cope with such a resonant and ambiguous initiative as de-communization.

President Zelensky has so far not made any specific and comprehensive statements on de-communization and UINR. During the election campaign and the first months of his presidency, he discreetly reported his support for de-communization. At the same time, he restrainedly stated that Ukrainians should call their streets and cities the names of common and modern heroes and not overuse the names of Bandera or Shevchenko. Meanwhile, Dmytro Razumkov, the chairman of the presidential "Servant of the People" party, said a month ago to Interfax-Ukraine that "the issue of de-communization should be decided at local referendum, and local communities themselves should decide on the renaming of their streets or settlements". It is understandable that at the beginning of his presidency Zelensky will take the utmost care in the field of cultural and memory policy. A significant number of Ukrainians (at least 48% - according to the poll of the sociological company "Rating" in 2016) support the de-communization and activities of the UINR. On the other hand, it is likely that the current head of the UNIR will be dismissed as the head of this entity, and another person, with more neutral views, will take his place. Viatrovych repeatedly criticized Zelensky and his political team in public for silence and concealment of problems, including in the field of cultural and memory policy: "We understand that Zelensky became president thanks to silence: he did not answer key questions. Journalists barely pulled out from him that he was allegedly not against decommunization. They hardly extracted from him that Bandera was a hero for him," Viatrovych told  censor.net.

Compared to Poland, Estonia and the Czech Republic, where the process of de-communization was closely tied to political and economic reforms and the fight against corruption, the Ukrainian case of de-communization looks very specific. Unfortunately, we have so far not been able to connect a clear cultural policy with institutional reforms. The whole process of de-communization finds itself at the crossroads - it can no longer be rolled back, since much has already been done and, on the other hand, it is not clear which direction it will be taken by the new government, or whether it will take place at all.

The renaming of streets and settlements is the most characteristic feature of de-communization in Ukraine. The results are clearly visible to the naked eye. In a purely visual sense, de-communization in Ukraine has won. The voice of skeptics in Ukraine and abroad is very audible, but in the process of renaming, there is more than just redesignation of objects. By naming the streets of our cities, government and society create a cultural space, a space of memory (lieu de mémoire). We capture our existence and differentiate our ideas, principles and goals. The names of our topographic objects tell us who we are and where we are heading. According to George Steiner, "Europe is a place of memory, it is a network of memories." The space around us, as well as its designation, is an echo chamber of historical, artistic and scientific achievements and, at the same time, a reminder of terrible and dark times.

The above-mentioned Russian version of de-communization was very quickly turned into re-communization, and this is an ontological difference that distinguishes Russian historical policies from Ukrainian ones today.

While Russian re-communization supporters exalt the "grandeur" of the USSR - especially in the context of World War II and the role of the USSR in the victory over Nazism, the Ukrainian de-communization narrative, like the Polish or Baltic ones, is ultimately aimed primarily at rehabilitating and recognizing the victims of the Soviet regime.

An important element of the Ukrainian de-communization process, often omitted in the debates around it, is that it allowed the opening of NKVD-KGB archives that had been previously classified.

Renaming streets and cities or opening archives is only the beginning of the path, because the structure of the human mentality changes very slowly. The Soviet Union collapsed, but continues to live in our heads, while renewal takes time and effort.

With VK, a Russian social network, finding itself the subject of sanctions in Ukraine, its pro-Russian users are flooding Ukraine-related discussions with hate speech.
VIDEO
June 21, 2019

HBO mini-series Chernobyl accurately replicates Soviet life of 1986. While many locations shown on the series are real, they do not always look the same. Our journalist...