November 3, 2020
Social media continues to be one of the main sources of information in Ukraine, and it is actively used by many political forces. Parties and individual politicians create public pages on Facebook and Instagram, record video blogs on YouTube and run channels on Telegram. Before elections, this process becomes even more intense: political forces spend hundreds of thousands of dollars to promote campaign posts and videos, run bot farms, and engage new supporters ready to vote for them on election day. 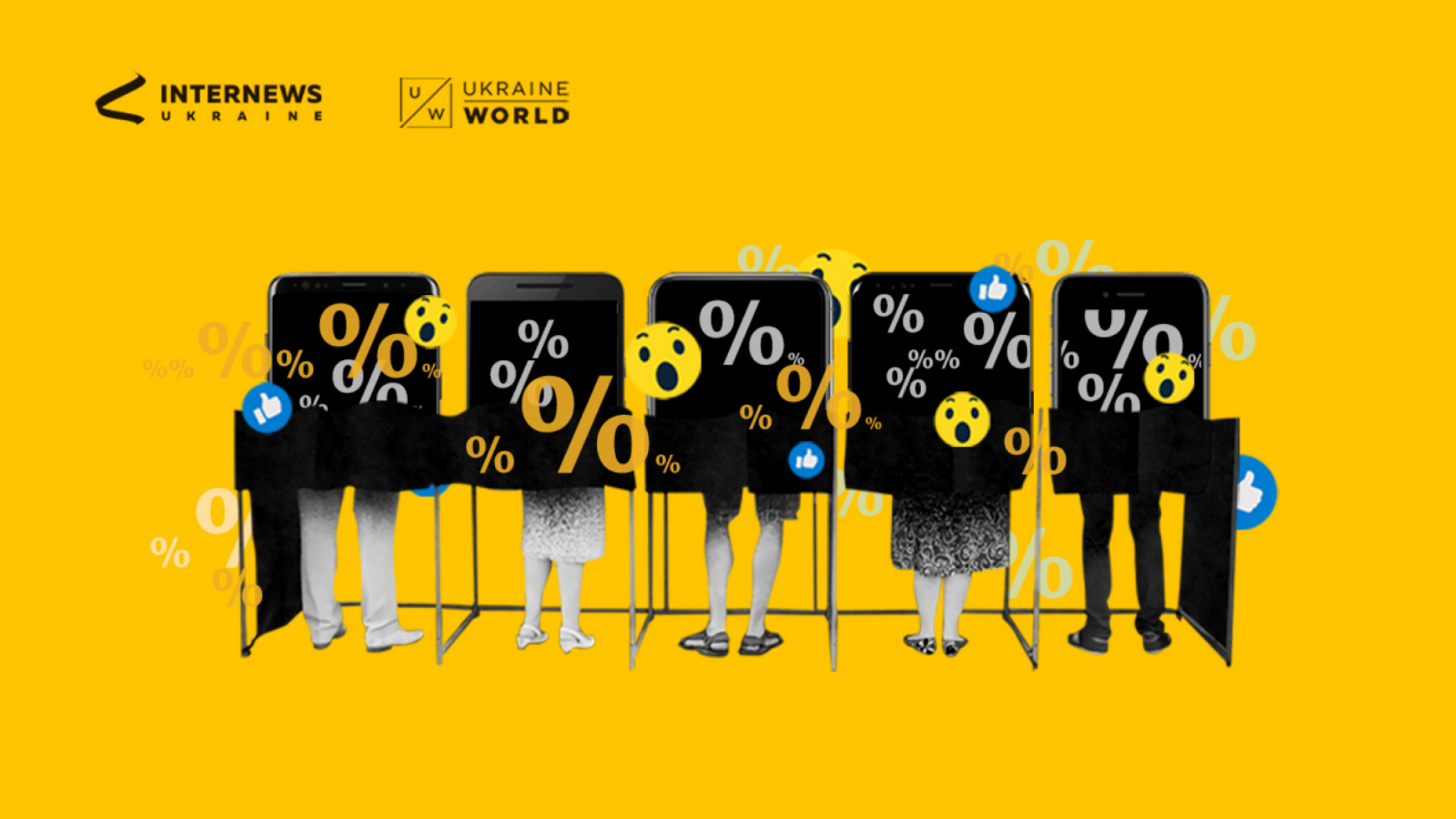 Internews-Ukraine already described the role social media played in the 2019 parliamentary and presidential elections and how Ukrainian politicians have used trolls on Twitter to spread anti-Western narratives. Now, we look at  how the 2020 local elections played out on the most popular social network in Ukraine - Facebook. We are doing this analysis as part of our larger analytical report, our Ukrainian Regional Media Guide. In this report, we describe the main regional media trends, the most popular regional media, and the key players affecting the various media markets of Ukraine. The study covers the entire territory of Ukraine, including the temporarily occupied territories.

How have we conducted this analysis?

We surveyed Facebook communities in the urban centers of five regions of Ukraine: Lviv (Western part), Odesa (Southern part), Dnipro (Center), Kharkiv (Eastern part), and Chernihiv (Northern part). We selected Facebook groups and pages with at least 18,000 subscribers or members. From all the posts published in those Facebook groups between August 25 and October 21, 2020, we selected 320 posts containing mentions of political parties and politicians who represented them and/or participated in the 2020 local elections.

We tried to find out how (c)overt agitation is carried out in those groups and pages that do not identify themselves as specifically political or belonging to a particular mass media outlet. Therefore, we did not analyze the official pages of parties or candidates and the Facebook pages of local media outlets.

What trends did we find?

During the pre-election period, regional Facebook groups were a place where anyone could distribute posts criticizing or supporting parties and candidates. This is especially true for groups where one can write or distribute publications without the administrator's consent. For example, in the Varta Lvova (Guard of Lviv) group (~26000 participants), a former deputy of the Lviv City Council Zynovii Husar shared posts critical of the President's Servant of the People party, as well as the party of Lviv's mayor, Samopomich, and called for the candidate from the European Solidarity party to be the city's next mayor. In the Kharkiv group (~36000 participants), one City Council candidate from the Svitlychna Bloc -- Together! (Yulia Svitlychna is a former non-aligned MP and Kharkiv Governor) actively criticized the activities of Kharkiv Mayor Hennadii Kernes and while also promoting his own party. On the Chernihiv | PLUS | Chernihiv Region group (~49000 participants) and other regional groups,  local blogger Ihor Stakh "exposed" the illegal activities of Chernihiv Mayor Vladyslav Atroshenko, calling him the "leading corrupt figure in Ukraine". 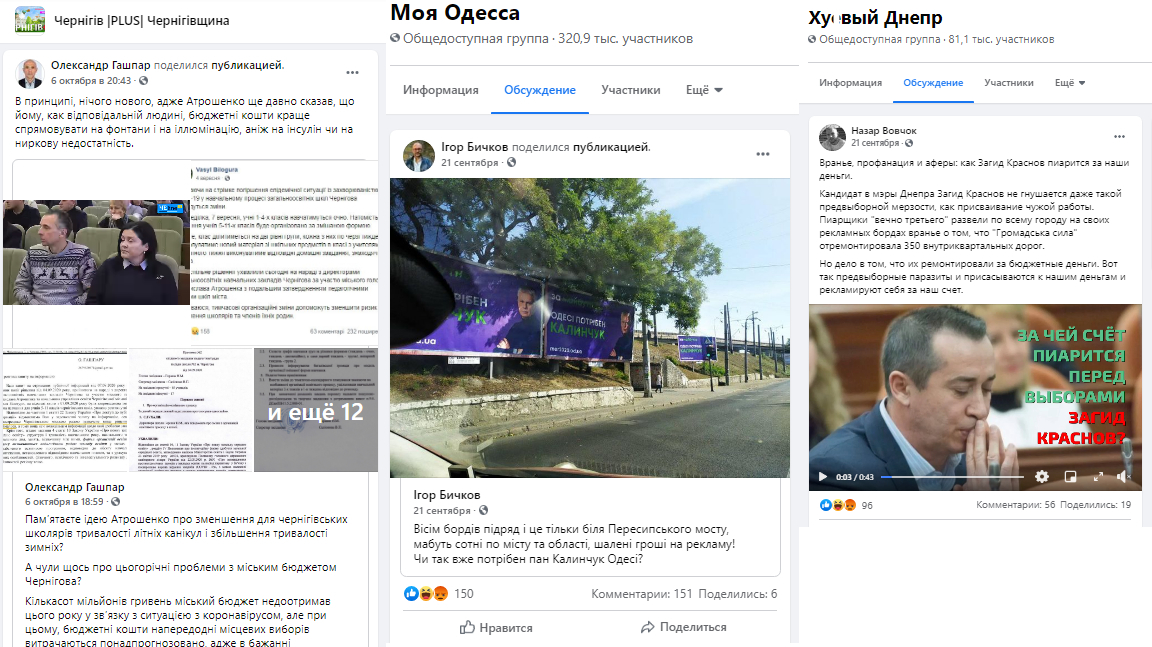 Often, the groups offered surveys of subscribers about their support for candidates,and results of various other opinion polls were disseminated in the Facebook groups and pages we analyzed. One such post read, "If you are a patriot, vote for ES [European Solidarity] and Oleg Sinyutka [Lviv mayoral candidate], the party of the people of Lviv that will pass the threshold [win enough votes to gain representation on the city council]!"  In this post in the Lviv group (~40000 participants), the poster, a representative of European Solidarity, linked to an article about a poll by the SOCIS polling organization. In the Odesa and Everything that Concerns It group (~140000 participants), a poster shared the results of a survey from the Ukrainian Sociological Service (which itself was registered only on July 7, 2020), all without making reference to its dubious source. Info Dnipro (~23000 subscribers) shared the results of a poll from the unknown Dumka Hromady (Community Opinion) agency, along with a post in favor of Oleksandr Vilkul, a pro-Russian mayoral candidate from the Ukrainska Perspektyva (Ukrainian Prospect) party.

Conducting their own polls has allowed the pages to interact more actively with their  audiences, garnering hundreds of comments and manipulating public opinion. For example, the Kharkiv Now page (~65000 subscribers) shared the results of a poll from the Telegram-channel Sociology|Kharkiv (~10000 subscribers), which describes itself as a forum for "honest sociology in your city". The results of similar polls organized by the pages themselves were also mentioned in Chernihiv. The mayoral candidates themselves, for instance independent candidate Denis Yaroslavskyi from Kharkiv, also organized their own polls with responses in the comments on the posts.

POLITICAL ADVERTISING ON BEHALF OF CANDIDATES

Local Facebook community groups also regularly distributed advertising or direct campaign materials without proper labeling. The My Odesa page (~320000 subscribers)  shared "expert posts" by candidate Andrii Palchevskiy (a businessman and former TV anchor leading his own political party, Peremoha Palchevskoho), who "offered his help to stabilize Ukraine," spoke out "against Ukraine's capitulation," and called for "protecting teachers from the coronavirus danger." "Synyutka challenges illegal new buildings in Lviv" - that is how the Energy of Lviv page (~ 20,000 subscribers) described the position of the mayoral candidate from the European Solidarity party.

Kharkiv 1654 (~104000 subscribers) posted about  how the Bloc of Hennadiy Kernes had distributed humanitarian aid, and current Kharkiv Governor Oleksii Kucher had planted new trees. Living in Kharkiv (~156000 subscribers) had one post about how representatives of the Opposition Platform - For Life (OPZZh) painted over Telegram handles for narcotics distribution on building walls, and another urging readers "not to fall into the net of political fraudsters: Y. Svitlychna Bloc-Together and OPZZh". This page also shared posts from the official pages of the Accent and Nash Krai parties, and shared a promotional video from Gennady Kernes.

Typical Chernihiv (~34000 subscribers) supported the Mayor Vladislav Atroshenko in every way: the page said that his party Ridny Dim (Native Home) was "the first party to declare not loud promises, but real steps'', and published a video discussing the city's main achievements under the Mayor Atroshenko. My Dnipro (~138000 subscribers) actively shared materials with advertising headlines about OPZZh and its candidate Serhii Nikitin, about Servant of the People, and about Mayor Borys Filatov. We found similar posts on Dnipro.Ukraine (~218000 subscribers). The main beneficiaries were the same: Boris Filatov and the OPZZh team along with Serhii Nikitin.

Bots that spread disinformation and agitation have been used widely for the past few years. This year's local elections were no exception. Here are two illustrative examples:

An extensive publication entitled The Prodigal Son or "The Servant" We Lost wasshared in Kharkiv for a Better Life (~50000 participants) from the Kharkiv News page. It reported that the son of Kharkiv Mayor Gennady Kernes decided to "enter adult life" by, without his father's consent, running Kharkiv mayor with Servant of the People, but was refused. Of course, it did not contain any facts that would confirm such a story. The post itself was the only one on the Kharkiv News page, which itself had only 41 subscribers, but it was widely distributed in other Kharkiv and all-Ukrainian Facebook groups. The account that distributed the post in  Kharkiv for a Better Life, together with other distributors, has all the signs of being fake.

In News of Chernihiv Region (~101000 participants), some accounts with signs of being fake first shared posts promoting the For the Future party and criticizing other parties, including Servant of the People, Ridny Dim with its leader Vladislav Atroshenko, and Syla i Chest (Power and Honor) with its leader Ihor Smeshko. 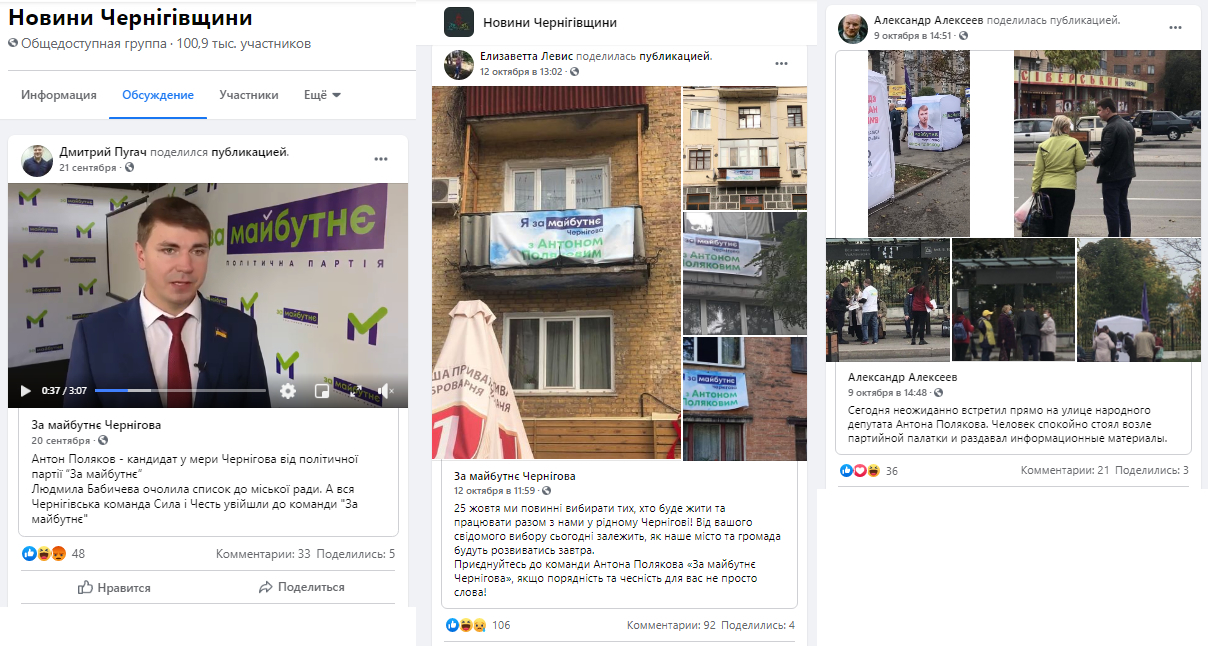 And others accounts agitated in these posts' comments on behalf of Anton Polyakov, the mayoral candidate representing  For the Future.

Although Facebook remains the most popular social network in Ukraine, other platforms were also widely used for political messaging and agitation. First among them is Telegram, which offers the ability to create  anonymous channels whose administrators are almost impossible to trace. There are many examples of such channels on the national level, but before the local elections, regionally-focused anonymous channels began appearing, as well. Parties and individual politicians actively used them to spread inside information.

A great illustration of this is found inKharkiv's Telegram-sphere. There were two especially noteworthy channels that were in constant battle during the elections. One of them, Slobozhansky Lifter (~2000 subscribers), regularly criticized the activities of Oleksiy Kucher, Kharkiv's Governor and mayoral candidate from the Servant of the People party, and praised Yulia Svytlichna, leader of the Svitlychna Bloc -- Together!. However, Kucher had the support of the anonymous channel GubernaTOR (~900 subscribers), which, in addition to providing positive coverage of Kucher's activities, sharply criticized Svitlychna and her party for alleged links to Opposition Platform - For Life and the head of the party's regional organization, Igor Rainin. 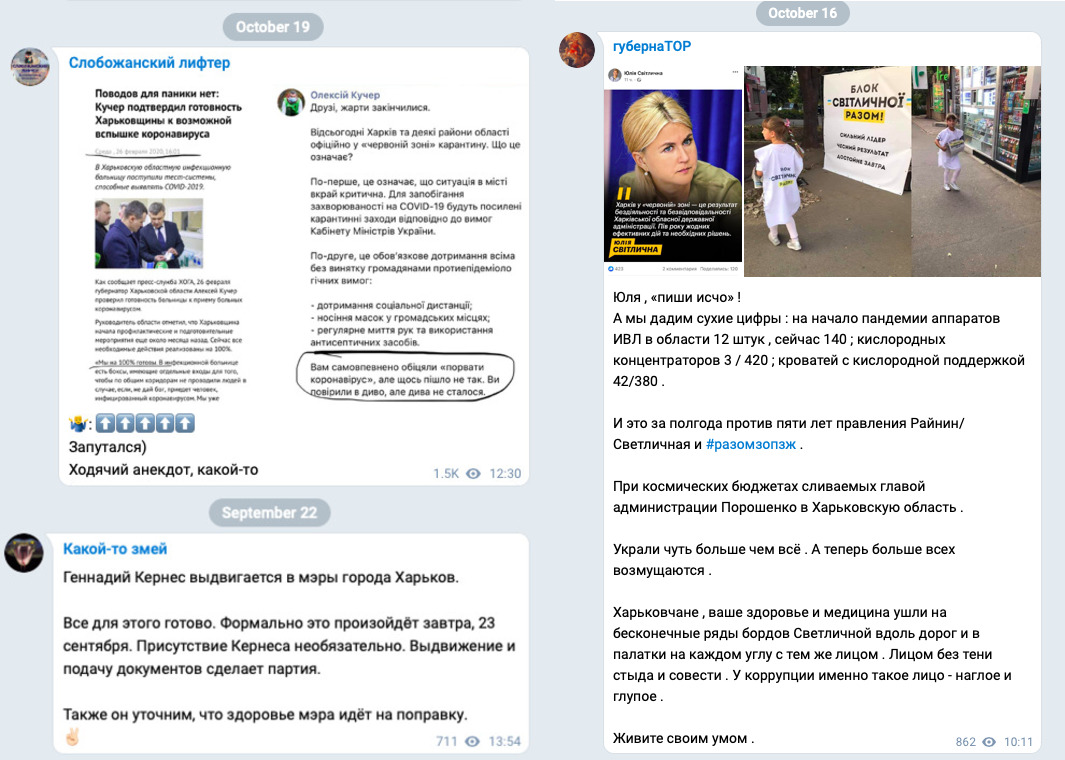 The 2020 local elections have once again demonstrated the huge power of social media as a tool of political messaging. The amount and variety of political agitation on social media is at the very least equivalent to that in traditional mass media. However, while the activities of TV channels, radio and print media are regulated by Ukrainian law, social media remains a largely ungoverned space for the dissemination of any and all information. All this happens without any clear standards or guidelines from either governmental and non-governmental bodies. This in turn contributes to the spread of unchecked political agitation and obvious disinformation

Does Ukraine have soft power? If yes, how strong is it? How can Ukraine increase its attractiveness to the world? Listen to our podcast to learn more.
PODCAST
April 18, 2019