October 2, 2018
Purple posters with three words, “Army, language, faith” line the road to the airport in Kyiv, Ukraine. In smaller letters, they proclaim, “We are going our own way,” which means away from Russia. These posters are incumbent President Petro Poroshenko’s new campaign slogan, and they differ from his previous rhetoric in 2014. 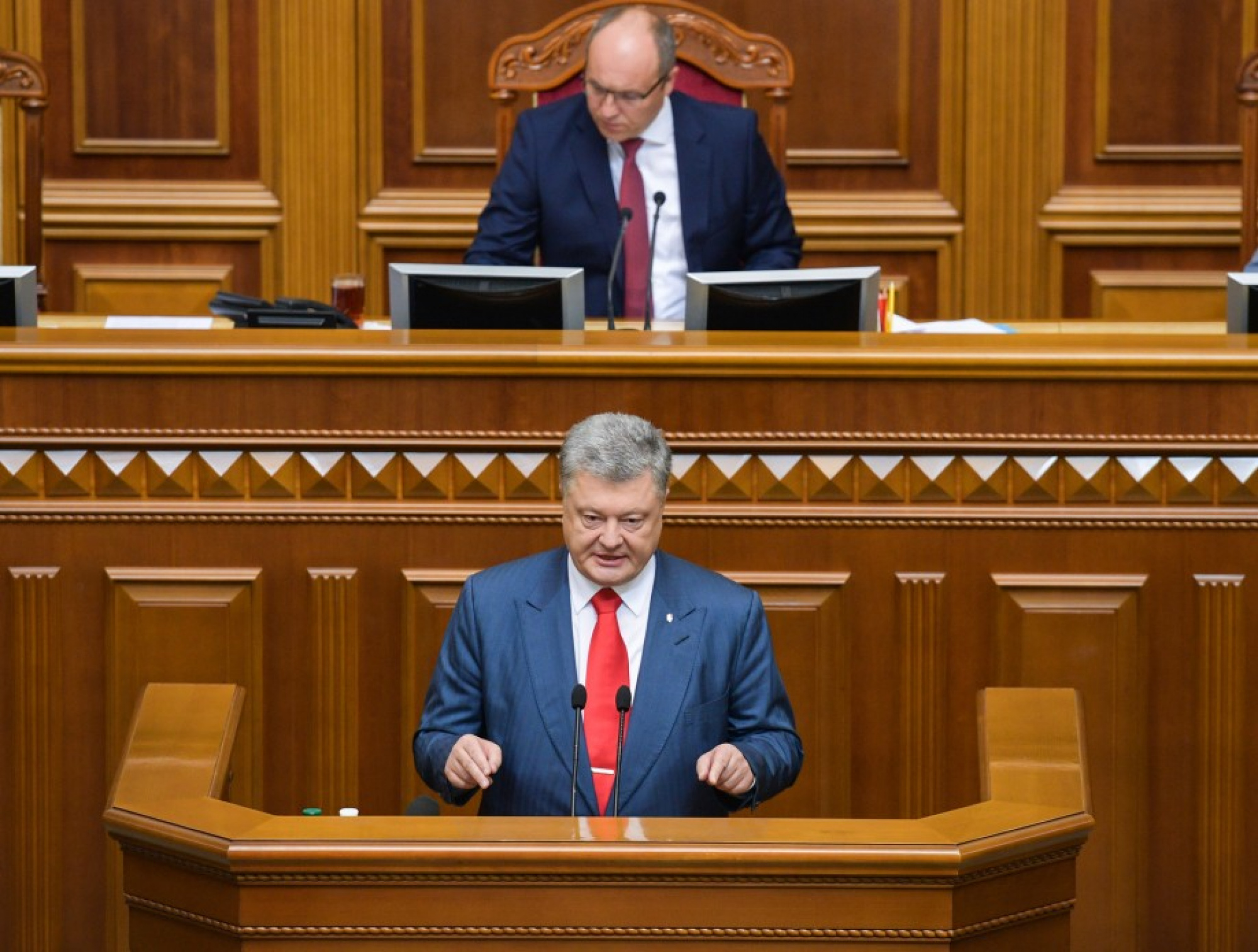 Poroshenko's language is more conservative. In 2014, Poroshenko was elected with an astonishing 54 percent in the first round by promising to introduce radical reforms, in line with the expectations of the Euromaidan that had just ousted former President Viktor Yanukovych. At that time, Poroshenko's slogan was "Living in a new way."

Now Poroshenko's reformist and forward-looking rhetoric is much less visible. Instead of liberal reforms, he suggests a moderate conservatism; instead of freedoms and justice, he is pointing to security and identity.

This conservative turn is not surprising. Since Russia invaded Ukraine in 2014, Ukraine has lost 7 percent of its territory and 13 percent of its population.

The army played a vital role in Ukraine's resilience. Despite initial losses in 2014 and 2015, Ukraine rebuilt its military and stopped Russian forces from advancing. Unsurprisingly, citizens trust the army and volunteers more than anyone else, while Poroshenko has huge negatives at 60 percent.

Language and faith are two other themes in Poroshenko's reelection bid.

The Ukrainian language, prohibited in tsarist Russia between 1863 and 1905 and marginalized in the Soviet Union after a brief period of revival in the 1920s, is an important factor in today's political identity. 66 percent of Ukrainian citizens identify as Ukrainian speakers, although Russian is still the predominate language in big cities in the east, south, and center.

As for faith, religion has become a key issue. Ukraine aspires for its church to receive international acceptance as independent from Moscow, and this recognition would have huge internal and geopolitical consequences. The birth of a new Ukrainian "canonical" orthodox church recognized by Constantinople would weaken one of the major channels of Russian influence over Ukrainians.

Poroshenko's conservative turn may have consequences for Ukraine's reforms. A greater focus on identity and security may diminish liberal efforts toward more transparency and freedoms.

Poroshenko's reform balance is ambiguous. In many fields, there have been reform attempts, but they mostly achieved only partial results.

Take the police, for example. In 2015, a new patrol police was set up. It was visible: new faces, friendly practices, and good-looking uniforms. But many analysts are beginning to question if the reform accomplished anything. Many new officers left their jobs, and the "old guard" is slowly pushing the new recruits aside.

Judicial reform remains highly problematic. While Poroshenko promised a complete reboot of the judicial system, the reforms were too superficial and did not target the key problem: people. One can change the rules and structures of these institutions, one can increase their institutional independence, but if one keeps the same people in place, the system remains the same.

These examples can continue; some things were done, but in order to be fully successful, they should have been brought to a logical end. Partial reform is never genuine reform. In some fields like electoral reform, no progress was made at all.

One can suspect that these are the reasons for Poroshenko's disastrously low support. After taking 54 percent of the vote in the 2014 election, only 5-6 percent are ready to vote for him today. Only 14 percent of Ukrainian citizens trust him, while 77 percent don't.

However, Poroshenko isn't alone. Ukrainians don't like any of their options. His key opponents have almost the same levels of distrust: 75 percent of citizens don't trust Yulia Tymoshenko, the current leader in next year's presidential race. Voters are also reluctant to commit to a candidate this far out: only 10-13 percent of voters would vote for Tymoshenko today; other "leading" candidates fluctuate between 5 and 9 percent. If you add the large number of undecided voters and those who won't vote (35 percent according to the Democratic Initiatives Foundation), it's easy to see that Ukraine's next presidential election may be the most unpredictable in history. With his 5-6 percent rating, Poroshenko can still make the second round, where we should expect him to mobilize voters with his security and identity themes.

Unfinished reform is only one of the reasons why Poroshenko's support is so low. There are at least three other reasons.

First, citizens' welfare has substantially diminished after 2013, because of war, loss of industry in the annexed or occupied territories, Russia's trade war, and an increase in consumer prices.

Second, some media (mostly with suspected Russian roots) blame Poroshenko for having a financial interest in continuing the war in the Donbas, and some Ukrainians believe this narrative.

Finally, Ukrainians don't trust their politicians, and this is a long-standing problem.

Still, Ukraine has changed on Poroshenko's watch. Despite the war and social traumas, 2014-2019 may be the most dynamic decade in Ukraine's post-independence history.

Many local communities have revived and started developing thanks to decentralization reform which brought energy and financing to the grassroots level. Roads are being massively rebuilt in the country. New businesses are opening up, mostly in the consumer sector, design, technology, agriculture, or manufacturing. The gas industry is far less corrupt though far from perfect.

Ukraine is also taking steps to reduce Russian social and cultural influence. The government supports the publication of books, music, and films in the Ukrainian language.

The key task for the next president and next parliament is to make the post-Euromaidan changes irreversible.

It's entirely possible that the next president will be worse than the current one, given the high levels of distrust, the rise of populists, and Russia's influence on Ukraine's elections. Therefore, it is important to ensure that the achievements of 2014-2018, however partial they are, are not rolled back.

At the end of 2016, Victor Pinchuk—one of Ukraine’s wealthiest oligarchs and sponsor of the recent YES 2018 conference—published an op-ed in The Wall Street Journal...