December 2, 2021
Russian proxies have been giving information backing on social media to the Lukashenka-manufactured migrant crisis on Belarus’ borders with the EU. 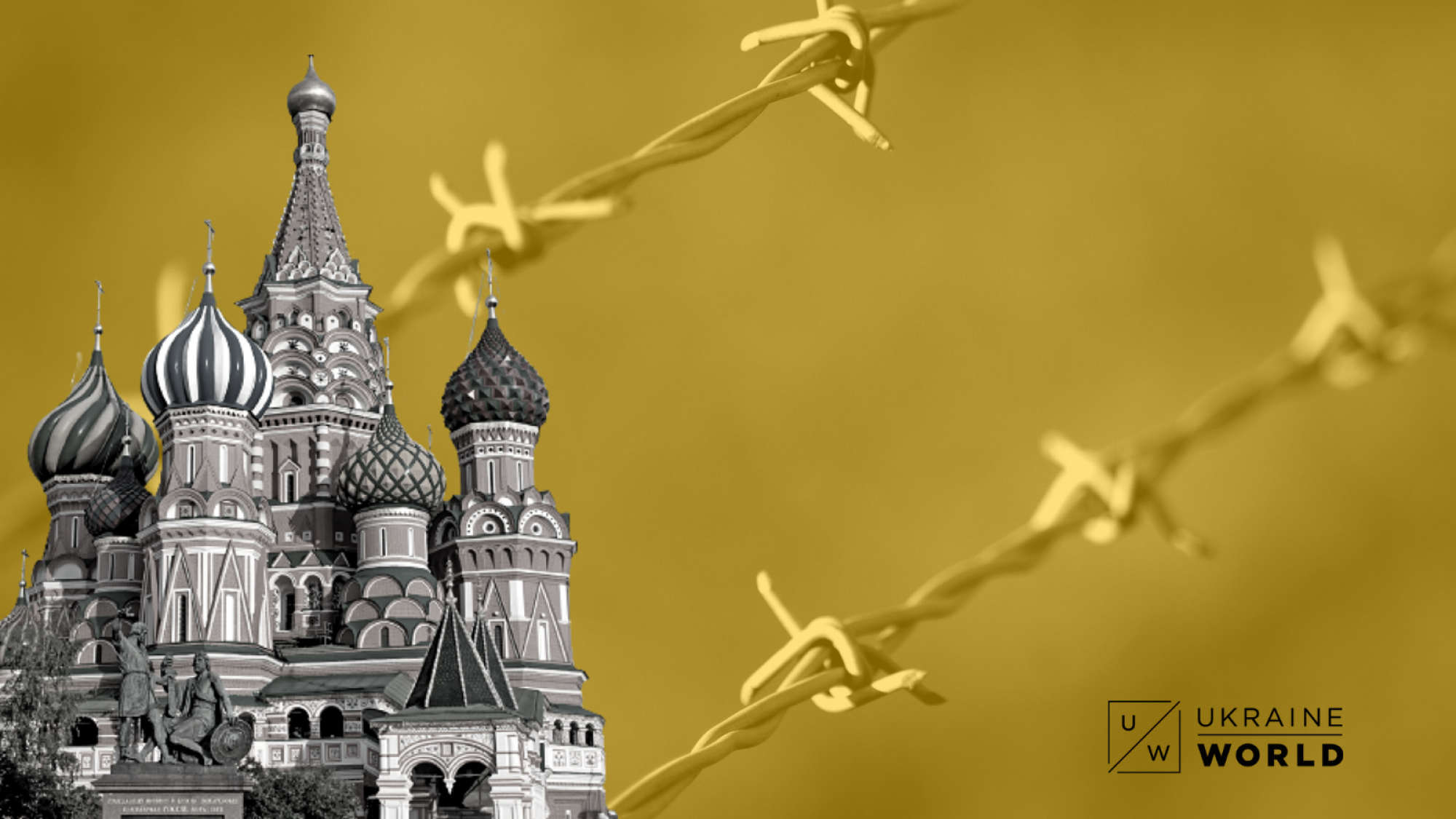 Since August 2021, thousands of migrants, mainly from Iraq, Syria and Yemen, have massed at Belarus’s borders with Poland and Lithuania. The EU has accused Aliaksandr Lukashenka, the self-proclaimed President of Belarus, of weaponising migration by allegedly facilitating the transport of thousands of migrants to Belarus’s border with EU member Poland. Poland’s prime minister Mateusz Morawiecki announced on September 20 that Poland had mounting evidence that Belarus, with Russian backing, is orchestrating the wave of migrants to overwhelm Poland’s borders.

Lukashenka denied the allegation that he has been driving the crisis, and pressured the EU and Germany to accept some of the migrants. However, it’s clear that he seeks to gain from the whole situation. In a call with German Chancellor Angela Merkel on November 17, Lukashenka said he wanted the EU sanctions against Belarus to be halted and to be recognised as Belarus’s president (something denied to him by the bloc by virtue of the massive violations reported during his ostensible re-election in August 2020). Belarusian state-owned media have used this story to portray the EU as creating tensions on the border by not letting refugees in, while at the same time depicting the Belarusian government (which has been observed abusing migrants and forcing them towards the border) as merely providing humanitarian assistance.

Russian president Vladimir Putin also insisted that Russia has "absolutely nothing to do" with the ongoing crisis. Nevertheless, as in the case with Belarusian media, Kremlin-connected media outlets have tried to demonise Poland and accuse NATO of escalating tensions along the Belarus-EU border.

Russia has also used social networks to promote its narrative about the events. UkraineWorld has studied one of these Russian campaigns and has tracked its spread.

On November 10, an article titled “Проблемы Европы с мигрантами только начинаются. А не надо было майданить в Белоруссии” (Europe’s problems with migrants are just beginning. It should not have organised a Maidan in Belarus) appeared on Yandex Zen, a Russian blogging service. According to the article, “it's no secret that the protests in Belarus last year were coordinated from the Baltic States and Poland...But everything in this life comes back as a boomerang — someone else's grief, Maidans, sanctions, and unfulfilled promises. The migrants who will soon flood Europe will start committing crimes there and sitting on the necks of Europeans, turning Europe itself into a "so-so place", will make them think about all their sins”, the piece reads. It has gained 90 thousand views, 3.7 thousand likes, and 1 thousand comments. 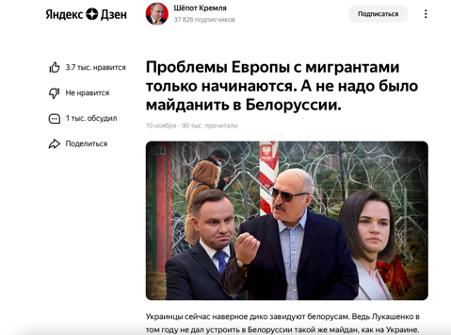 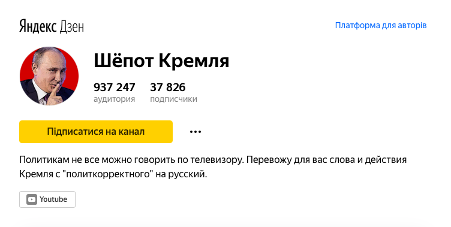 The original article from Zen Yandex has also been reposted by several pro-Russian fringe news websites including antimaydan.info, inforuss.info, gid55.ru, omsnews.ru, as well as other blog aggregators like cont.ws. All these publications further expanded the audience of the original post on Zen Yandex. 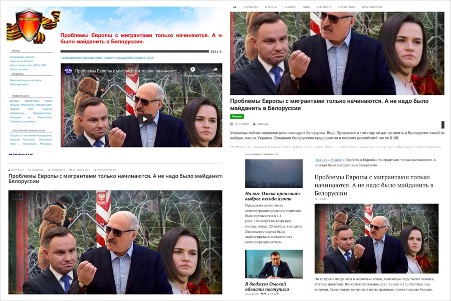 Social media has also been used to spread this narrative from the original article on Yandex Zen. 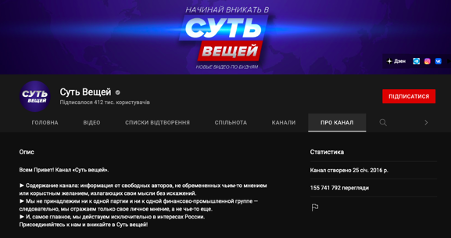 The video essay about events on the EU-Belarus border, identical to the post on the Whisper of the Kremlin blog, was published on November 11, the day after it appeared in text format. The video has 23 thousand views as of November 30. It links to the original post on Yandex Zen in its description, which means that The Essence of Things channel and Whisper of the Kremlin blog promote each other. 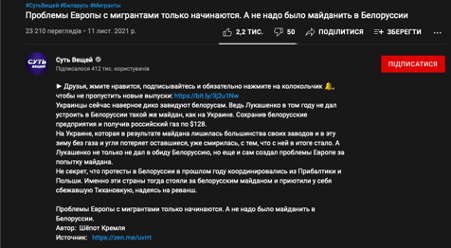 Analysis via the social media monitoring tool Social Blade reveals potential inauthentic activity on the YouTube channel. In March 2020, the channel gained 16 thousand subscribers in one week, five times its average new subscribers per week. Moreover, it gained no new subscribers between March and June of 2021. Furthermore, in December 2019, the channel lost almost 5 million video views, which could mean that either many of its videos were deleted, or that those views were from bot accounts deleted by YouTube. 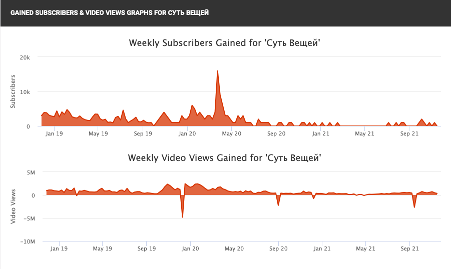 We also analysed the spread of the original article on Zen Yandex and its “mirrors” on fringe news websites via CrowdTangle, a public insights tool owned and operated by Meta. The analysis reveals that bot-like accounts were spreading these articles in various Facebook groups targeting Russian-speaking people in Ukraine, Moldova and Lithuania.

One such account is Потап Гаврилов (Potap Gavrilov), an account with a stolen profile picture and friends who are mostly from India. 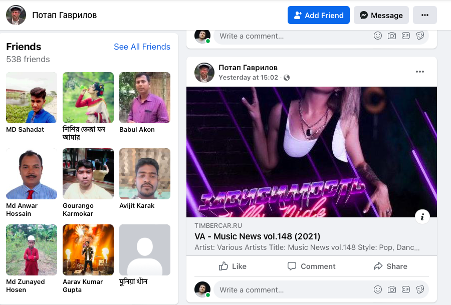 Gavrilov’s posts in these groups received 198 combined reactions, but many more Facebook users may have been reached by the posts. It is also worth noting that Gavrilov mostly targeted groups of general interest with no pro-Kremlin affiliation.

Another bot account spreading this article is Максим Кондрашов (Maksim Kondrashov). This account has 4949 friends (way too many for a regular person) and posts only links to gid55.ru, one of the fringe news websites which re-posted the article from the Whisper of the Kremlin blog account. 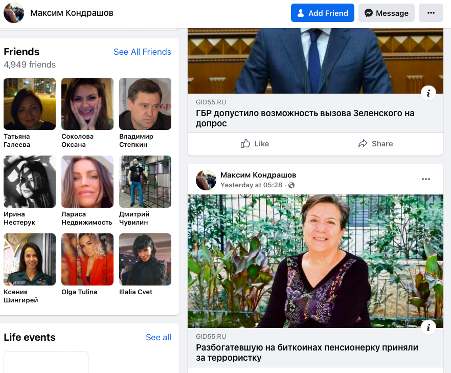 The Maksim Kondrashov profile also posted the link to an article on gid55.ru to Новое Приднестровье (The New Transnistria), a public group for residents of Transnistria, a Russian-supported quasi-state in Moldova, even though Kondrashov purports in his description to live in Omsk, Russia. This is another example of how the authors of the original post on Yandex Zen have been trying to reach out to Russian-speaking audiences in other countries. 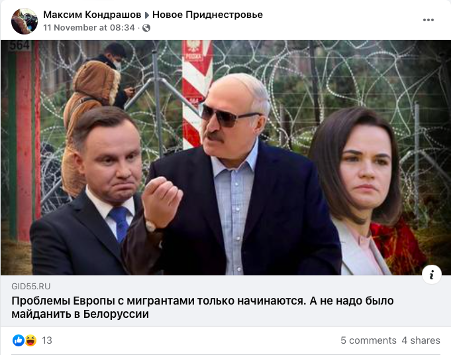 The video essay from The Essense of Things YouTube channel also appeared on Facebook. On November 11, it was published by the Facebook page Русская Литва (Russian Lithuania), a page which regularly shares Kremlin narratives, and garnered 2.7 thousand views.

Furthermore, the video from the Russian Lithuania page was shared to numerous public groups in Moldova and Lithuania which unite pro-Kremlin audiences in these countries. 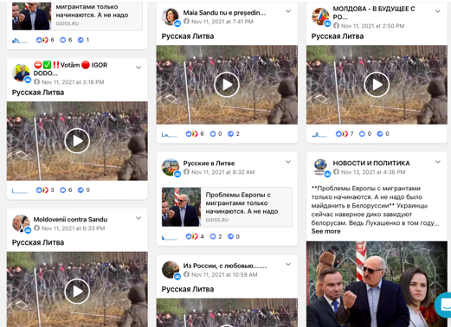 With all of its social media amplification, the original article from the Whisper of the Kremlin blog on Yandex Zen has reached more than 100 thousand users. It is impossible to determine just how many of these were from real people, or how many believed what they read or saw.

Nevertheless, the production of such an article and video essay was likely quite cheap, and have thus paid off. This gives Russian proxies an opportunity to launch as many different narratives as they need and see which ones stick with the audiences they are trying to target. In this case, the audience included Russian-speaking citizens of Ukraine, Moldova and Lithuania who may have pro-Kremlin sentiments. While these people may not watch or read “official” Russian media, they were exposed to Kremlin narratives on the events on Belarus’s borders with the EU on social media. Based on how this narrative is received, the actors responsible for its launch may adapt it and try out a different version of it; after all, it costs them very little to do so.

The Church Against Vaccines: How the Russian Orthodox Church Opposes Vaccination in Ukraine