How Should We Understand Ukrainian Society and Its Language?

What Is It Like to Live under Russian Occupation?

January 17, 2023
Until February 24, 2022, few Ukrainians believed a full-scale Russian invasion could ever happen, much less that they could fall under enemy occupation. 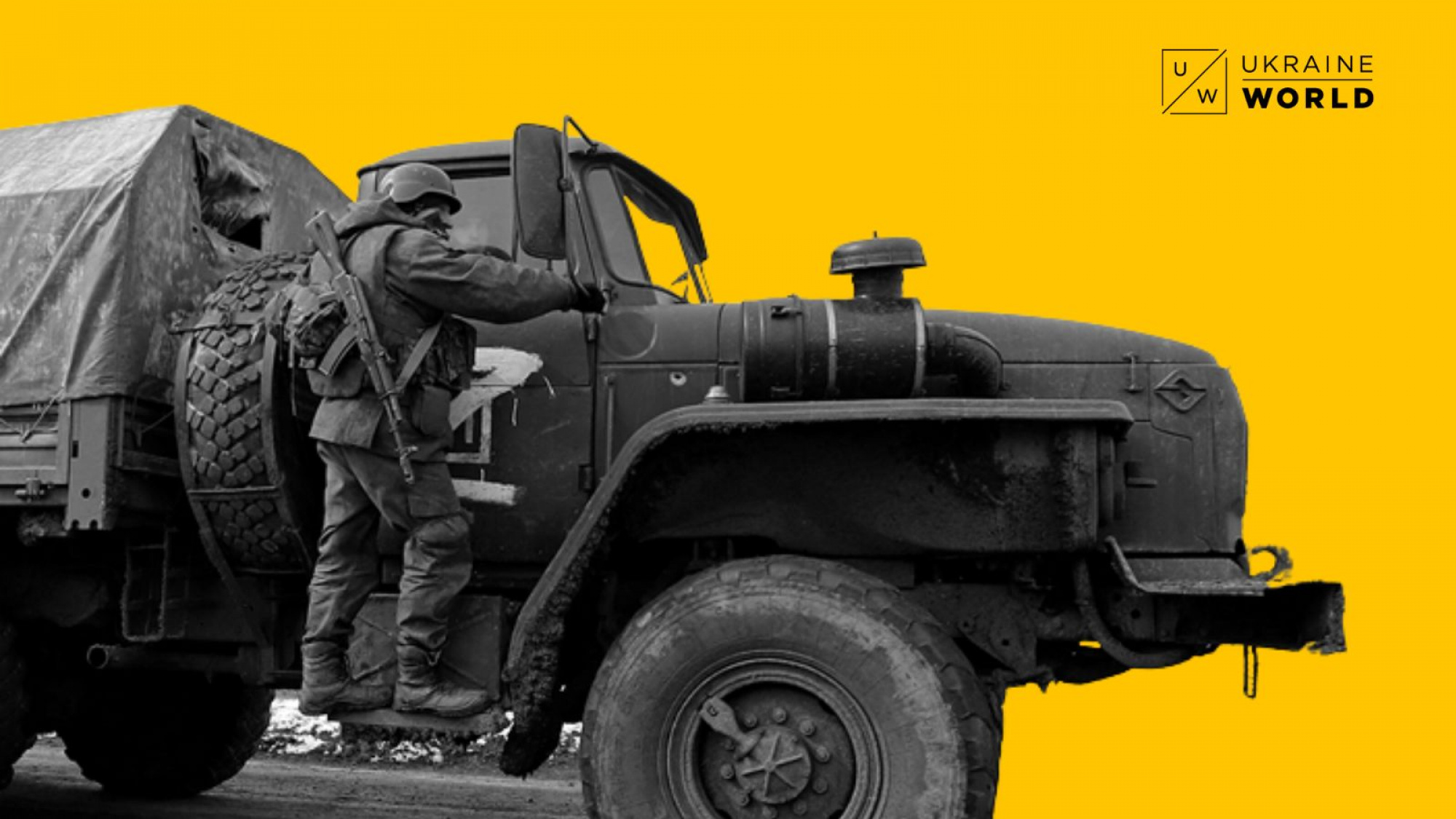 Nevertheless, in February of last year, the Russian military brazenly attacked Ukraine and began shelling our cities and villages. In some settlements, people were held hostage by Russian occupation forces.

Until the Ukrainian military liberated these cities and villages, life for local residents was a nightmare. Below we share with you the stories of people who survived Russian occupation in Kyiv, Chernihiv and Zaporizhzhia Oblasts.

Risky escape from the occupation

February 24, 5 am - the first missile attack on the military unit of Iryna's city. She immediately understood what was happening. Mimi (Iryna's dog) barked furiously. She grabbed her in the arms and ran into the room where the windows overlook the field and the military unit. Iryna saw two more explosions.

She started to cry and panic. She called her husband (he's a trucker) and shouted: "Kitty, we're being bombed!" He was in shock, but he tried to calm Iryna down.

She collected documents and essentials for herself and Mimi. After sitting in the basement for several hours, Iryna with her brother and mom decided to go to her grandma's in a village in Chernihiv Oblast. Who needs that village? Unfortunately, nobody thought about the fact that the Kyiv highway passes through the village.

February 25. Iryna and her relatives woke up and decided that they had to buy groceries, because there were a lot of them at grandma's. They went to the neighboring village, bought everything they needed. And upon returning 2 hours later, the Russians had occupied them.

They had entered the village. At all exits and entrances, they set up their checkpoints. They settled in uninhabited buildings, blew up the mobile phone tower and established a curfew from 5:00 pm.

In the first days, they robbed all the grocery stores. The fact that it was a village really saved people: you could buy eggs, milk, and cheese from locals. Iryna and her family themselves baked bread in the oven while there was flour. And when it ran out, they threshed wheat themselves.

Since the Russians were planning to break through to the capital, huge convoys of vehicles passed through the village every day. And all these tanks were marked with Z, V and O. "When the columns were moving, in no case could you look them in the eye, because they would immediately shoot," - Iryna recalls.

At first, the occupiers behaved calmly towards the locals, but rumors came from neighboring villages that they shot an old man who was holding a mobile phone, then shot a veterinarian who was leaving for work in his own car. Then they began to drive around the village as if they were at home. Patrols came by every hour and a half.

When they were attacked by Ukrainian armed forces, the Russians went mad and looked for weak people upon whom to take out their anger. They encircled the village from all sides.

In total, the village was under occupation for 37 days. Iryna managed to get out of there on the 21st day. The fact that she had to have an operation forced her to take a risk. Before the war, her doctor had warned her about this, and she didn't have much time. So she had a plan to escape from the village.

The locals learned that only 6 km from them there were no Russians, and people were living an almost normal life. But it was possible to get there only over open ground. Iryna's cousins agreed to take the risk to bring her there. But it was necessary to carefully calculate the time in order to have time to do it between the Russians' patrols.

On March 16, they left very early in the direction of Pryluky. It was incredibly scary. But when Iryna saw the first checkpoints with Ukrainian guys, tears came to her eyes. They checked her documents and let her through. She just couldn't believe that she was free.

"The next day my husband came to me. I could hardly wait for him, I said goodbye to him every day, because I didn't know if we would see each other again," Iryna said.

On March 18, Iryna returned with her husband and dog to Brovary, Kyiv Oblast, and from there the family went to Chernivtsi, where she underwent surgery. Iryna and her family are now safe and well.

Surviving the blockade and occupation of Slavutych

After the first explosions on the morning of February 24, Polina and her daughter Aglaia packed up and left Kyiv for Slavutych, a small town 50 km from the Chornobyl Nuclear Power Plant, where their family lives.

Slavutych is a town in the depths of pine forests, several kilometres away from the Belarusian border. Its population consists mainly of the nuclear power plant employees. The city has no strategic facilities, which is why Polina considered it a safe place to stay.

Shortly after their arrival, the family realized that they would be under a blockade: for security reasons, the only road to the town was blocked, and the forest nearby was mined. A few local supermarkets stopped working in the first 3-4 days.

Local farmers managed to deliver some milk, potatoes, mushrooms, and sometimes meat. The bread was baked on a small mill in Slavutych: it was grey, flat, and crumbled. There were 11 people living in Polina's parents' house: 7 adults and 4 children. The whole family spent the next few days standing in crowded lines for up to 7 hours to buy some food. Some days there was nothing to buy.

Sometime later, Polina began to feel ashamed for being hungry. When she ate, she felt like she was stealing food from others. Later, when she was safe in Kyiv, it took her a while to understand that food was available, and you can buy it easily in the nearest supermarket.

When electricity was cut off in Slavutych at the beginning of March, the family spent the whole week cooking and heating water on a fire in their yard. They used to go to bed early, trying to hear how close the Russian troops were.

The assault on Slavutych lasted for 3 days. The Russians fired at the soldiers of territorial defence forces and civilians. When Russian soldiers finally entered the city, they began to rummage through the houses, looking for the Ukrainian military.

Fearing the Russians coming to their house, Polina's family decided to hide some food. Polina also deleted some videos and photos on her phone, re-uploaded her Facebook avatar without the Ukrainian flag on it, and deleted a lot of messages and other information that could have harmed her or her family if they came under Russian occupation.

After Slavutych was occupied, Polina decided that she and her daughter would try to leave the town. The evacuation route passed through the war zone and was extremely dangerous.

"We prepared to leave, cutting old sheets for tourniquets. I wrote Aglaia's blood type and our phone numbers on her hand. We hid money and phones. It felt like we were going to die", Polina said.

Nevertheless, the evacuation went smoothly. The Russian checkpoints were empty. There were no shootings or fights along the road. After they reached Kyiv in 6.5 hours, Polina felt relieved. She decided to go abroad for the safety of her daughter.

The Russian military forces occupied Slavutych for 9 days. Soon after Polina and her daughter left the town, some humanitarian aid arrived. Polina's parents were able to stock up on food, and her dad returned to work.

During the first days of the war, Anastasiia's family packed their things and went to her mother's so that they could all be together. Three of them had three animals. Nothing was clear, they were constantly hearing explosions outside the city, and they were following the news nonstop. They could not have even imagined that after 2 days of the war, on February 26, the Russians would enter the city and cut them off from the world.

On the 26th, Russians blew up the railway bridge in Vasylivka and bombed the roads, making it impossible for Ukrainians to leave. In early March, all communication was completely cut off. Anastasia and her family felt like they were kidnapped in their own city, in their own home. Z-cars were all over the city, as were armed soldiers.

For the first few days, people bravely went to rallies and tried to fight on their own, but by early March, Russian paddy wagons had been parked in a row near the Berdyansk embankment to stop any rallies. Russian Rosgvardia, in addition to soldiers, began patrolling the city. Then, the occupiers began stealing people from their apartments and from the street. In front of their eyes, a man was dragged from a cafe in the center of Berdyansk and taken away into the unknown. Anastasiia and her loved ones lived in constant fear, like an endless groundhog day.

"During the first two weeks under occupation, we could only watch in Berdyansk chats how desperate people who tried to leave were being killed on the outskirts of cities in cars. Exit from the city was blocked. And we went into our survival mode," Anastasiia recalled.

Only on April 3 did they manage to leave on the evacuation bus. They travelled more than 14 hours from Berdyansk to Zaporizhzhia (200 km). Anastasiia and her family were stopped at every checkpoint and inspected by the Russians.

Russians checked their stuff and searched for tattoos. They mockingly asked if Anastasiia's family was carrying grenades, and who was forcing them to go to Zaporizhzhia. Russians believed that someone was forcing them to go to Ukraine. As Anastasiia and her family drove, they saw an endless line of destroyed houses and burnt cars. The Russians were checking phones - Ukrainians had to delete all messengers and photos so that they would not find anything. Some people's phones were taken away. It was impossible to photograph anything along the way - the Russians were checking. There were sections of the road where it was impossible to get off the bus at all, as there were mines all around.

When Anastasiia and her family arrived in Zaporizhzhia, kind people gave them shelter and food. The next day, when they went to the supermarket and saw the shelves full of groceries, they just burst into tears. During the occupation, they had lost any sense of being used to this being possible.

Anastasiia and her family left Berdyansk a few months ago, but the fear of loud sounds and planes is still with them, as are the nightmares.

In this study, we dig into these actors’ concerted (dis)information behaviour, reveal networks of fake fans which pro-Russian, anti-Western actors are using.
VIDEO
May 8, 2018