September 12, 2022
August 1 is World Lung Cancer Day. Every year, this disease claims 1.8 million lives worldwide, 9 thousand of which are Ukrainians. 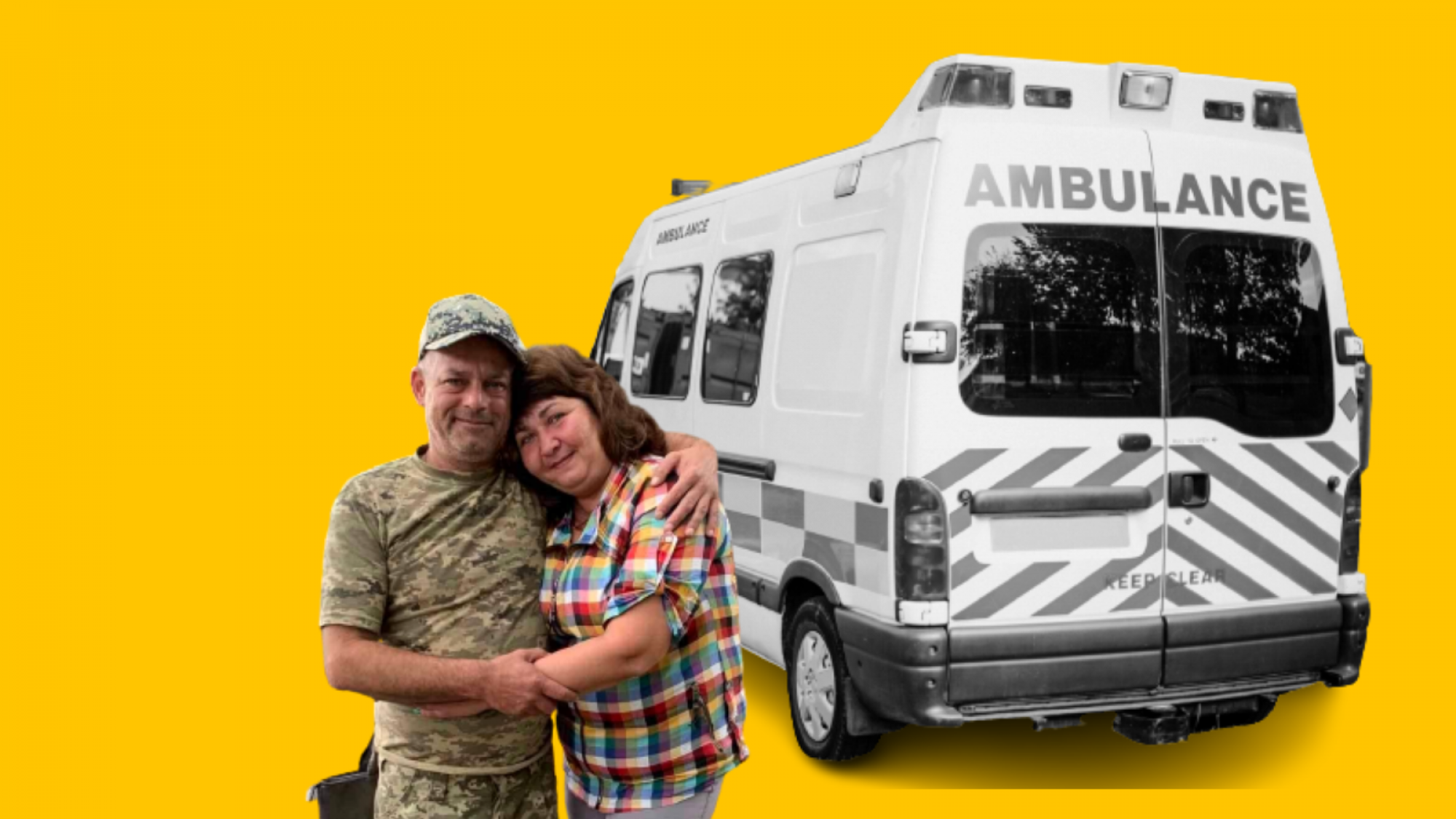 August 1, 2022 was also the 159th day of Russia's full-scale invasion of Ukraine. Since February 24, 2022, Ukrainian cancer patients have been forced to fight for their lives under shelling and rocket attacks by Russian troops.

One such patient is Olga, who lives in the city of Dnipro in southeastern Ukraine.

She was born in this city, and it is where she grew up, studied, married, and gave birth to a daughter and a son. Her hobby is growing flowers in her garden. She takes care of them like her own children. Flowers bring her joy, satisfaction and peace of mind. Olga has been working as a nurse for 23 years.

"I have huge respect and love for my profession. Healthcare providers take care of people's lives, often risking their own health. In November 2020, at the peak of the COVID-19 pandemic, all medical facilities worked 24/7. It was hell. Outpatient clinics went to help the inpatient care facilities. There was a deficit of healthcare workers, because they were getting sick and dying as well.

There were not enough beds in intensive care, and we fought for the life of every patient. Droppers, catheters, oxygen masks, antibiotics, pulse oximeters — everything was swimming before our eyes. Sweat poured down, blurring your vision. At that time there was a shortage of the oxygen concentrators, so we had to move them from one floor to another morning, noon and night. Despite the physical exhaustion, the most difficult thing was to communicate with patients’ relatives, who were begging on their knees: "Save my mother/husband/child, please!". You knew that they were already at death’s door, but you continued to fight for every life to the end," says Olga.

One day, after a gruelling shift, Olga felt weak and feverish. She tested positive for COVID and had a CT-scan. The results were shocking – they showed signs of lung cancer.

"How? I am only 45 years old. I have never smoked. This cannot be true!

"I was sure that I would be fine. I am a very positive person, and I always encourage others who are weak in spirit. Alright, I thought, they will remove that damned tumour, and everything will be fine," she recalls.

But there was no miracle. At the end of December 2020, her cancer was diagnosed as having reached stage 4. Its treatment required an expensive targeted drug with a per-month price ten times her monthly salary. And it had to be administered long-term.

"It was impossible to buy this medicine. I was giving up in despair. It was the end. I don't want anything. Tears streamed down my face. But my husband gave me so much support.

"Olya," he said, "you are strong, and I will always be by your side. We will overcome everything, and you must live!" His words inspired me a lot and gave me the strength to start fighting for my life. This is how my battle with the disease began," Olga shares.

Olga’s family decided to start fundraising for the medicine. Friends, colleagues, patients and other people who cared came to help. On her first day of fundraising, Olga was able to raise more than a quarter of the necessary sum to purchase one pack of the medicines.

"I was just overwhelmed with joy. But we do not live in a fairy tale, and everything cannot be so good. On the 2nd day of our fundraising, I once again logged into my online banking to check the collected fund. And then I got dizzy. There were no funds on my account, they disappeared," says Olga.

The couple filed a report with the bank and the cyber police. But money had been stolen.

"In 4 days we accumulated enough to buy the first pack of the targeted drugs, and I started the treatment. Two months later, we got a call from the bank, and they told us the news that we never expected — they were able to return the money. Later we used it to buy another package of the medicine," the woman shares.

The treatment gave Olga the opportunity to live a full life. After 4 months, she returned to work, where her beloved colleagues and patients were waiting for her. Thanks to the treatment, Olga was able to work and do household chores again. Life went on.

On February 24, 2022, at 5 a.m., Olga and her husband were drinking their morning coffee before going to work. They heard a very powerful explosion, then a second one. The house shuddered.

"A neighbour called: "Turn on the news! The war has begun!". All channels announced one thing - explosions all over the country. "Mom, why is it so loud! Why are you crying?!", the 12-year-old son woke up. "Son, the war has started!", Olga recalls through tears. "My mother was born in 1940, a so-called “child born during the war”, and now my son is a child who is witnessing war in the 21st century! It's terrible. We were warned to stay at home. But I'm bound to service, and my profession is to help people. That's why I went to work. War again. War against disease, war in my homeland."

On February 26, Olga got a call from a colleague who was looking for temporary shelter for friends from Mariupol who were fleeing the war. Olga and her husband, after thinking for a while, offered their home as shelter.

There was a whole family: an elderly woman, her two daughters, their husbands, their children, and a dog named Gucci. They were very scared and weary from their travels. At that time, this family did not know that there would be nowhere for them to return. Olga tried to do everything to make them feel comfortable in her home. Two days later, this family moved on. And Olga hopes that in future these people will be able to rebuild their home on the seashore, and then they will meet again, under better circumstances.

"People evacuated from other towns began to be admitted to Dnipro hospitals, many of them seriously injured. They were traumatised not only physically but emotionally. Everyone needed special attention, everyone needed to be listened to and helped," Olga explains.

With the beginning of the war, it became almost impossible to continue fundraising for Olga’s treatment. Many people in Ukraine have lost their homes and jobs. Patients with a diagnosis like Olga's were doomed to die.

"Everyone tried to help the soldiers who protect us. Our family had donated money to the army as well. And our children helped to weave camouflage nets," says the woman.

“In these harsh times, I have received tremendous help from the NGO Athena: Women Against Cancer: - five packages of my medication! This means 5 more months of my life!” Olga says.

Despite the fact that Ukrainian patients now have the opportunity to receive free care in European countries, Olga has decided to stay in Ukraine.

"I want and can be useful in my homeland.. What will happen if all doctors and health care providers flee abroad? Who will people seek help from? All my family have worked in medicine. My late mother worked as a paediatrician for 45 years. She gave her life to help children. I am a nurse. My daughter is a medical laboratory technician. The husband served in a medical battalion.

Now my husband has joined the Ukrainian Armed Forces. On March 7, without telling me anything, he went to the army recruiting office and passed the medical examination. And the next day, he had joined the ranks of the defenders of our country," she recounts.

Olga has fully supported her husband’s decision and is very proud of him.

"Nowadays, air raid sirens are constantly sounding all over Ukraine, and my hometown is being hit with missile strikes, as well. Every day, you don't know if you will get to see tomorrow. Fear. Worrying about my husband, my children, and my own life. Grieving for those who were killed. I don't wish this experience on anyone. In the meantime, we cancer patients really need help getting medicine. We all want to live to see our victory!" Olga says with determination.

"Athena: Women Against Cancer was created to advocate for the rights and interests of cancer patients and unites cancer patients from all over Ukraine," says Viktoriya Romanyuk, the vice-president of the organisation.

"Our organisation has existed for almost 5 years. Its main goal is to ensure free access to high-quality medical services and medicines for all cancer patients. There is a reform of Ukraine’s healthcare system underway. Basic chemotherapy drugs are purchased with state funds. However, the innovative drugs, without which many types of cancer cannot be treated effectively, patients are forced to pay out of pocket, or to go without care at all. This year, we had high hopes that the list of drugs purchased by the state would be supplemented with innovative drugs. But the war began, and now the main task is to preserve at least what we have. Many patients are currently being treated in European countries, and Ukraine is receiving humanitarian aid in the form of drugs provided by the international organisations and drug manufacturers. This is great support for our patients during these difficult times. And we are very grateful for it."

The Second Front: How Ukrainians Are Fighting Cancer During The War