November 13, 2022
On November 11, Ukrainian troops entered Kherson (a southern city which had been under Russian occupation since the beginning of the full-scale invasion). Local residents decked the city in blue and yellow flags and tore down posters with the inscription "Russia is here forever." 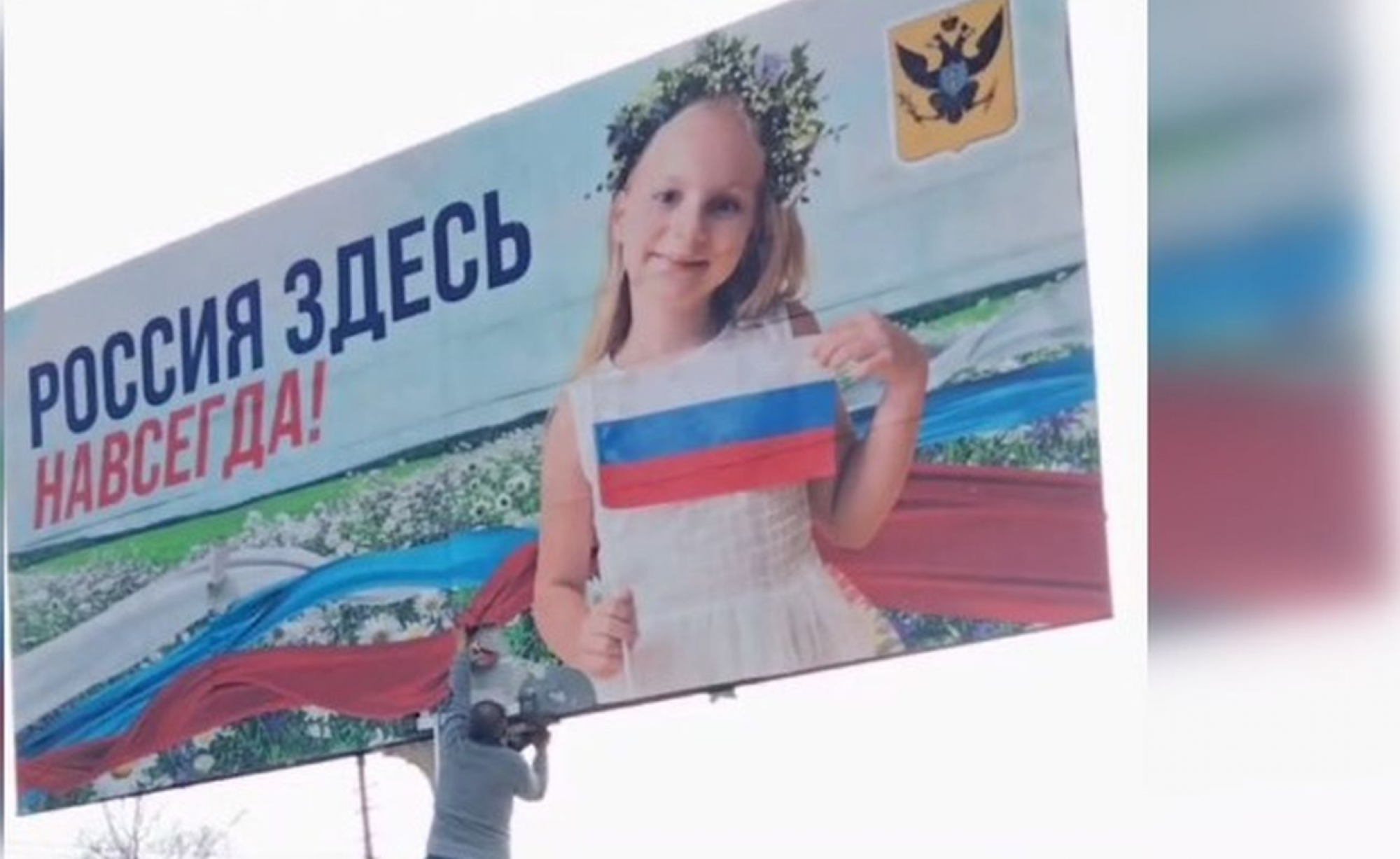 On September 26, 2022, Russia illegally held “referendums” in four temporarily-occupied territories of Ukraine, including the City of Kherson and Kherson Oblast. Having conjured fictitious results, on October 4, Russia’s President Putin quickly issued a fictitious order to join this territory "to the Russian Federation."

According to Russian TV propaganda , Russia’s President Putin declared at the annexation ceremony that residents of the occupied regions of Ukraine "become our citizens - forever." 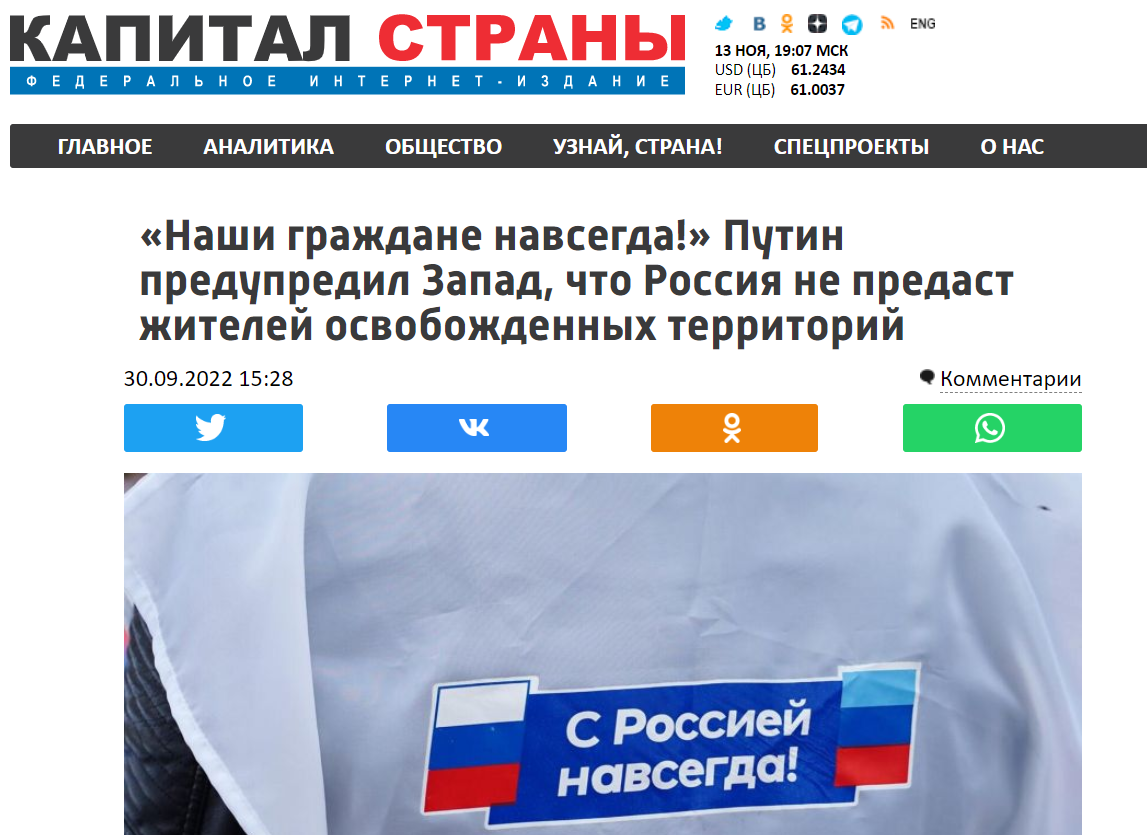 In response to the successful Ukrainian counteroffensive in the south of the country and the liberation of towns and small cities on the right bank of the Dnipro River, Russian media announced the deportation of local residents, calling it a “mass transfer of the population of the Kherson region to the left bank.”

Claiming that "there is no panic," on October 18, the head of the Russian occupation administration, Vladimir Saldo, announced these deportations, referring to the threat of "attacks by the [Ukrainian] Armed Forces" and "undermining of the Kakhovska HPP". 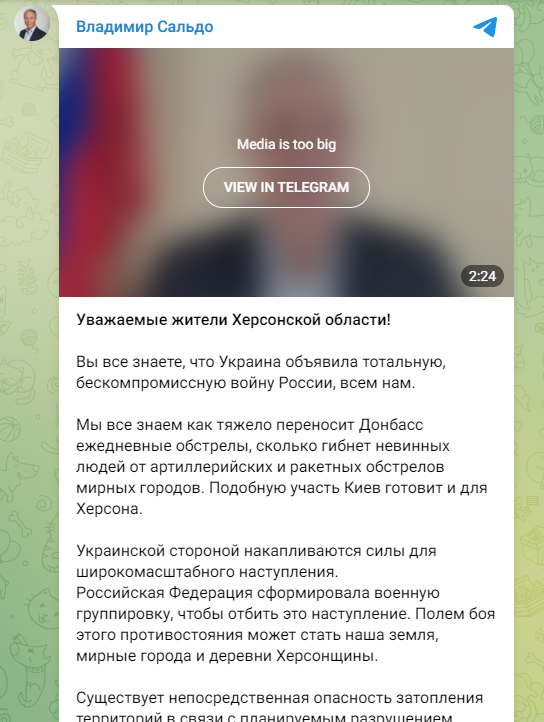 On November 9, Russian evening news began with a report from Russian commanding general Sergei Surovikin to Defense Minister Sergei Shoigu. In this report, Surovikin underlined that Russian troops would need to relocate to the left bank of Dnipro in Kherson Oblast in order to “save Russian soldiers’ and civilians’ lives”as Ukrainian troops were “firing indiscriminately at the city, possibly using prohibited methods of warfare.” 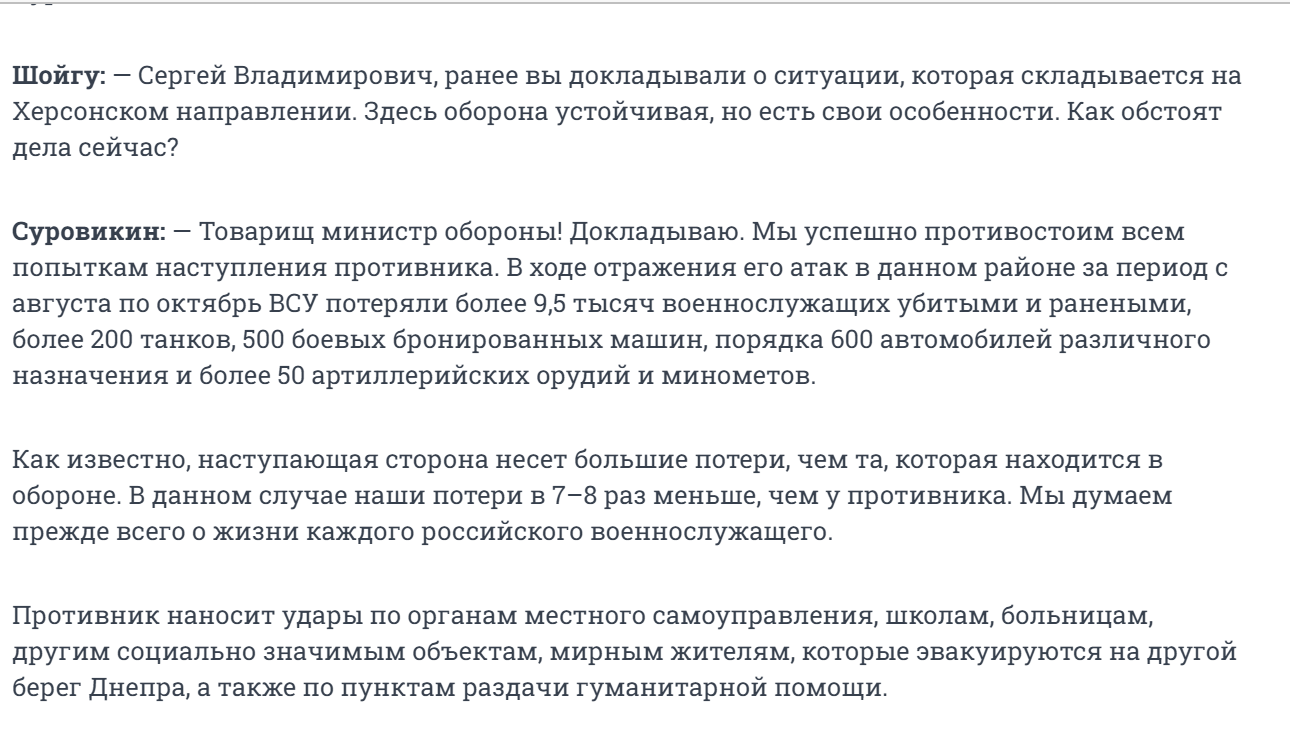 According to Russian media, the Russian army moved to the left bank of the Dnipro river “without losses.” Furthermore, they consistently assured audiences that that Russia was preparing to “defend Kherson remotely.” 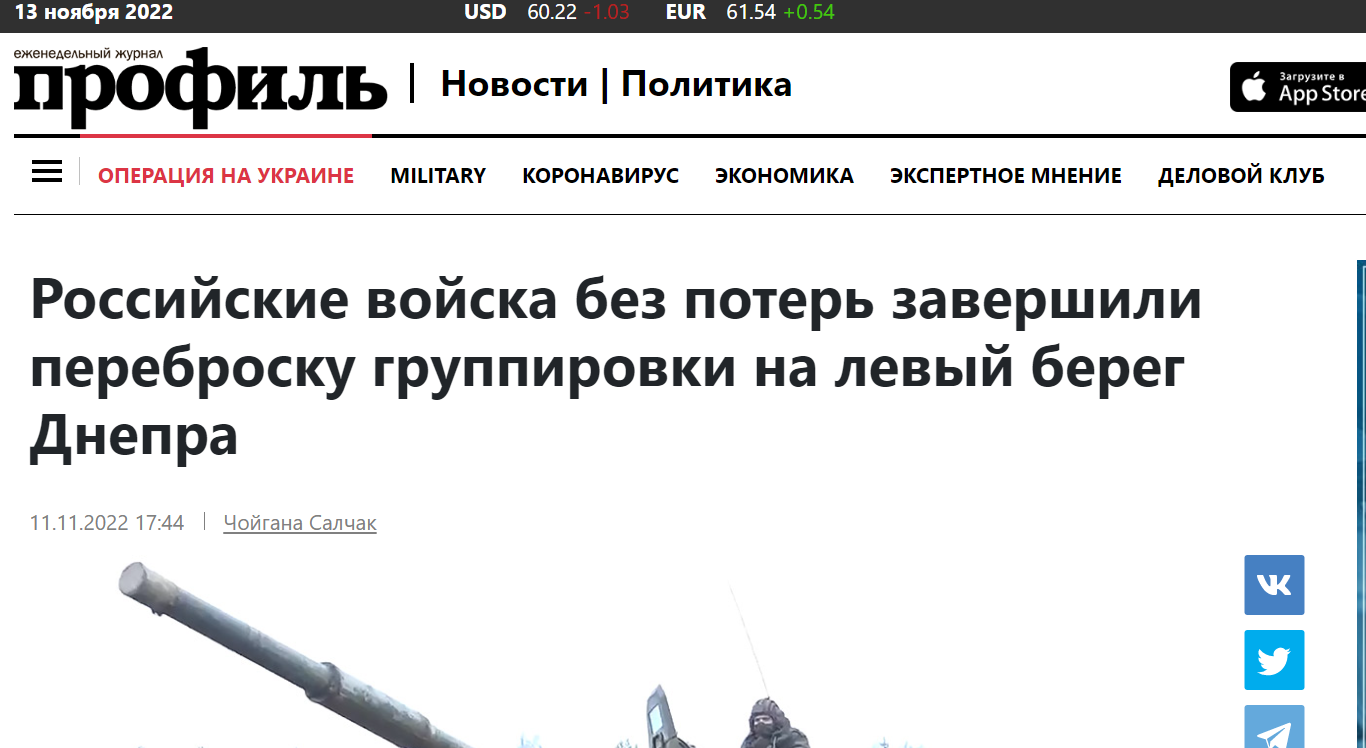 This is how the Russians have tried to explain their escape from the southern Ukrainian territory as "taking up the defence on the left bank of the Dnipro."

At the same time, even after the “relocation” (meaning retreat) of Russian troops and the entry of the Ukrainian army into the City of Kherson and Kherson Oblast, Russia’s presidential press secretary Dmitrii Peskov insists that "the status of this subject of the Russian Federation has not changed"– that is, he continues to recognize the annexation of Ukrainian territory as permissible under the Russian Constitution, contrary to international norms. 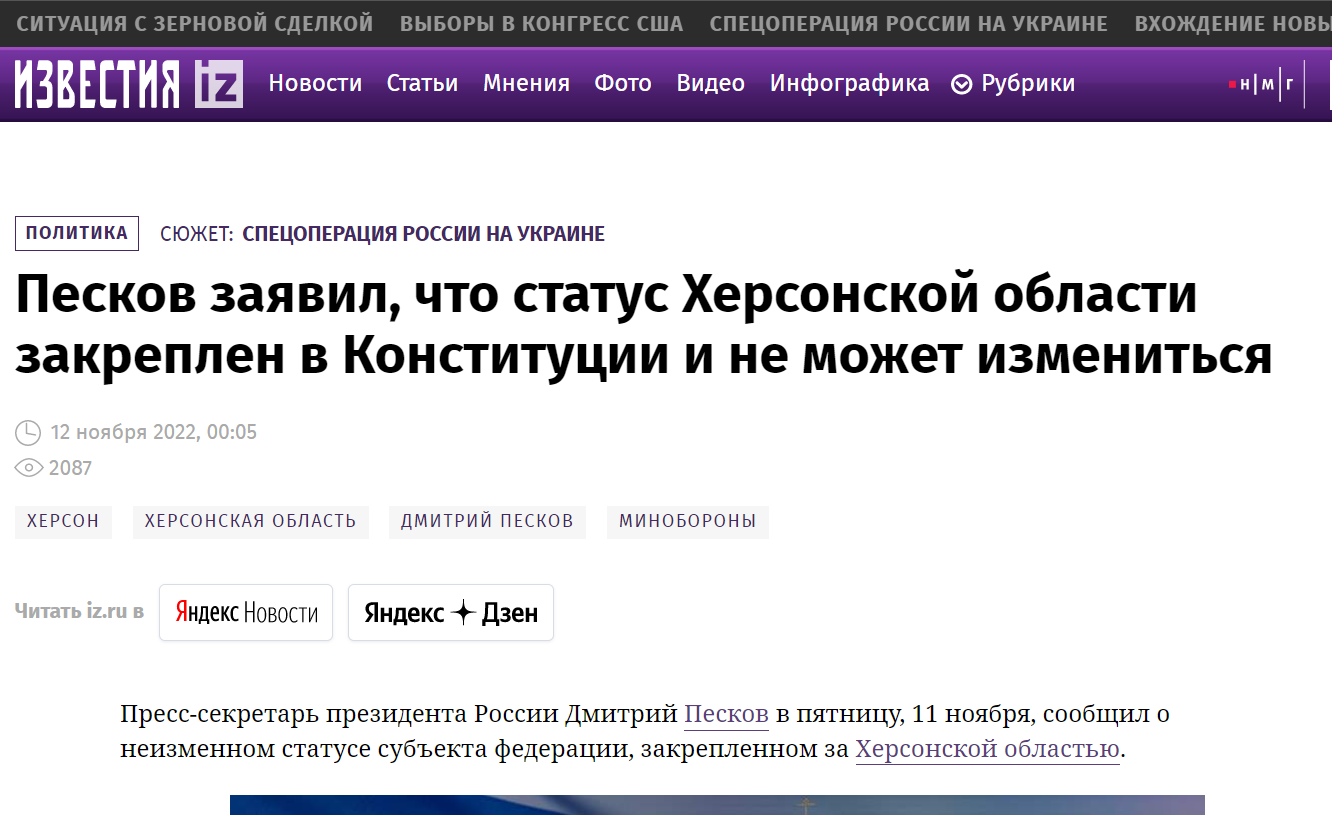 On November 11, Ukraine’s President Volodymyr Zelenskyy visited parts of liberated Kherson Oblast to show support for his military’s efforts and meet with local residents. The Russian media, of course, reacted with outrage to the Ukrainian president visiting Ukrainian territory, calling it a “Kyiv provocation.” When asked to respond to Zelensky’s visit to his country’s liberated territories, Russian presidential press secretary Peskov could think of nothing beyond “no comment” "everyone knows that this is the territory of the Russian Federation." 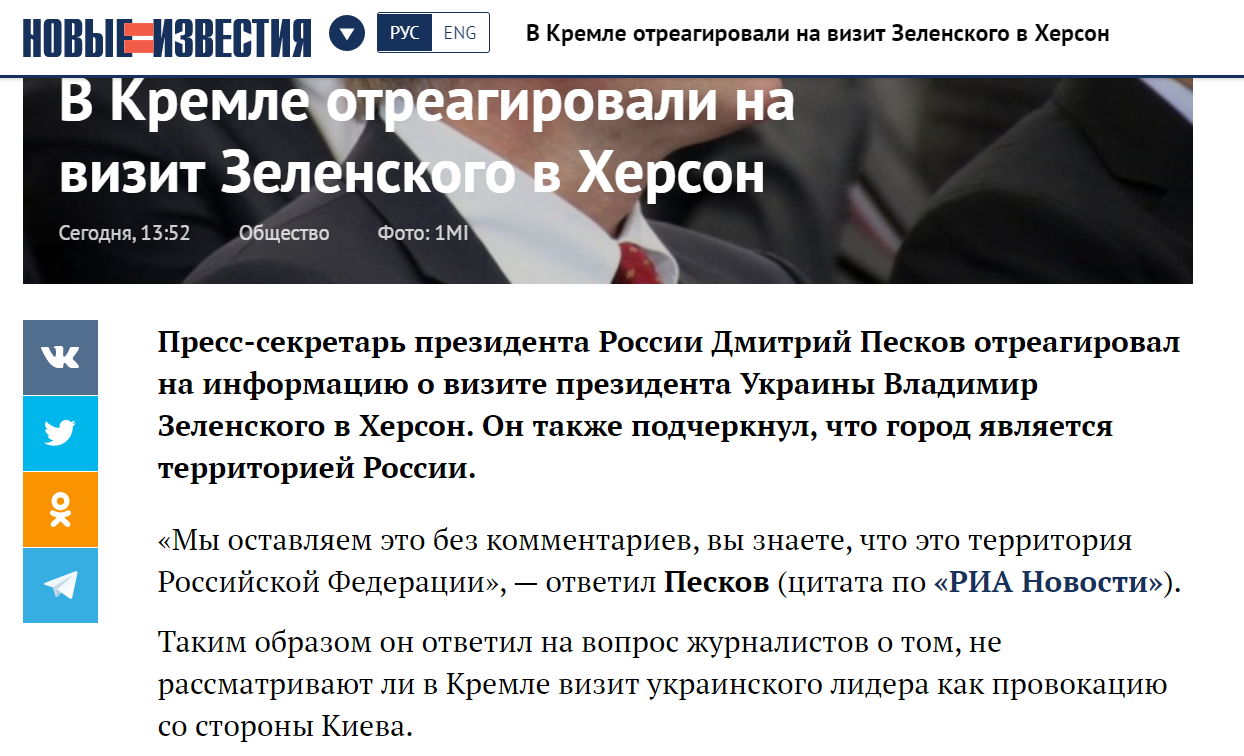 It seems that the Ukrainian Armed Forces are liberating Ukrainian territories faster than the Russian propagandists have time to create new explanations for their actions.

Is Russia a Victim of the West?

Since the Russian invasion became a protracted war that it cannot win, state propaganda has been looking for reasons to justify the invasion. Have a look at Russian...
PODCAST
September 10, 2019