June 4, 2020
Influenced by politicians, yet also relatively free. Dependent on big oligarchic capital, but competitive. There are many “yets” and “buts” when it comes to Ukraine’s media sphere. It had to be built from scratch after Ukraine gained independence from the Soviet Union in 1991. This process has resulted in many unique features. 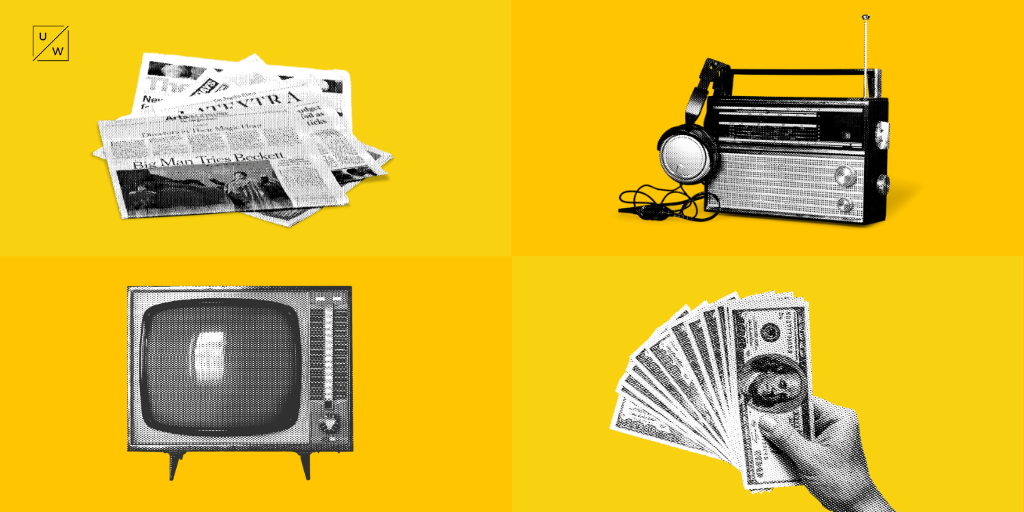 Internet or television for news? Ukrainians love both, but tend not to favour radio or print media. According to research conducted for Internews Network by InMind, 68% of Ukrainian respondents use social networks to get news and 59% use news websites, while about 66% get their news from television . Meanwhile, print media is in decline. Only 15% of respondents use print media at least once per month. Radio is hardly in a better position, with only 18% of Ukrainians having it as part of their monthly news diet.

This state of affairs can be partially explained by financial reasons --- TV channels, news websites and social networks offer news for free. At the same time, there are also global trends of growing digital media dominance.

Regarding public trust in media, the most trusted news sources are online outlets,  with 51% of respondents trusting them. TV channels were trusted by 49% of respondents, while 22% and 19% trust radio and print media, respectively. This is caused by increased disinformation and by the way different oligarch-owned media outlets promote the interests of their owners.

The Game of Oligarchs

Ukraine is ranked 96th of 180 countries in this year's World Press Freedom Index issued by  Reporters Sans Frontiers (RSF).  "Much more is needed to loosen the oligarchs' tight grip on the media, encourage editorial independence, and combat impunity for crimes of violence against journalists," the RSF report reads.

Indeed, Ukraine's news industry has been dominated by oligarch-owned media since the 90s. In order to understand the origins of this, we first must understand how the oligarchs emerged.  Serhii Plokhy, a prominent Ukrainian-American historian, explains in his book "The Gates of Europe: A History of Ukraine" that oligarchs "emerged as the main beneficiaries of the second stage of privatization [after the Soviet collapse], which amounted to the sale of government assets at a fraction of their actual value."

As oligarchs made their fortunes in the 90s, they also got into politics in order to get an edge over their business rivals. "The 'oligarchization' of the Ukrainian economy coincided with the end of economic decline. Ukraine began the new millennium with a rapid economic recovery, and, for better or worse, the oligarchs were important figures in that new success story," Plokhy writes. The news media has always been essential in establishing this success story. Some of the key oligarchs who own major media outlets today --- Rinat Akhmetov, Viktor Pinchuk, and Ihor Kolomoyskiy --- started building their media empires more than twenty years ago. This has led to all ten of the most popular TV-channels being oligarch-owned.

At the same time, competition between various media holdings (as the interests of their owners often differ) facilitates substantial media diversity. Talk shows on some TV channels are rather inclusive and provide opportunities for various politicians and public figures to speak.

Additionally, more or less independent media like Ukrayinska Pravda, Hromadske.ua, Hromadske Radio, Novoe Vremia, Krayina and Tyzhden magazines, as well as media projects like Detektor.Media, StopFake, UkraineWorld, and others stand in the way of efforts to monopolise the Ukrainian media sphere. 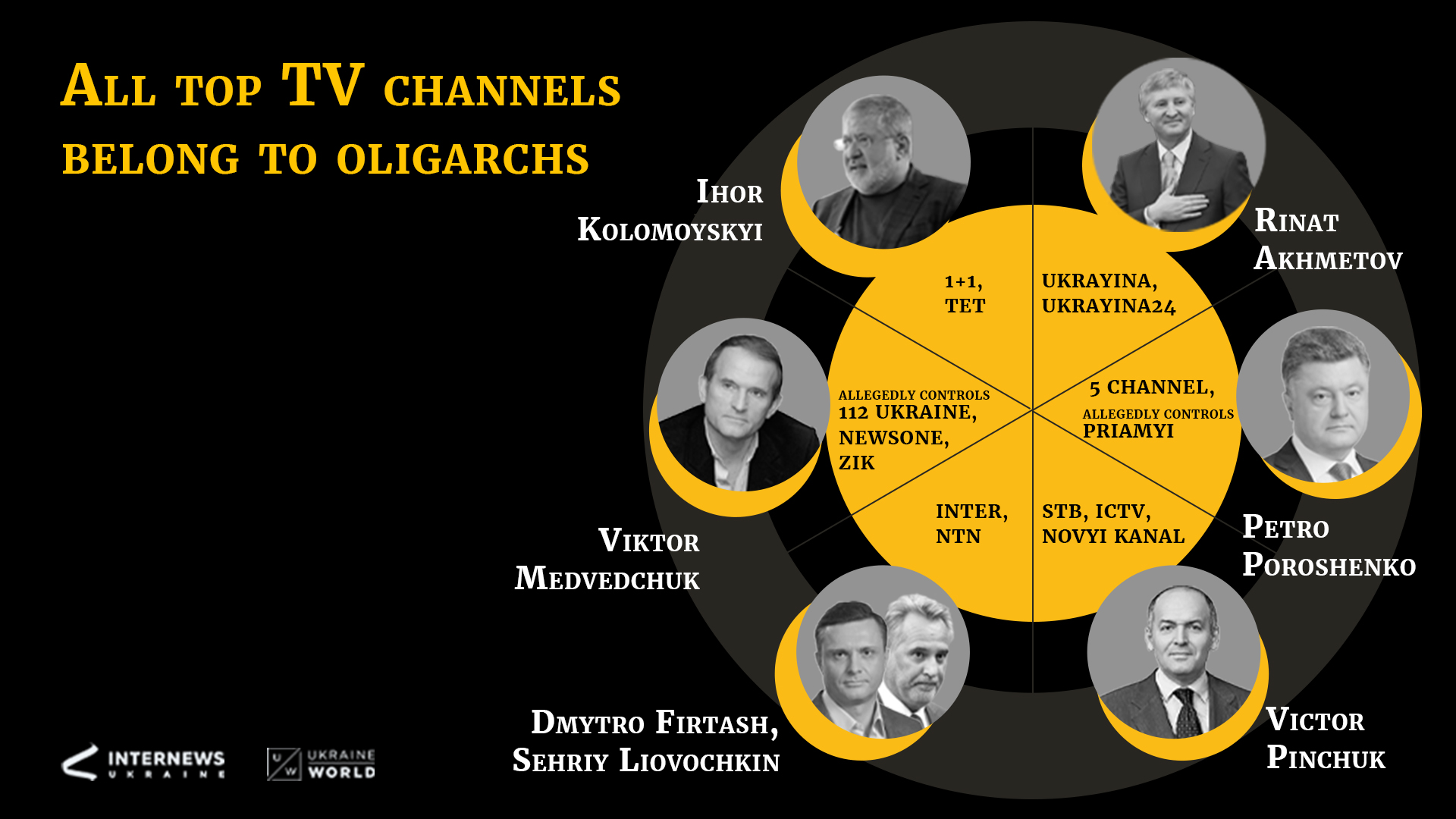 The lack of alternatives is another major reason for the success of oligarch-controlled media. State-owned media have been underfinanced and understaffed ever since Ukraine's independence, as oligarch-owned media fought for audiences. Unlike most European countries, Ukraine lacked an influential public broadcaster for a long time.

The National Public Broadcasting Company of Ukraine (Suspilne), the only public broadcaster, was officially launched only in January 2017 after years of development. Sadly, it emerged into a landscape which had already been divided by different oligarch-owned media groups long ago.

Another problem is that the financing of Suspilne is allocated from the state budget. According to the "Law On Public Television and Radio Broadcasting," Suspilne is supposed to receive 0.2% of the state budget annually. This puts  Suspilne's fate in the hands of the government, and has led to Suspilne being severely underfunded to the point where it barely has enough money to cover real estate costs in Kyiv and the regions and to pay minimal salaries and expenses for broadcasting. There have been almost no funds for the production of content or for modernisation of equipment.

On the one hand, it looks as if Suspilne will only gain traction when it offers a true alternative to oligarch-backed media content. On the other hand, the government's current financing policy all but ensures that this will never happen.

The annexation of Crimea by Russia, the ongoing war in Donbas, and Russia's disinformation campaign against Ukraine and the West have had a huge impact on Ukraine's media.

First of all, Ukrainian websites and social networks have been bombarded with fakes and manipulations. Social media and online sites are effective tools to disseminate fake news and manipulations. Hence, Russia employs troll factories and bots automated systems to affect public discourse. Facebook and Twitter frequently delete bot accounts, pages, and groups for domestically-focused coordinated inauthentic behaviour in Ukraine, but new ones emerge quickly. Nevertheless, the main activity of disinformation networks these days seems to have shifted to Telegram, where there is almost no control.

Coordinated information manipulation isn't just limited to social networks. Texty.org.ua have discovered a huge segmented ecosystem of "junk websites," according to their report,  "We've Got Bad News!" The reporting shared by such outlets is often of very low quality or even completely fake, but the outlets still garner around 50 million visitors each month. In comparison, "Ukrainska Pravda" (a popular legacy news service) reaches around 15 million visitors. Hundreds of thousands of people read "junk news" daily, according to the report.

The last year has shown an increasing trend of pro-Russian revanchism in the media. Victor Medvedchuk, the godfather of Russia's President Vladimir Putin's daughter, is one of the leaders of the openly pro-Russian Opposition Platform---For Life party. Over the past few years, he has concentrated several information TV channels under his control and used them to spread pro-Russian and anti-western narratives. Internews Ukraine and UkraineWorld.org publish a regular roundup of these narratives and cover specific narratives when they appear.

The main line of defence against Russia's information manipulation is Ukrainian civil society. There are a number of civil society organisations which either  fact-check or monitor Russian disinformation and spread the word about it around the world. At the forefront are StopFake, UkraineWorld (a project of Internews Ukraine), Hybrid Warfare Analytical Group (a project of Ukrainian Crisis Media Center), and Po Toy Bik Novyn (Behind the News, a project of the Regional Press Development Institute).