June 9, 2021
Ukrainian folk music is getting more and more world attention and recognition. It is multidimensional, so we’d like to tell you all about it! 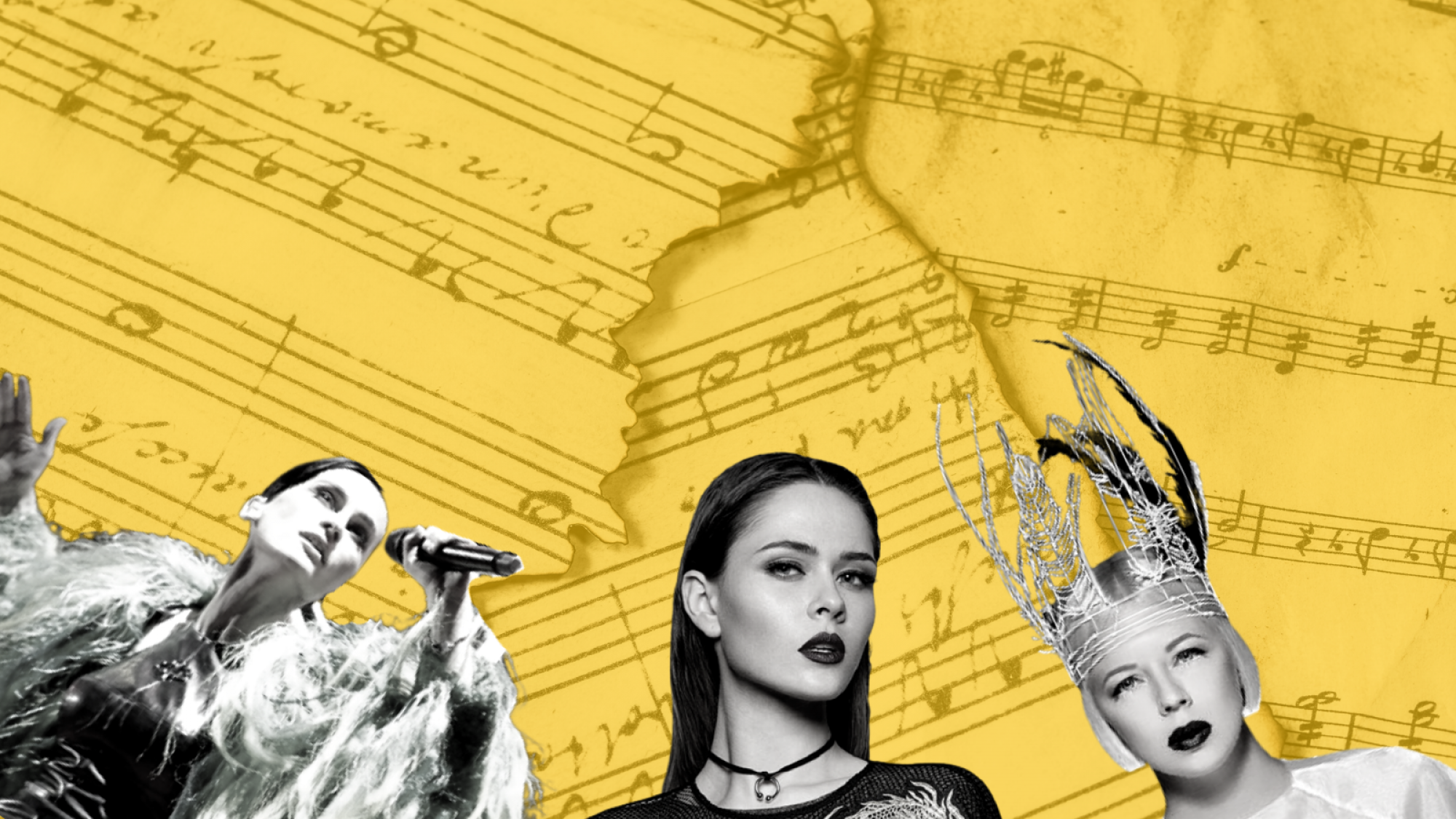 Folk motifs on the Ukrainian stage have been in use since long before independence in 1991. However, during Soviet times, it was only played in the form allowed by the authorities. In recent years, folk music has been rediscovered by a new generation of Ukrainian performers. They have started mixing folk with electronic music, rap, rock and other musical styles proving that Ukrainian music is a truly special phenomenon. Check out our list of prominent Ukrainian ethno bands that are definitely worth listening to.

We start with the folk music quartet DakhaBrakha. It combines the musical styles of several ethnic groups. The band was founded in 2004 at the DAKH Centre of Contemporary Art in Kyiv by avant-garde theatre director Vladyslav Troitskyi, who now serves as their producer.

The group's name derives from Ukrainian verbs daty and braty, which mean "give" and "take", respectively.

DakhaBrakha has played concerts and festivals in Ukraine and around the world. Their songs have been widely recognized and used by foreign audiences. Their music was featured in a commercial for David Beckham’s grooming products, and one of their songs is on the soundtrack of the popular TV series “Fargo” produced by American filmmakers Joel and Ethan Coen.

You can also read about these bands in our article on how current Ukrainian culture combines tradition and modernity.

Members of DakhaBrakha participate in other projects by the DAKH Centre, notably in the all-female cabaret project Dakh Daughters. This group of seven actresses from the DAKH Theatre create musical performances on love, freedom, and beauty.

While performing, they rapidly shift from one set of emotions to another.

This unique group experiments with rhythms and pauses.

Kozak system is a Ukrainian band which frequently represents Ukraine at European and world music festivals.The band was founded in 2012 by several former members of the Haidamaky music band.

In 2015, Polish media named Kozak System the most famous band from Ukraine.

The group’s music is a combination of rock, punk and ska, which presents an energy of lyrics and an explosion of every instrument. Their concerts feature spontaneous interactions with the audience, dancing, solos and stage scenes that cannot be replicated.

In addition to promoting Ukrainian cultural and musical heritage, the band stands for independence and freedom.

They have performed numerous times to support Ukrainian soldiers at the front line. Last year they released a music video for a song titled “To the Heroes” in support of people protesting in Belarus, together with other Ukrainian rock bands.

Joryj Kłoc is another Ukrainian ethno music band from Lviv which formed in 2008. The name of the band is derived from , an argot used by blind lyre players and kobzars, who had their own laws and chronicled heritage, which stretched back ages and continued until the 1930s. In that secret lyric dialect, the word “joryj” meant “respectful”, as well as “crazy” and “obsessed”, while “kłoc” means “a lot”, “a piece”, or “a man”.

The group uses Ukrainian in the Latin alphabet as one of the elements of their creative work.

The band combines rock and roll with ethnic motifs using traditional Carpathian musical instruments. It has taken part in various music festivals in the country and abroad.

Folknery is a Ukrainian free folk band, founded in 2009 by Volodymyr Muliar and Yaryna Kvitka. The duo travel around Ukraine and other countries by bicycle, gathering traditional folk songs and recording them with additional musical elements.

According to Muliar, during the cycling trip to Abkhazia back in 2009, William Faulkner came to him in a dream, suggesting that the group use his surname as a name of the band. By an amazing coincidence, the pronunciation of the last name resembled the word "folklore", the subject of the band's music.

The band calls their travels “Two-wheeled chronicles”, as they travel everywhere by bicycle, exposing themselves to new cultures, traditions and unusual places.

ONUKA is a Ukrainian electro-folk band created back in 2013 by Ukrainian musicians Yevhen Filatov and Nata Zhyzhchenko. The band includes members who play musical instruments like electronic drums, the trombone, French horn, as well as the Ukrainian folk instruments bandura and sopilka.

The Ukrainian word ONUKA translates to "granddaughter", The name of the band is a tribute to lead singer Zhyzhchenko's grandfather and renowned folk-instrument maker, Oleksandr Shlionchyk.

“Ukrainian music has met with great success abroad! There is genuine interest in Ukrainian music everywhere. Of course, it is a very nice experience, but it heightens our responsibility as well. The message coming from musicians is very cool already, and you need to outdo them. Ukrainian art has set a high bar to clear. When we perform in Ukraine in front of our audience, it is one thing. When we arrive abroad, however, we have to win the vast majority of the audience as if it was our first time. It is like a test each time. Foreigners are curious about our Ukrainian instruments, and their particular sound surely serves its purpose,” Zhyzhchenko explained in one of her interviews.

Hych Orchestra is a Ukrainian band from Lviv which plays its music in a gentle and extravagant way. They also sing songs using the verse of Ukrainian poets such as Pavlo Tychyna and Volodymyr Sosiura, create compositions, and portray folk art in new and experimental ways. The name “Hych”, according to the Etymological Dictionary of the Ukrainian Language, is borrowed from Turkic languages ​​and means "absolutely (not)".

The Doox creates modern music with elements of traditional songs and ethno-rock. Their songs always feature both male and female vocal solos, as the band considers this to be a classic trait of Ukrainian songs.

In Ukrainian rock and contemporary music in general, it might be difficult to find anyone ready to beat Hardkiss. Yulia Sanina's magnetic voice, as well as the quality of the sound, go beyond time and space.

The band is known for its costumes, vibes and entourage.

The band also incorporates folk motifs in its songs, as well.

Last but certainly not least, there’s the Ukrainian representative at the 2021 Eurovision song contest — Go_A, who wowed audiences across the world with their performance. It is a Ukrainian group founded in 2012 that combines classic Ukrainian vocals, modern electronic dance music and a powerful guitar drive with the gentle melody of the sopilka.

Their song “SHUM”, an ancient pagan song sung to awaken spring, recently ranked 1st on TOP Spotify Trends. Find out more about the band and its frontwoman Kateryna Pavlenko in her recent interview.

Analyst and journalist at UkraineWorld and Internews Ukraine

Today’s Ukraine has strong ties with Medieval Rus’, both politically and culturally. Our new video, produced together with the Ukrainian Institute, tells more about...
PODCAST
October 6, 2020