July 14, 2020
Due to the coronavirus pandemic, travel restrictions have been imposed all over the world. Therefore, we decided to share with you some safe places in Ukraine where you can travel with minimal risk during the pandemic and the floods in Western Ukraine. We also picked up places with few COVID cases and which are usually less crowded. 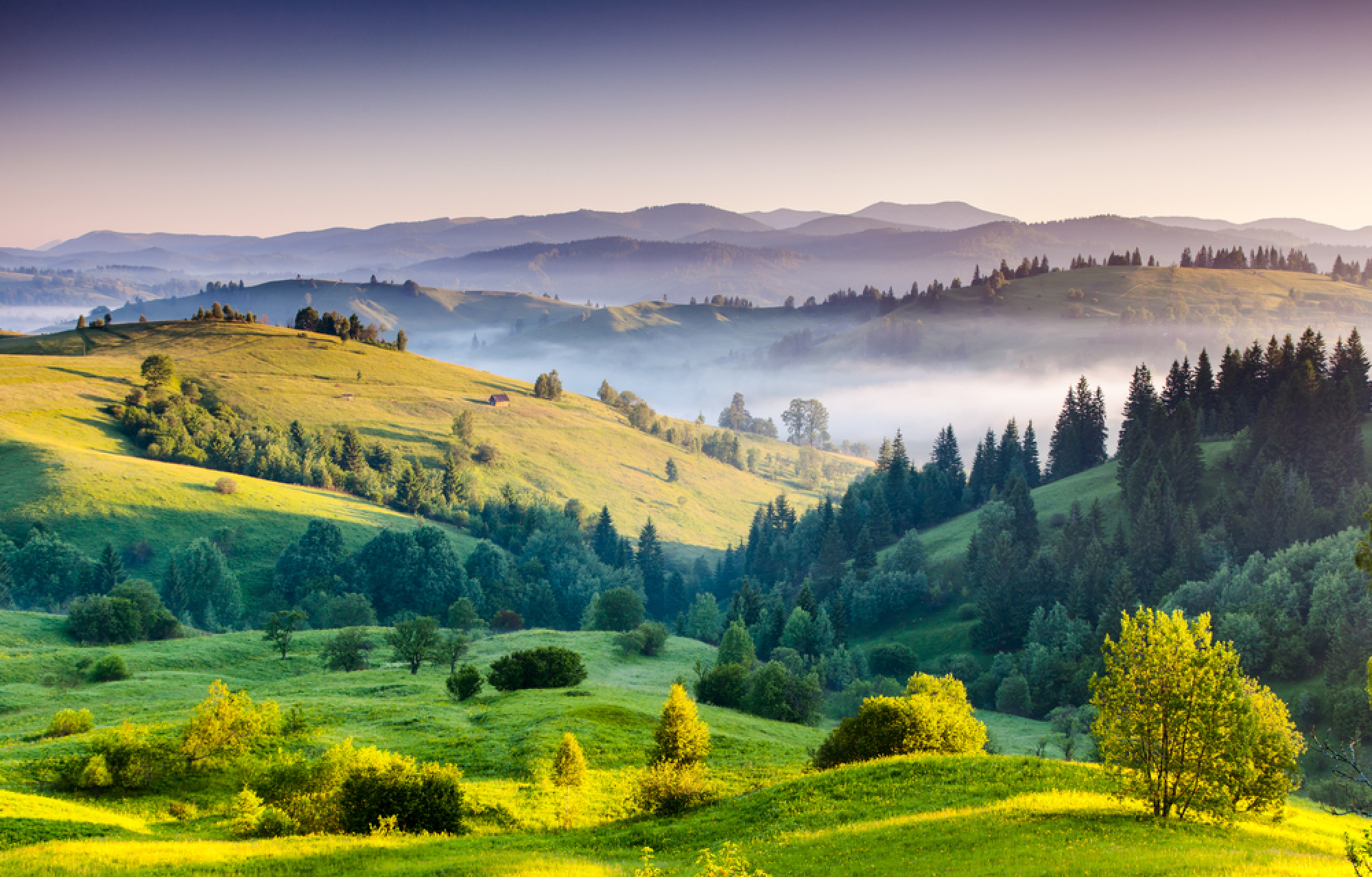 Mykolaiv Region is well-suited for recreation — it has the longest in-city waterfront in Ukraine, and Southern Buh River’s large breadth is ideal for sailing and other aquatic activities. There are also a number of sites for tourism. 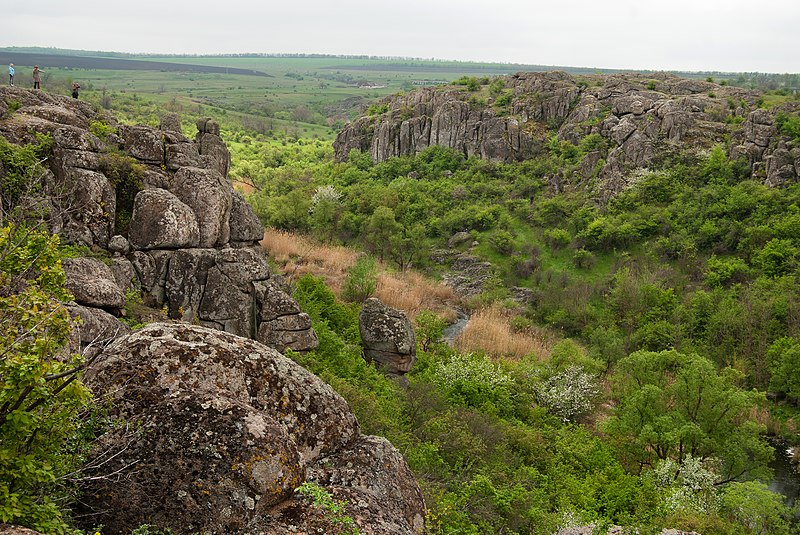 Have you always wanted to see the Grand Canyon, but has never had the chance to do so? No worries! You can go see Ukraine's  Aktovskyi Canyon [GPS coordinates here] during your pandemic summer. Get ready to admire a unique natural wonder, as the Canyon occupies 250 hectares of land and is located near the village of Aktove, whose name it bears. With its great size, you will definitely be able to find breathtaking views and rich flora. You can also have a look here to find out the best route to take.

Mykolaiv Region has even more places of wild and unique natural beauty. There is another canyon located 320 km from Kyiv and is called South Buh River Canyon [GPS coordinates here] which is perfect for rafting. Check out the best route here.

The last place on our list for Mykolaiv Region is the Kinburn Spit Regional Landscape Park, [GPS coordinates here] a nature reserve which consists of sandy plains and coastal landscapes. It is home to many species of flora, fungi, and fauna, some of which cannot be found anywhere else in the world. In ancient times, the famed sea route known as "The Path from the Vikings to the Greeks" passed through the spit. Kinburn's natural environment is ideal for seaside vacationing, therapeutic mud baths, fishing, mushroom picking, for studying nature, and active recreation. The best route to the Park is here.

Kherson Region is also located in the southern part of Ukraine. It is the only region of Ukraine which has access to both  seas, the Black Sea and the Sea of Azov. It has 200 km of sandy beaches and 80 objects of nature reserve fund. 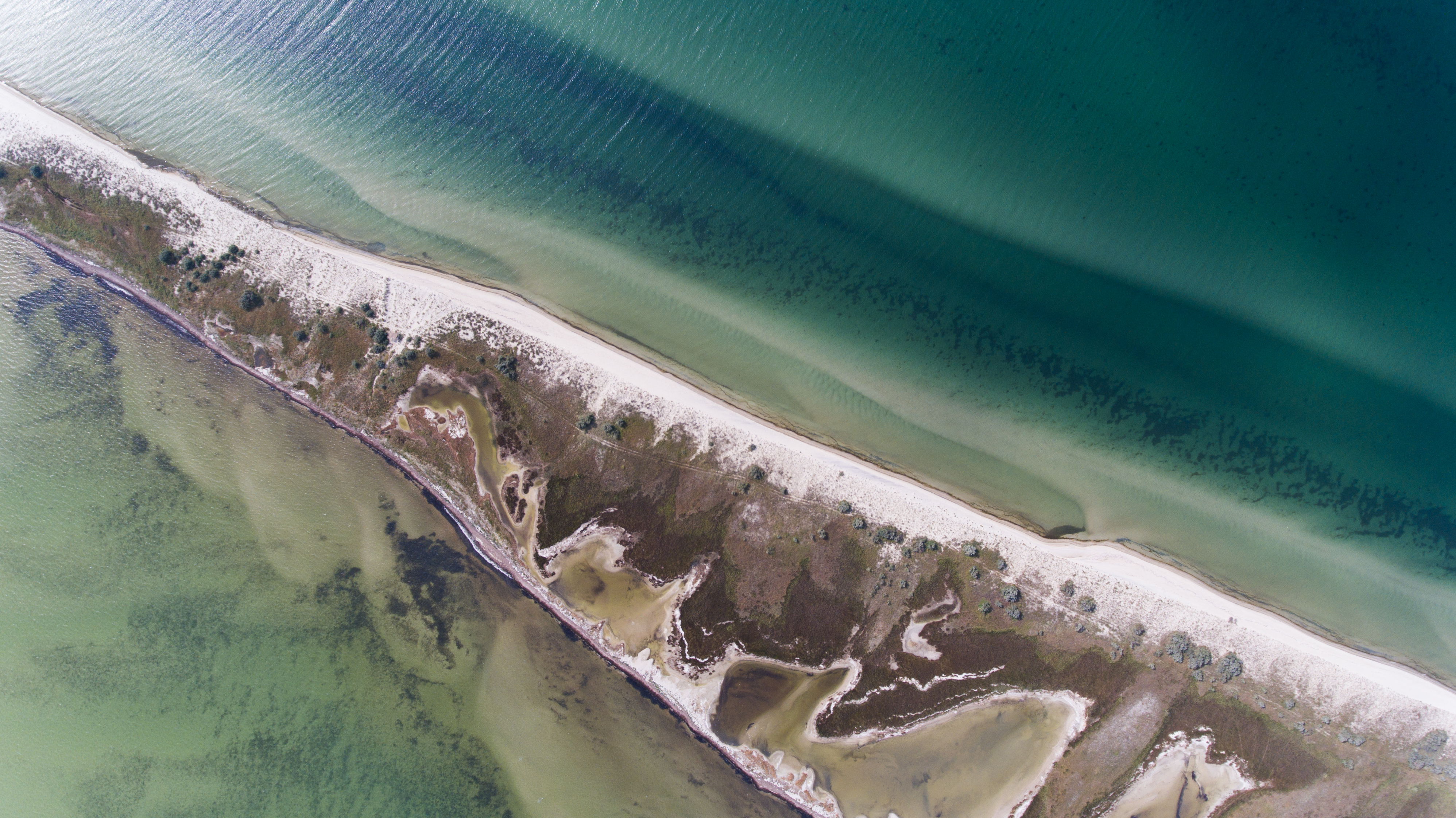 Specific attention should be paid to Dzharylgach Island [GPS coordinates here], which is Europe's largest uninhabited island. Dzharylgach Island (from a Turkic word for "burnt wood") is located in the Karkinitskyi Gulf between Crimea and the Ukrainian mainland. Covering an area of 56 square kilometers, it is the largest island in the Black Sea and Ukraine in general. The climate on the island is temperate continental, typical for the Ukrainian steppe, but is more mild, thus offering favourable conditions for recreation. An interesting sight of the island is Dzharylgach lighthouse, designed by Gustave Eiffel. The island is also known for its curative mud and salt lakes, where the water has a high content of iodine and bromine. The air itself is rich. The best route to the island can be found here.

The Arabat Spit [GPS coordinates here] - the world's longest sand spit, was formed from sand and shells only a few centuries ago. The Arabat part of the name presumably comes from the Arabat Fortress, a 17th-century Turkish fort at the southern end of the spit. "Arabat" derives from either Arabic "rabat," meaning a "military post," or Arabic "rabad," meaning "suburb." The land was uninhabited until 1835, when a road was built through it for postal delivery. Later in the 19th century, 25 rural and 3 military settlements, as well as a village named Arabat, appeared on the spit. The rural population amounted to some 235 people mostly engaged in fishing, farming, and salt production. Salt production in the 19th century provided about 24,000 tons per year on the Arabat Arrow alone. Nowadays, the spit is a health resort and its Azov Sea side is used as a recreational beach. Check out the best route to this site here.

Lemuriysky Lake, or "The Dead Sea of Ukraine," [GPS coordinates here]is another place of stunning beauty, as the lake has a unique pink colour. The concentration of salt in the water reaches 27-30% (compared to 30-35% in Israel's Dead Sea).Interestingly, this unique place was discovered only by accident. In the late 60's, a military plane supposedly went down in the  area and a huge funnel from it started filling in with water. This place is now used  as a health resort. It is also worth noting that the water in the lake sometimes recedes, and you can find yourself on a beach with pink salt. If you choose to visit this unique spot,  check out this link to find your best route.

Zaporizhzhia Region is one of the largest administrative, industrial, and cultural centers of southern Ukraine. There are thus many fascinating places to see.

The first place for sightseeing in this region is Khortytsia Island [GPS coordinates here], the largest island on the Dnipro River. The total area of the island is about 2,500 hectares. Above all, Khortytsia is a fascinating historical place because of the famous Cossack settlement called Zaporizhzhian Sich built there in 1556, and some parts of its fortifications remain. Nowadays, the island is a historical and cultural complex. That is why this is the best place to visit if you want to plunge into the atmosphere of that era and learn more about everyday life of Ukrainian legendary warriors. Here is the best route to reach it. 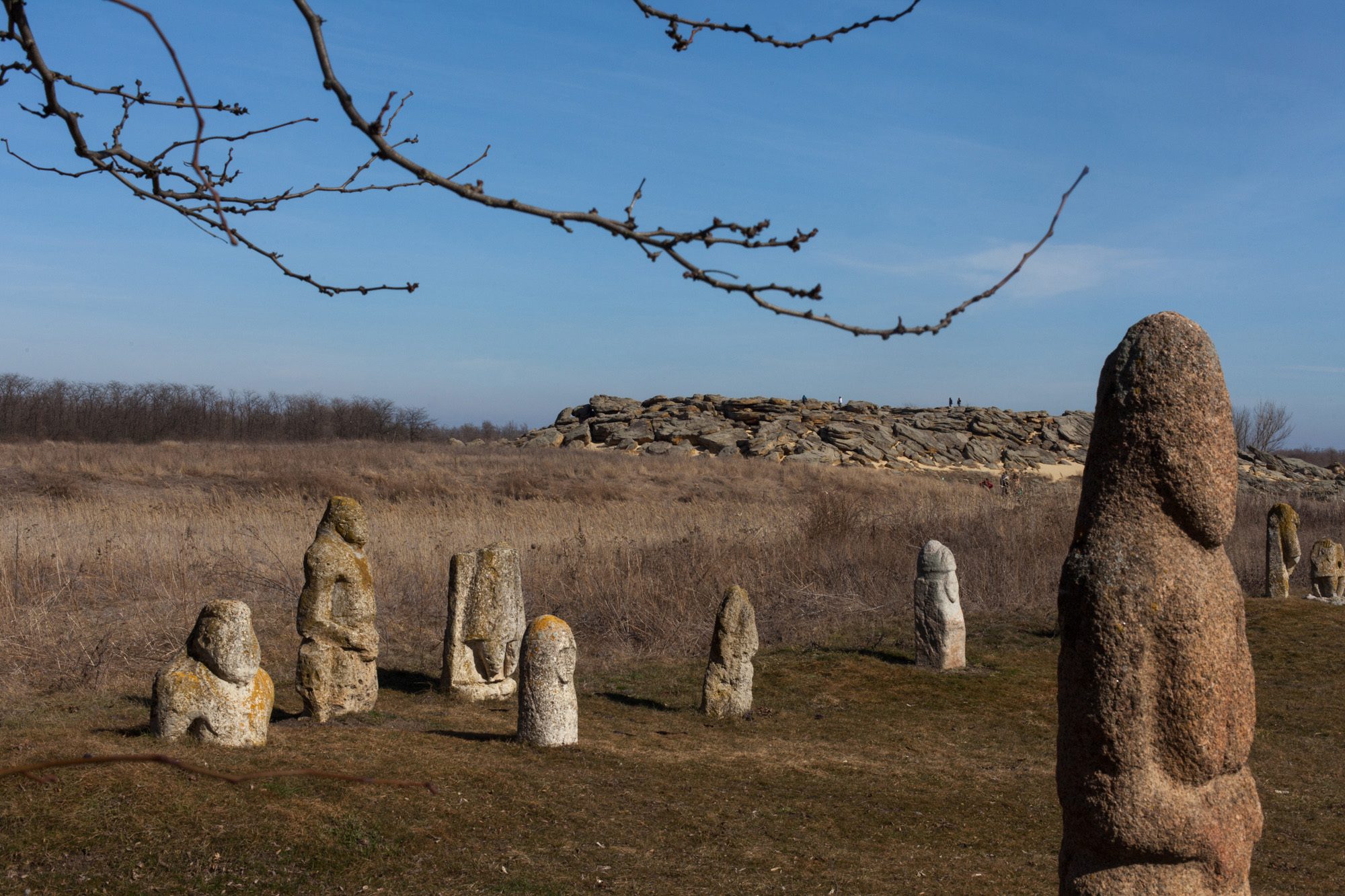 The second place in Zaporizhzhia Region is the - Kamyana Mohyla or the Stone Tomb [GPS coordinates here].It is an exceptional place for tourists with stone carvings that are older than both the Pyramids of Egypt and Stonehenge in the UK. The rock carvings here in this place date from the Upper Paleolithic era,  to the Middle Ages. Petroglyphs are found inside the caves and grottoes of Kamenna Mohyla, many of them still filled up with sand. Interestingly, no traces of ancient human settlement have been discovered in the vicinity, leading many scholars to believe that the hill served as a remote sanctuary. In 2006, the government of Ukraine nominated the site for inclusion on the UNESCO World Heritage List, so we encourage you to go see this unique historical site with your own eyes. You can find the most convenient directions to this mysterious place here.

The last location that we want to tell you about is Yelyseivskyi Quarry [GPS coordinates here]. According to legend, it is a unique former deposit of pegmatite, which was mined during German colonization during the reign of Catherine the Great. This pegmatite was an essential raw material for Saxon porcelain factories. Today, the Yelyseivskyi Quarry is a hotspot for things like camping, climbing, and bungee jumping. You can find the best way to the quarry here.

As one of Ukraine's largest seaports and trade hubs with a beautiful historic district Odesa has plenty of fascinating places. The central part of the city is packed with tourist attractions, while architecture lovers can admire the splendid palaces and unique blend of building styles. It is worth noting that Odesa's clubs and beaches have recently been violating the lockdown - so if you visit, it is better to avoid the crowded clubs and beaches located within the city. Instead, we suggest enjoying the architecture while walking around it or going to the beaches in the more remote areas of the city. Moreover, even amid the pandemic, you can still find there open-air places with fewer people.

The Odesa Archaeological Museum [GPS coordinates here] has the largest collection of information sources about ancient history of the Northern Black Sea region. It also has rich collection of archaeological relics of primitive and classical culture, including relics of ancient Egypt, Greece, and Rome. You can check the best route here. 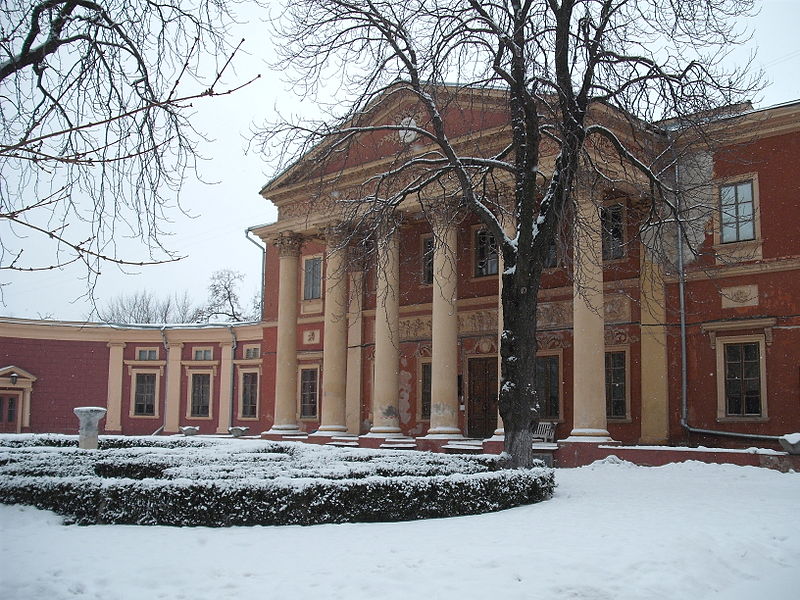 The Odesa Fine Arts Museum [GPS coordinates here] is one of the most beautiful buildings of the city. This unique architectural monument was built in the 1820s in the tradition of Russian classicism. The OFAM collection is considered one of the most significant and diverse in Ukraine. It currently holds more than 10,000 objects of fine art: paintings, drawings, sculptures, icon paintings, and  craft items. Collection highlights include artwork from Ivan Aivazovskyi, Iliia Riepin, Myhailo Vrubel, and many others. It is also worth mentioning that world-renowned Ukrainian painter Olexandr Roytburd is the museum's director. You can find the best way to this fascinating museum here. 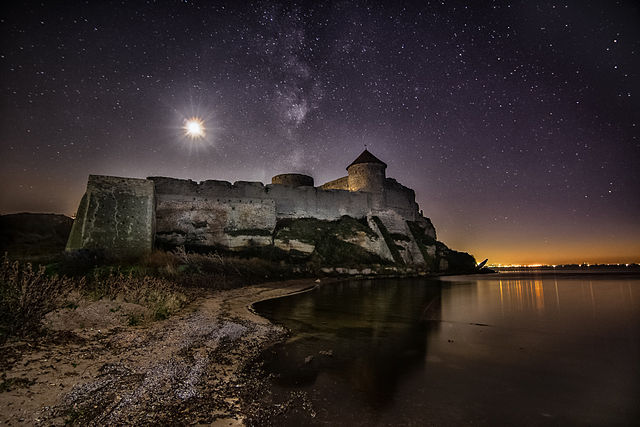 Finally, while leaving the city, you can visit Bilhorod-Dnistrovskyi Fortress or Akkerman Fortress [GPS coordinates here], which is just a two-hour drive from Odesa. It is a historical and architectural monument of the 13 th-14 th centuries. The fortress was built on the remains of Tyras, an ancient Greek city on the northern coast of the Black Sea, which existed until the 4th century. If you want to explore this particular site, check out the best way here.

ANASTASIIA ALIEKSIIENKO
Analyst and coordinator at Internews Ukraine
Next article

Ukraine reopens today after a 17-day lockdown. The country returned to adaptive quarantine measures that were in place before.
VIDEO
June 19, 2019

8 Amazing Cities to Visit in Ukraine

Ukraine is the second largest country in Europe (after the European part of Russia). It has many beautiful cities and towns for you to visit. We have selected...