May 20, 2020
The most recent major development in the telecommunications industry in Ukraine has been the launch of 4G internet. It took place only in late 2018, while most other European countries had introduced this technology 4-5 years earlier. Considering this one might think that Ukraine’s telecom market was underdeveloped and outdated, but that would be far from the truth.

"Ukraine does not stand apart from  global processes, but is rather one of the leading countries in terms of internet access for users and  development of the latest internet technologies," Vitaliy Moroz, Head of New Media at Internews Ukraine, told UkraineWorld. Additionally, in his entry for the Konrad Adenauer Foundation's Ukrainian Media Landscape 2019 report, Moroz writes that "Ukrainian society is quite progressive in innovations' adoption, even today the growth of contactless payments (NFC) is one of the fastest in Europe, and WI-FI technologies availability in public space (cafes, parks, gas stations, shops) can be envied by some EU countries residents."

One of the factors which allow for such a relatively high internet penetration figure is very low cost of services. The average cost of a broadband internet connection is 100-200 UAH (4-7 USD) per month --- higher in big cities and lower in the small towns. Meanwhile, the average price for a mobile tariff with 5-10 gigabytes of 4G internet is 100-120 UAH (4-5 USD) per month. While this is good for consumers, it is a problem for telecom providers. 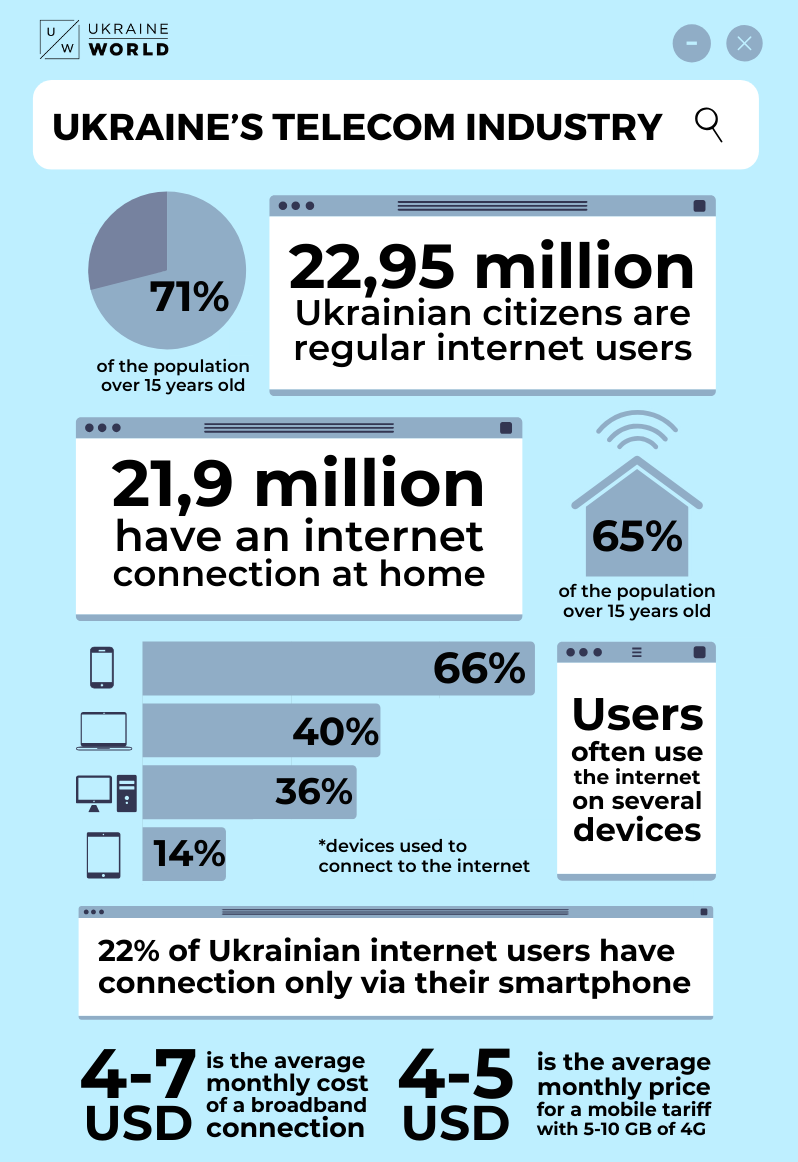 Oleksandr Komarov, CEO of Kyivstar, the leading company in Ukraine's telecom sphere offering both broadband and mobile connection to 26 million customers, told UkraineWorld that the low average revenue per user (ARPU) --- 68 UAH (2,5 USD) for Kyivstar --- makes it take longer for any investments to pay off. "The pay-off period for investments in 4G is ten years, which is longer than in other European countries," Komarov underlined.

Another factor which keeps prices low is the huge competition in the industry.  According to the National Commission for the State Regulation of Communications and Informatisation, there were 1271 telecom services providers in Ukraine as of 5 May 2020. The real number of providers is even higher. In an interview with UkraineWorld, Internet Association of Ukraine boardmember Oleksandr Hlushchenko explained that "[t]he Ukrainian telecom sphere is democratic and inexpensive, but it is special due to the fact that there are "white" legal and "black" providers of services with undocumented networks. In most cases, anyone who wants to start providing telecom services can do so", a board member of the. According to Hlushchenko, competition makes many smaller providers leave big cities and focus on smaller towns and rural areas, thus making the market highly diverse.

Meanwhile, mobile network coverage in Ukraine is more extensive than that of fixed internet connections. Whereas mobile network coverage exists almost in all cities, towns and villages (though  often  slow and unstable in rural areas), major internet providers usually do not reach further than district centers. When it comes to mobile service providers, there are three main players in the Ukrainian telecommunications market---Kyivstar, Vodafone and Lifecell, all of which are privately-owned. They each have 26,4 million, 19,8 million and 6,9 million subscribers, respectively. As the total number of subscribers is 53,1 million---much higher than Ukraine's population (41,8 million)---this means that many Ukrainians have at least two SIM-cards from different mobile network companies.

A common feature of all three companies is their significant share of foreign capital investments. This is due to the fact that the nature of the market sector itself demands extensive investments with long pay-off periods that cannot be provided by Ukrainian market players.

Nevertheless, the introduction of 4G in 2018 has pushed the telecom industry forward, as mobile internet usage is growing dramatically. According to Oleksandr Komarov, the volume of traffic on the Kyivstar network has nearly doubled from 325 petabytes to 649 petabytes in the two years since the launch of 4G. "Now, in the space of just one month in 2019, our users used two times more data traffic than they did in a whole year five years ago," Komarov explained.

According to the Freedom of the Net 2019 report, Ukraine is a "partly free" country with 56 out of 100 points,which represents a decline from previous years. The report explains that "[t]he online information landscape is partly censored, with the government blocking Russian and separatist websites, and the separatist forces blocking Ukrainian websites in the areas under their control. However, implementation of these blocks is lax on both sides, and the digital environment is otherwise vibrant, despite efforts by political actors to manipulate debates through disinformation and paid content,."

The report refers to May 2017 decision by Ukrainian PresidentPetro Poroshenko, in accordance with a decision by Ukraine's National Security and Defense Council, to impose sanctions on some Russian internet companies, like VKontakte and Odnoklassniki (Russian social networks, equivalents of Facebook); Mail.ru (an email service); and Yandex (a search engine). "Even though many Ukrainian users did not accept Russian web resources blocking in 2017 and actively switched to anonymizers and VPN, Russian websites gradually began to lose their popularity," Vitaliy Moroz explains.

Overall, Ukrainian citizens in the government-controlled territory of the country have free access to the internet. The most severe violations of internet freedom are seen in the occupied territories of Donbas and in annexed Crimea, where pro-Ukrainian bloggers have been kidnapped and prosecuted, with their laptops seized by "law enforcement agencies." Access to many Ukrainian websites is still blocked in those regions, as well.

At the end of the day, Ukraine continues to be at the epicenter of a Russian hybrid war that reaches into the internet, as well.

Social media and news sites are effective tools to disseminate fake news and manipulations. Russia employs troll factories and automated bot systems to affect public discussions on the Ukrainian internet. The internet remains one of the key platforms for Russia to disseminate propaganda and manipulations targeting the Ukrainian population and international audiences.

Over the last few centuries, Ukraine has often served as a borderland for empires, and a country where different cultures met and enriched each other.
VIDEO
August 8, 2018