April 5, 2018
The Euromaidan revolution and ongoing Russian aggression have united the nation like never before. People of various origins, both Russian and Ukrainian speakers, stood up to the pro-Russian regime of Viktor Yanukovych, and now they resist Russia’s efforts to reimpose influence over Ukraine.

As a result, nationalism is a part of everyday life for the first time. Many people feel national pride and willingness to defend the nation; however, these feelings always have a tinge of ambiguity as they fluctuate between ethnic and civic conceptions of the nation.

Before 2013, the boundaries of belonging were blurred. Many were more preoccupied with economic well-being and survival. It was only before elections that politicians artificially sharpened social divisions around such issues as language, regional identification, and geopolitical orientation to mobilize the electorate.

Post-Maidan Ukraine looks different. Many think that you are Ukrainian irrespective of language or ethnic origins; it's important that one is loyal to Ukraine as an independent state and political project. This nationalism tries to be inclusive. It attempts to promote liberal and democratic values of freedom, tolerance, diversity, and individual rights.

In 2015, 56 percent of Ukrainians considered the Ukrainian nation as a composite of all citizens. This is 17 percent more than in 2007, according to Razumkov Centre surveys. 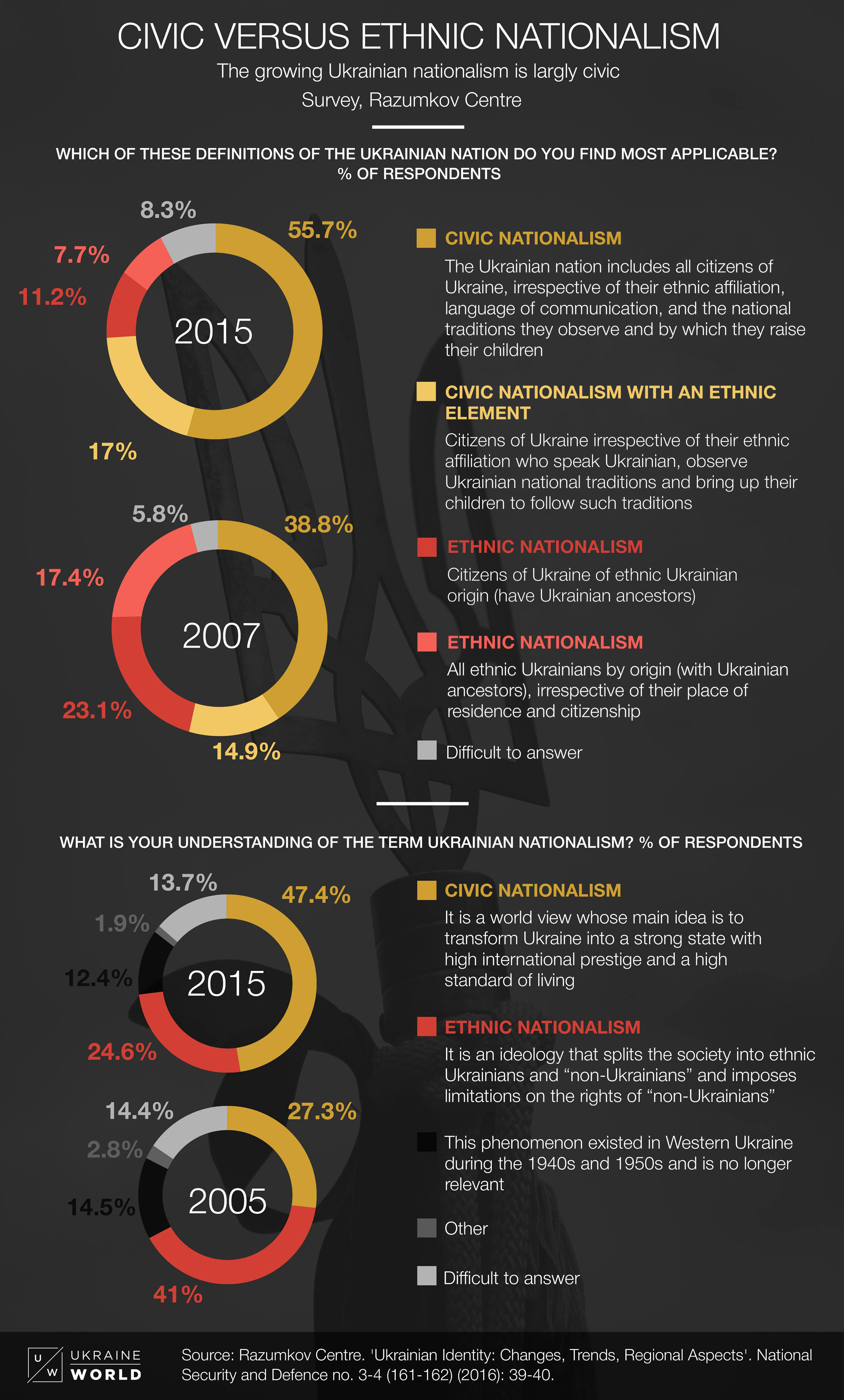 Also, after the annexation of Crimea many Crimean Tatars moved to mainland Ukraine. New Muslim centers were created, and more women wear headscarves in public. All of this is perceived positively, said Vyacheslav Likhachev, an expert at the Ukrainian Congress of National Communities, "because Crimean Tatars support the territorial integrity of Ukraine and oppose Russia. The level of Islamophobia is falling significantly."

However, not everyone agrees that civic nationalism is on the rise. "During the revolutionary upheavals in 2014 as well as in 2004, there was the impression that a new civic nation is emerging in Ukraine. But this impression soon waned. In general, Ukraine has not experienced any qualitative changes in terms of nationalism," said Anton Shekhovtsov , a fellow at the Institute for Human Sciences in Vienna . However, he recognizes that Ukrainians have greater loyalty toward the state and a stronger civil society, though it still lacks real political influence.

It's almost impossible to find pure ethnic or a pure civic nationalism in today's Ukraine. The emerging Ukrainian nation has some apparent blood-and-soil elements: some are positive, others are not.

Some ethnic elements are reinforced because of Russian aggression against Ukraine. Rejecting Russian culture, which dominated the Ukrainian space for centuries, many Ukrainians are going back to their roots.

More radical elements are also on the rise, which is worrisome. Far-right movements were visible during the Euromaidan. Many members of the Azov Regiment—initially a volunteer militia fighting in eastern Ukraine and now a part of the national gendarmerie—support far-right ideology. Earlier this year members of the NGO 'The Natsionalni Druzhyny' (National Militia Units), founded by veterans of the far-right Azov regiment, marched in the center of Kyiv.

Despite being more visible, far-right movements do not have wide support. No far-right party managed to meet the 5 percent threshold and enter the Ukrainian parliament during the 2014 elections. According to a recent survey, only around 3 percent would vote for the nationalist party Svoboda and 0.3 percent for the more radical Right Sector.

"The voice of far-right movements is now much louder than before 2013. They attract more members, especially youth. Their slogans are more popular. But they are not among decision-makers," said Maksym Butkevych, a Ukrainian activist, human rights defender, and coordinator with the No Borders non-profit project.

Some xenophobic elements linger in Ukrainian society. "Radical nationalism is very weak in Ukraine and does not affect the everyday lives of Ukrainians. Although racism, homophobia, and negative sentiments to Roma are quite widespread in Ukrainian society, the main problem is not individual xenophobic sentiment but the lack of responsibility for public expression of such views. At the same time, Western pressure helps to strengthen the imperative of tolerance in Ukraine," noted Volodymyr Kulyk, head research fellow at Ukraine's National Academy of Science's Institute of Political and Ethnic Studies.

Even still, the new nation built after the Maidan shows many signs of inclusiveness. More citizens believe that people from different ethnic origins or those who speak other languages are their compatriots. A new impulse of affection toward their country is what shapes this greater unity. It is important, however, not to let this affection turn into new thinking that pits "us" against "them." Nationalism can be civic and liberal, but it can easily turn into its opposite.

In its fight to prevent the spread of coronavirus in the country, the Ukrainian government may sacrifice one of the country’s biggest assets since the Euromaidan...
VIDEO
July 2, 2020

Ukraine as a Big Frontier, as a Borderland – why this metaphor is important and why it is dangerous. Brief reflection by UkraineWorld chief editor Volodymyr Yermolenko.