March 27, 2019
UkraineWorld looks into changes in the agendas of Ukrainian presidential elections over the last 20 years. 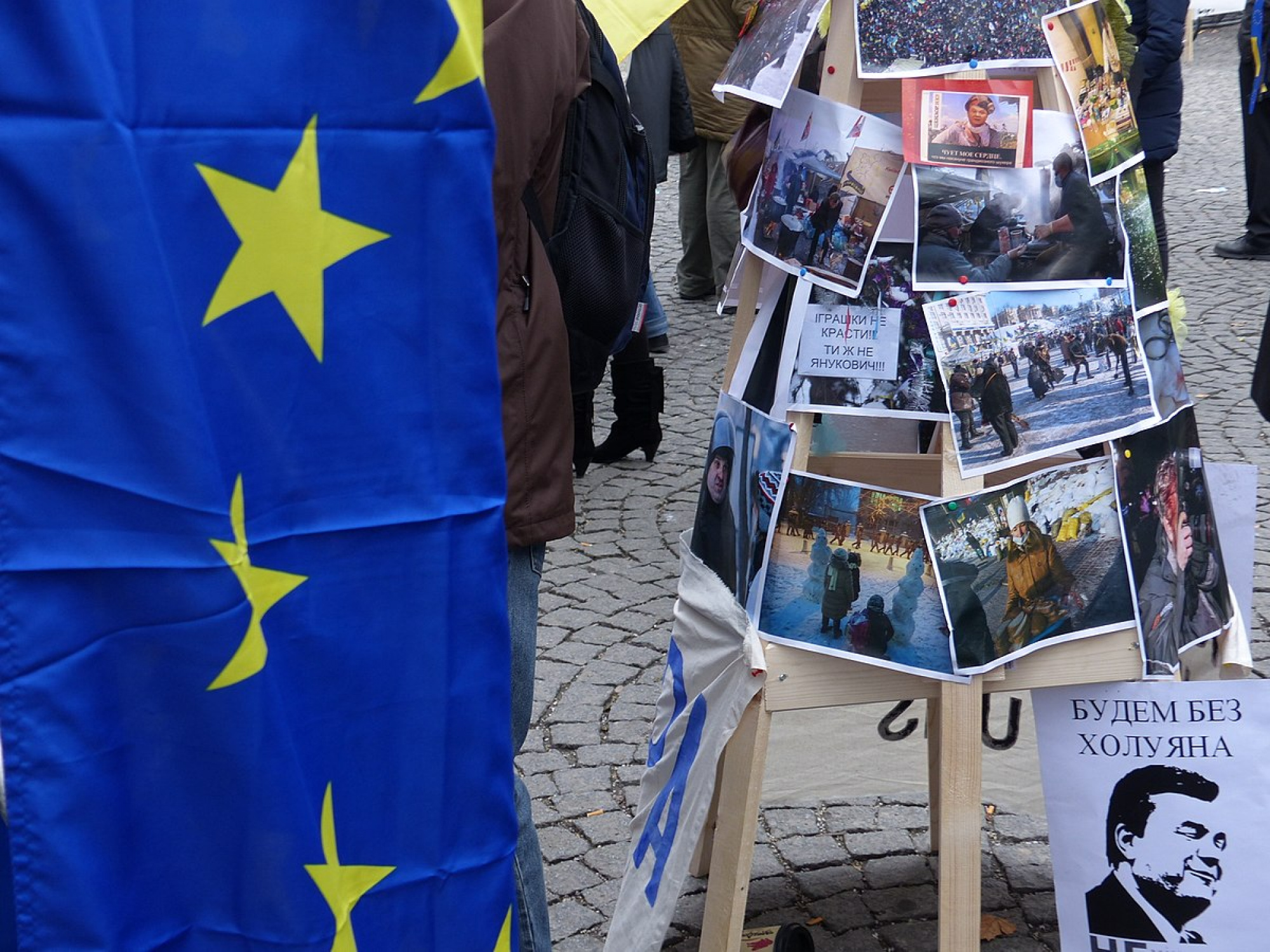 During these 20 years the expectations of the Ukrainian nation have changed in relation to internal and external political processes.

Of course, candidates for the presidential post have always tried to respond to the needs of voters. What is the correlation between the moods in society and the programs of candidates? How have the discourses changed since 1999? We have analyzed the programs of the core candidates in these Presidential elections (1999-2019) and have some interesting findings to present.

Kuchma, who was first elected president in 1994, appealed to the achievements and democratic changes he had attained during his first term: Ukraine became a member of the Council of Europe; the Ukrainian language was proclaimed the state language; the Ukrainian hryvnia, the national currency, was established; the Constitution of Ukraine was adopted. However, support for him in society was extremely low in 1999: negative social and economic processes did not provide him with credit from the electorate. According to opinion polls, he had chances to win only in a run-off against Symonenko. The tragic death of Chоrnovil, falls in the popularity rating of Oleksandr Moroz, the disagreement among the "Kaniv Four" candidates - all these factors contributed to Kuchma getting into the second round. 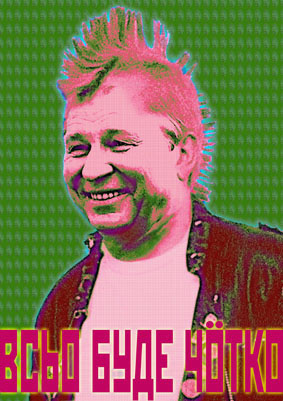 Kuchma's misses (non-payment of wages to miners and, as a result, their strikes in the East of the country, devaluation of the hryvnia, rising prices of food items and petrol) were used as the basis for his opponent's program, which criticized the "reforms" of an acting President. The rhetoric Symonenko used in his program was close to those people who felt nostalgia for the days of the USSR: "interests of working people," "enriching the new bourgeoisie," "NATO is the world policeman," "pathological consequences of the actions of reformer-capitalists," "society's lumpenization." He promised to halt privatization and start to provide government regulation in the financial sphere and ensure monopolization of international economic relations. Symonenko also wanted the Russian language to become a state one. Such calls were alien to the majority of Ukrainian voters. As a result, "democratic" candidate Kuchma defeated "communist" Symonenko by winning 56.25% of votes against 37.80%. But it was clear for many internal and external observers that communist Symonenko was the best possible opponent for Kuchma: Symonenko was portrayed as a "foe", dragging Ukraine back into communism. This mobilized Kuchma-skeptic citizens to vote for him as the "lesser evil". This "political technology" worked in Kuchma's favour. 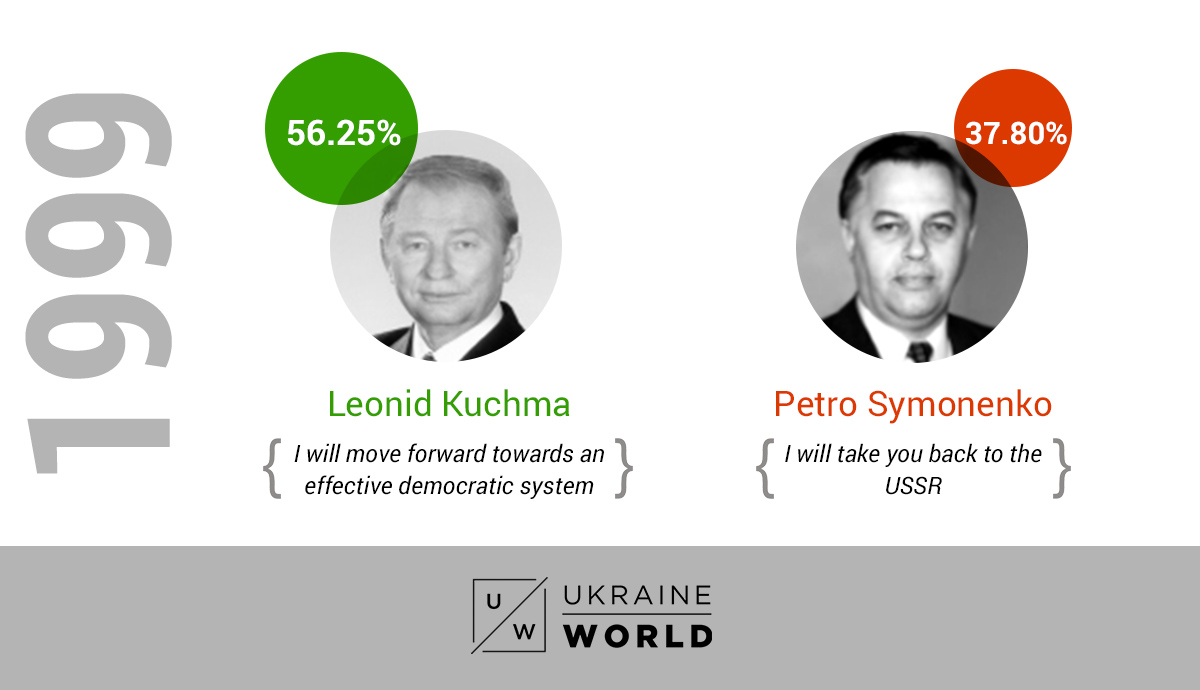 Out of 26 registered candidates there were two leaders of opinion polls: Viktor Yanukovych, the incumbent prime minister, and Viktor Yushchenko, opposition leader. Yanukovych was supported by both Kuchma and Putin, whereas Yushchenko – by the increasingly strong pro-European Ukrainian civil society. 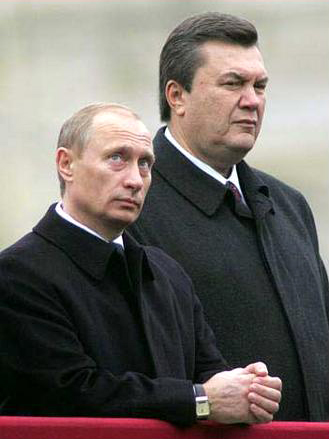 After analyzing their programs we discovered that they had much in common: both candidates promised economic stability, new working places, rise in salaries and reductions in tax. Moreover, both candidates called for friendly, mutually-beneficial and stable relations with Russia. Yushchenko said nothing in his program about the NATO vector. However, in various interviews, he did stress the importance of democratization as well as EU and NATO integration processes that would benefit Ukrainian business. Yanukovych promised progress in European integration and called for "a fair human society with equal opportunities". The Orange Revolution showed that his views on what "fair society" was differed from the views of the majority of Ukrainians. The second round election results were rigged. Putin congratulated Yanukovych on being elected the President of Ukraine. However, the Orange Revolution burst forward and a third round of voting ensued: Yushchenko was elected President of Ukraine. 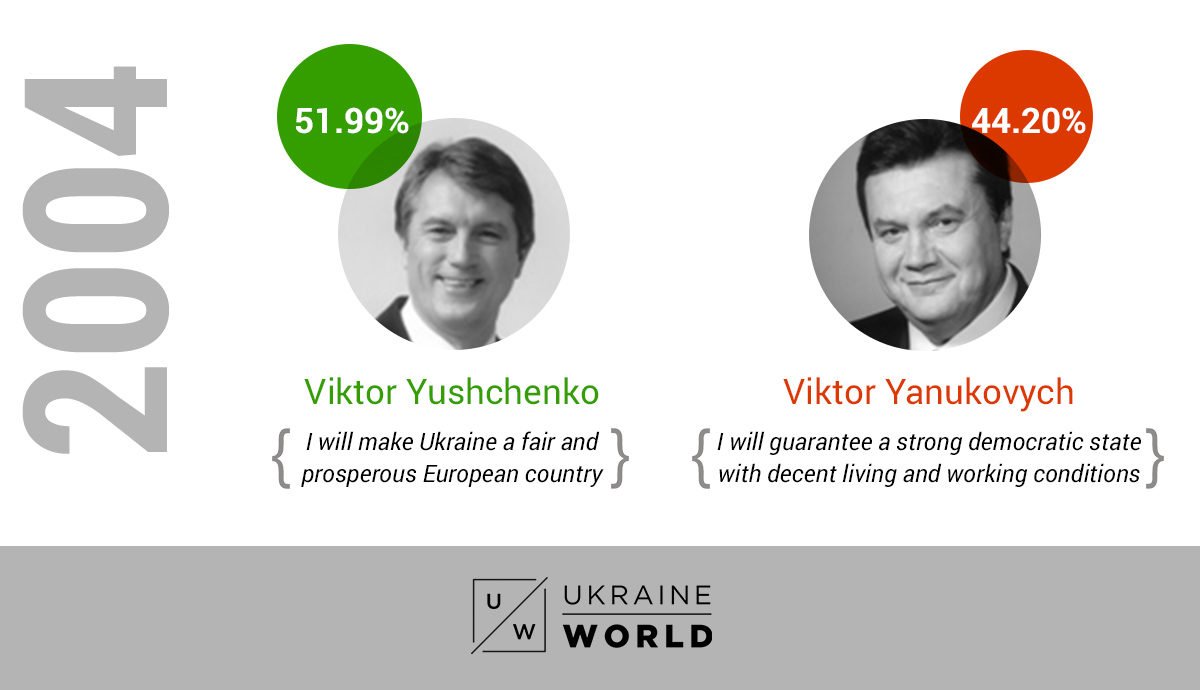 Yanukovych placed the accent on the Ukrainain economy flourishing: he promised that Ukraine would be part of G20 in 10 years and guaranteed the well-being of all citizens. Apart from this, he promised that the Russian language would be a state language together with Ukrainian. He saw the non-bloc status of Ukraine as the main objective. He proposed the renewal of friendly relations with Russia and CIS states as well as to build a strategic partnership with the USA and EU.

Tymoshenko fought against oligarchy and suggested a new Constitution of Ukraine. Yulia guaranteed that Ukraine would become a key transit state. She promised Ukraine would become an EU member as soon as Europe "appeared" in Ukraine (nobody knows what was meant by this). "Friendly" cooperation with Russia and CIS states was considered important. This time Yanukovych got his way and won the election race. However, he did not stay in power for long: he tried to monopolize power, threw Tymoshenko into jail, and refused the European vector. His actions inevitably led to aggravation of the public's attitudes, and the Euromaidan protests became a logical response to his unfair policies. 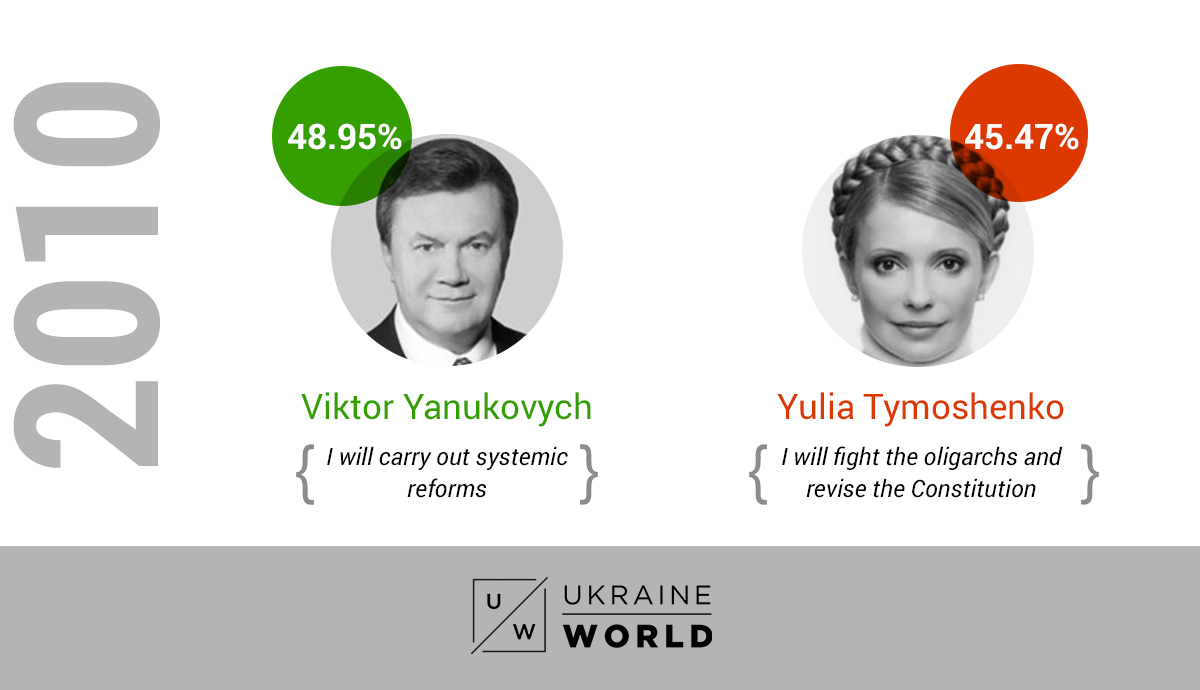 Two core candidates – Poroshenko and Tymoshenko, focused on changes in Ukrainian society caused by the Revolution of Dignity, European values and a thirst for radical changes. The issues of security policy, the EU-Ukraine Association Agreement, deoccupation of Crimea and the fight against corruption, became the main objectives in the programs of both candidates. It was the image of a Defender who would stop the war and return Ukrainian territories that enabled Poroshenko to become the President in the first round of the elections for the first time in Ukrainian history. 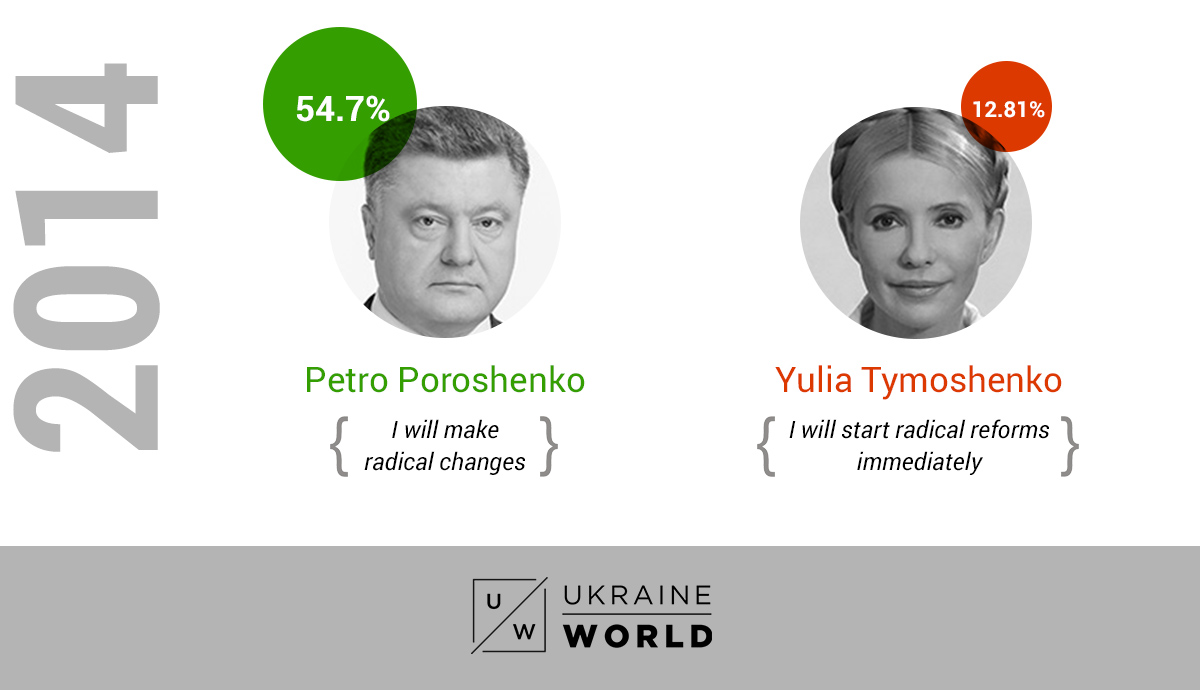 According to all opinion polls, we have an unchanging top 3 candidates consisting of Zelenskyi, Tymoshenko, and Poroshenko. At the moment we don't know which of them will become the President of Ukraine. We cannot predict the results of the 1st and 2nd round. Nevertheless, we can try to understand the main discourses contained in the programs of Zelenskyi, Poroshenko and Tymoshenko.

Zelenskyi's central idea is fighting the old system by taking specific measures. For instance, adoption of particular laws on anti-corruption and impeachment of the president. Furthermore, he sees the NATO vector as a guarantee if Ukraine's national security. Poroshenko's main discourse is Ukraine's NATO and EU vector and his planned application for EU membership in 2023. Tymoshenko's New Course suggests a renewal of all spheres, including security and foreign affairs ("Budapest Plus" negotiations format instead of the current Minsk agreements); New Social Contract instead of acting Constitution, etc, and boosting innovation in the Ukrainian economy. 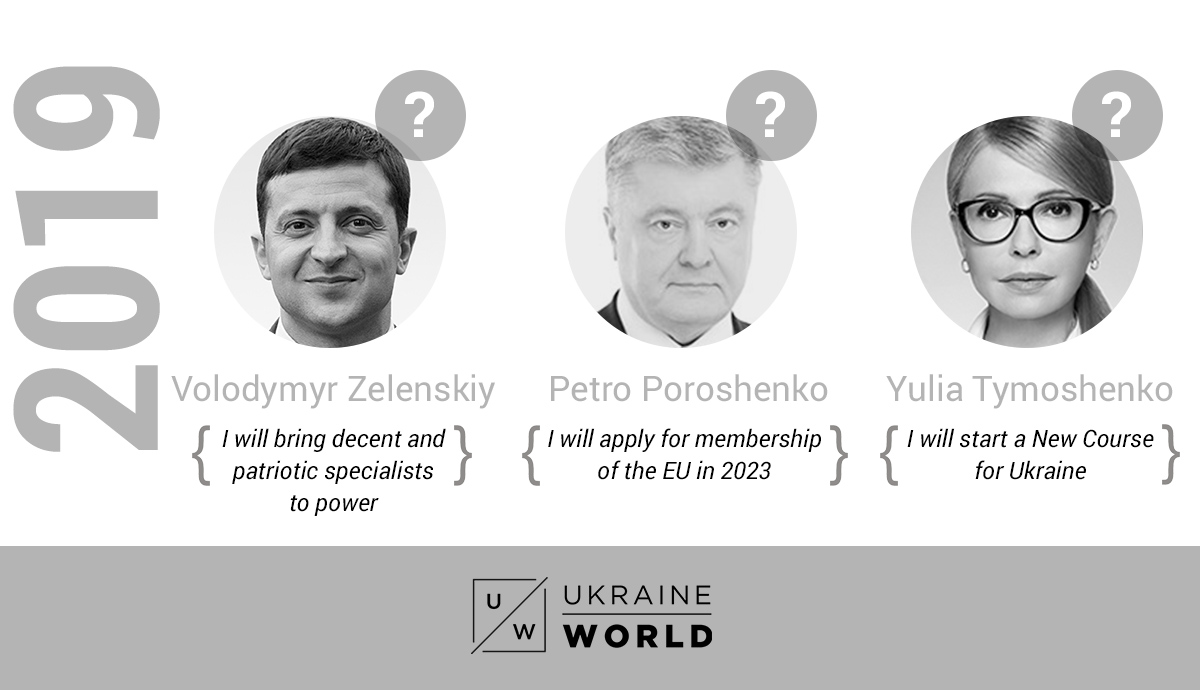 After analyzing the programs of the main candidates in the period of 1999-2019, we noticed that the messages are deeply interrelated with the dominant discourse at this time as well as with the mood of the general public.

In 1999 it was impossible to imagine a candidate with a pro-NATO vector winning the Presidential elections. Now it is hard to imagine a candidate with pro-Russian or non-aligned views winning the election race. At the 2010 election Russia was considered to be a strategic partner, but in 2019 it is an aggressor. The prevailing moods in the country are shifting in accordance with the challenges that Ukraine faces.

How Does Russia Deny the Existence of Ukraine?

Denying the existence of Ukraine as a nation and state is one of the key strategic narratives of Russian propaganda.
VIDEO
September 18, 2019