August 3, 2020
While acceptance of LGBT people in Ukraine has progressed in recent years, protecting their rights remains a challenge. Key challenges include religion-based hostility, loopholes in the law, and impunity for violators of rights. 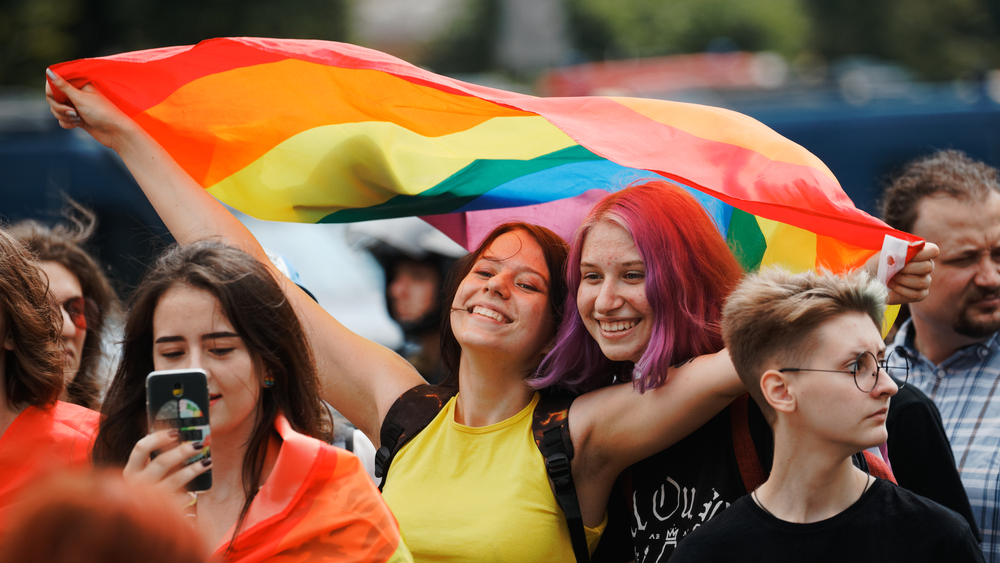 When it comes to LGBT rights, Ukraine's adherence to democratic values is very uneven. While Ukraine is a secular state, churches of different denominations condemn LGBT marches and prompt others to do so. As a result, appeals to so-called "traditional values" (meaning heterosexual, nuclear families) are repeated throughout public discourse, from the far-right to the parliament or ordinary citizens. Eventually, such perceptions end up blocking the vital steps to secure LGBT rights at the state level.

Since the beginning of this year, the Nash Mir LGBT Human Rights Centre has registered 85 attacks and other violations of LGBT rights. According to its head Andriy Kravchuk, this number is three times lower than in the same period last year, partially as a result of the pandemic. During 2019, however, dozens of cases of blackmail and violations of privacy of LGBT representatives took place in different regions of Ukraine. Most such violations happen in big cities like Kyiv, Kharkiv, Odesa, since LGBT people are more open and visible there. All this includes hate speech in various forms, expressions or crimes of hatred. Although the victims usually suffer emotional and material harm, very rarely do they report incidents to the police.

The Criminal Code of Ukraine currently does not consider intolerance, discrimination, or hatred based on SOGI (sexual orientation and gender identity) as an aggravating circumstance in the commission of crimes.

This is no surprise, since crimes of hatred and discrimination have been notoriously poorly investigated for years. As Kravchuk points out, the issue goes beyond just improper investigations of anti-LGBT crimes. The core of the problem lies in the incorrect classification of those crimes. The Criminal Code of Ukraine currently does not consider intolerance, discrimination, or hatred based on SOGI (sexual orientation and gender identity) as an aggravating circumstance in the commission of crimes. Another issue, according to Kravchuk, is that the police have developed their own protocols to classify any attack on LGBT people as simple hooliganism, thus sweeping the motivation and nature of anti-LGBT crimes under the rug.

The police have developed their own protocols to classify any attack on LGBT people as simple hooliganism, thus sweeping the motivation and nature of anti-LGBT crimes under the rug.

Yana Kolisnichenko, a lesbian, did not really think much about standing up for her rights until her first Kyiv Pride last year. She says that the lack of legal protection for LGBT people makes her feel unsafe in Ukraine. "I understand that I have to count on myself, and I am ready to resist if any unusual situation happens," she explains.

To change this, Ukraine's Verkhovna Rada registered three bills (3316, 3316-2 and 3316-3) in Spring 2020 adding SOGI to a range of conditions that would ensure punishment for crimes motivated by anti-LGBT animus. Due to efforts by religious activists, the Special Committee of the Verkhovna Rada On Issues of Law Enforcement did not recommend them for adoption, Kravchuk laments. "The behavior of Ukrainian churches in this case is particularly cynical and shameless," he adds. "They object to providing the same protection to SOGI  that is afforded to religious beliefs."

Ukraine's Verkhovna Rada registered three bills (3316, 3316-2 and 3316-3) in Spring 2020 adding SOGI to a range of conditions that would ensure punishment for crimes motivated by anti-LGBT animus.

In June, the Committee "received hundreds of appeals from absolutely all denominations" that were concerned about the proposed changes to the Criminal Code of Ukraine, according to its Chairman, Denys Monastyrskyi.

Although religious establishments and organizations are not directly physically dangerous, Kravchuk considers them to be the biggest "enemy" of the LGBT people in Ukraine. However, since they are gradually losing political influence in Ukraine, their hostile attitude towards the LGBT is slowly softening, he notes. "For example, they are already accustomed to public LGBT actions and, in general, have come to understand that this is a legitimate right of Ukrainian citizens," he argues. 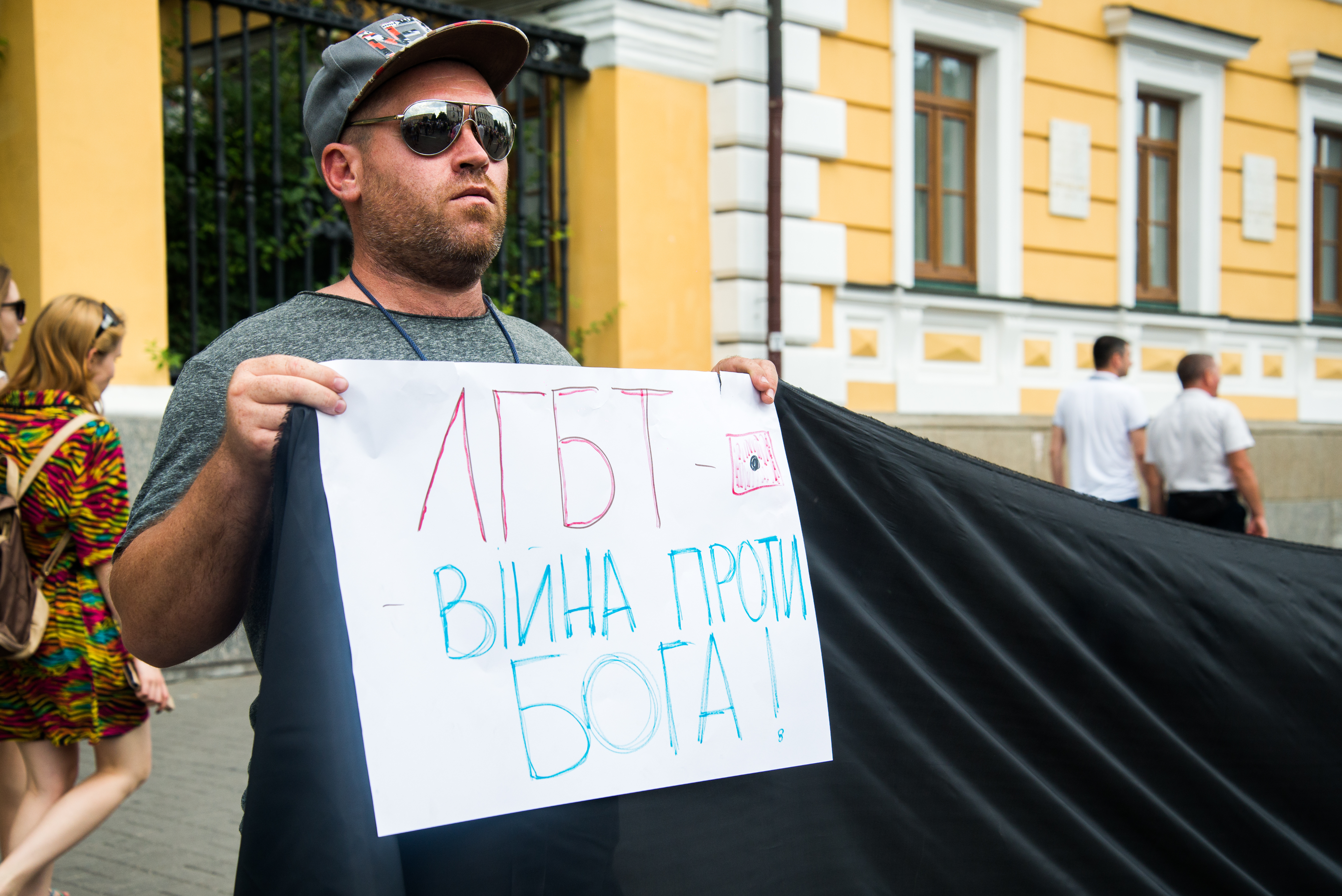 "LGBT is the war against GOD". shutterstock.com

While these bills to secure the LGBT rights are currently under consideration by other committees, Kravchuk says that it is unclear what to expect, especially, when "the politicians who support the rights of LGBT people are less active and visible than the homophobic lobby." Indeed, just before its summer recess, the parliament registered a new homophobic bill "On Administrative Offenses Against the Responsibility for the Promotion of Homosexuality and Transgenderism," introduced by members of the ruling Servant of the People party.

The lack of adequate legislation, and the resultant impunity for violent homophobes, puts everyone in the LGBT community at risk.

The lack of adequate legislation, and the resultant impunity for violent homophobes, puts everyone in the LGBT community at risk, according to gay veteran Viktor Pylypenko. It took a year for him to finally get a first court hearing on his case after being attacked in August 2019, when his fellow soldier struck him in the back of his head during a ceremony of honoring the fallen of the "Donbas" battalion.

Attacks of the far-right on peaceful LGBT marches were among the key catalysts for Pylypenko, who served in the Donbas war from 2014 to 2016, to come out. Having just returned from war, where his unit had been sleep deprived and suffered tremendous losses, he was shocked. "In the rear, I saw hundreds of muscular and aggressive deserters which called themselves patriots, but when Russia had started its war against Ukraine, they hid from the military enlistment office and decided to attack weak and defenseless  gays and feminist women, thinking that they were cool".

The negative perception of LGBT people has been greatly fueled by Ukraine's far-right organizations such as the Azov movement, C14 and the NatzDruzhyna, which had been known for their violent attacks on LGBT people.

A recent report from Nash Mir states that the aggressive behaviour of these groups against the LGBT people has continued. According to Kravchuk, for now, Ukrainian far-right are the only aggressive force and enemy of the LGBT community in Ukraine. "Fortunately," he adds, "[they] have very little influence on politics and society in general." Far-right violence against the LGBT seems especially hypocritical to Pylypenko, who served at the front in Donbas. While the far-right often accuses the LGBT community of "leftism", "marxism" and anti-Ukrainian aspirations, Pylypenko made the decision to come out very publicly to show that being LGBT is not a matter of ideology, but rather about standing up for equal rights. In fact, there are LGBT centrists, leftists, rightists, and even radicals, such as the several gay fighters in the far-right Azov who are currently undercover. 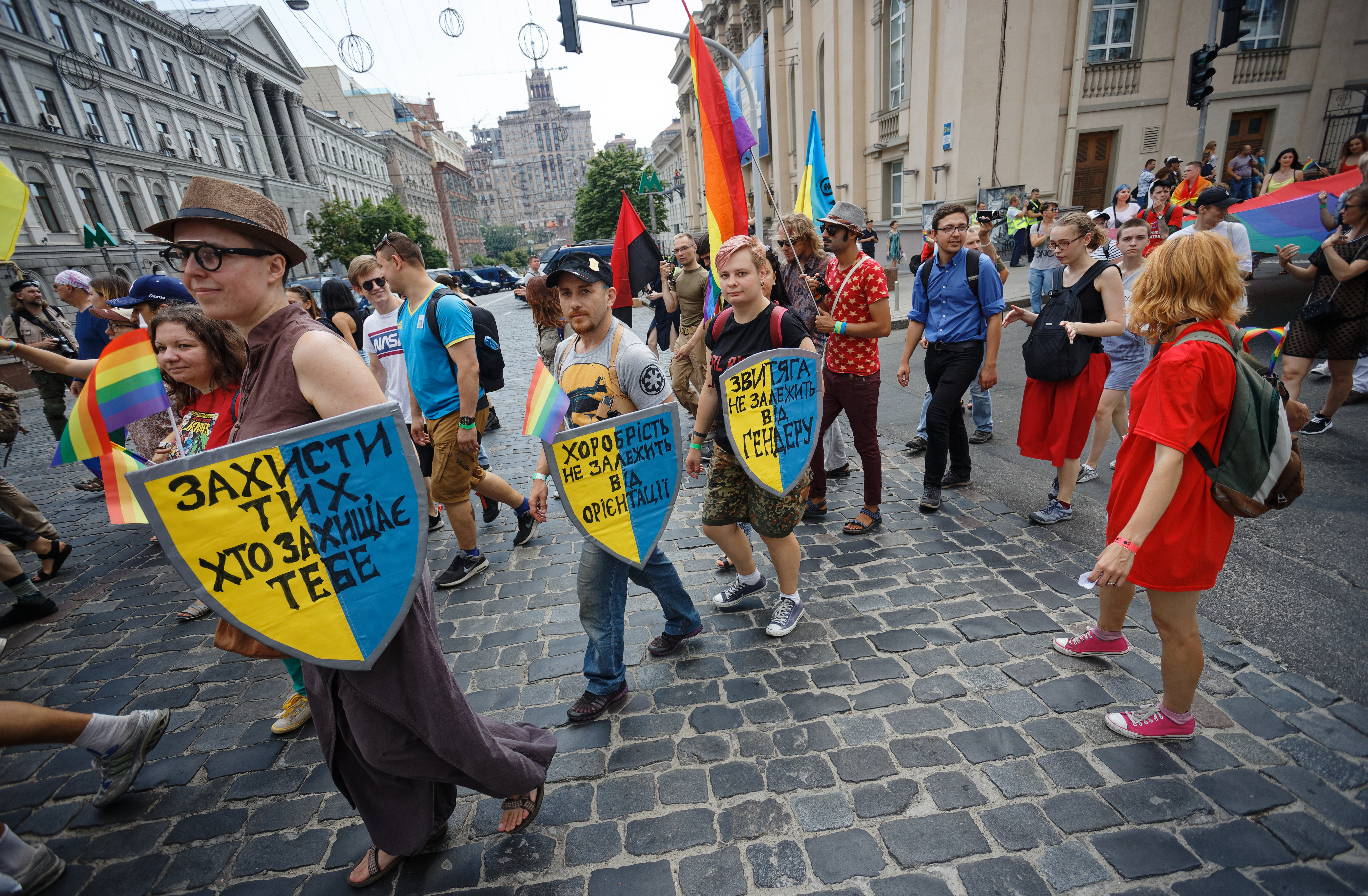 "Protect those who protects you," "Courage does not depend on gender". shutterstock.com

In 2019, Pride marches saw 6-8 thousand people in Kyiv, and 2-3 thousand in Kharkiv, Ukraine's second biggest city. These record high attendances proves that the social perception of LGBT people is slowly improving alongside their political and legal situation. However, Andriy Kravchuk argues that, unlike in Poland, LGBT rights lack political interest in Ukraine. "In Ukraine, few people are interested in such issues. [LGBT rights] are not a factor that determines the attitude of voters to specific political figures or parties," he explains.

Yana Kolisnichenko sees that the situation for LGBT people has changed in both directions. "Drawing parallels with the 2000s, it is surprising that back then society was more tolerant and kinder to LGBT people", she recalls. At the same time, she says, the number of tolerant people is growing. "People are gradually coming to the conclusion that we are not doing anything wrong, and that we just want to be happy without hiding it."

The social perception of LGBT people is slowly improving alongside their political and legal situation.

Viktor Pylypenko believes homophobia in Ukraine is a matter of poor education and stigmas coming from Soviet times. Despite all this, the veteran and activist sees social perceptions moving in a positive direction. "Many people have a positive attitude", he says, "many consider it cool that they have an openly gay friend, moreover a veteran, who went through the war."

What can really change people's minds and break the wall of religious prejudice and ideological misconceptions are real-life encounters and communication with those who have never met a gay person, Pylypenko adds. "After my coming out, my friends, acquaintances and even military men I had not known, have changed their attitude not only towards the LGBT community but towards democratic values overall."

While inclusion is still a wishful thinking in Ukraine, some companies are trying to change the situation by putting the idea of socially responsible business in...
PODCAST
June 5, 2020