May 28, 2020
For Ukraine's IDPs, the healthcare concerns and economic hardships of the coronavirus crisis have been particularly challenging. Living in relatively unfamiliar surroundings and typically far from extended networks of friends and family, they have faced upheaval for the​ second time in a matter of years. Iryna Matviyishyn spoke to four members of the country's IDP community to get a better idea of how the pandemic has affected Ukrainians displaced by Putin's war. 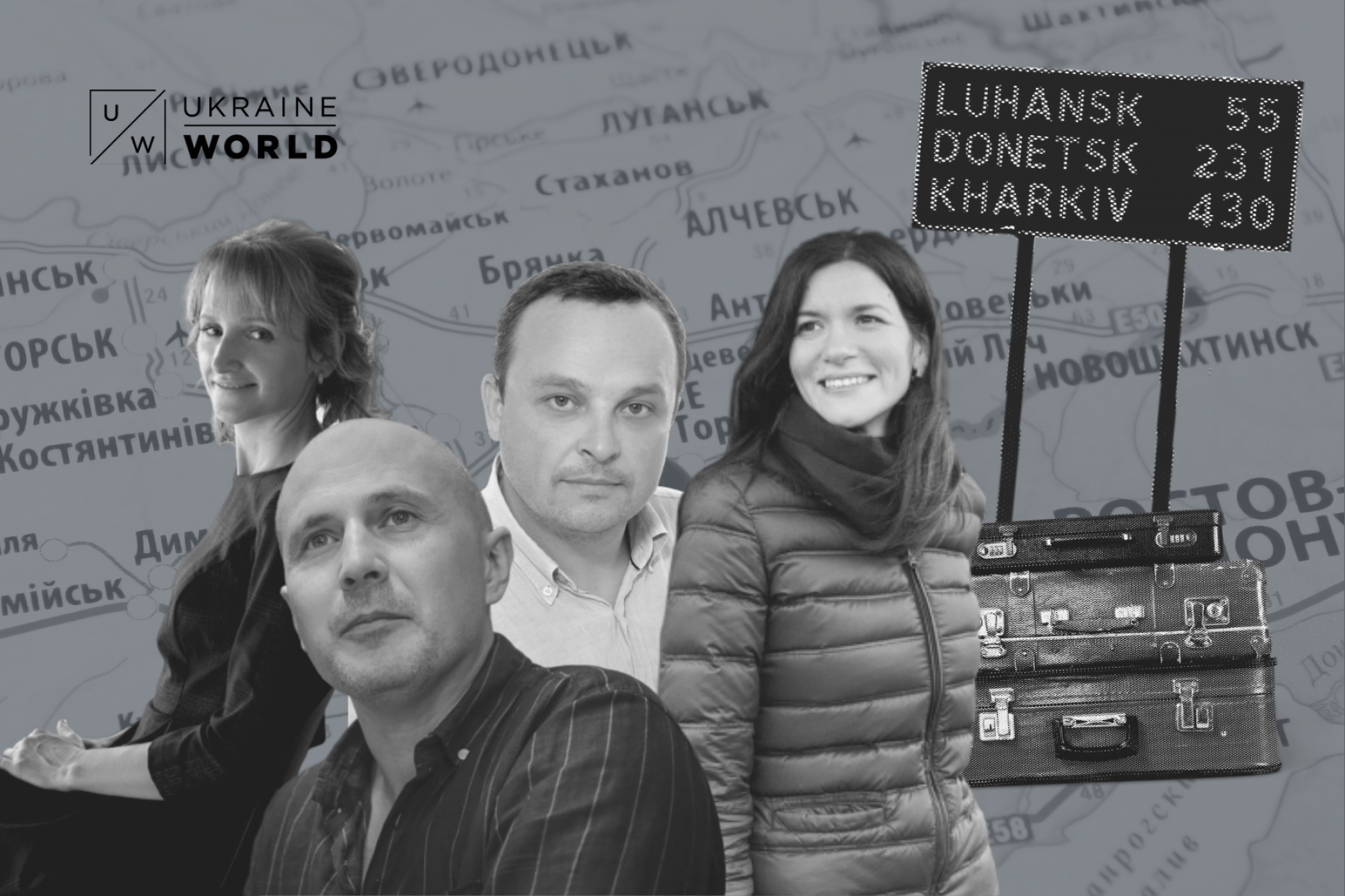 When the coronavirus crisis reached Ukraine in early 2020, the country was already struggling to cope with the fallout from an undeclared war with Russia that was then entering its seventh year. Beginning in February 2014, Russian aggression has led to the occupation of Ukraine’s Crimean peninsula and around half of the Donetsk and Luhansk regions in the east of the country. Despite no longer making international headlines, it remains Europe’s only war.

Since 2014, the Russian occupation has forced millions to flee their homes in Crimea and eastern Ukraine. This has created a population of internally displaced persons (IDPs) within Ukraine that is thought to number around 1.4 million people. Largely unseen by the outside world, the members of this vast IDP community have had to rebuild their lives elsewhere in Ukraine, often with little more than the personal possessions they were able to carry with them.

For Ukraine's IDPs, the healthcare concerns and economic hardships of the coronavirus crisis have been particularly challenging. UkraineWorld spoke to four members of the country's IDP community to get a better idea of how the pandemic has affected Ukrainians displaced by Putin's war.

Thirty-four-year-old IDP Anna Postolova lost her job in Kyiv on March 12 as coronavirus lockdown conditions were introduced in the Ukrainian capital. It was a sudden blow after an extended period of relative stability. Anna had fled her home in Luhansk during the early months of the war with Russia in 2014. She initially attempted to settle in west Ukrainian city Ternopil before later moving on to Kyiv.

For the past three years, she had been employed by a hotel booking company, but with the hotel business on hold due to the pandemic, Anna was told to take indefinite unpaid leave. "As I rely entirely on my monthly salary for my rent and living expenses, I had to start looking for a new job immediately," she says. Anna was able to find a new position relatively quickly. Her new salary is significantly lower than her previous job and the workload is greater, but she considers herself to be very lucky.

Looking back at her time as an IDP, Anna believes there is now far less stigma attached to people from eastern Ukraine than five or six years ago, when it was common to experience negative attitudes. Anna says the reception she has encountered in Kyiv has helped her adapt to the new reality she finds herself in as a result of the ongoing war.

I have always understood that nobody owes me anything and have tried not to rely on anyone but myself. Even so, I seem to meet people who want to help me.

Associate Professor of Journalism and Language Communication Anton Lyahusha, 33, has no time to rest. Originally from Donetsk, he now works at Ukraine's National University of Life and Environmental Sciences in Kyiv. Since the start of the coronavirus lockdown, he has switched to online teaching and runs numerous classes covering everything from history and journalism to mass communication and media studies. "I have no time to be sad. It surprises me when people in the education industry say they have nothing to do during the lockdown, because I find that distance learning actually increases the workload."

Unlike many of his friends in the IDP community who have been hard-hit financially by the coronavirus crisis, Anton remains on a fixed university salary and says that the limitations of self-isolation have actually allowed him to save money.

He left Donetsk in 2014 and took a trip to Europe while remaining hopeful that "everything would be back to normal soon". When it became clear that there would be no rapid end to the conflict, he spent time with his family in government-controlled eastern Ukraine before following Donetsk National University intoinstitutional exile in central Ukrainian city Vinnytsia, where he worked as an Associate Professor of World History until 2019. However, compared to his big city experience in Donetsk, he found the pace of life in Vinnytsia to be very provincial and decided to move on.

Alongside his digital teaching duties, Anton is now using the quarantine period to focus on self-improvement. In addition to online courses from Cambridge and Yale universities, he is also working on his English and Germany language skills.

I have found that I am very socially independent and am enjoying working on my research projects and different ideas.

For forty-three-year-old Khalil Khalilov, the coronavirus lockdown has proven an opportunity to develop his restaurant business. Crimean Tatar Khalil left Russian-occupied Crimea for Lviv following the 2014 takeover and established a small restaurant in the city. He began working with a number of existing food delivery services, but found the available partnership options unprofitable. When quarantine measures were introduced in March 2020, he finally decided the time was right to launch his own tailored restaurant delivery service.

The process of establishing an efficient delivery service within a "dark kitchen" format is still ongoing, but he already believes it was the right move given the future prospects for the restaurant industry. "The current precautions will remain for a long time," he says. "I think people are unlikely to go back to dining in restaurants so frequently or eating with reusable plates and cutlery." Instead, he is hopeful that as people gradually return to work, office staff will start ordering more and more food deliveries.

Unlike many business owners, Khalil has not been forced to dismiss any of his employees. On the contrary, he says he's actually expanded his team by hiring an additional person to handle deliveries.

This wouldn't have been possible without the support he has received. In response to the coronavirus crisis, Khalil's landlord reduced the rent for his restaurant by 50%, and he was lucky to get the same discount on his apartment. He says this spirit of solidarity has also been evident within the Crimean Tatar community, with members in Lviv and Kyiv growing closer during the crisis and communicating more often.

The lockdown has been particularly tough for thirty-six-year-old former Luhansk geography teacher Valentyna Honcharova, who fled the Russian occupation of her hometown in 2014 before setting up a travel business in Lviv two years later. Most of her work previously revolved around selling tours to popular international destinations like Egypt and Turkey, but with access to these countries now restricted, she is thinking of shifting her focus to the domestic market. "That is what I see other Ukrainian tour operators doing, and that is what I see happening in other countries. Everyone is now concentrating on their own domestic tourism industries," she says.

Valentyna's sideline business of helping Ukrainians with work visas and related paperwork for Poland has also suffered. Travel and quarantine restrictions in Poland have reduced demand for these services to a trickle, but she is hopeful that this aspect of her work will recover in the coming months as the flow of Ukrainian workers resumes.

With business currently slow, she has had to rely on her limited savings to get by, but tries to remain optimistic."In general, I never worry. However, since the pandemic began I have found myself wondering about the future. I even thought about changing my career and a friend suggested working for an insurance company. I saw a scary video they produced about the coronavirus crisis and decided it was not something I would like to be part of. I want to bring hope to people, not instill fear." With relatively little work to occupy her, Honcharova says she has been spending more time with her church helping to feed Lviv's homeless population.

This article was first published by Atlantic Council.

Rostyslav Kosyura is a German-Ukrainian entrepreneur who decided to help Ukraine reduce its food waste. Read and watch more in our project Stories from Ukraine.
PODCAST
February 26, 2020