March 19, 2019
Ukraine's Central Election Commission registered 44 candidates and only 4 of them are women. This has been the largest number of women candidates for presidential elections in independent Ukraine since 1991. 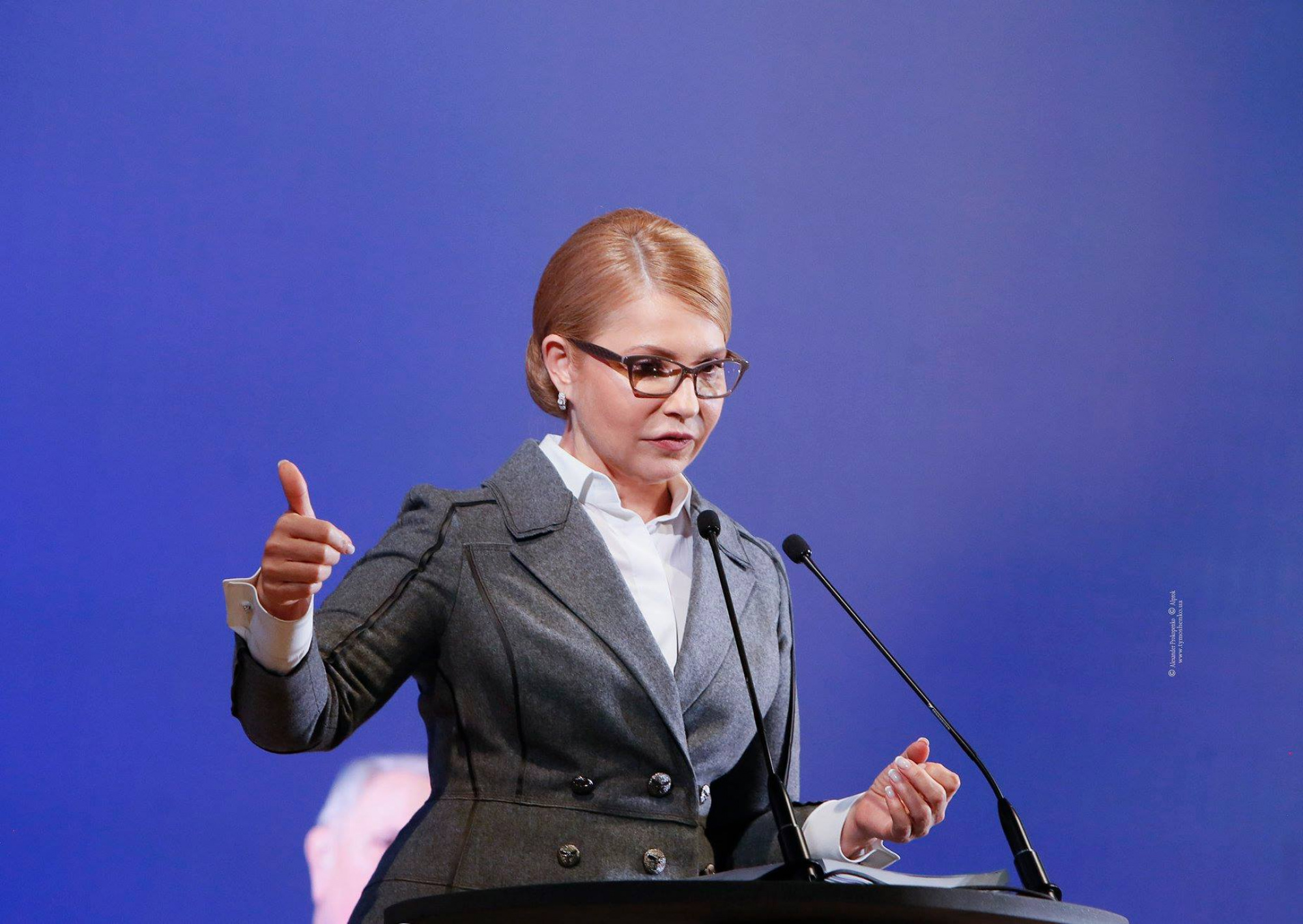 The statistics shows that the number of women fighting for the Presidential post in Ukraine is rather low and this tendency is still in place. The table below illustrates the situation clearly. 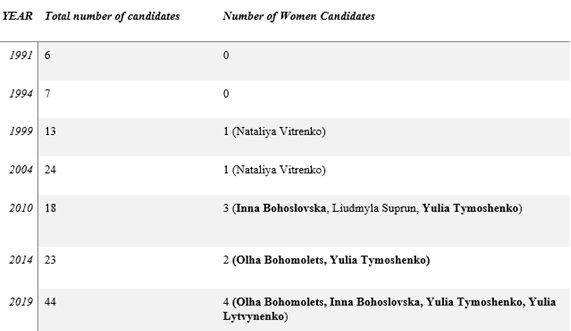 Though the situation has improved in comparison with the first years of Ukraine's independence, women are still underrepresented in Ukrainian politics. So, in this article we will get to know more about those women who are challenging male candidates at the 2019 Presidential elections in Ukraine and showed that the possibility to have a woman president is quite realistic. 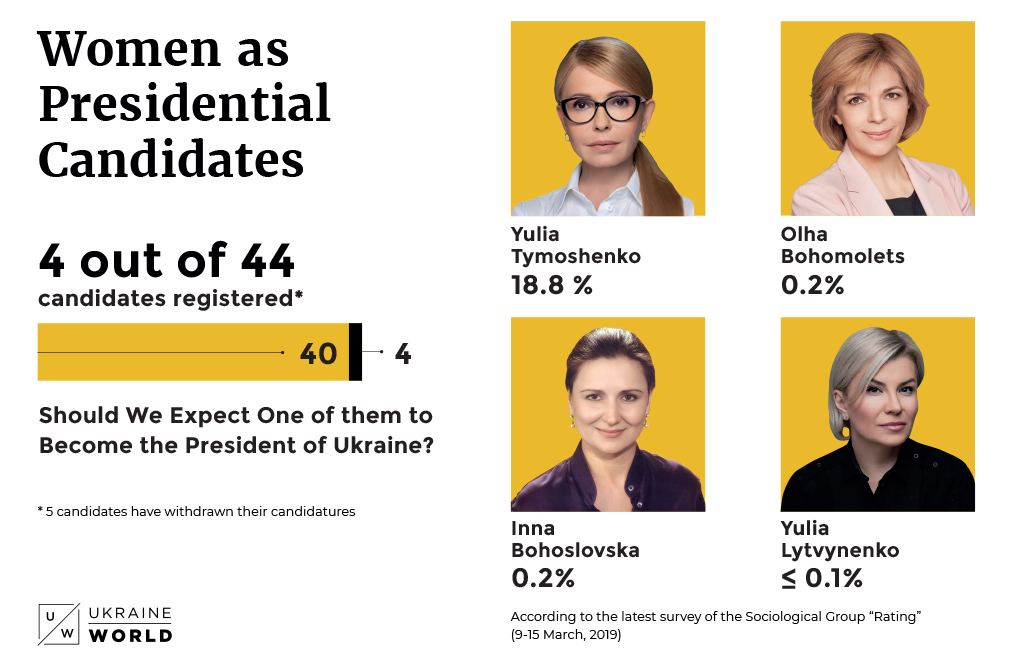 Yulia Tymoshenko needs no special introduction. She is known to be a veteran of Ukrainian politics and she is still at the front. Yulia is leading the polls together with her opponents Volodymyr Zelenskyi and Petro Poroshenko. Tymoshenko presented her Action Plan, which is called "New Course of Ukraine." However, she pays no attention to fighting against sexism or gender stereotypes. At the same time, she calls for the provision of financial support "to families that give birth to the children of Ukraine." This can be considered as backing for so-called "traditional values" and closing one's eyes to problems that Ukrainian women often face in their families.

At the same time, "New Course of Ukraine" presents rather populistic ideas and we could not help mentioning some of them. According to the program, under Tymoshenko's presidency Ukraine would become a state without an oligarchy, where people can initiate a referendum in order to fire politicians who did not fulfil their responsibilities. Moreover, Ukrainians would have the same salaries as people in Poland have now. And last but not least, gas prices would be halved in the first month of Tymoshenko's presidency. This will inevitably lead to a dramatic fall in tariffs for hot water and heating. It is unclear, however, how she intends to decrease the gas price without interfering with price-setting (and thus breaking the fragile gas market which is now being created in Ukraine). However, these statements help Tymoshenko to retain her place among the leaders in the current Presidential campaign. 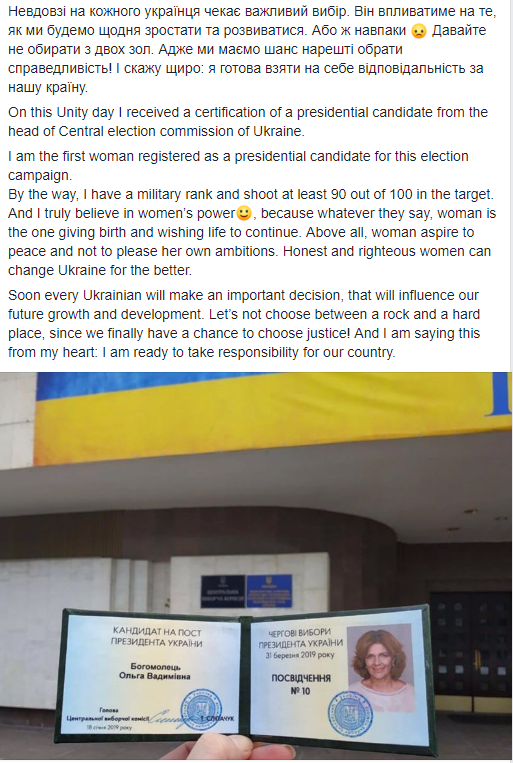 Olha Bohomolets was the first woman to be registered as a candidate for the coming elections. She has stated in interviews that it is a woman as the country's President who can improve the situation in Ukraine. Although she positions herself as a strong woman, Bohomolets avoids the issue of gender equality in her program. She mentions a fair attitude to family values; though, it is about social assistance and the responsibility of parents.

Bohomolets comes from a well-known dynasty of Doctors. During the Orange Revolution she coordinated medical services on Maidan and was the private doctor of President Yushchenko. While being a Doctor of Medical Sciences and a Professor, Bohomolets is also famous for her singing, philanthropism and social activities. For instance, she actively participated in the Revolution of Dignity and organized a hospital for the wounded at the Ukrayina Hotel in central Kyiv. It helped her gain credit from Ukrainian people for the upcoming presidential elections in 2014. 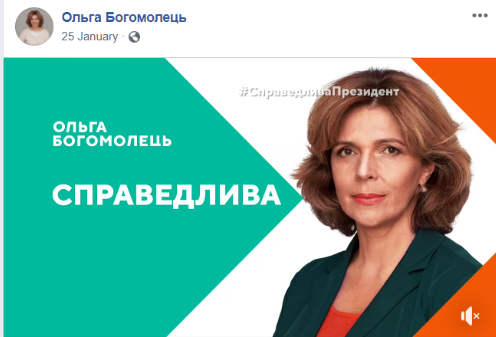 In 2014 approximately 340 000 people voted for Bohomolets (the 8th result out of 23).Since 2014 she has been an MP from Petro Poroshenko Bloc "Solidarity" and the Chair of the Verkhovna Rada Committee on Health Issues. However, in 2017 a number of NGOs wrote a letter to Poroshenko to recall her from this position.

There are two main discourses in Bohomolets's election program: the discourse of Justice (#FairPresident) and a State Without Oligarchy. She is demanding compulsory medical insurance, compensation from Russia and ensuring implementation of all-Ukrainian and local referendums. Nevertheless, these promises are likely to remain on paper: she bitterly opposes the health sector reforms carried out by acting Health Minister Uliana Suprun, with some civil society activists saying this opposition can be linked to her personal business interests.

On February, 27 Yulia Tymoshenko held the "Quality and affordable medicine" forum within her New Course. Olha Bohomolets was one of the invited guests. Should we expect a new member in Tymoshenko's party soon?

Inna Bohoslovska , a lawyer,promises to "ensure equality of all citizens regardless of their sex, language, nationality, religion, sexual orientation." She uses the word "sex" in terms of biological determinism instead of socially constructed "gender." However, it is a common practice for Ukrainian politicians to avoid using the word "gender."

Bohoslovska has been actively involved in Ukrainian politics since 1998. In the 2000s her name was connected with Pinchuk, a Ukrainian oligarch and son-in-law of Ukraine's second President, Leonid Kuchma. However, Bohoslovska denies his sponsorship, calling him just "a friend". In 2005 she became the leader of the Viche political party. After losing the Parliamentary elections, Bohoslovska joined the Party of Regions (Yanukovych's party), which enabled her to retain her status as an MP and a Vice Chairwoman of Parliamentary committees. In 2010 she was among those MPs who voted in favour of prolonging the stay of the Russian Black Sea fleet in Crimea. Moreover, her vote for adopting legislation on strengthening Russian language (widely known as the Kivalov & Kolesnichenko law) was counted though she was absent in Parliament on that day. In 2013 Bohoslovska, together with 147 other MPs from the Party of Regions and Communist Party of Ukraine asked the Sejm of Poland to recognize the Volyn Tragedy as a genocide of the Polish people. This was considered to be an anti-Ukrainian act by the Ukrainian public.

The motto of her campaign is "The only independent." However, it can be treated in two ways: either she as a candidate is the only one who is not dependent on anyone (first of all, on oligarchs) or it appeals to Ukraine as a united and independent state. Anyway, the main discourse of her campaign is to fight the country's oligarchs and create a state with rule of democracy. Bohoslovska is quickly adapting to the situation in Ukraine: if in 2010 she called Russia "a special partner," today she asks to refuse cooperation with Russia. She also suggests to invest into Ukrainian language development. Bohoslovska presents one more instrument of democracy – people's viche that will allow Ukrainians take part in the adoption of legislation.

Does she have any chance of winning the race this time? Ukrainians are interested in new faces and so this does not apply to Bohoslovska.

At the same time Yulia Lytvynenko is definitely a new face in presidential elections race! But who is she, and what does she have to say about women's rights?

Yulia Lytvynenko is a well-known TV journalist: in 2013 she won the Teletriumph prize, and in 2015 she won the All-Ukrainian Prize "Woman of the III Millennium." She is originally from Kryvyi Rih, also the home town of Volodymyr Zelenskyi. She has been living in Kyiv since 1999 and worked on different national channels: ICTV (belongs to Pinchuk), K1 and Inter (belong to Inter Media Group owned by Dmytro Firtash, a Ukrainian

A number of Ukrainian experts regard Yulia Lytvynenko a "technical candidate" of Petro Poroshenko. After analyzing promo videos of her campaign it is clear that she is against Tymoshenko and Zelenskyi, who are considered to be Poroshenko's main opponents at the upcoming elections. For instance, she calls Zelenskyi "a servant of Kolomoiskyi" as an alternative to "servant of the people" (the motto of Zelenskyi's campaign). Besides, in various interviews Lytvynenkostates that she was forced to stop her own TV show on Inter when Zelenskyi worked as a producer at the channel. She also accused Zelenskyi of holding an unlawful election campaign; however, the Supreme Court considered her claim to be unfounded and dismissed it.

Lytvynenko avoids the issue of women's rights in her program. Instead, she concentrates on issues that are now out of date. For instance, Lytvynenko wants to establish an e-procurement system … which already exists in Ukraine (ProZorro). Moreover, she suggests that teachers should participate in international cooperation projects (though Ukrainian teachers are involved in various international programs). So, Lytvynenko is not presenting anything new in her program. It seems that she has another aim for the coming presidential elections. And it is definitely not about winning the race.

After analysing the programs of all the female candidates we found out that none of them raises the particular question of gender equality and fighting sexism. Though it is a burning issue in Ukraine today, it is not an issue for female for candidates. This can also be explained by their fear of losing voters that are rather conservative in their views or still not ready (and unwilling) to solve these problems.

According to the latestsurvey by the Sociological Group "Rating", 18.8 % of Ukrainian electors are ready to vote for Yulia Tymoshenko, 0.2% will give their votes to Olha Bohomolets and 0.2% – to Inna Bohoslovska. However, there are a few weeks left for people to make their choice. Nevertheless, we should not expect radical changes in the percentage of people voting for other women candidates, except for Yulia Tymoshenko, who is still in the top 3 candidates.

Interview With Military Expert: How Russia Uses The Arms Trade To Expand Its Global Influence

The first round of Ukraine's Presidential elections took place on 31 March, while the second round is set for 21 April. This article is your go-to place for all...
PODCAST
April 18, 2019