April 26, 2019
Russian President Vladimir Putin did not congratulate Volodymyr Zelenskiy on his presidential election victory. It does not mean the Kremlin refused to support him though. If we look at the news on Russian state media outlets, we can see that they mention Volodymyr Zelenskiy mostly in a neutral or positive manner. 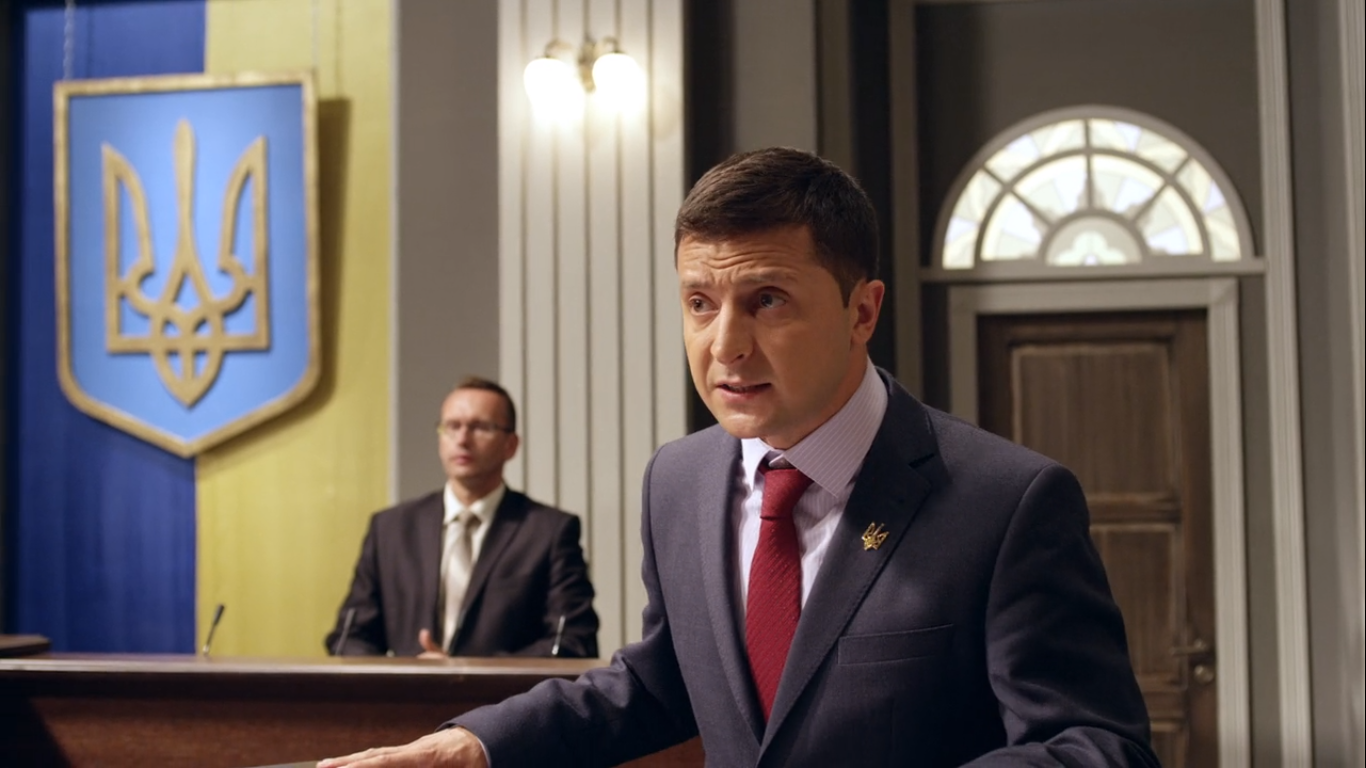 Before the second round of the Ukrainian presidential elections, the Kremlin's media created a very positive image of Volodymyr Zelenskiy. He was highly praised even by TV-hosts Dmitriy Kiselyov and Pyotr Tolstoy, who are famous for their very critical position towards modern Ukraine.

Suddenly, as soon as Ukrainian exit-poll results confirmed Volodymyr Zelenskiy's victory in the second round of the presidential elections, the Kremlin media made their rhetoric more indirect and careful. They do not praise him a lot and do not prejudge him. At the same time, the majority of Kremlin media outlets avoid mentioning that Volodymyr Zelenskiy criticises Vladimir Putin.

We have selected the most common narratives about Volodymyr Zelenskiy appearing in Russian state media outlets over the last week.

Narrative #1: No doubt that Zelenskiy won the elections

In their typical manner, the Kremlin media reported the lack of stability in Ukraine, blaming it for "farce" and "entire fog" in national politics. They also reported about "mass falsifications" (from 04:00) and "thousands of violations" during the election process.

At the same time, not a single Russian state media outlet doubted the legitimacy of Volodymyr Zelenskiy's victory.

This legitimacy was confirmed by international observers.

Narrative #2: Zelenskiy will be a good president

The official authorities of the Russian Federation do not comment on the personality of Volodymyr Zelenskiy. Therefore, Russian media use quotes from other people -- Russian experts, Zelenskiy's friends, fringe Ukrainian politicians, etc. All those people are biased; therefore, they highly praise Volodymyr Zelenskiy, calling him "one of the most decent, honest, and kind people," saying that "he will be a good president," characterizing him as "politically virtuous," and calling his victory an "electoral Maidan."

Narrative #3: Zelenskiy is an independent figure, not supported by oligarchs

Before the first round of Ukraine presidential elections, the Kremlin media did not forget to mention again and again that Volodymyr Zelenskiy was influenced by his business partner, Igor Kolomoisky. Before the second round, these voices became weaker. And after the announcement of the results of exit polls, almost all the Kremlin's media outlets forgot to mention Igor Kolomoisky or other Ukrainian oligarchs when talking about Zelenskiy. The exception is Ukraina.ru and some other websites, which sometimes remind their readers about this business partnership.

Some Kremlin media outlets try to present Volodymyr Zelenskiy as a supporter of the Russian Federation's discourse. For example, RT, Vzglyad.ru and others reported that Zelenskiy's team will punish all Ukrainian state officials guilty for the war (Russian media call it "a conflict") in the Donbas region. Such news helps Russia to confirm their claim that there are no Russian military troops in Donbas and only Ukraine is to be blamed for the war there.

In fact, Zelenskiy's advisor Ivan Aparshin wrote: "the truth about Ilovaisk, about Debaltseve, regarding the beginning of the war in 2014, regarding the annexation of Crimea - will be made public." In addition, Zelenskiy himself talks about Russian aggression in his interview to Ukrainian media.

Narrative #5: Zelenskiy is a new Trump or Reagan

The Kremlin media call Volodymyr Zelenskiy "a new face in politics" and compare him to U.S. Presidents Donald Trump and Ronald Reagan.

Meanwhile, they forget to mention that, unlike Zelenskiy, Reagan had a lot of political experience and Donald Trump enjoyed a lot of success as a businessman before either of them took up the presidential post.

In fact, despite the criticism of Poroshenko, Western media also wrote a lot about Zelenskiy's weaknesses.

In their reports about the election debates held between Poroshenko and Zelenskiy, the Kremlin's media do not hesitate to claim that Zelenskiy looked much better than Poroshenko -- more confident, more persuasive, and stronger.

At the same time, Ukrainian and Western media were not so confident about Zelenskiy's victory in the debates, talking about approximately equal scores for both candidates.

In fact, Zelenskiy has never promised an amnesty to the people mentioned in the Russian media as "political prisoners".

Narrative #9: Crimean Tatars and other supporters of Poroshenko are fleeing to Zelenskiy

Citing some odious experts like ex-Ukrainian Party of Regions MP Oleg Tsaryov, Russian media predict that Poroshenko's supporters will flee to Volodymyr Zelenskiy as soon as possible. Moreover, Ukraine.ru in its article "Crimean Tatar Mejlis invites Zelenskiy to bargaining" even assume that Crimean Tatars will betray Poroshenko and support Zelenskiy.

Ukraine.ru gives no evidence to support its headline. And the fact is that Crimean Tatars continue supporting Petro Poroshenko in his opposition to Volodymyr Zelenskiy.

Narrative #10: Washington rules Ukraine and it will rule Zelenskiy too

And one narrative remains the same -- the Kremlin media are sure that the United States defines all the processes taking place in the Ukrainian establishment.

"Petro Poroshenko can be held criminally liable for corruption. However, the U.S. authorities gave him security guarantees and warned the winner of the presidential election, Vladimir Zelenskiy, that his predecessor could not be punished," Ukraina.ru reported. "Freedom is when the state itself decides what is best for its citizens. And independence is when someone else decides," Pyotr Tolstoy says on Channel One Russia in his program about U.S. influence over Ukraine.

In fact, there is still no information about Zelenskiy's negotiations with Washington.

How can these narratives be interpreted? It looks like the Russian president is satisfied with the results of the Ukrainian elections, but does not want to show his direct support for the newly-elected president of Ukraine.

There can be several reasons for such a decision. First, Putin can still not be sure whether Zelenskiy will be easily manipulated and pro-Russian oriented. Secondly, if Putin recognizes that Ukraine got a Russian-speaking president with no roots to ultra-nationalists parties, he will have to confess that there are no threats for Russian-speaking Ukrainian citizens in Donbas; therefore, no Russian military troops are needed there to defend them from mythical "Nazis". Thirdly, if the Kremlin announces that "their" candidate won, it can be easier to blame the Russian authorities for their interference in Ukraine (and not only Ukraine) elections.

At the same time, the truth is that Zelenskiy's public statements are mostly anti-Kremlin. For example, in an interview to RBC Ukraine he says that Putin is an enemy and Russia is an aggressor. In an interview to the 1+1 TV channel he says that his example can motivate Russians to change their president too. In addition, he calls on stepping up diplomatic and sanction pressure on Russia in his team's statement regarding the new Russian law on simplifying the issuance of passports to citizens of Ukraine in the occupied territories of Donbas. All these citations signal that Zelenskiy probably will not be as pro-Russian as the Russian media want him to be.

10 Things To Know 10 Days Before The Snap Elections

Ukraine’s snap parliamentary elections will take place in 10 days time. We have prepared a “survival guide” for you: here are 10 key things to know ahead of the...