September 12, 2022
The story of Iryna, who survived the occupation in a village in Chernihiv Oblast. 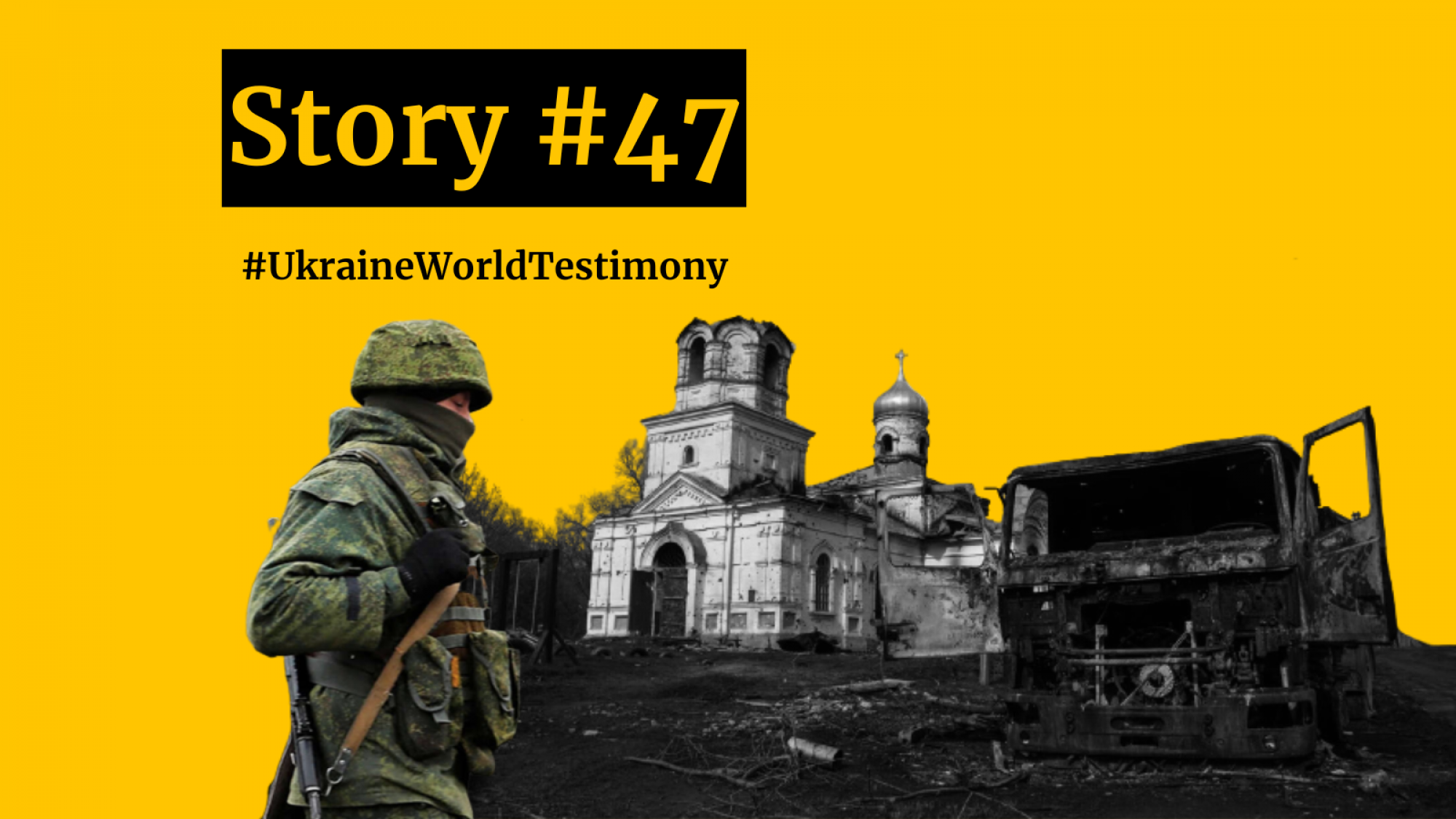 9 pm on Feb. 23. My mother ran to me in a panic and told me that her director called her and urged to go to the West of Ukraine, because Russia was going bomb us that night.

I got angry because of her panic. I turned on the TV and said: "Look, there are TV shows and entertainment programs on all TV channels! Wouldn't we have been warned about such a thing?" I just didn't believe it or didn't want to believe it.

Feb. 24, 5 am - the first missile attack on the military unit of our city. I immediately understood what was happening. Mimi (Iryna's dog) barked furiously. I grabbed her in my arms and ran into the room where the windows overlook the field and the military unit. I saw two more explosions.

I started to cry and panic. I called my husband (he's a trucker) and shouted: "Kitty, we're being bombed!" He was in shock, but he tried to calm me down. He told me what to do, because I didn't understand anything at all: "Dress as warm as possible, because you will freeze in the basement!"

I collected documents and essentials for myself and Mimi. Then I called my brother and my mom (we live in the same house), we met and to the sounds of rockets flying above us, we ran to the basement of the nearby kindergarten.

In the basement, I called my relatives and friends to find out how they were. Then we decided to go to my grandma's in a village in Chernihiv region. Who needs that village? Unfortunately, nobody thought about the fact that the Kyiv highway passes through the village.

We left. On the way, we encountered our tanks and APCs. It was creepy. We reached the village before it got dark. Everyone was in their own thoughts, zero emotions. And I had only tears.

Feb. 25. We woke up and decided that we had to buy groceries, because there were a lot of us at grandma's. We went to the neighboring village, bought everything we needed. And upon returning 2 hours later, the Russians had occupied us.

They had entered the village. At all exits and entrances, they set up their checkpoints. They settled in uninhabited buildings, blew up the mobile phone tower and established a curfew from 5:00 pm.

In the first days, they robbed all the grocery stores. The fact that it was a village really saved us: you could buy eggs, milk, and cheese from locals. We ourselves baked bread in the oven while there was flour. And when it ran out, we threshed wheat ourselves. It was clear that we would not die of hunger, but morally it was still difficult.

Since the Russians were planning to break through to the capital, huge convoys of vehicles passed through our village every day. And all these tanks were marked with Z, V and O. When the columns were moving, in no case could you look them in the eye, because they would immediately shoot.

At first, the occupiers behaved calmly towards the locals, but rumors came from neighboring villages that they shot an old man who was holding a mobile phone, then shot a veterinarian who was leaving for work in his own car. Then they began to drive around the village as if they were at home. Patrols came by every hour and a half.

When they were attacked by our armed forces, the Russians went mad and looked for weak people upon whom to take out their anger. They encircled our village from all sides, and we understood that we could only wait.

In total, the village was under occupation for 37 days. I managed to get out of there on the 21st day. The fact that I had to have an operation forced me to take a risk. Before the war, my doctor had warned me about this, and I didn't have much time. So I had a plan to escape from the village.

My husband, who was working in Europe, from the very first day had developed a plan for my escape from occupation. He got home on March 12. Then he wanted to go to my village directly, but everyone convinced him that he couldn't take me until the village had been completely liberated.

We learned that only 6 km from us there were no Russians, and people were living an almost normal life. But it is possible to get there only over open ground. My cousins agreed to take the risk to bring me there. But it was necessary to carefully calculate the time in order to have time to do it between the Russians' patrols.

On March 16, we left very early in the direction of Pryluky. It was incredibly scary. But when I saw the first checkpoints with our (Ukrainian) guys, tears came to my eyes. They checked my documents and let me through. I just couldn't believe that I was free.

The next day my husband came to me. I could hardly wait for him, I said goodbye to him every day, because I didn't know if we would see each other again.

On March 18, Iryna returned with her husband and dog to Brovary, Kyiv Oblast, and from there the family went to Chernivtsi, where she underwent surgery. Iryna and her family are now safe and well.

The story of Nataliya Popko, who managed to evacuate from Mariupol with her old cat Martha.
VIDEO
March 21, 2018