October 24, 2022
The story of Lyubov from Motyzhyn, who lived in the Russian occupation for a month. 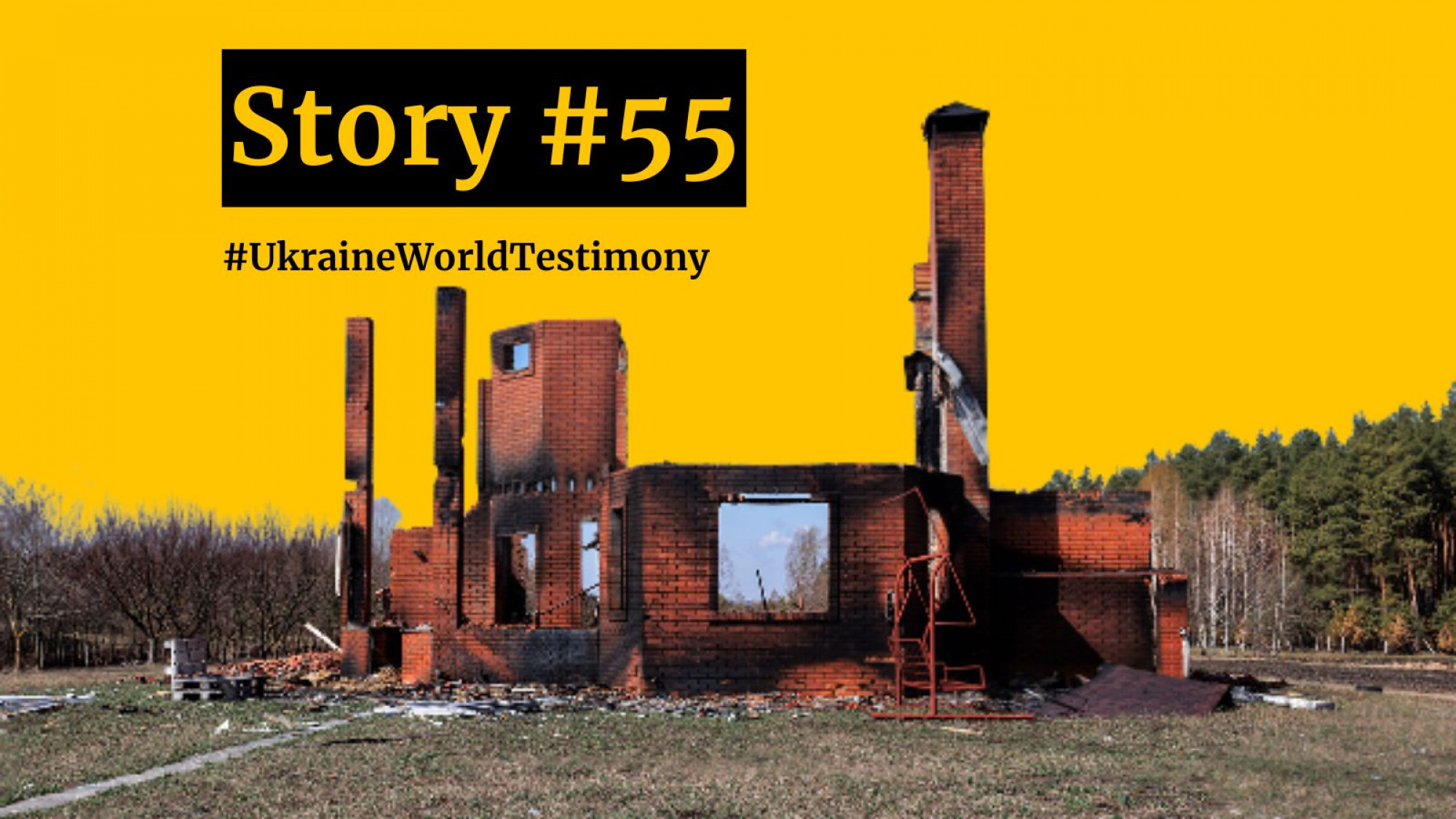 Lyubov is a resident of the village of Motyzhyn in Kyiv Region, which was under Russian occupation for a month. On February 27 the head of the village, Olga Sukhenko, reported that the Russian military was approaching.

For a whole month, Lyubov didn't risk leaving her house and walking around the village. She only heard the sounds of shelling and the movement of enemy vehicles. Usually, the Russians began opening fire every morning at around 8 or 10. If the daytime shelling stopped, local residents imagined with fear what awaited them at night.

"We could clearly hear the shels from Grads. Several houses in our village were destroyed by them. In total, more than 20 houses were destroyed in Motyzhyn", Lyubov recalls.

Some people took the risk of evacuating the village during the occupation, she said. Since there was no organized evacuation, people left in their own cars.

On the first day of the war, Lyubov persuaded her children to come to Motyzhyn from Kyiv. She could not imagine that the Russians would want anything with their village, rather than the capital. She was sure that Kyiv would be under the most fire. On March 8, Lyubov's children luckily managed to leave, but she did not want to leave her home village.

Lyubov was also lucky in that the Russians never entered her house. One day, however, they went to her neighbor's yard. Their first demands were cigarettes and vodka. They took all the alcohol they could find, even a collection of 50-gram bottles. They took blankets, pillows, sneakers, and a phone.

Many people from Motyzhyn and other nearby villages tried evacuate to safety not via the Zhytomyr Highway, which was full of Russian soldiers, but through the section from Motyzhyn to Yasnohorodka. The fact that the Russians killed many civilians evacuating through this route led to it being called the "road of death". The bodies of those murdered by the Russians were only removed after the village was liberated, Lyubov said.

The head of Motyzhyn, Olga Sukhenko, along with her husband and son, were found dead in a mass grave at the end of March. Lyubov was shocked by the news, as she had been friends with Olga.

When the Russian occupiers entered the village for the first time, they searched Olga's home, checked everything, and left. When they came to the family for the second time, they took Olga and her husband Igor. Later, they also came to pick up Olga's son. Lyubov hoped that they would only be questioned and released. But unfortunately, this was not to be.

During the occupation, the Sukhenko family gave the villagers groceries from their store, helped with evacuation, and coordinated the delivery of firewood to heat homes. Olga was elected head of the village three times because the residents of Motyzhyn loved her very much.

In one of Motyzhyn's houses, the Russians held Ukrainian volunteers who helped evacuate people and brought food to villagers during the occupation. Lyubov spoke of two such people. The Russians shot at them. One of them died instantly, while the other lay there pretending to be dead until he heard the Russian APC drive away.

After the liberation of Motyzhyn, Lyubov traveled to nearby Makariv, Lypivka, and Buzova. She was simply amazed by the scale of destruction in these villages.

Today, it is still painful for hurts Lyubov to enter or pass by the houses destroyed by the Russians and those where her neighbors were tortured. "I can't even imagine what emotions the owners of these houses feel. It's very difficult," the woman said.

Mykolaiv, a southern fortress. A podcast from our trip | Ep. 174

We went to Mykolaiv with PEN Ukraine to learn how the city is living today.
PODCAST
June 5, 2020