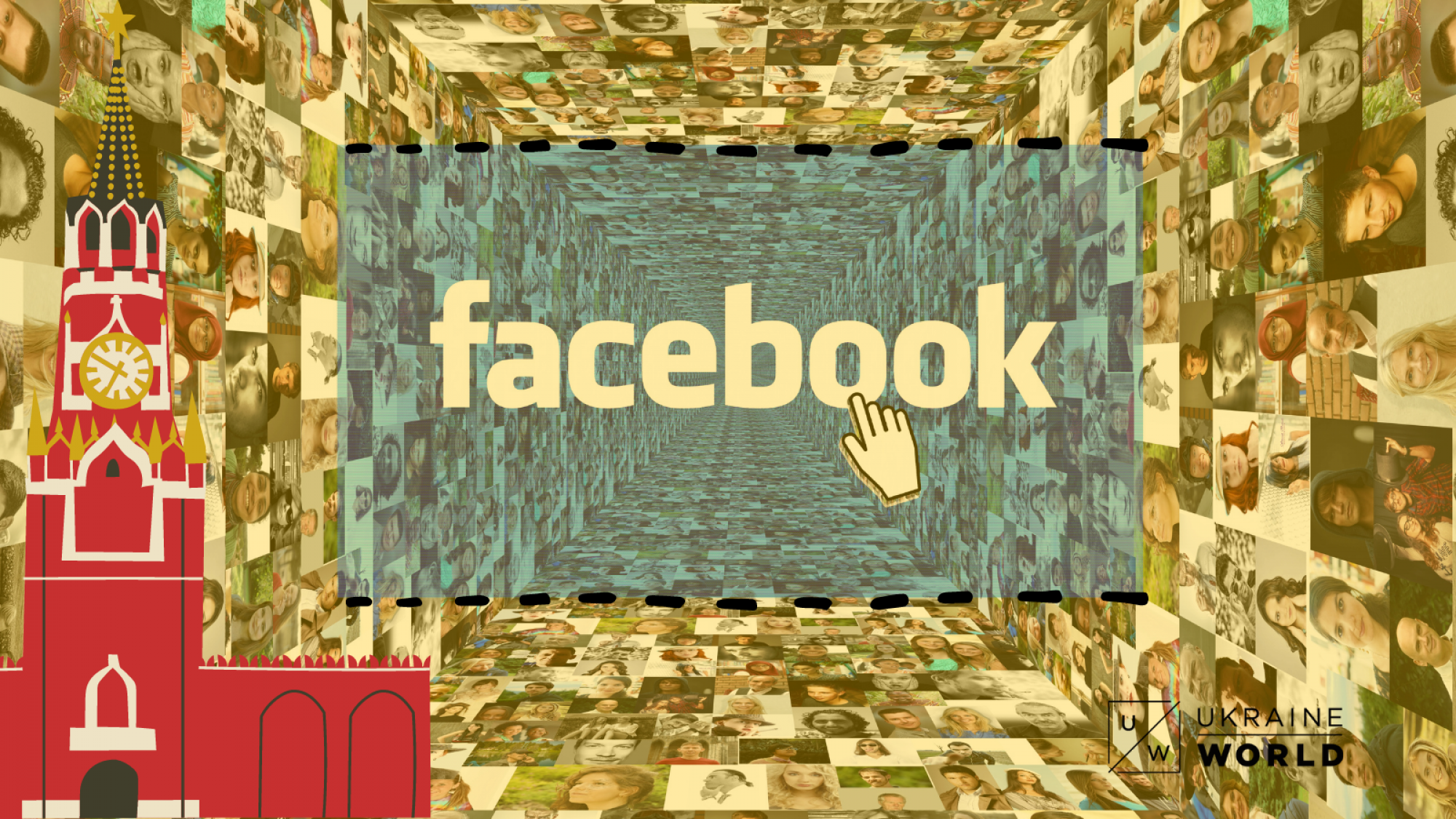 In the beginning of April 2021, as the Russian troops were mobilizing along the Ukrainian border and the situation was escalating, Facebook was flooded with all sorts of dubious news and information on the subject.

The situation is repeating itself now in November 2021, as information about another Russian military buildup on the Ukrainian border is being widely reported by the international and Ukrainian media, and officials of many countries and international organisations have expressed deep concern over the situation (for updates, follow our live coverage here).

Our monitoring of pages and groups focusing on Ukraine revealed that there are particular information campaigns being conducted targeting French and German speakers. We recently examined the narratives being disseminated on German social networks. Now, we will look at what's happening on French-speaking segments, especially on Facebook.

One of the pages that has been posting on the crisis in Ukraine is called Donbass Insider. It operates in French, but its posts mainly cover issues regarding Ukraine. The page shares news from its website, the content of which is of suspicious character.

The posts published in the beginning of April aimed to portray Ukraine as an aggressor. It's noteworthy that the page was active in spreading a story about a child killed in Donetsk Oblast near the fighting. According to posts published on the Donbass Insider, the child was killed by Ukrainian drone attack. This narrative matched that of pro-Russian outlets such as Gazeta.RU, RIA and others, which spread a story that a child allegedly died as a result of a Ukrainian drone attack. At the time, no reliable sources were confirming the story, and it was later proven to be false. Not only was the site of the alleged incident beyond the range of Ukrainian drone operations, but local sources reported that the child was killed in a tragic accident after discovering a collection of unexploded ordnance belonging to his grandfather, and that nobody heard any indication of a drone operating nearby or of a bomb falling on the area. You can read a full debunking of the story by StopFake here.

The general narrative of the posts published on the Facebook page for Donbass Insider is anti-Ukrainian, anti-Western and pro-Russian. As indicated in its 'about' section, the page represents a media outlet which operates a website by the same name. The self-proclaimed news agency operates in English, Russian and French. It purports to cover issues related to Donbass, Ukraine and Russia, as well as about connected conflicts like Syria and Libya. No information about the location of the agency or its founders is available. Additionally, the website says that it only operates based on crowdfunding.

Information about the site's domain reveals that the website is registered in Moscow, Russia under the Russian domain name registrar company: JSC "RU-CENTER".

The contact information is also registered to a Russian number. These findings indicate the agency's links with the Russia. 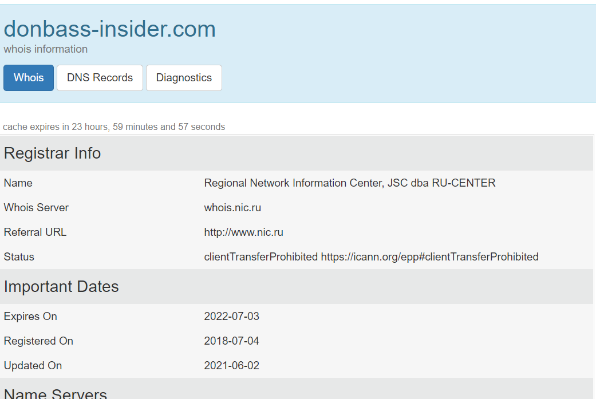 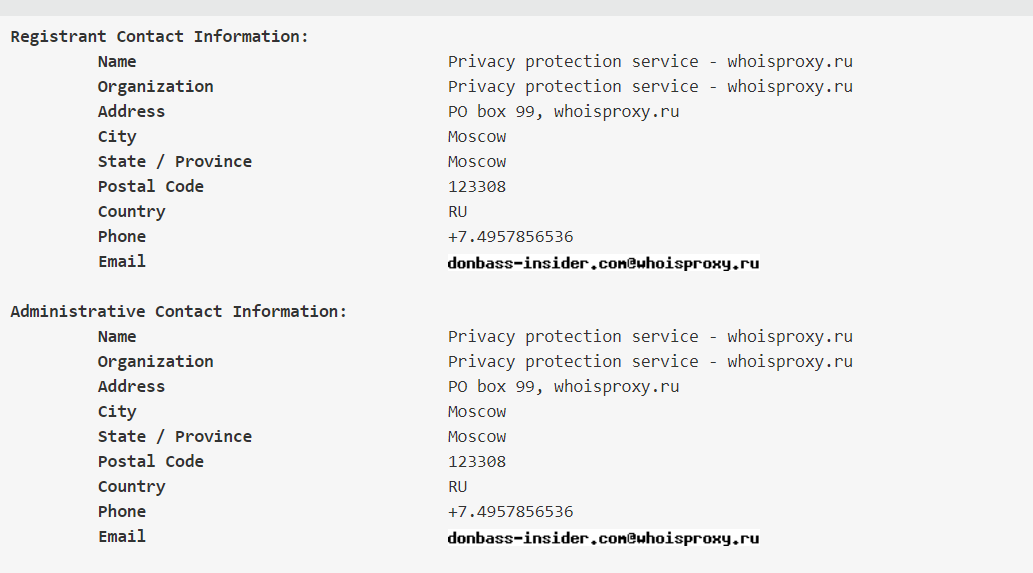 Moreover, the outlet has been previously suspected of sharing false information, and has been seen citing certain  "western" journalists for greater legitimacy. According to the EUvsDisinfo, "this trick is often used against Ukraine, and is an integral part of a common disinformation technique: creating websites and think tanks that present themselves as objective forums for the analysis of international security issues, while actually pushing pro-Kremlin narratives".

Donbass Insider mostly translates Russian language articles from suspicious outlets. Its articles are mostly drawn from Ukraina.ru and asd.news. Both of these websites are registered in Russia, and the content of their articles is pro-Kremlin. 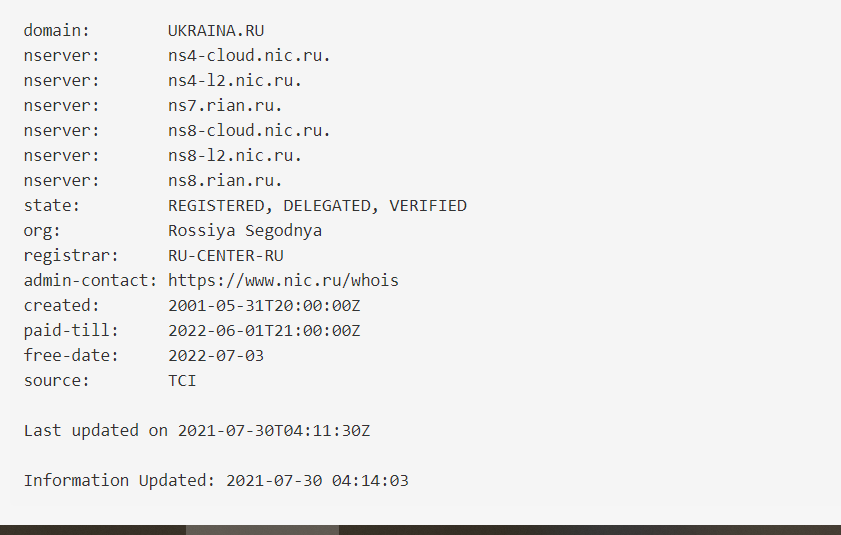 One of the main authors of the site's articles appears to be  Cristelle Néant. She is a French journalist, who has been living in the occupied areas of Donetsk region since 2016 and obtained its "citizenship". Christelle Neant works for the DONi International Press Center. The European Platform for Democratic Elections identified her as one of 48 fake election observers, based on her participation as an international "observer" during the illegitimate 2018 general elections in the self-proclaimed "Donetsk People's Republic". Respected international institutions like the OSCE ODIHR did not recognize the elections in the self-proclaimed DNR and thus did not send observers.  The practice of bringing in fake election observers aims to provide legitimacy to otherwise illegitimate elections.

Her articles are covering news are mostly of a pro-Russian, anti-Ukrainian and anti-Western character. The main messages portray Ukraine as an aggressor and responsible for violating human rights in the eastern part of the country. Some pieces also argue that the situation in Ukraine has worsened since Maidan, and point to rising American influence on Ukraine.

Evidence from its Facebook page makes clear that Donbass Insider is conducting a targeted information campaign to amplify its messages and is engaging in coordinated inauthentic behavior (Note that Facebook does not allow users to misrepresent themselves on the platform, use fake accounts, artificially boost the popularity of content or engage in behaviors designed to enable other violations under their Community Standards. See more)

Specifically, there are a number of profiles which prolifically spread misleading stories in a coordinated manner across various closed and public Facebook groups. We identified two pages and 26 groups which are engaged and/or targeted in this influence campaign. There are two particular profiles that are exceptionally productive in this capacity: Monique Gimenez and Joel Andre. 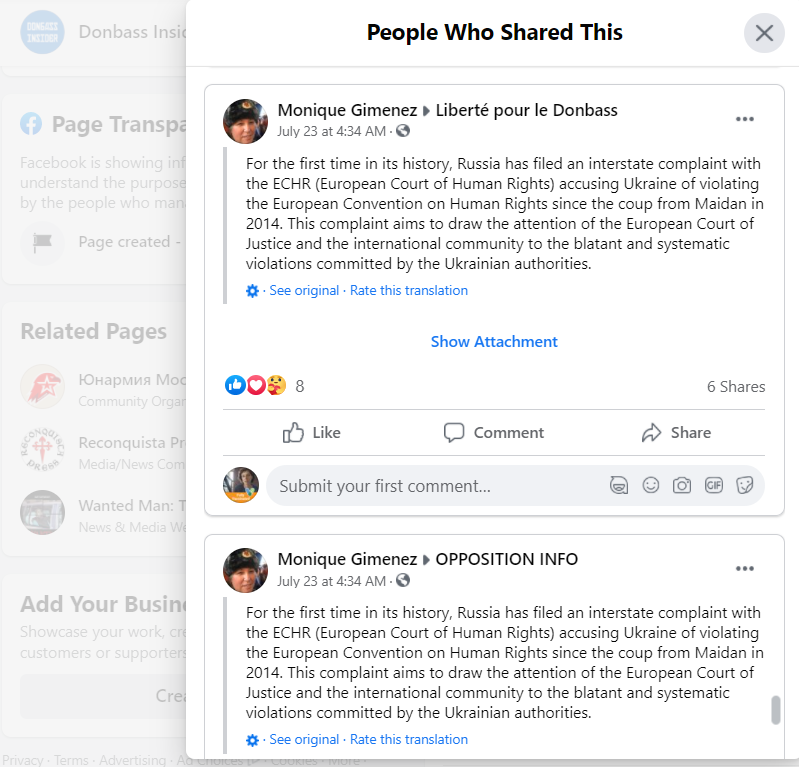 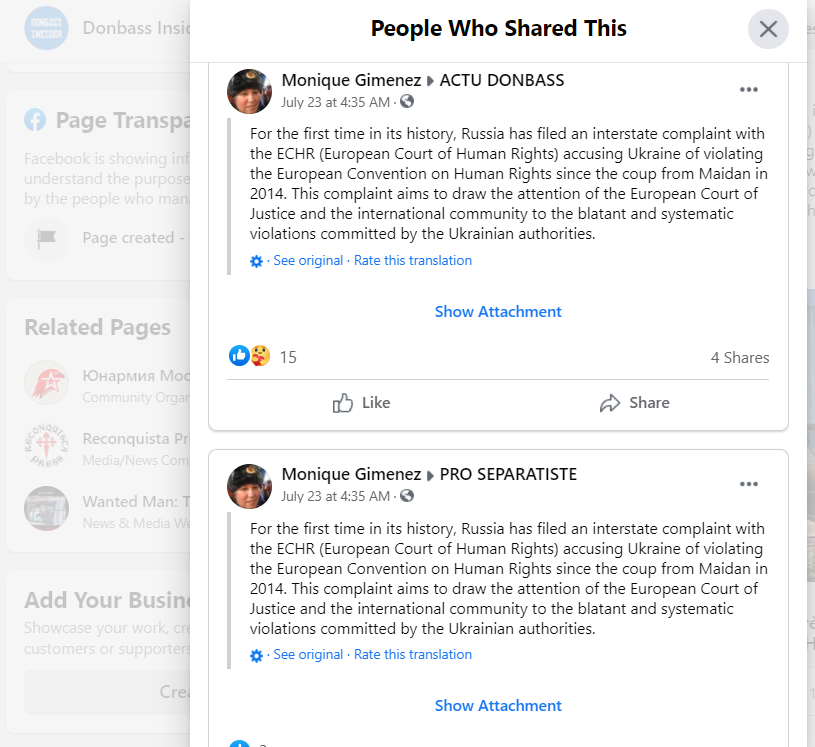 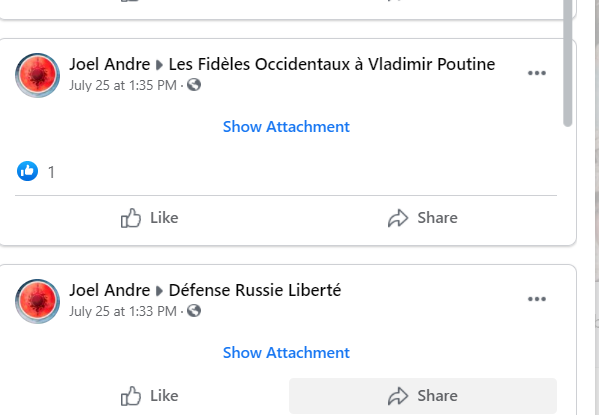 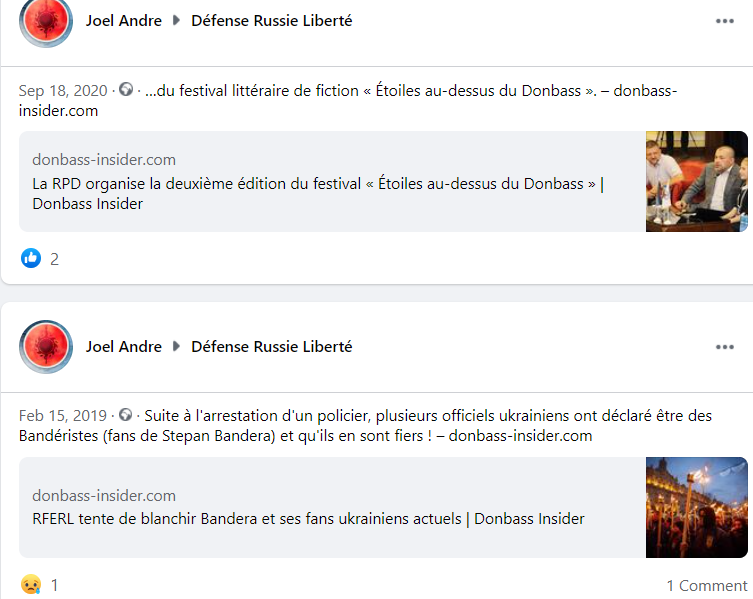 \ A profile search reveals that Monique Gimenez often provides comments for the stories by News-Front, a pro-Russian media outlet which is blocked in Ukraine. Her quotes can also be found on another pro-Kremlin outlet, Rus-vesna. In addition to sharing posts from Donbass Insider across multiple Facebook groups, she also spreads posts from the French versions of Sputnik News and RT. The Monique Gimenez profile also administers several pro-Kremlin and pro-separatist groups including PRO SEPARATISTE, Liberté pour le Donbass, and La Grande Russie de Poutine. Interestingly, some of the groups are administered together with the Donbass Insider author we mentioned above, Cristelle Néant. (Interestingly, the content is shared also by the account "Marie Christine Néant", which might have been created for inauthentic behavior. It doesn't have a profile picture and is not very active on its own page).

We can see the attempt to inauthentically amplify these posts through the unusual ratio of reactions to shares. Most stories on Facebook garner significantly more reactions than shares, but in this case the ratio is reversed. This is due to the fact that shares are mostly performed by the same accounts sending this post to different groups.

This one has 20 reactions and 55 shares.

One of the groups to which Donbass Insider's content is regularly shared is called Les Fidèles Occidentaux à Vladimir Poutine, ( Western Loyalists to Vladimir Putin). The group has 4,8 thousand members. The group describes itself as a "page devoted to the eternal Russia (l'Etérnelle Russie) and to Vladimir Putin". It also openly warns that all content published by "Atlanticist trolls" will be blocked.

Another such group is Défense Russie Liberté (Defence, Russia, Liberty). This page, in particular, supports anti-migrant rhetoric by posting anti-migrant content under the hashtag "Great replacement" (Grand Remplacement), a white nationalist conspiracy theory that believes certain forces are deliberately bringing in migrants from poorer countries to destroy the cultural and racial character of the countries they move to. Contrary to migration problem faced by the EU and US, it shows Russia as a country ruled by a strong hand which erects barriers to migration.

Another narrative promoted on these pages is that the migration crisis is part of an"Anglo-American war against Europe". Central Eastern European countries which oppose migration flows, the narrative says, should support Putin's Russia as the only true alternative to  American dominance in Europe, rather than oppose it. Ukraine is seen  in this context as another "instrument" of Washington.

The "Eurasianist" idea, which holds that the countries of Eurasia as a whole should stand in opposition to the trans-Atlantic powers  of theUS and UK, is also a narrative shared on this page. The buildup of Russian troops on the Russia-Ukraine border is presented as a justified  Russian  response to the presence of American ships in the Black Sea. The groups Défense Russie Liberté and Les Fidèles Occidentaux à Vladimir Poutine simultaneously shared a post by author Olivier de Hangest about this:

Most of these Facebook pages and group provide openly pro-Kremlin content, and their names are sometimes euphoric about the Russian president.

One such group, La Grande Russie de Poutine (Great Russia of Putin) has over 16,000 followers on Facebook. One of the articles recently republished by the page quotes "Chinese experts" saying that the West is trying to intimidate Russia, but Moscow is ready to respond. The article interprets recent escalation on Russian-Ukrainian as a sign of aggression from the West, but reminds readers of Russia's massive nuclear arsenal and modern weapons.

Another group called Tous avec Poutine! (All with Putin!) has 24,3 thousand participants. The Monique Gimenez profile is one of the key content amplifiers in this group. One article recently shared to this page by the Monique Gimenez profile criticizes Germany for delays in certifying Nord Stream II and France for "declaring a war" against Russia. 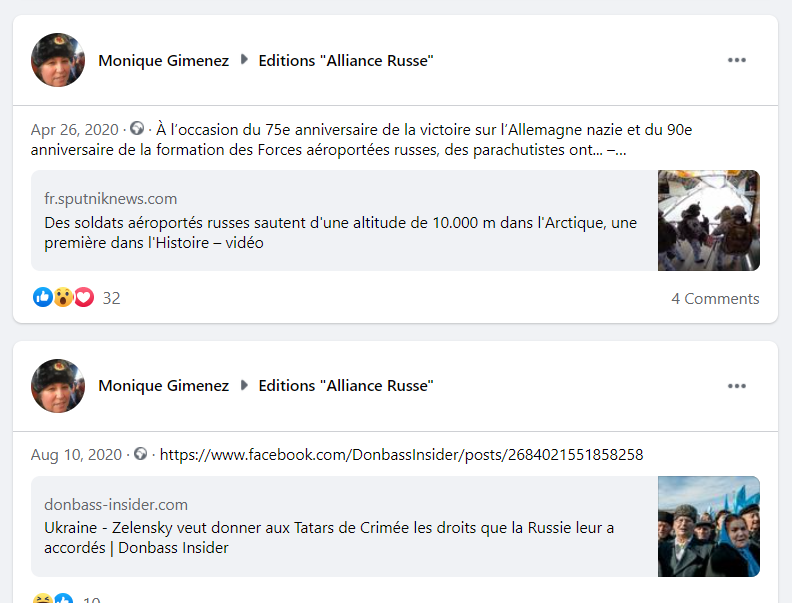 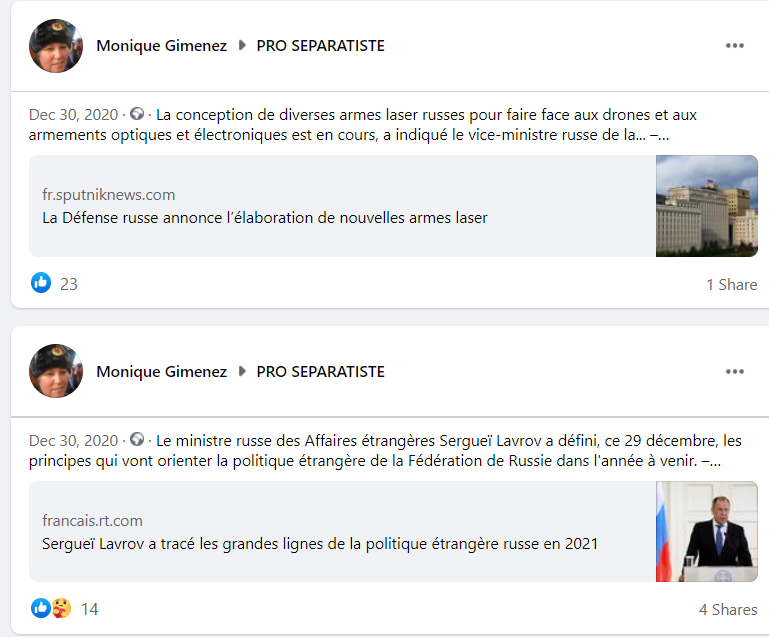 Pro-Kremlin narratives are spread in the French-speaking segments of Facebook by a set of people who are curiously industrious in this task. They send articles from websites like Donbas Insider to numerous groups and pages in order to engage as big an audience as possible. These groups and pages often have openly pro-Putin rhetoric. However, the narratives they spread go beyond mere praising of Putin and his geopolitical decisions, and address more global topics, like Europe's migration crisis, the position of the US in the world, geopolitical ideologies, and "Eurasianism". They can be seen as elements of the weaponization of weaponized information space in which information is widely spread by individual amplifiers acting as "rank and file" soldiers. Presenting themselves as people with alternative views and fighting for freedom of expression, they actually help Putin's authoritarian regime to spread its message in  Western democracies and to turn these democracies against themselves.

This article was written as part of the project Antibot: how to resist information manipulations, which is being implemented by the NGO Internews-Ukraine with financial support from the NATO Information and Documentation Centre in Ukraine. This article is the sole responsibility of its authors and may not reflect the official position of NATO.

NINO RIZHAMADZE, lawyer at the International Society for Fair Elections and Democracy;

NINI GVILIA, project officer at the International Society for Fair Elections and Democracy;

After Russia’s illegal annexation of Crimea and occupation of part of Ukrainian Donbas, the country faced sanctions from the West, including from the US and from...
PODCAST
February 10, 2022

What is it like to live under a constant threat of Russian invasion? What are the possible scenarios in the coming weeks? Listen to our new podcast.