Preparing Minds for the War: How Russian Propagandists Sowed the Seeds of and Justified Moscow’s Aggression against Ukraine

January 23, 2023
Russia has been using various narratives that justify aggression against Ukraine. 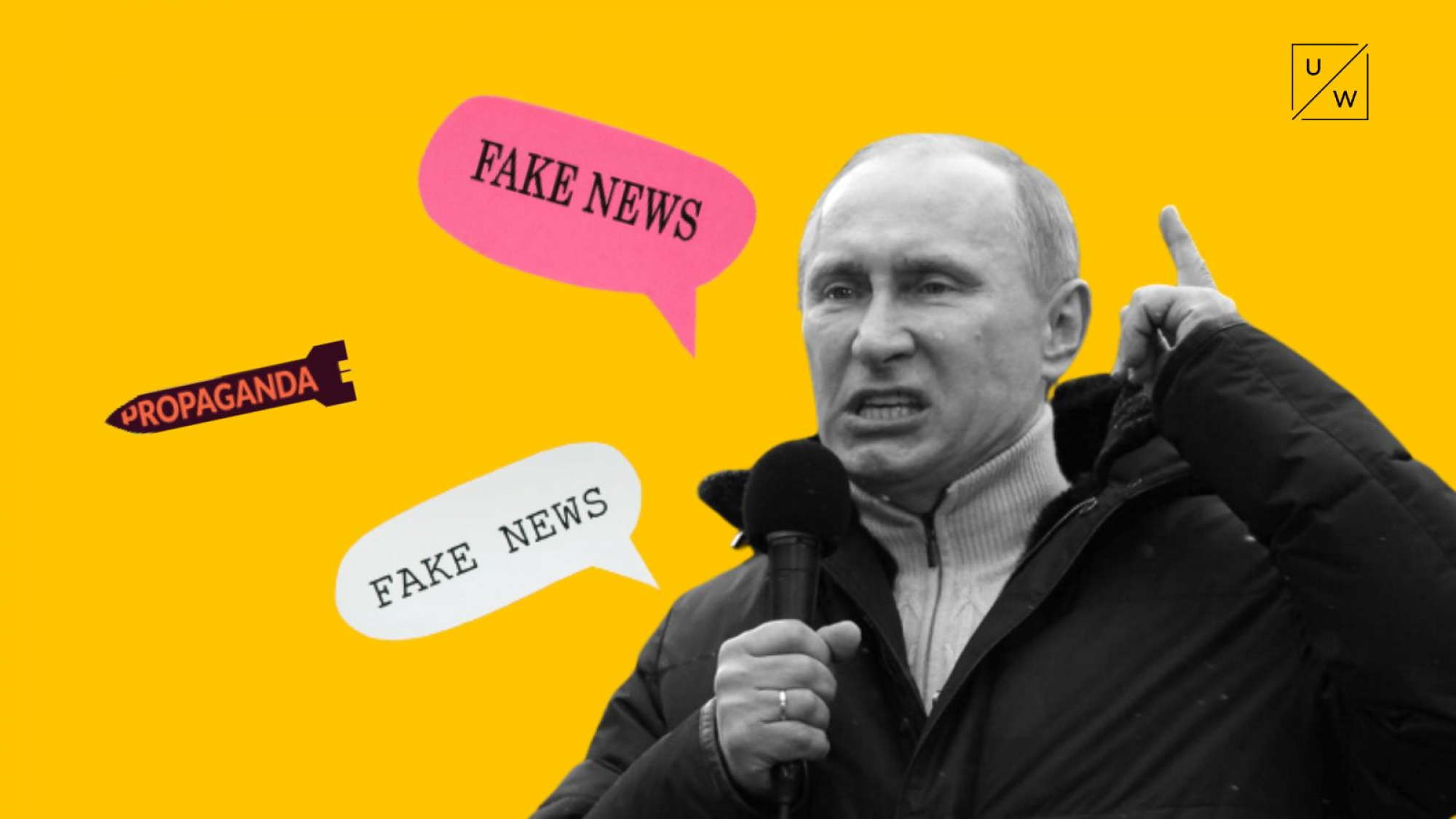 These narratives all exist in the information space simultaneously, but are each highlighted by Russian propaganda at different points.

The Russian propaganda machine pushes various justifications for their full-scale aggression against Ukraine. It may appear as if these new justifications appeared gradually, each one following and complementing the others before it. This created the false image that Russian propagandists were coming up with new narratives according to the situation on the ground, meaning that  they were reactive in their creativity. In fact, all the narratives Russian propaganda has used to justify their aggression have existed simultaneously, with some of them even being spread before the full-scale invasion. When the time would come, certain narratives were highlighted and further elaborated. Thus, Russia's information support for their aggression was highly planned  in advance.

In his address on February 24, 2022, Russian President V. Putin laid the outlines for his mouthpieces to justify the war. He discussed pretexts for his so-called "denazification" and "demilitarization" of Ukraine. The main justifications Russian propagandists use are as follows:

1. To protect Donbas from the "imminent aggression" from Ukraine.

According to Russians, Ukraine has been terrorizing Donbas (in fact occupied by Russians) for 8 years to "intimidate, to take revenge, to once again punish rebellious Donbass, which is too Russian to let it have a quiet life, and survive in general." In Putin's narration, Ukraine, supported by the collective West, was planning in February  to invade the so-called people's republics. That's why, "there is no doubt that the circumstances that forced Russia to launch this special military operation were largely instigated by other parties. I mean the US, EU and NATO. The Ukrainian government is also involved. Russia justifies its military operation because the Kiev regime posed a real threat to the ethnic Russians and Russian-speaking population in Lugansk and Donetsk."

The truth is that since its invasion in 2014, only Russia has been attacking the civilian population. Ukraine has never intentionally struck its own population. On the contrary, Ukraine has looked for ways to reintegrate its territories without causing casualties despite Russian provocations. There was no evidence that Ukraine was preparing for a counteroffensive in February 2022. Indeed, amid Russian maneuvers on the Ukrainian border and in response to intelligence from its Western partners,  Ukraine was getting ready to protect itself from the Russian attack.

2. To protect Russian people in Ukraine from the "Nazi" Ukrainian regime.

Russian propaganda has been going on about  "Nazis'' in Ukraine since the Euromaidan protests. They have been fearmongering about supposed "neo-Nazis" and "Banderites" who came to power in Ukraine after a "coup" and the dangers this posed to Russia and Russians since 2014. They were already used to justify the Russian invasion from the very beginning. Taking the case of Crimea, Russian propagandist Volodymyr Sachko told Russia's flagship state-run news site RIA Novosti that "Crimeans understood quite well what awaits them if they refused to obey the new Ukrainian authorities who came to power as a result of a coup d'etat and began to spread neo-Nazism and neo-fascism. In addition, there was a leading role played by Russia, which did its part promptly, very politely and very competently. Politely is the keyword."

Horror stories about "bloodthirsty Nazis" in Ukraine have used to prime Russians for aggression towards the country because they strongly resonate amongst Russians, who have been taught to view the victory in World War II against the Nazis with almost religious reverence. Glorification of The Victory is an integral part of patriotic education in Russia. That's why the very word "Nazi" is a trigger for Russians. It is why "In fact, we are not at war with the Ukrainian people. We are liberating them from the yoke of the Nazi administration, which occupied the government and the Verkhovna Rada." However, the truth is that Ukraine does not have high levels of radicalism or  antisemitism, which are essential components of Nazim. Only 5% of Ukrainians wouldn't accept Jews as fellow citizens, compared to 14% of Russians. The level of antisemitism in Ukraine is the lowest among the countries of Central and Eastern Europe (data from 2018).

3. To take back what "historically belongs to Russia".

The Russian propaganda machine had created this narrative before their  full-scale invasion of Ukraine. The essence of it is that Russians claim historical rights to Ukrainian territories, and that controlling them is the missing piece to ensuring Russian security. They also assert the right to protect all "Russians" in the world, which, in their understanding, are Russian-speaking people. Thus, they push messages like "Russia should become home for those who consider themselves Russians, who are bearers of the Russian culture and language, world outlook, and faith. Tere only two options seem to be available --- to expand the Russian borders and (or) return  all Russian people to Russia." Similarly, their propagandists declare that Russia's intention should be to not "capture Ukraine... but bring it back to its native place. It was captured by Banderites. Not to attack. I'll repeat - it was attacked by NATO countries. And we are bringing it back to where it belongs."

By convincing Russians that their government is on a righteous mission to take back what belongs to them, Russian propaganda seeks to rid people of any doubt that it is necessary not only to conquer Ukrainian territories, but to kill Ukrainians to achieve this goal. It is a truly Orwellian manipulation: war is peace, occupation is defense, legitimate government is a government of usurpers, and cooperation is aggression.

Even though the narrative about "Nazis in Ukraine" is omnipresent in the Russian media space, it is also mixed with stories about Ukraine as a terrorist state. It is not much different from the "Nazi" narrative in its essence, since "the terrorist threat" is also a trigger for the Russian population to go into self-defense mode.

Russia insists that it is ridding Ukraine of terrorists, harkening to a long-standing theme of Russian aggression. Thus, we hear Russia boasting about the terroristic missile attacks across Ukraine of October 10 with statements like "Acting in line with his formula voiced more than 20 years ago about destroying terrorists wherever they are, Vladimir Putin ordered the launch of a massive missile strike on Ukrainian targets." This justification goes along with calls to exterminate Ukraine in general, such as the claim by Maksim Grigor'ev, director of Democracy Problems Research Foundation, that "the elimination of this terrorist threat is possible only if this entity called Ukraine disappears."

5. To protect itself from an imminent threat from the collective West, which was going to exploit Ukraine to destroy Russia.

Russian authorities and their mouthpieces also explain the aggression against Ukraine with the supposed necessity to protect their country from a "threat from the West." They say the collective West is using Ukraine to harm or even destroy Russia. Thus, people in Russia hear explanations like "One has to understand that Russia is now engaged in a very tough confrontation. And it is not only and so much about Ukraine, as about the West standing behind Ukraine." This narrative works effectively due to the long tradition in Moscow propaganda of accusing the West, and particularly the United States, of wanting to  dominate the world and harm Russia.  This produces statements like "It's clear that this is is a war and that it should be understood by every resident of Russia  and every resident of Ukraine   who is also a Russian person. This is not a war with Ukraine, this is the war with the collective West itself. This is a war with the USA. This is a war that the USA has unleashed, and the USA has been waging with Russia for many years. This is a  war that began a long time ago, part of which was the collapse of the USSR."

This conjuring of an existential threat and the fear caused by it deprives Russians of the ability to think critically. Moreover, this justification allows Russia's war to keep going and be as brutal as possible, excusing itself as self-defense against an eternal enemy. It's also easy to use this justification to explain why the West supports Ukraine or why sanctions are imposed against Russia.

The truth is that the West was never going to attack Russia. The very fact that the West declined to provide Ukraine with the support it needed starting in 2014, that it negotiated with Russia at the expense of Ukrainian interests, and that it continued economic cooperation with Russia showed that the West was far from interested in destroying Russia.

6. War against Ukraine is existential for Russia and its civilizational mission:

This is the apotheosis of all the narratives Russia uses to justify its aggression against Ukraine. Russian propaganda presents the war with Ukraine as part of a Russian civilizational mission in which Russians have a duty "to liberate our land from this evil, and to clean from evil the soul of our people. Certainly the people who live in the territories which were earlier called Ukraine are our people. And our task is to purify their souls. And it is for this sake that all this is being done. This is what is called denazification." Russia's propagandists also assert that their country can't exist as long as Ukraine exists in its current state, declaring that This war, though it's called special military operation, is a war for further existence, who should exist further: Russia which inherited the multinationality and federative structure of the USSR, or 'Ukraine for Ukrainians', which went on the road of betraying common roots and slid into the ideals of Bandera."

Such statements not only prime the Russian population not only for aggression against Ukraine, but are calls for genocide, the crime of crimes. The consequences of these info operations have been plain to see in occupied Ukrainian cities, where people have been brutally murdered and tortured.

This type of narrative is particularly malicious, since it not only incites further violence and atrocities, but it legitimizes the war in the eyes of the Russian population and makes them believe their state is embarked upon a noble mission of their state, thus helping to mobilize Russians to continue this brutal war for as long as they see fit.

What Is the Current Situation on the Frontline?

The Council of Europe suspends relations with Belarus. Belarus Watch #23

This newsletter does not reflect the current situation in Ukraine and Belarus, but it can serve as a helpful tool to assess how the Belarus-Russia relationship in...
PODCAST
August 12, 2019