June 16, 2021
UkraineWorld takes a look at Facebook pages and groups writing about the “external governance” of Ukraine by the collective West since the beginning of the year. 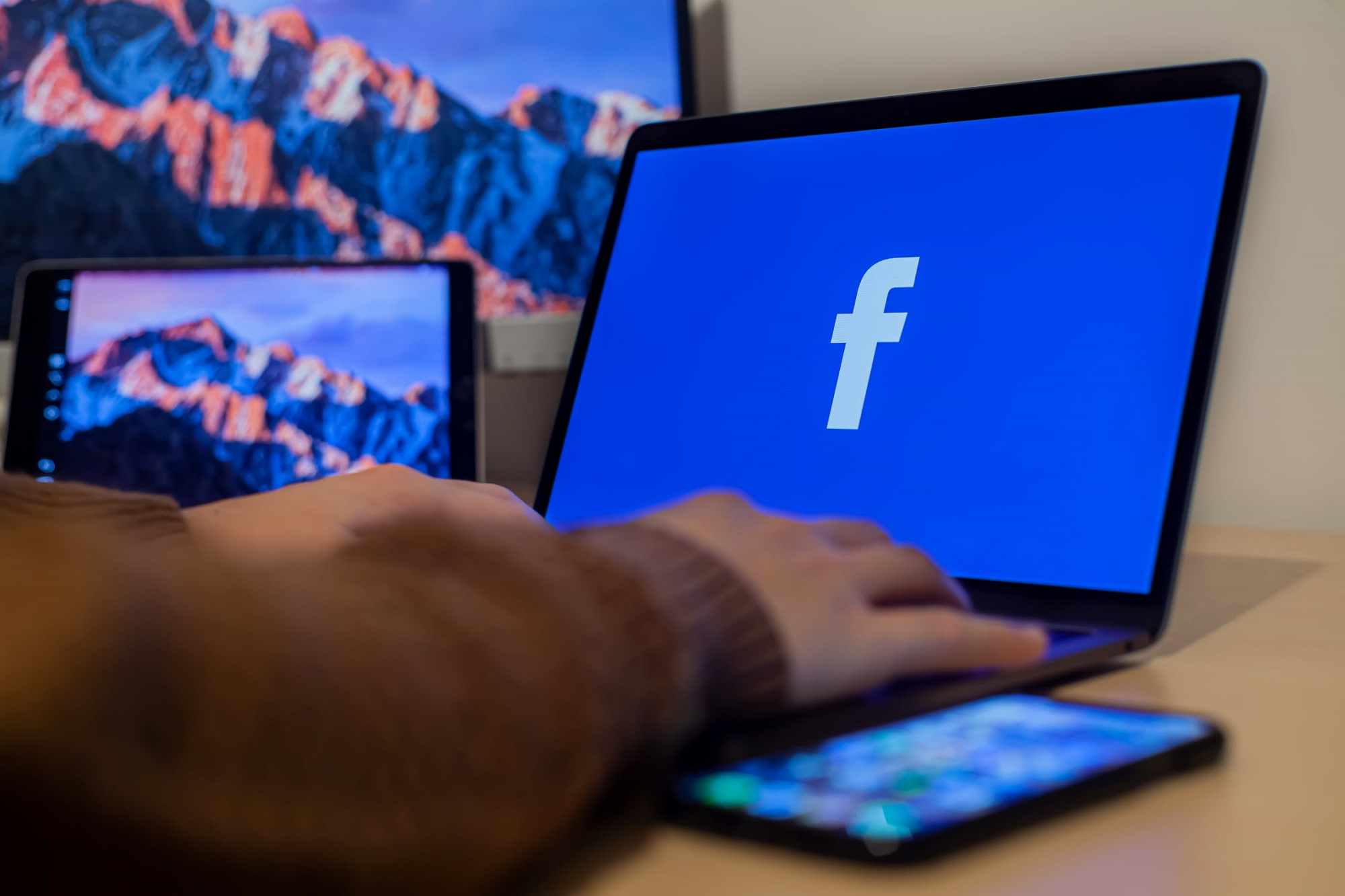 Ever since the Euromaidan in 2013-2014, pro-Russian and anti-Western media and opinion leaders have been criticizing Ukraine’s cooperation with the EU, NATO and the U.S. by spreading a conspiratorial narrative about the “external governance” of Ukraine by its Western partners.

According to this narrative, Ukraine has been under the covert external governance of Western puppet-masters, creditors, and “sorosiata” (“Soros minions”) ever since 2014. The end goal of this "external governance" is ostensibly to drain natural resources from Ukraine, control all state-owned enterprises and turn our state into a colony.

While spreading this narrative, anti-Western actors use information about Ukraine’s cooperation with the IMF, the EU and other organisations, but distort it to create a narrative according to which Ukraine lacks agency and is merely told what to do from abroad, and hence has lost its independence.

This narrative is in line with Moscow’s propaganda, which has been saying since 2014 that Ukraine is a “failed state.”

At the same time, media and opinion leaders who realise that Ukraine has chosen cooperation with the West over Russian subjugation often try to debunk the “external governance” narrative and highlight the benefits of Ukraine’s cooperation with the EU, NATO and the U.S.

UkraineWorld examined how far both these narratives play out and are received on Ukrainian Facebook using CrowdTangle, a Facebook-owned tool that tracks interactions on public content from Facebook pages and groups, verified profiles, Instagram accounts, and subreddits. It does not include paid ads, unless those ads began as organic, non-paid posts that were subsequently "boosted" using Facebook's advertising tools. It also does not include activity on private accounts, or posts made visible only to specific groups of followers.

UkraineWorld studied the most popular posts on public Facebook pages from Ukraine within January 1, 2021-June 8, 2021 in which the phrases “внешнее управление” and “зовнішнє управління” (“external governance” in Russian and Ukrainian, respectively) were used. 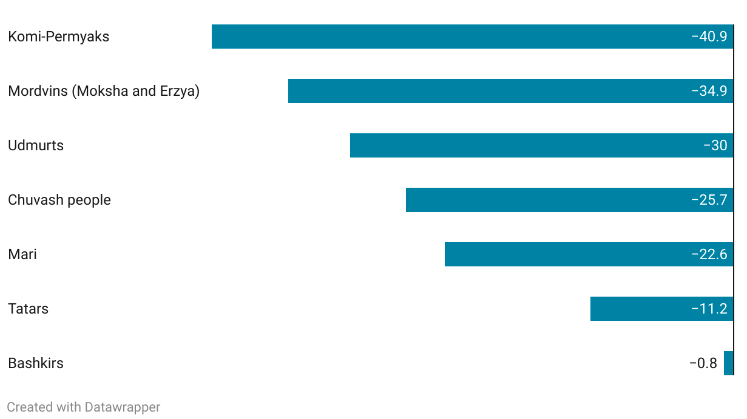 UkraineWorld studied the ten posts with the most interactions (reactions, comments and shares) for each language to see whether there was any difference in how the “external governance” narrative played out. 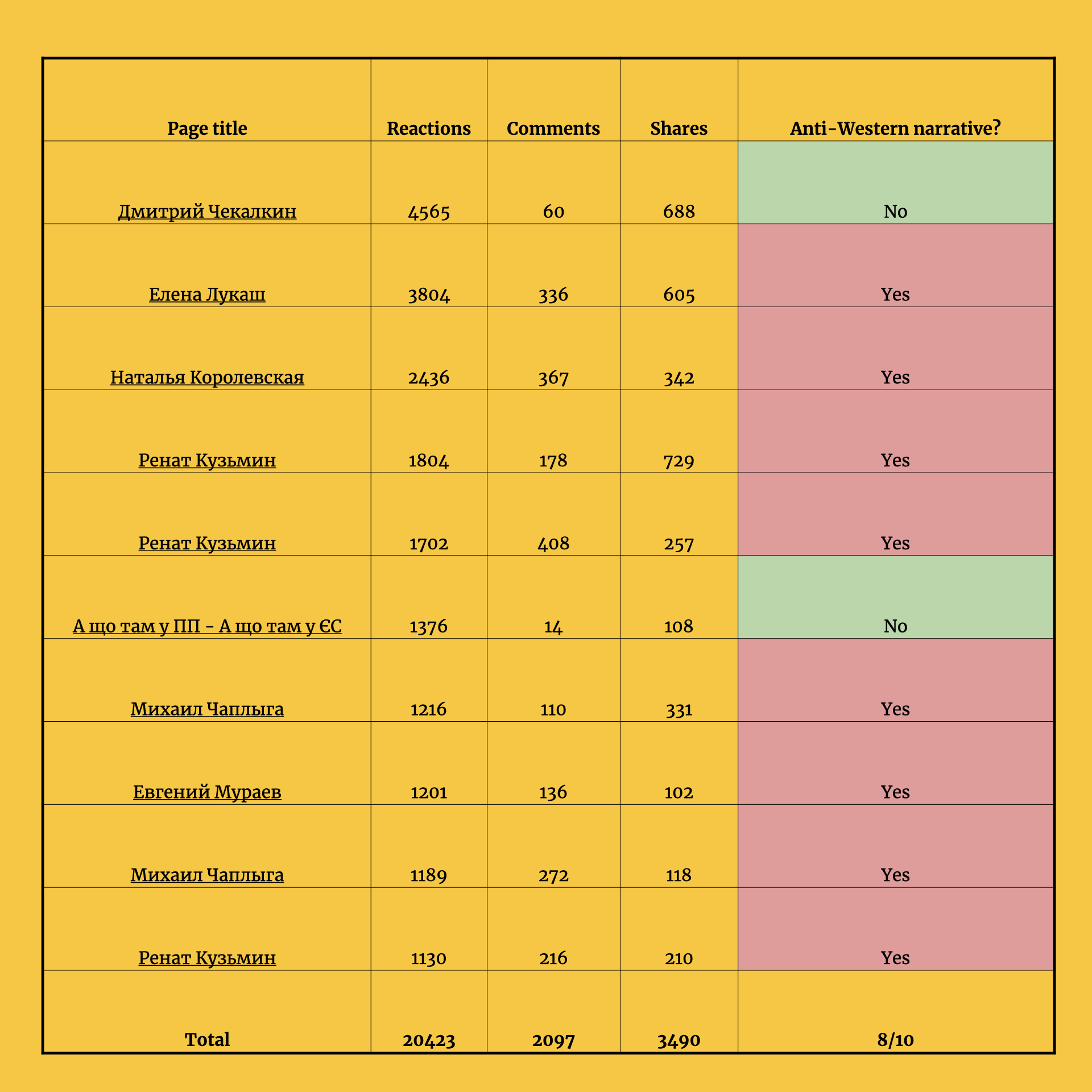 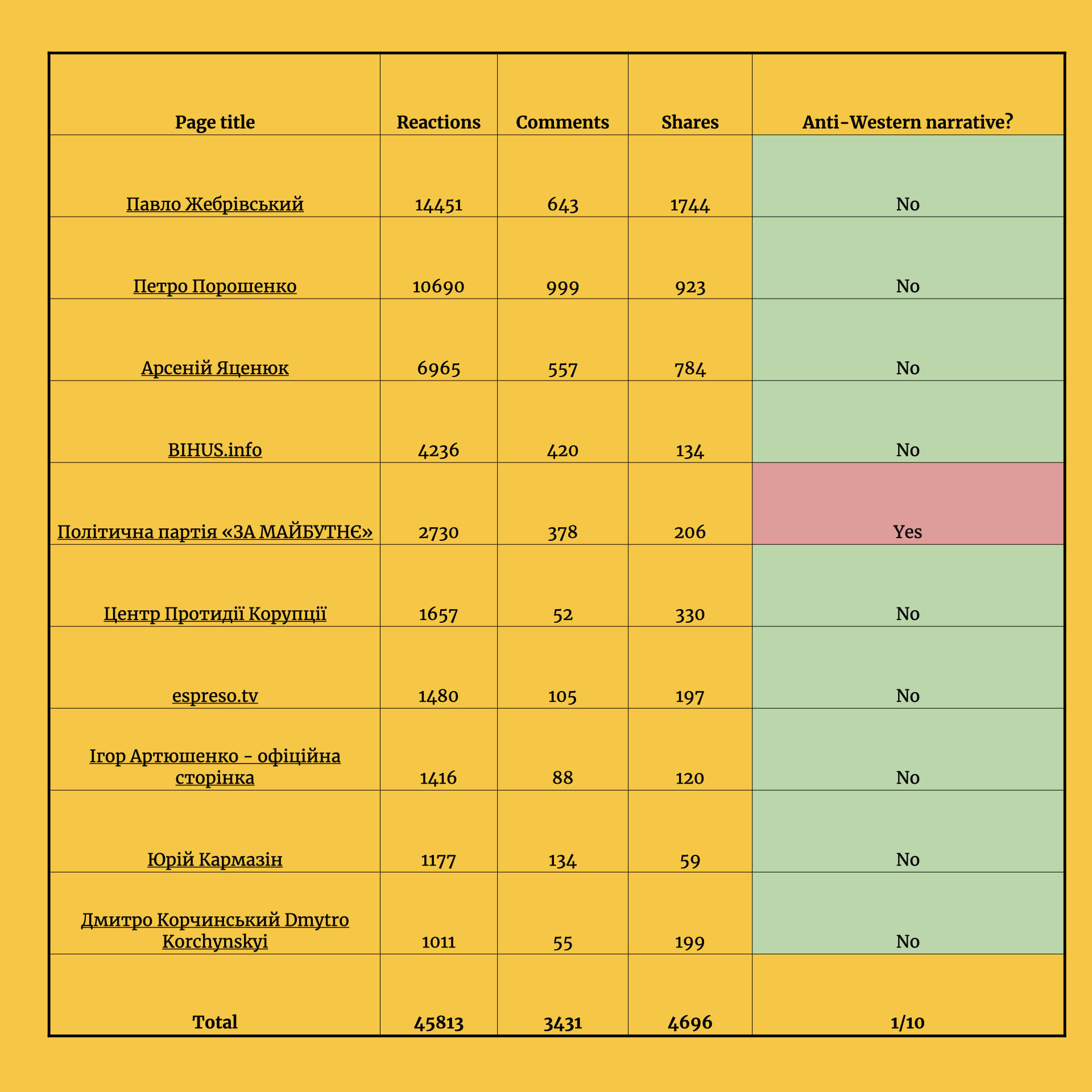 As one can see, 8 out of 10 posts in the Russian language which contain the word combination “внешнее управление” spread anti-Western conspiracy narratives, while only 1 out of top 10 posts with Ukrainian language phrase “зовнішнє управління” phrase did so.

The most popular posts in Russian were mostly written by MPs from the pro-Russian Opposition Platform—For Life party (Natalia Korolevska, Renat Kuzmin), political commentators close to the party’s leader Viktor Medvedchuk (Mykhailo Chaplyha), as well as the allies of ousted Ukrainian President Viktor Yanukovych (Olena Lukash). All their posts spread the idea of a greedy West which is robbing Ukraine. For instance, Renat Kuzmin wrote in one of his posts that “[Viktor Medvedchuk] is dangerous for Western puppet-masters [and] Western capital, which have been plundering our country and imposing external governance on it.” An example of a Russian-language post that refutes the narrative can be found on the page of Dmytro Chekalkin, a political blogger, as he criticized Ukraine’s President Volodymyr Zelenskyi for not dealing with Oleksandr Dubinsky, an MP who belonged to the Servant of the People faction at the time and would prolifically spread the “external governance” narrative.

Meanwhile, the most popular posts in Ukrainian mostly appeared on pages of politicians oriented towards pro-Maidan audiences, as well as on the pages of media and NGOs. In these posts, the narrative about “external governance” was criticized and refuted. For example, Arseniy Yatseniuk, Ukraine’s PM in 2014-2016,wrote that Russian government-controlled newswire TASS repeated Viktor Medvedchuk’s statement about Ukraine being under “external governance” and urged the Ukrainian government to put Medvedchuk in check. The only example of a Ukrainian-language post with a conspiracy narrative could be found on the page of For The Future political party controlled by Ihor Kolomoyskyi. In this post, the party blamed “external governance over Ukraine’s gas transit system” for the “utility tariff crisis” in Ukraine. We see that Russian-language discourse is much more instrumentalized to spread anti-Western conspiratorial narrative than Ukrainian-language discourse

UkraineWorld also looked at the content related to the external governance narrative which was posted in Facebook public groups between January 1, and June 8 2021.

UkraineWorld looked at the ten posts with the most interactions for each language to see whether the “external governance” depiction here differed from what we saw on public pages. 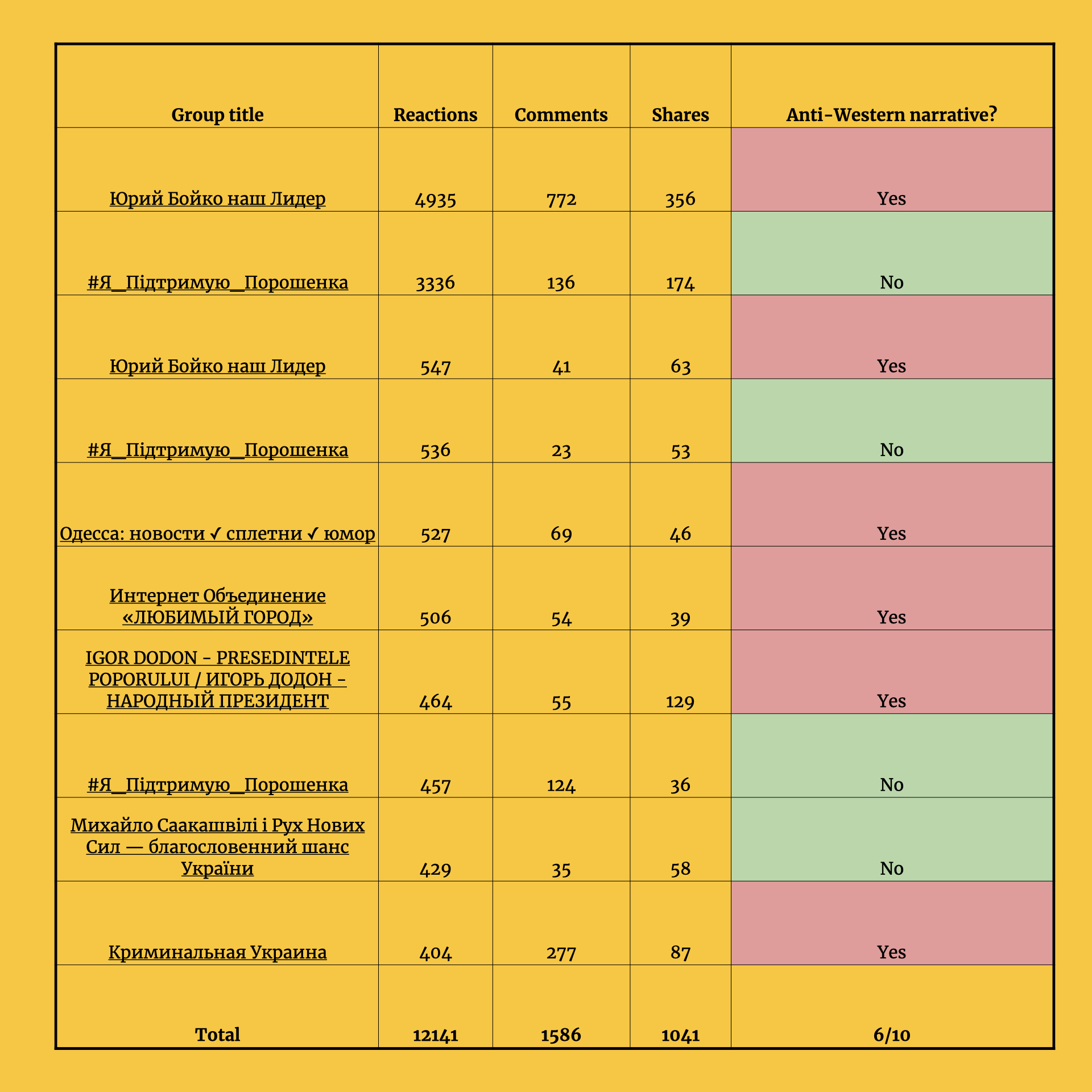 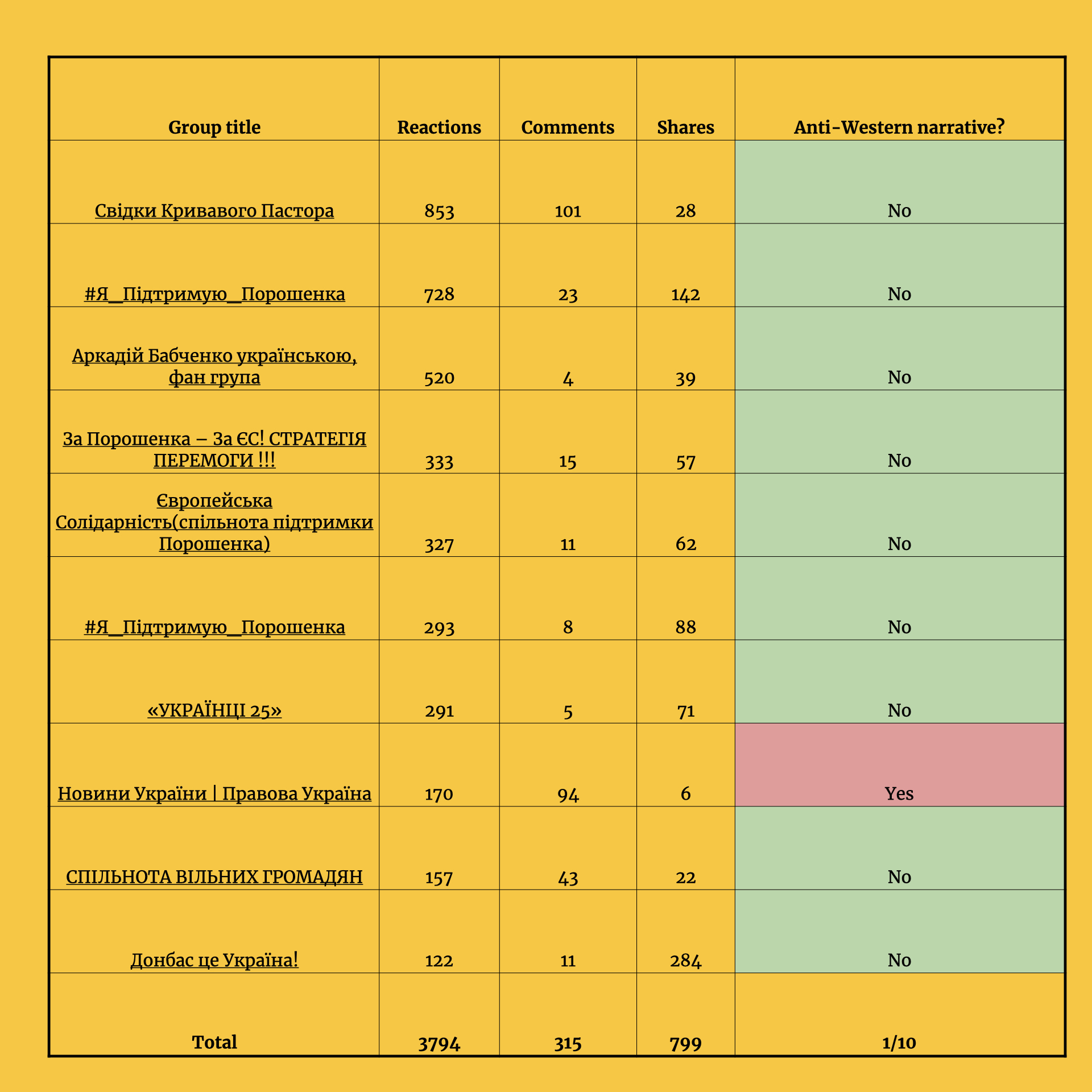 The difference between top-10 lists in Russian and Ukrainian languages is similar to what we saw while studying the most popular posts on public pages.

6 out of 10 Russian-language posts promoted the “external governance” narrative, while only 1 out of 10 posts in Ukrainian did so.

Most Russian-language anti-Western posts in public groups were reposts of statements of pro-Russian politicians. For instance, in Facebook groups Yuriy Boyko nash Lider (Yuriy Boyko is our leader) and Internet Obiedinenie «LIUBIMYI GOROD» (Internet Union “Favourite City”) a post of Mykola Azarov, Ukraine’s former PM (2010-2014) and ally of Viktor Yanukovych, was shared. In this post, Azarov writes that “[Ukrainian] people are fed up with the external governance and ready to change the situation in the country.” Another post in Yuriy Boyko nash Lider group is a share of the post of Olena Lukash, which was the second most popular post among top-10 posts with Russian-language phrase “внешнее управление” (see the previous section).

All the other posts in Ukrainian not only did not spread conspiracies about Ukraine’s cooperation with the West, but also actively refuted this narrative. It is worth noting that the plurality of these posts appeared in groups created in support of Ukraine’s former President Petro Poroshenko and his political party European Solidarity. At the same time, these posts are very critical of President Zelensky. Consider the post by Pavlo Boiko, a Ukrainian businessman, in which he lists “con artists who are acting against Ukraine” including Yulia Tymoshenko, Volodymyr Zelenskyi and Oleksandr Dubinskyi. This post was shared with several pro-Poroshenko groups, including #Ya_Pidtrymyiu_Poroshenka (I Support Poroshenko), Evropeiska Solidarnist (spilnota pidtrymky Poroshenka) (European Solidarity (community of Poroshenko supporters)).

There are far more posts about alleged “external governance” in public groups than on public pages, with 3045 and 261 posts respectively.

This means that conspiracy theories are mostly being spread in groups based on interests, not on public pages.

On the other hand, posts in public groups accumulated 58563 interactions (19 interactions per post on average), while the ones on public pages were interacted with 111122 times (425 interactions per post on average). Thus, while way more posts appear in groups, they tend to draw far less attention, and are thus likely way less effective in reaching a wide audience than posts on public pages. This is also partly due to the fact that posts from public pages are often shared in many groups dedicated to a particular topic.

Furthermore, the pages and groups which spread the external governance narrative are connected either to Viktor Medvedchuk and his party Opposition Platform — For Life or to Viktor Yanukovych.

Finally, posts that refuted the external governance narrative mostly appeared on pages and groups linked to politicians oriented towards pro-Maidan audiences such as Petro Poroshenko or Arseniy Yatseniuk.

Every day, we get hundreds of messages. Not all of them are true. Therefore, we should know the main signs of manipulation. This video was prepared with the financial...