July 5, 2021
A wide network of German-language public groups and pages on Facebook shares Kremlin narratives about NATO, the U.S. and Ukraine. 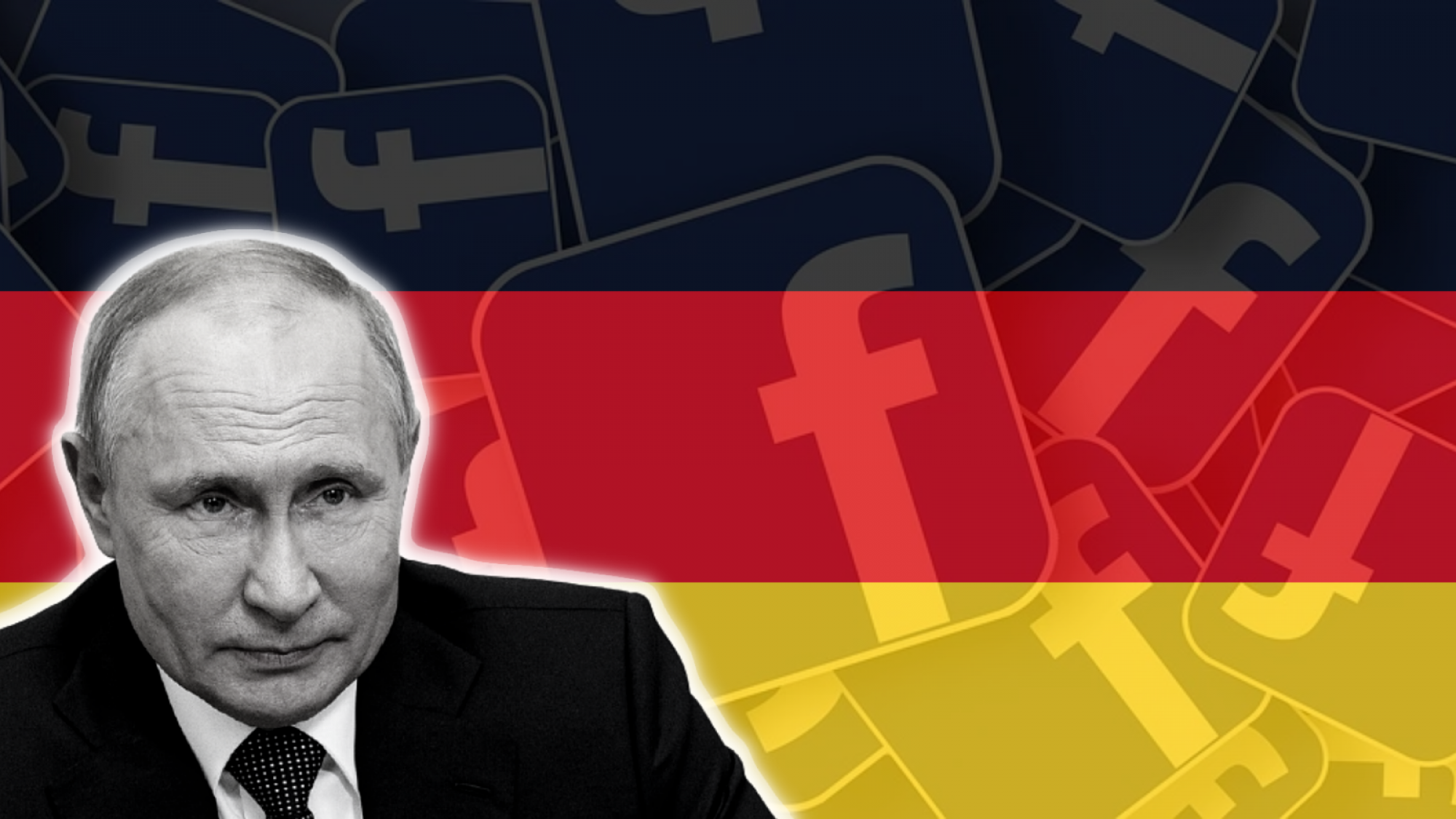 When UkraineWorld studied the activity of the popular Ukrainian news website strana.ua, we discovered that some of its manipulative articles were shared in German-language public Facebook groups Russlandversteher (The Russia Understander) and Gegen Defender 21 (Against Defender 21). We decided to study the activities of these groups further and tried to find similar communities on Facebook.

“The Voice of Donbas”

If one takes a look at the content shared in the Russlandversteher and Gegen Defender 21, there are quite a few similarities: 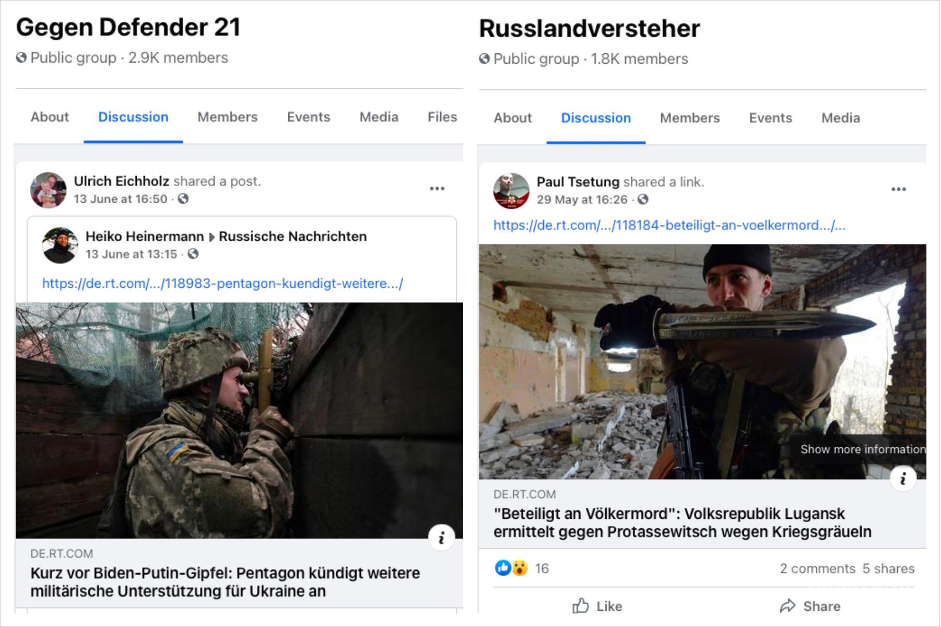 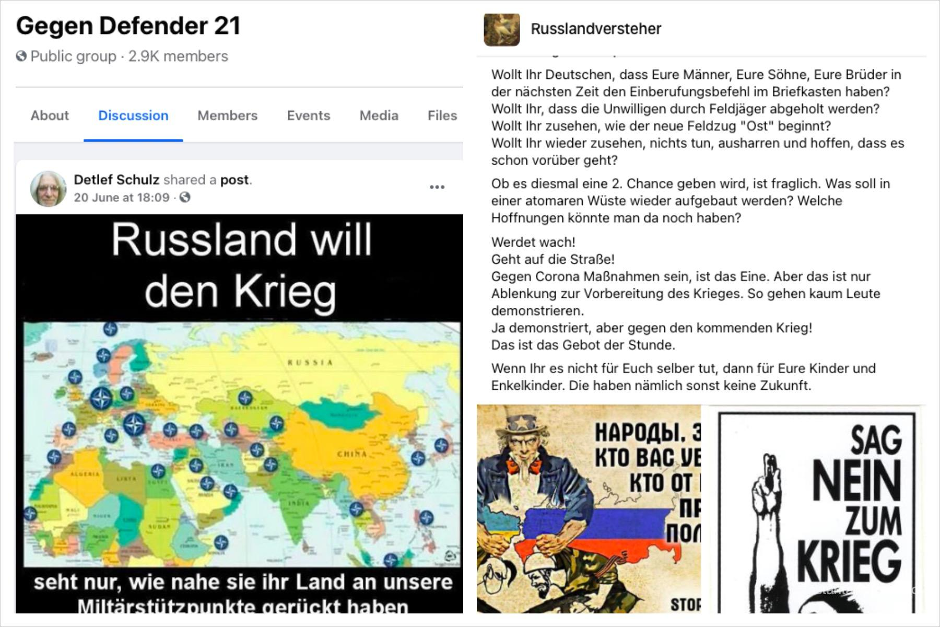 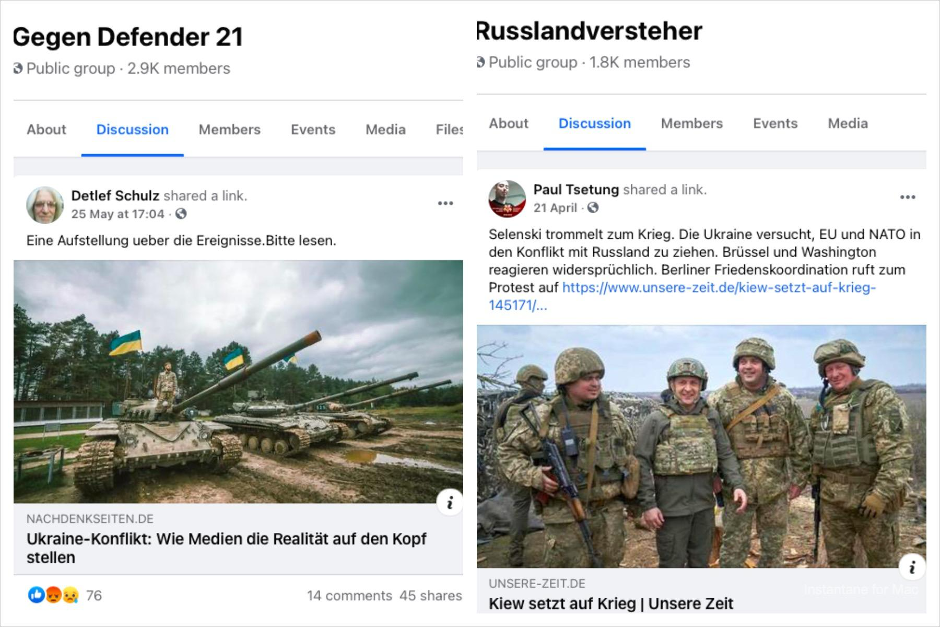 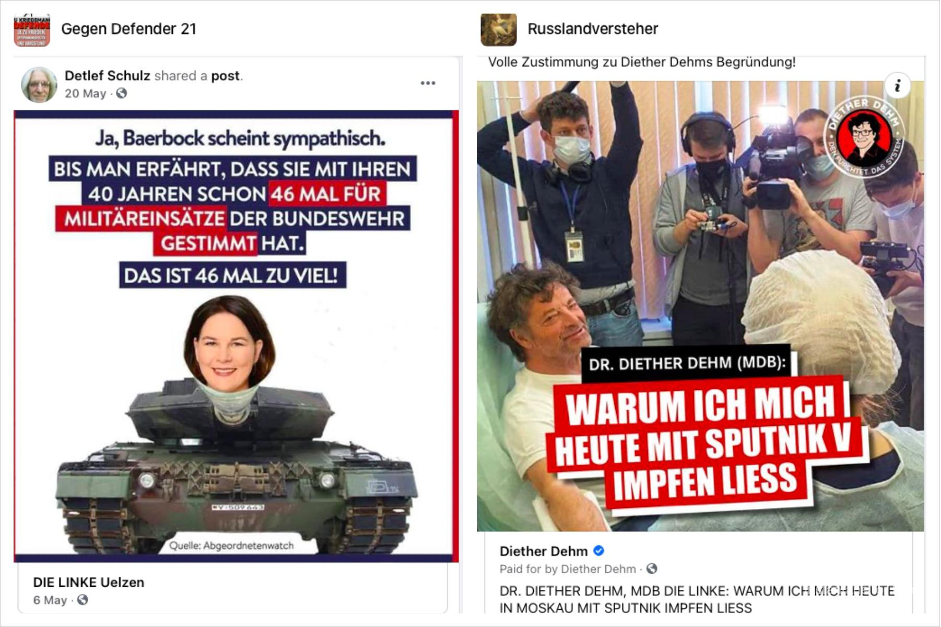 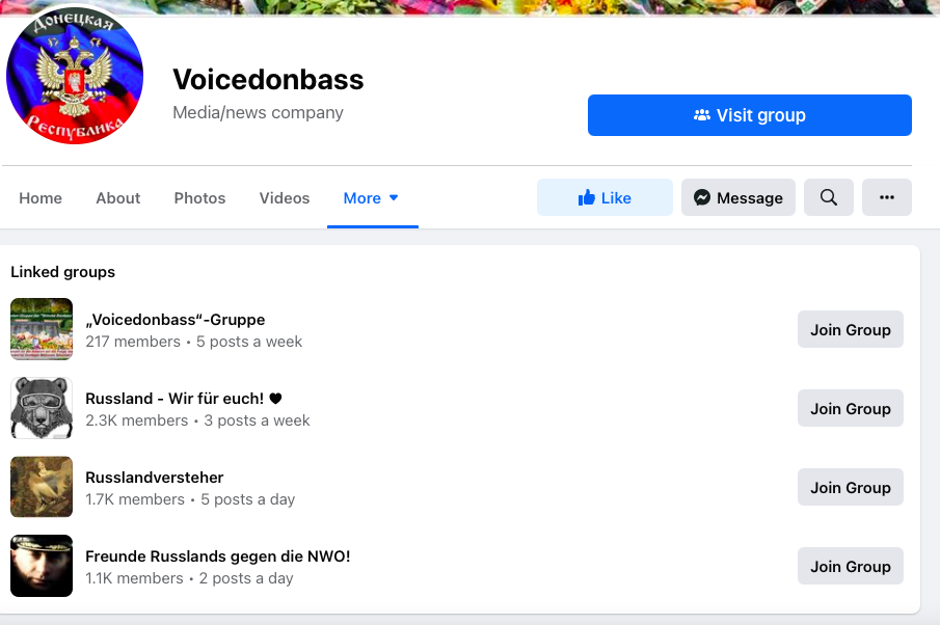 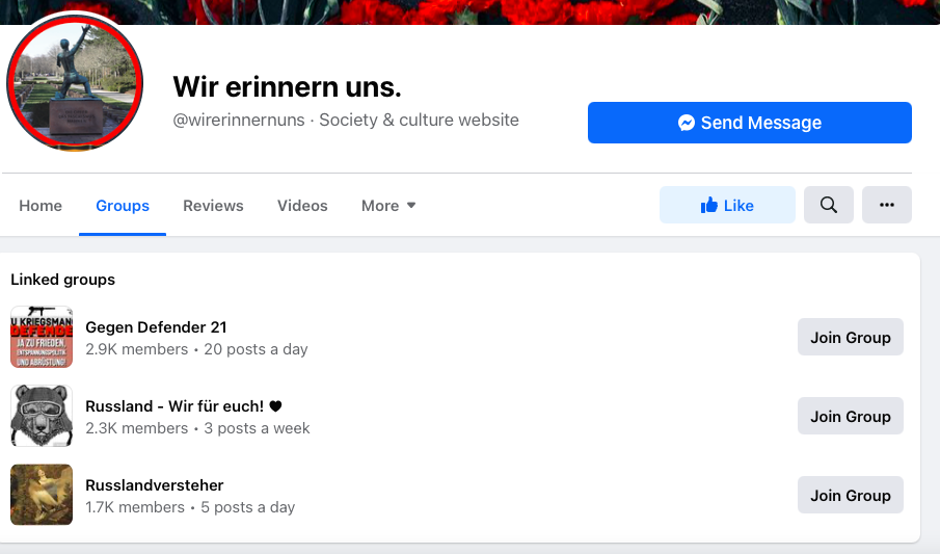 UkraineWorld also studied reposts of the content from Voicedonbass and Wir erinnern uns. We discovered that posts from these pages were shared to many more German pro-Russian groups by two accounts: Frank Ingo Gottschlich and Olga Malzev. While the second account is most likely authentic, the first one seems to be a troll, since it has very few friends and its profile picture has very poor image quality and was likely downloaded from somewhere else. 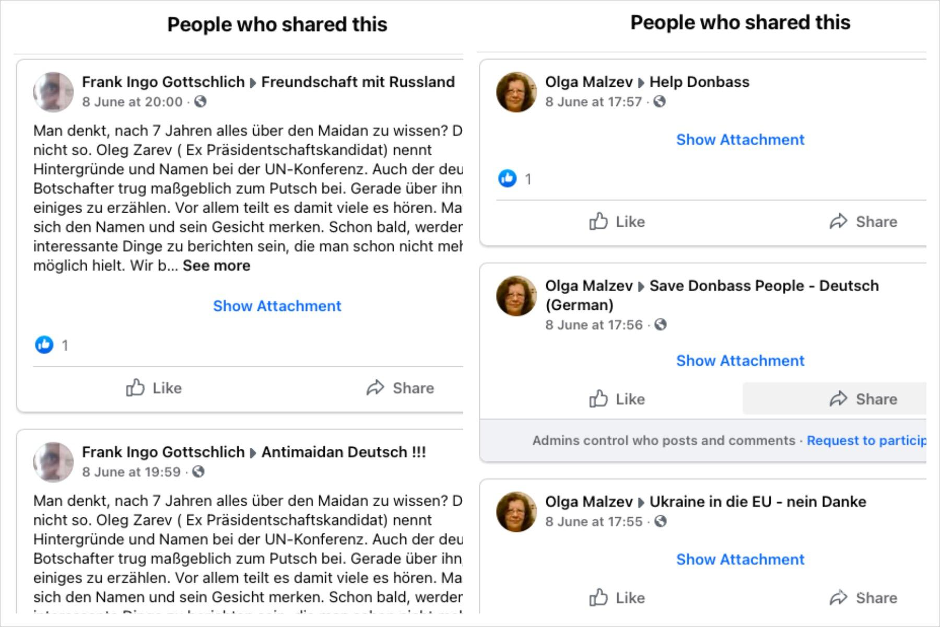 While studying these reposts, UkraineWorld has discovered 15 pro-Russian Facebook groups in German language. We analyzed them via CrowdTangle, a public insights tool owned and operated by Facebook.

Posts in these 15 groups have received 182.3 thousand interactions (likes, comments and shares) since the beginning of 2021. In particular, the posts were shared 29.8 thousand times, which means that the reach of the content published in these groups has been amplified significantly. Furthermore, posts in these groups tend to draw “angry” or “sad” reactions. 16.6 thousand reactions were “angry”, and 7.1 thousand reactions were sad. Provoking anger and desperation are among the most widespread tactics of Kremlin propaganda. 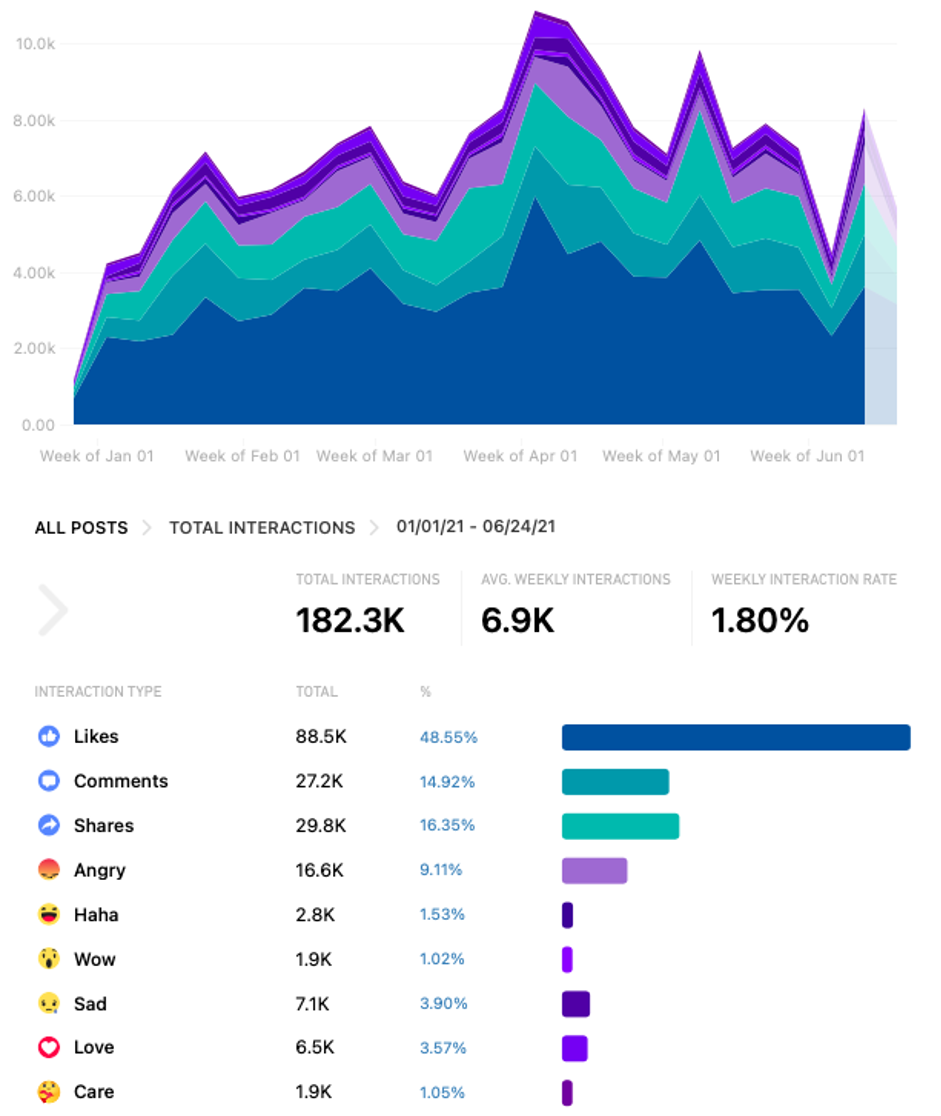 The content of these groups is very similar to Russlandversteher and Gegen Defender 21: 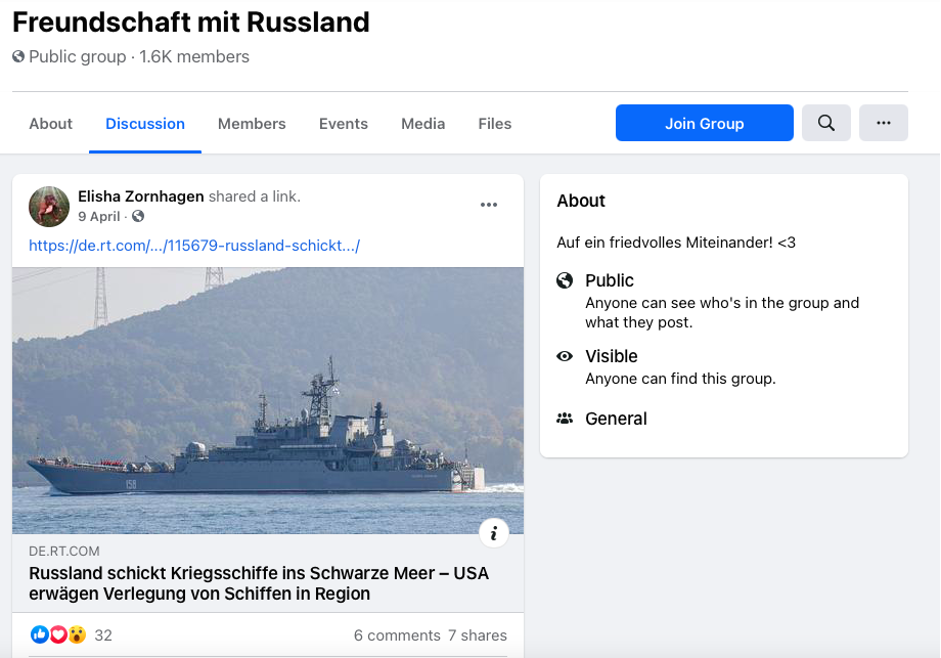 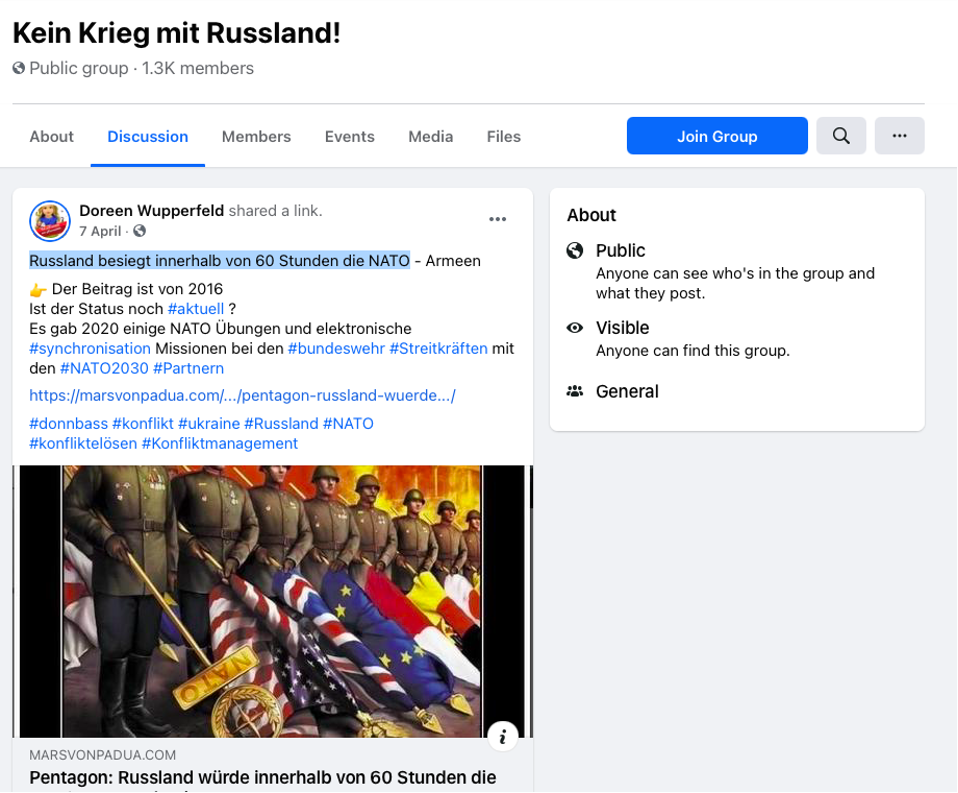 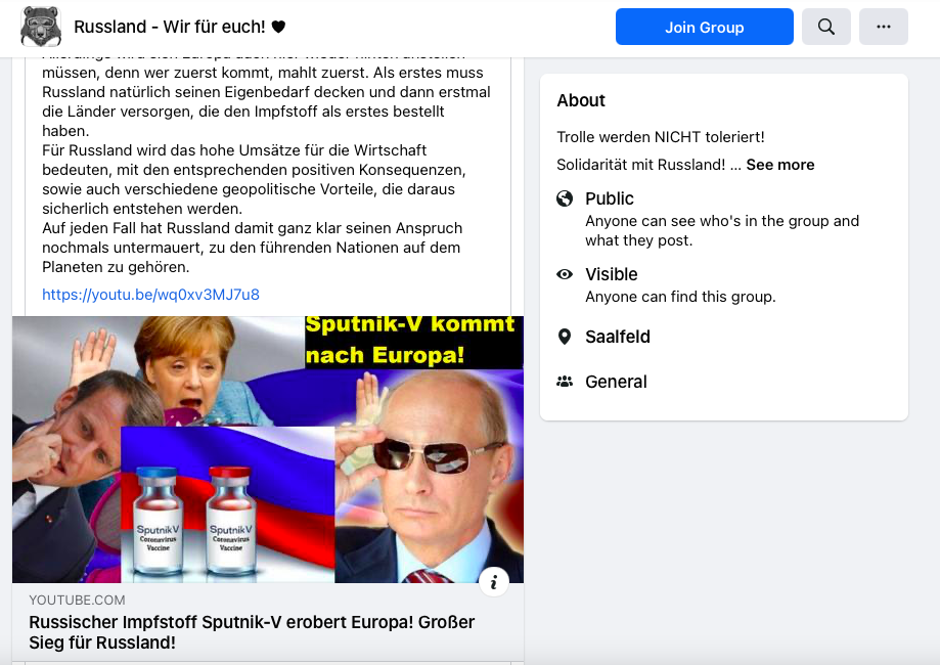 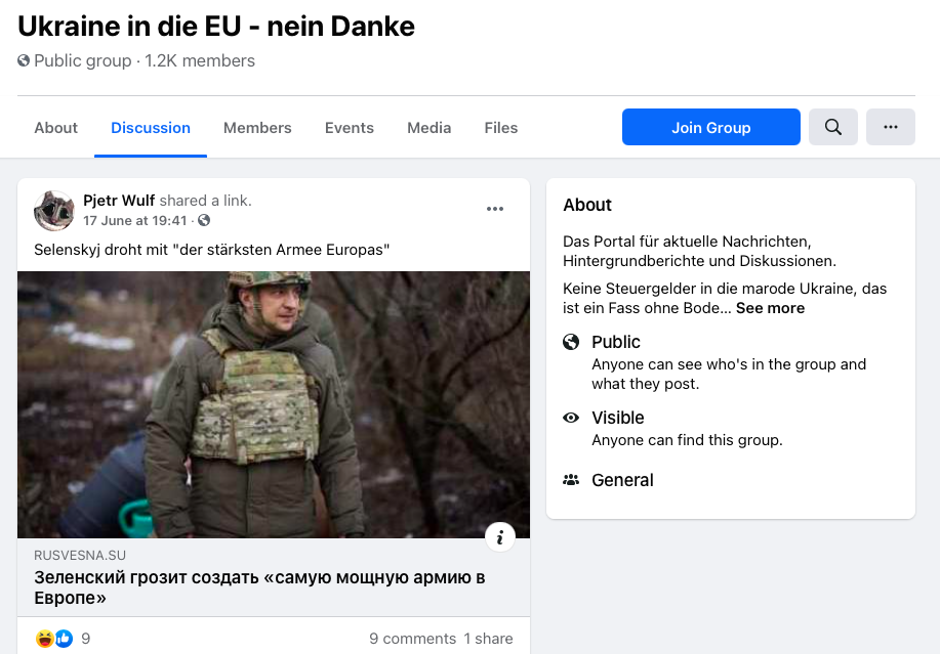 Pro-Russian actors employ a strategy of “decentralized influence” in the German segment of Facebook. This means that there is no single centre of influence, but rather many small ones. However, although some of the groups and pages we discovered may have quite small audiences (under 1 thousand group members or page likes), their combined reach is significant.

Pro-Russian messages mostly appear on public pages and are then spread to multiple groups by several accounts. This strategy allows for the quick and efficient distribution of pro-Kremlin messages among German-speaking Facebook users who may be receptive to Russian narratives. While gaining this access, pro-Russian actors try to persuade their audience that the U.S. and NATO are the real aggressors, and that Germans should thus favor ties with Russia.

This is also why the Kremlin supports German parties which advocate against the existing democratic order in Germany such as Die Linke and the far-right Alternative für Deutschland. The Bundestag elections scheduled for September 26, 2021 will show whether the strategy has borne any fruit.

President Zelensky's party "Servant of the People" failed to curb the power of local mayors in Ukrainian local elections on October 25th. Why did this happen, what...
VIDEO
January 13, 2020