“Refugees are Not Welcome” - How Russian Propaganda Lies about Ukrainian Refugees

January 18, 2023
Russian propagandists continue to lie about the reality of life in Ukraine and in the West in numerous capacities. 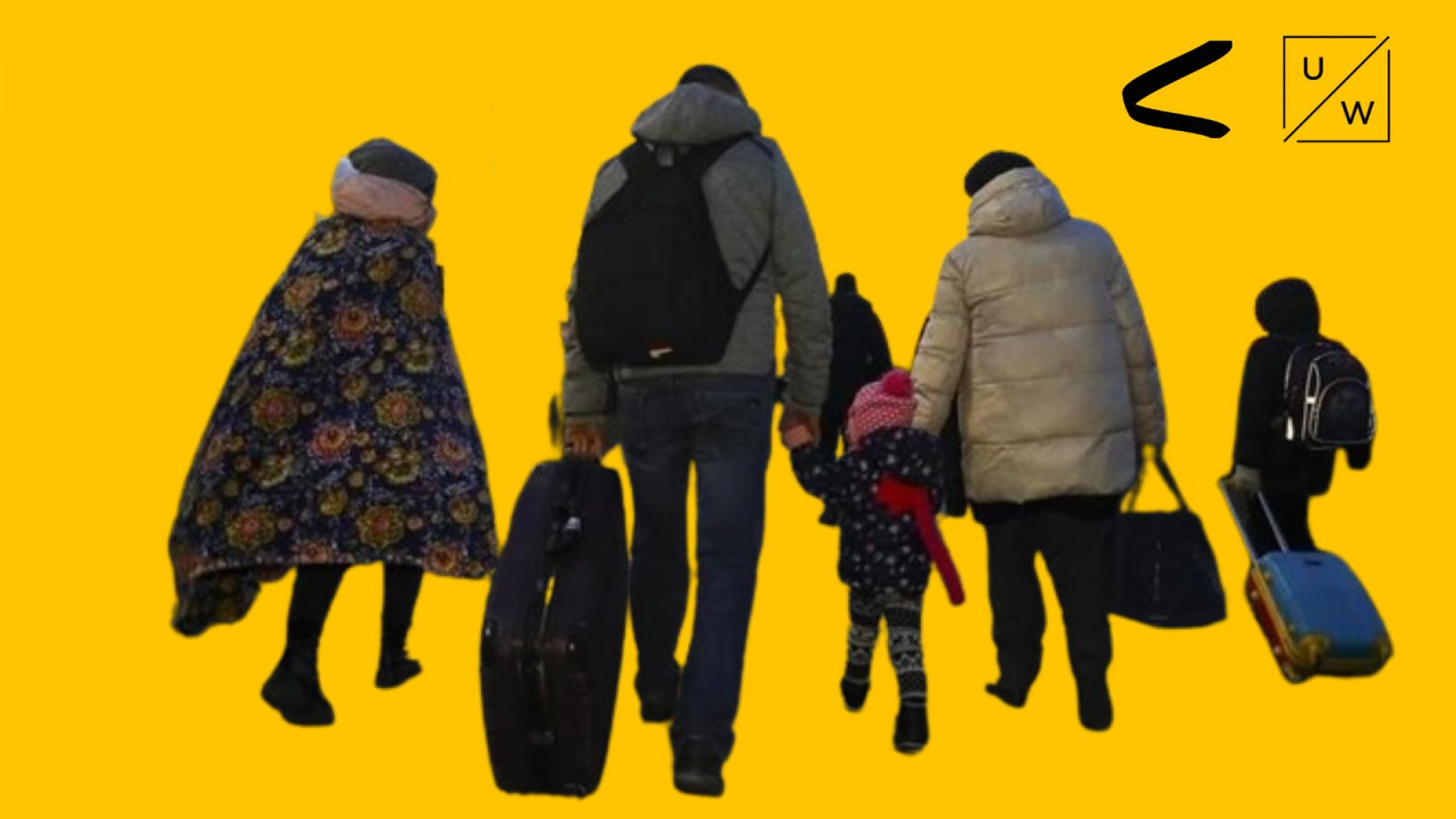 Therefore, they of course did not neglect the topic of Ukrainian refugees in the EU countries.

After the beginning of the full-scale war in Ukraine on 24 February, 2022, millions of Ukrainians had to leave their homes for  other parts of the country or even abroad. While people were escaping from Russian bombs and occupation, and countries were providing them with shelter, Russian propagandists began creating new narratives about Ukrainian refugees.

"The EU is tired of Ukrainian refugees" is perhaps the most prominent narrative Russian propaganda has created. In this respect, propagandists try to strengthen general anti-Western rhetoric in Russia and show the West as "unprincipled" and "weakened by of anti-Russian sanctions." 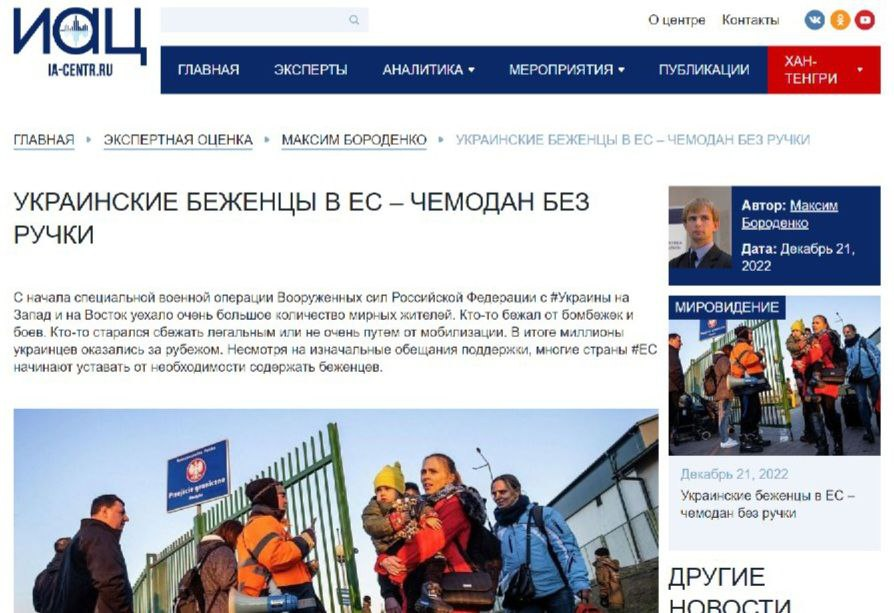 Therefore, this larger narrative can be analyzed from the several perspectives.

Firstly, Russia is trying to portray Ukraine as a "failed state" and an "indisputable" part of Russia. The message about Ukrainian refugees that are "left" in Europe in spite of "the West's promises" comports with the larger Russian narrative in that Russian propagandists are also trying to portray Russia as the only chance Ukrainians have to receive help and shelter. In addition to showing different stories of people who accepted Russian passports and went to Russia "living the best life", Russian propagandists are also sure to includeanti-Western rhetoric. Thus, they accuse the West of creating "humanitarian catastrophe"  as well as of "blocking possibilities for Ukrainians from Eastern and Southern regions to seek shelter in Russia because of russophobia." 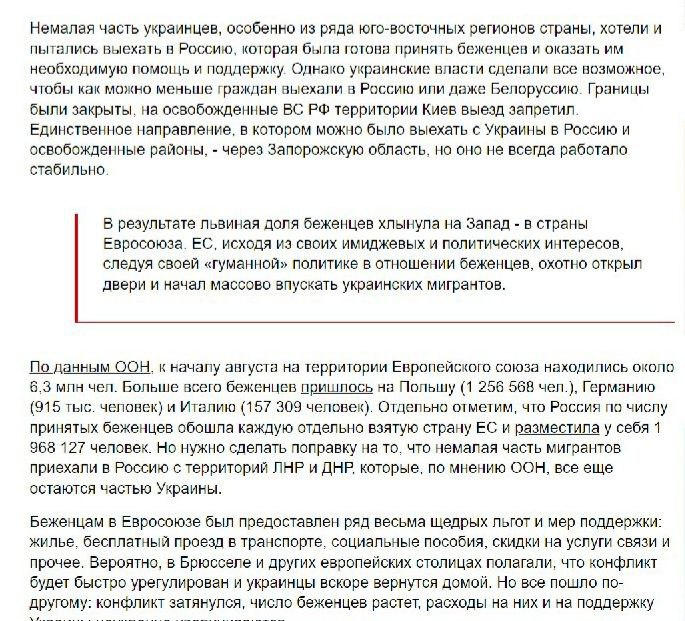 In addition, when , describing the situation for Ukrainian refugees in the EU, Russian propagandists point to "a  decrease in the West's interest in Ukrainians" caused by a "desire by the West to support the war in Ukraine and destroy Russia" and "invest in the Ukrainian army, not refugees."

Another key point in Russia's propaganda narratives is the attempt to show the West as "racist" and "inclined to support Ukrainians more than other refugees." This message also aims to portray the West as "interested in prolonging war in spite of people's lives." 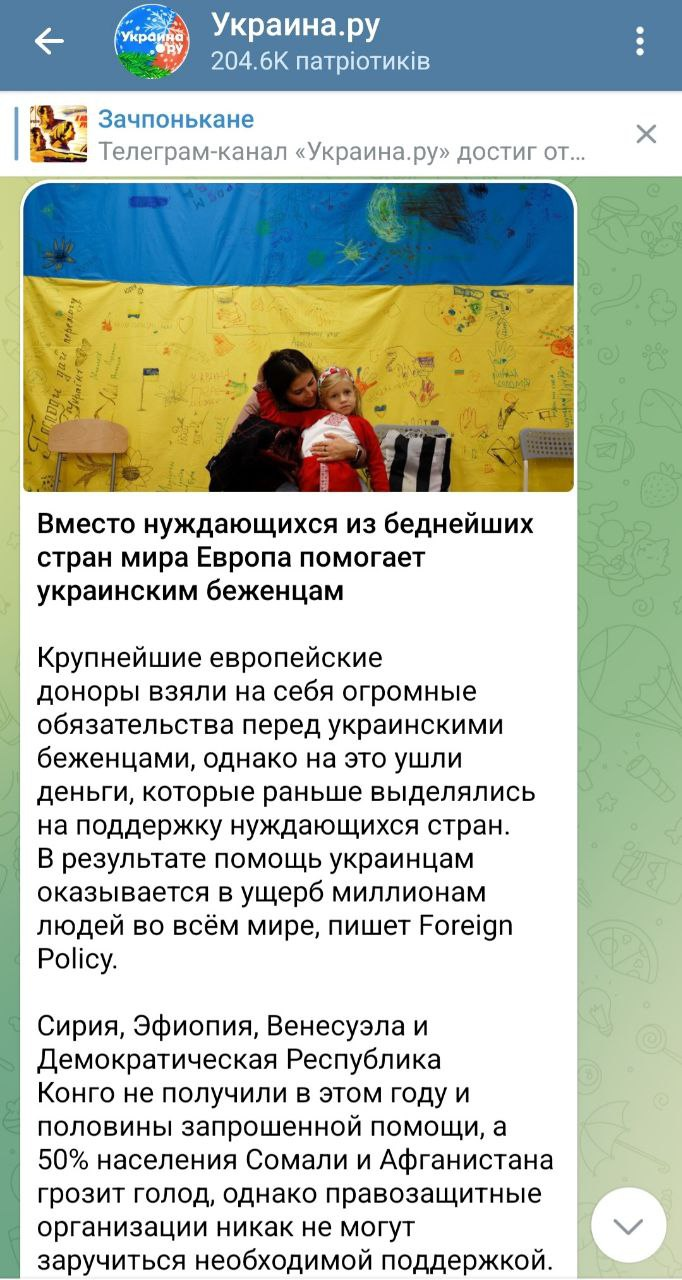 Continuing the narrative of "Ukrainians that are not welcome in the West," Russian propagandists appeal to "intolerance towards Ukrainians by EU residents who are suffering from sanctions" and who thus blame Ukrainians for their own plight. This message compounds with other previous anti-Western narratives, as well as builds an understanding in Russia that  "Ukraine isn't getting support," and that Russia is thus " outplaying its opponents." 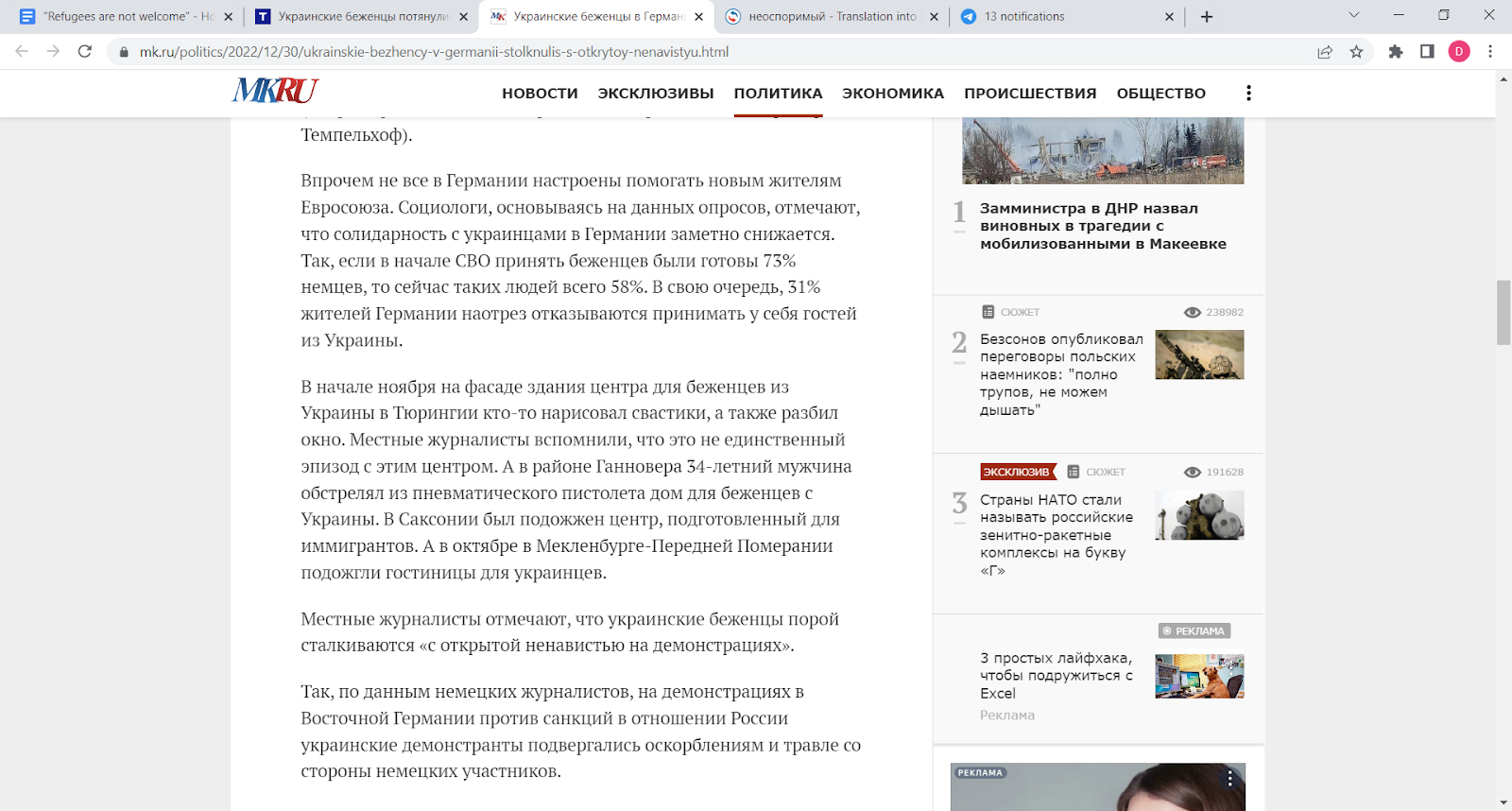 However, Russian propagandists also go beyond anti-Western rhetoric in their narratives about Ukrainian refugees. They also dehumanize Ukrainians seeking shelter from the war. One of the major messages here is accusing Ukrainians of "wanting to rob EU countries" and "getting everything for free." 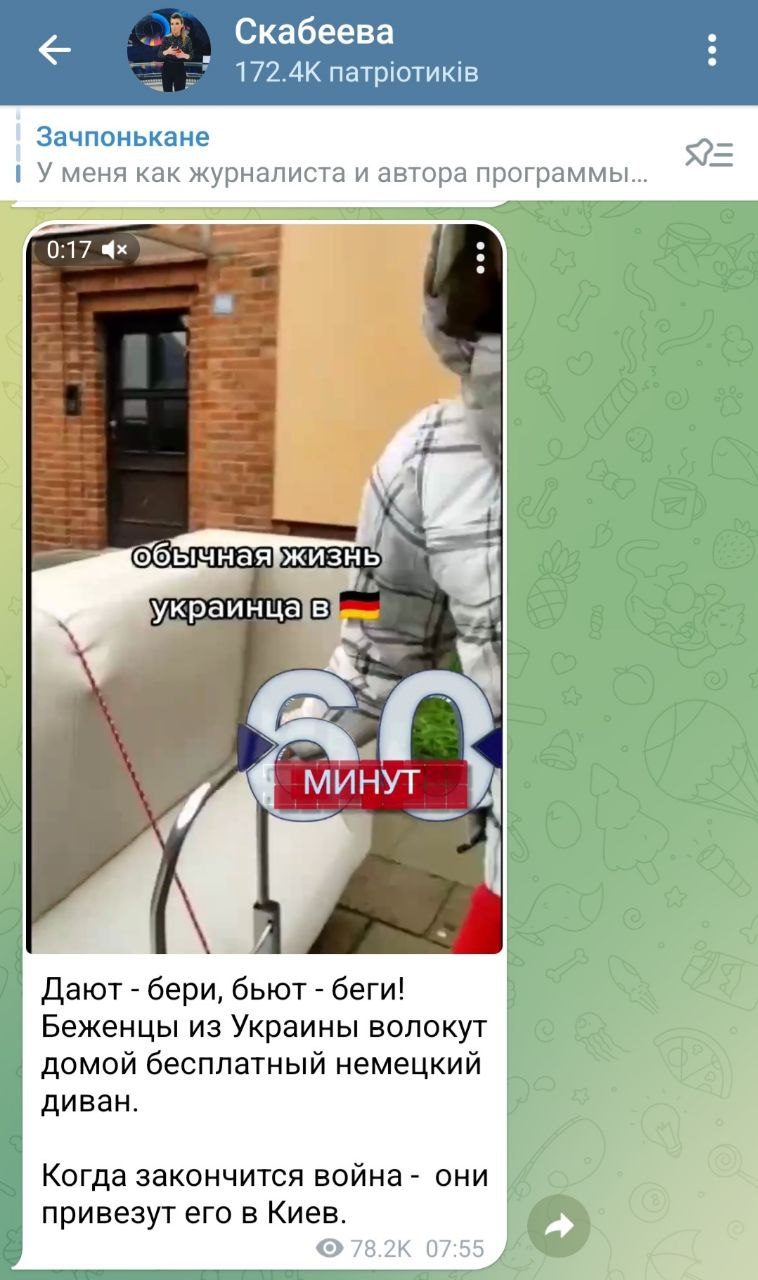 Russian propagandists also share messages that are sometimes repeated by different pro-Russian opinion leaders and activists abroad that "Ukrainians, actually, were not in danger in Ukraine" and their only motivation is to come to the EU to "get social benefits and steal from European taxpayers who feel consequences of anti-Russian sanctions". In this way, they are aiming to construct the image of Ukrainian refugees as "frauds" who violate legislation, don`t want to integrate and work in the welcoming countries and, actually, are just "getting benefits from the war". Except for decreasing the public support for Ukraine and showing the fictional reality where the West is suffering from sanctions, this message has also an essential function of rejecting war crimes committed by Russia in Ukraine and dehumanising people who had to leave the countries because of the Russian invasion. 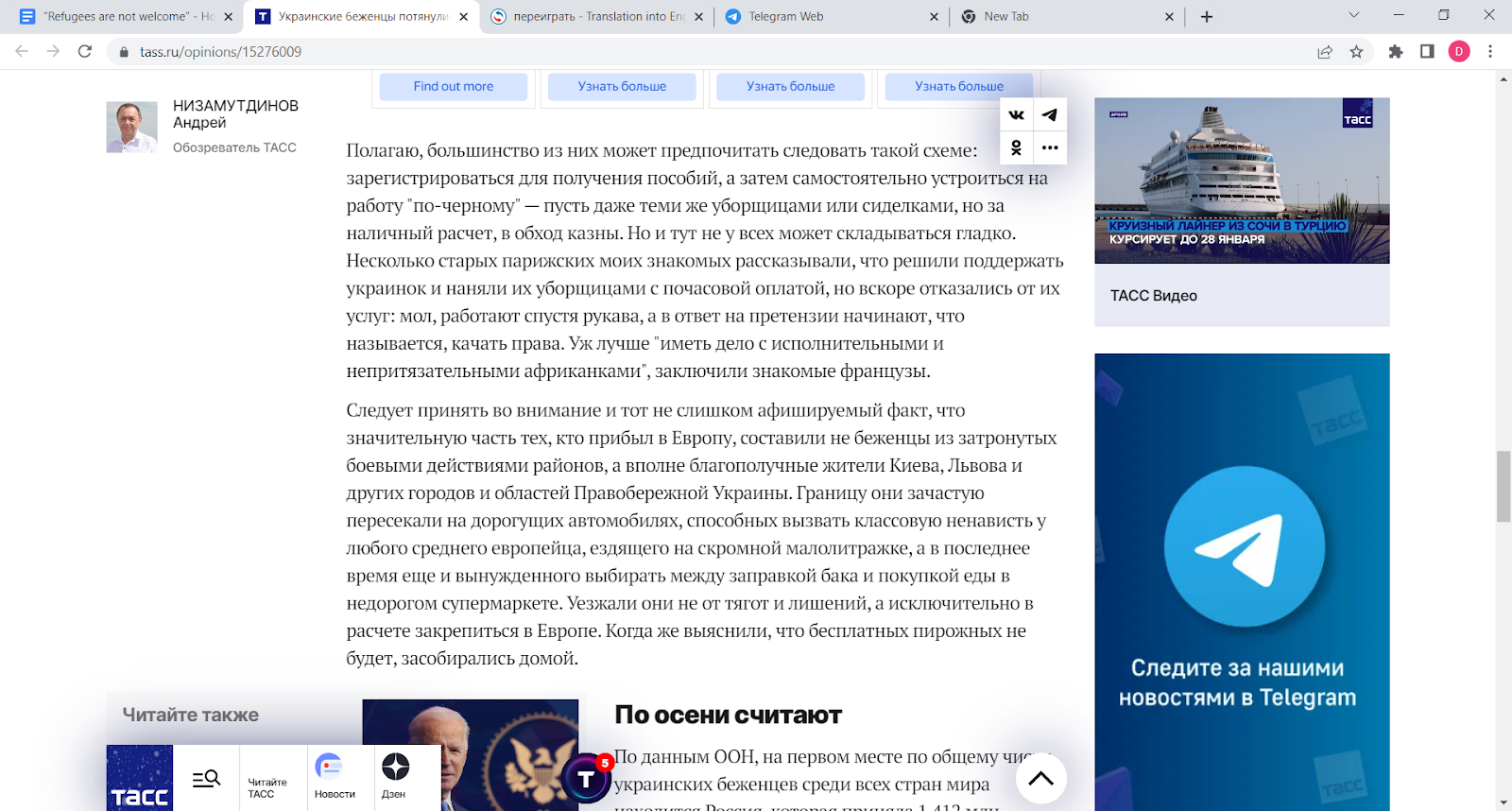 Overall, Russian propaganda aims to create a reality in which Ukraine is getting less support and Ukrainians are either being left behind or benefiting from the war and the "opportunity to live in the EU." However, everything is done in a "traditionally Russian" way: they blame - the West for the war, dehumanize of Ukrainians who fled the war, and legitimize war crimes. While approximately 136 000 residences have been damaged or destroyed as of September 2022, 6 919 civilians have been killed and 11 075 injured between 24 February 2022 and 2 January 2023 (not counting the many places where data is not available), and cities like Bakhmut, Zaporizhia, Kharkiv, Izium, and Kherson are under constant bombardment, Russia continues to claim that "Ukrainians are not in danger." As usual, Russian propaganda manipulates people's tragedies to inflate their own fictional power.

Ukraine’s Resistance to Energy Attacks: Now and in the Future