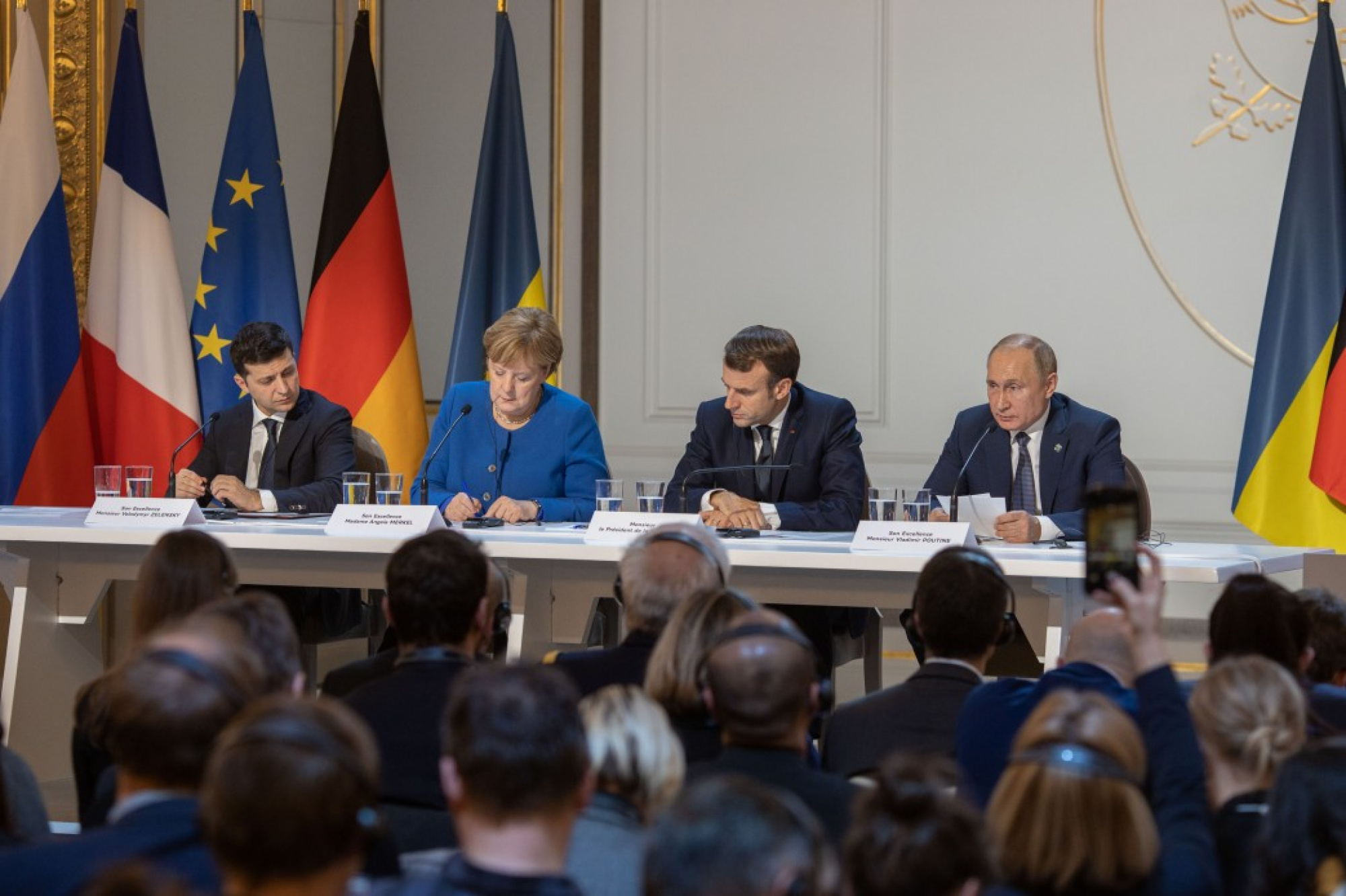 The meeting has revived the "Normandy Format", aimed at finding a peaceful settlement to  the Russian-Ukrainian war in Donbas. The 9 December meeting was the first since 2016.

Despite hopes that this meeting would lead to progress in peace talks, the final press conference of the four leaders raised more questions than answers. The devil, as usual, is in the details.

Let me discuss some of those details.

Control of the border

One of the key questions that arise around the Minsk agreements today are related to the question of the border. When will Ukrainian government eventually get control over its border with Russia, now controlled by the so-called pro-Russian "republics" and Russia itself?

The Minsk-2 agreements (concluded under Russian military pressure in February 2015) state that Ukraine gets control over the border only after the holding of elections in the "republics". Russian President Putin stressed this unequivocally during the 9 December press conference. His motivation is clear: this formula gives Russia full freedom to shape the result of the election on the now occupied territories according to its wishes.

However, Ukrainian President Volodymyr Zelensky has repeatedly said (both recently and during the December 9 press conference) that he wants the border question to be re-addressed. On the eve of the election Ukraine should have de facto full control over the Ukrainian-Russian state border, he says.

This Ukraine-Russia controversy is able to remain a point of discord for a long time to come. It is still unclear how Kyiv and Moscow will find a compromise on this issue.

It is still unclear how Kyiv and Moscow will find a compromise on control over the border.

But control over the border, however symbolic it might sound, is only one piece in the puzzle. Imagine if Russia agrees on "concessions" and Ukraine indeed gets control over the border just on the eve of the election, but without any transition period. This would still mean that the whole process of organizing the election would still be in Russian control. And the outcome of this process would most-probably be pro-Russian.

But then this outcome will be immediately "secured" by the "special status" to the now breakaway regions, to be applied, according to the famous Steinmeier Formula, provisionally on election day, and on a permanent basis after the OSCE has issued its report.

This situation will leave Ukraine in a trap: although it will get "control" over the border before the vote, Russian will still have full influence on its "Trojan horse" in the Ukrainian political body by shaping the outcome of the election and securing its influence with the auspices of "special status" powers.

Another big issue is the so-called "special status" of Donbas lands. This issue was not very  present during the Paris press conference, but it is one of the key issues of the Minsk process.

The position voiced by the Ukrainian president and the members of his team on the eve of the Normandy meeting is that the "special status" for the currently occupied territories will actually mean Ukraine's typical "decentralization" (applicable for all other regions) PLUS some minor additions for Donbas.

A few words about the context: decentralization is one of the most successful Ukrainian reforms conducted since 2014. Ukrainian local communities and regional self-governance bodies receive more funds and powers than before, and this boosts their growth. Enlarging this reform to the currently non-government-controlled territories is an understandable move that can stimulate growth and give these lands more self-governance.

But what will be included in these "minor additions" to be added to the typical "decentralization" provisions? What if it includes the law-enforcement segment (police, judiciary, prosecutor's office, etc.). In this scenario, the now occupied regions of Donbas will get "autonomous" police, prosecution, judges, security service which they will fully control. If this scenario takes place, Ukraine risks losing its sovereignty over these regions as any anti-Kyiv moves here will be supported by the local "law-enforcement" forces.

So, "special status" can be very different, and we should look at this very carefully too.

Another important issue is related to the geopolitical context.

Russia fears Ukraine's integration into NATO and so pushes the Western counterparts of the Minsk process to move Ukraine back to "non-aligned status" and neutrality.

This was not discussed during the Paris press conference but the idea is in the air and can be raised in coming months. The Russian idea of pushing Ukraine towards "non-aligned status" can find fertile ground in Macron's unwillingness to proceed with EU enlargement in the Balkans and his diagnosis of NATO as being "brain dead".

In this context, let's not forget that Ukraine has already experienced this before. In April 2008 NATO was reluctant to give Ukraine and Georgia NATO membership Action Plans in the hope that this will stop irritating Russia. It didn't, and the decision by NATO brought even less security to the region.

Georgia fell victim to Russian aggression in 2008, Ukraine in 2014, when Crimea was illegally annexed and Russian troops appeared in Donbas. Moldova, another post-Soviet country with pro-Western orientation, has had non-aligned status since mid-1990s. But it never helped it solve the Transdnistrian conflict maintained by Russia. It only fueled Russian appetites.

All these details are much more than details. They can be decisive factors that determine which direction the process will go. It is in those details, as is well known, that the devil dwells.

Host Volodymyr Yermolenko welcomes two experts of the Ukrainian Institute for the Future: Pavlo Klimkin, Minister of Foreign Affairs of Ukraine from 2014 to 2019,...
Belarus
May 24, 2021

Read a new issue of bi-weekly newsletter with monitoring of Russian activities and influence in Belarus to know more.